If you are having problems accessing today’s e-Edition, please click on this link VIEW E-EDITION
By Schuyler Dixon The Associated Press
November 29, 2018 - 9:05 pm 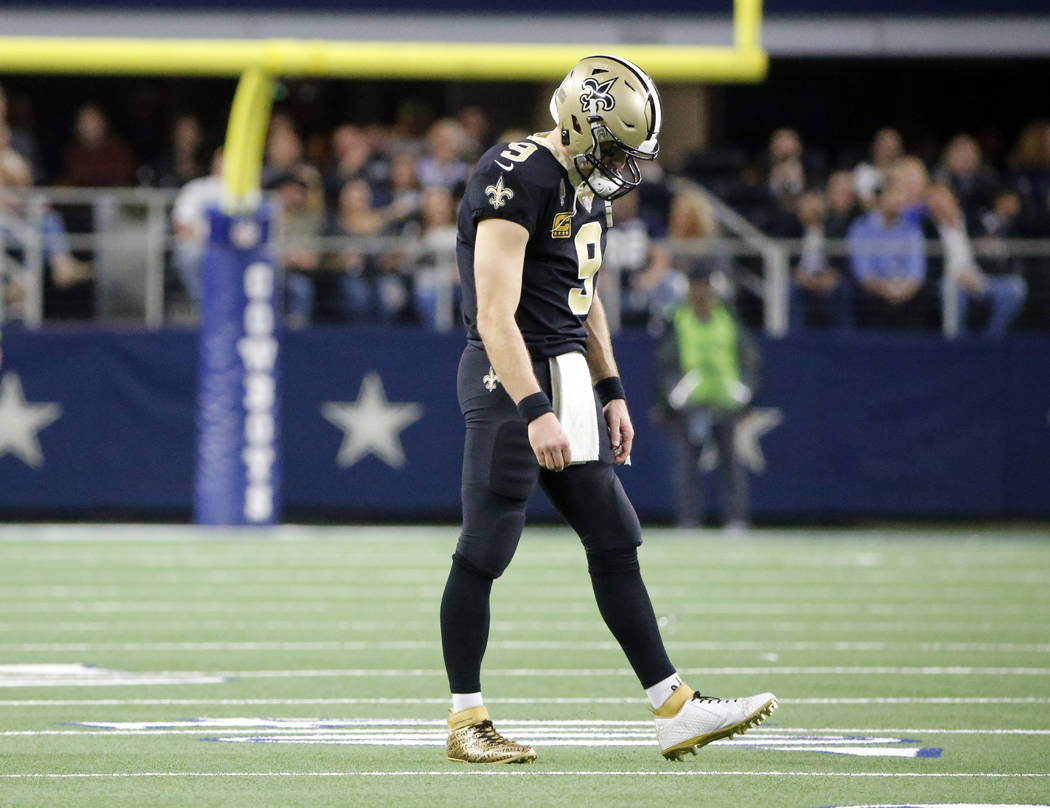 New Orleans Saints quarterback Drew Brees (9) walks off of the field in the first half of an NFL football game against the Dallas Cowboys, in Arlington, Texas, Thursday, Nov. 29, 2018. (AP Photo/Michael Ainsworth) 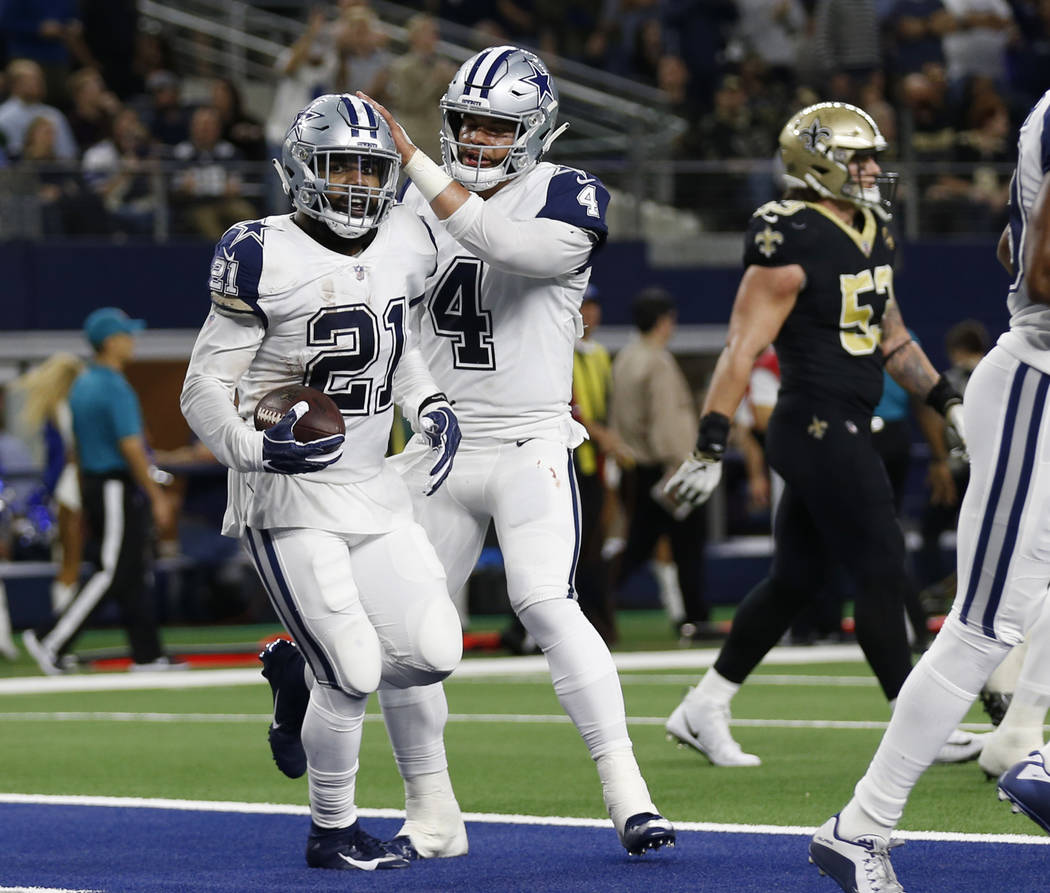 Dallas Cowboys running back Ezekiel Elliott (21) celebrates his touchdown against the New Orleans Saints with quarterback Dak Prescott (4) in the first half of an NFL football game, in Arlington, Texas, Thursday, Nov. 29, 2018. (AP Photo/Michael Ainsworth) 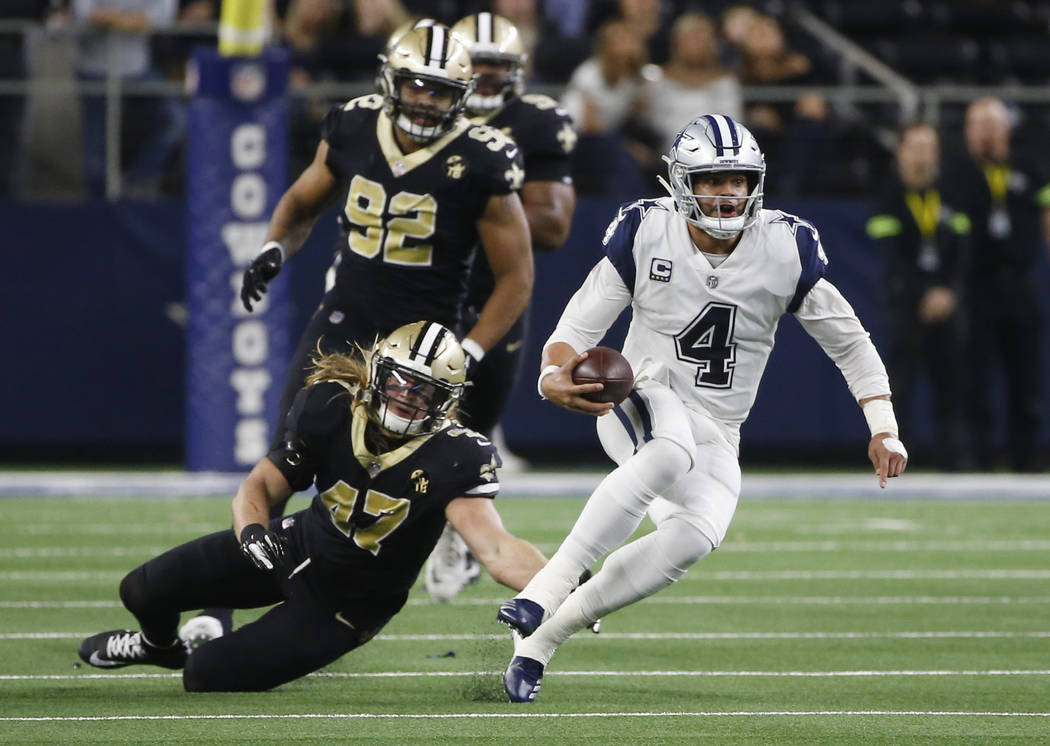 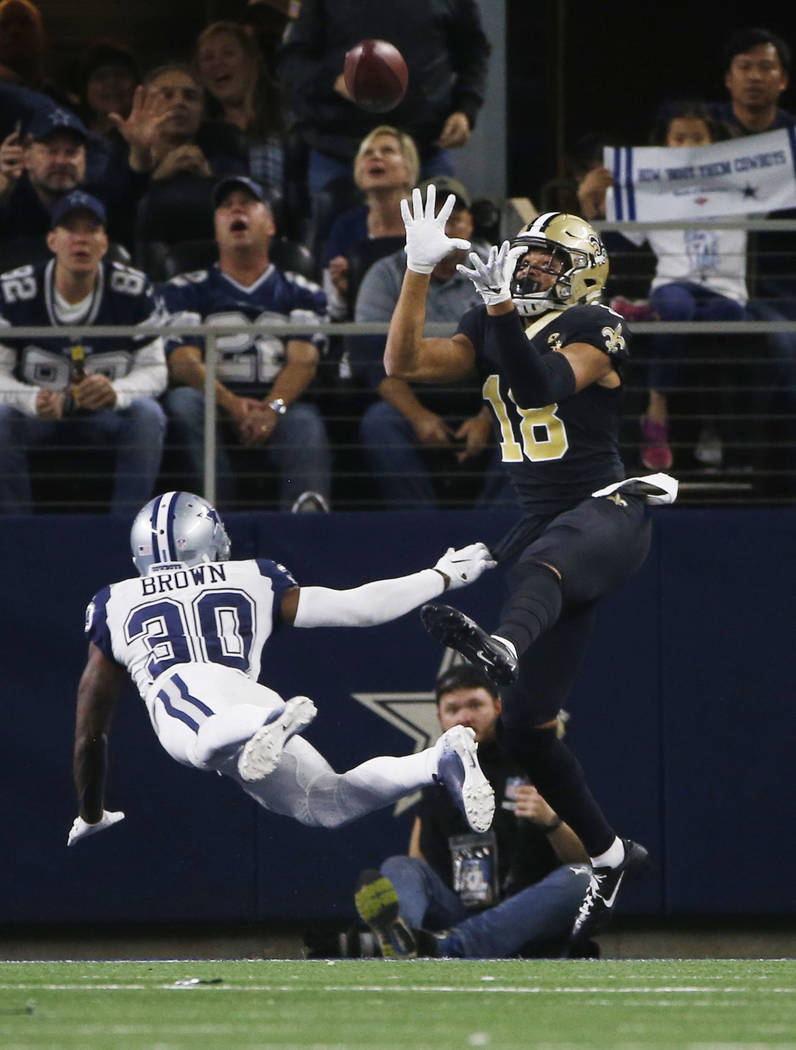 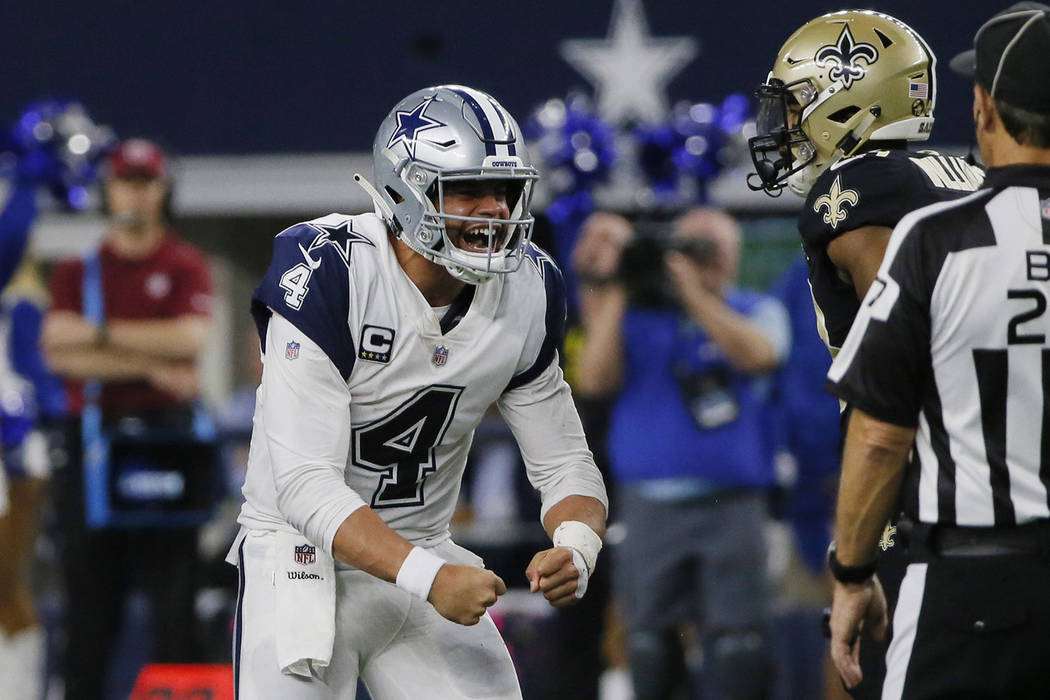 ARLINGTON, Texas — Dak Prescott desperately scrambled for a first down in a game of fourth-quarter keepaway, then took three knees from the New Orleans 1 to run out the clock by the narrowest possible margin.

Anything to keep Drew Brees and the NFL’s highest-scoring offense on the sideline.

Ezekiel Elliott scored the only Dallas touchdown on a 16-yard screen pass and the Cowboys stifled Brees and the Saints, ending New Orleans’ 10-game winning streak with a 13-10 victory Thursday night.

The Cowboys (7-5) won their fourth consecutive game and assured they will at least remain tied for the NFC East lead.

The Saints (10-2) were shut out in the first half, had their fewest points in four years and finished with a season-low 176 yards. They missed a chance to perfectly match Dallas from two years ago, when then-rookie sensations Elliott and Prescott won 11 straight after dropping the opener.

Brees had his fewest yards passing in a first half since joining the Saints in 2006 with 39, and couldn’t get a potential winning drive going in the final minutes.

Instead, Jourdan Lewis’ interception — just the third for Brees while he became the NFL’s first with at least 30 TD passes in 10 seasons — gave the Cowboys a chance to run out the clock from the New Orleans 1 after an interference penalty in the end zone.

“The biggest thing we tried to do was focus on ourselves and play the way we’re capable of playing,” Cowboys coach Jason Garrett said. “Play sound, fundamental defense, play fast play physical, win the line of scrimmage and be a great tackling team, contest throws.”

The Cowboys spent the fourth quarter trying to protect their three-point lead, with Prescott breaking several tackles on an 11-yard scramble on third-and-10 and Cole Beasley catching a third-down pass and diving for 5 yards on third-and-5.

But Prescott fumbled on his season-high seventh sack with Dallas in position for at least a field goal, giving Brees another chance from his 15 with more than two minutes remaining.

On the second play, though, Brees threw where he expected pass-catching back Alvin Kamara to be but Jordan was the only one there. He dove forward, just keeping the ball off the ground.

Marshon Lattimore was called for interference against Amari Cooper in the end zone, giving Dallas a first down at the 1 with 1:58 remaining. The Cowboys had just enough time to end the game, with the play clock matching the game clock down to zero after Prescott took a knee for the third time.

Brees was 18 of 28 for 127 yards, actually the second straight game and third overall under 200 yards for the MVP contender. The running game didn’t do much either, with Kamara getting 36 yards rushing while the Saints had 65 as a team after averaging 177 the previous four games.

“We didn’t have the balance that we’ve had in prior games,” coach Sean Payton said. “We struggled running the ball with any consistency. We didn’t make enough happen on the first and second downs.”

The only touchdown drive for the Saints was aided by three first downs on Dallas penalties. The biggest was Randy Gregory’s roughing-the-punt penalty on Thomas Morstead.

Two plays later, Brees dropped a deep throw to a backpedaling Keith Kirkwood in the end zone for a 30-yard score to get New Orleans within 13-10.

Prescott had 194 of his 248 yards passing while helping the Cowboys to a 13-0 halftime lead — the first scoreless first half for the Saints since 2014 and their first deficit in five games.

The Cowboys held the ball for more than 21 minutes in the first half, but settled for field goals twice.

Trailing 10-0 in the second quarter, coach Sean Payton went for it on fourth-and-goal from the 1 and chose a handoff to Alvin Kamara. He was stuffed, and the Cowboys kept the ball another nine minutes on the way Brett Maher’s second field goal.

Elliott had 136 scrimmage yards with 76 rushing and 60 receiving on six catches.

After forcing and recovering Cooper’s fumble, Lattimore ran to one of the giant red Salvation Army kettles behind an end zone, pulled $23 out of his uniform and dropped it in. Lattimore is No. 23. In the Thanksgiving game a week earlier, Elliott (No. 21) dropped $21 into the other kettle on the same end of the field.

GIL BRANDT IN RING OF HONOR

The Cowboys inducted former director of player personnel Gil Brandt into the team’s ring of honor at halftime. The 85-year-old joins former coach Tom Landry and former general manager Tex Schramm, both deceased, in the 22-person group. Those three held their titles for the franchise’s first 29 years before Jerry Jones bought the team.

Jones fired Landry immediately, and Schramm resigned less than two months later. Jones fired Brandt after the owner and general manager’s first draft in 1989. Brandt has been nominated as a contributor for next year’s voting for the Pro Football Hall of Fame.

New Orleans DT David Onyemata had his first two sacks of the season in the first half. … Kirkwood’s TD was the second of his career, and second in as many weeks. … The Saints were shut out in the first half for the first time since the Cowboys did it in a 38-17 victory four years ago.

Saints FB Zach Line was evaluated for a concussion in the second half. … Kamara went into the sideline tent after taking a hit to the helmet from Jaylon Smith in the fourth quarter.

Saints: At Tampa Bay on Dec. 9 in second of three straight road games.