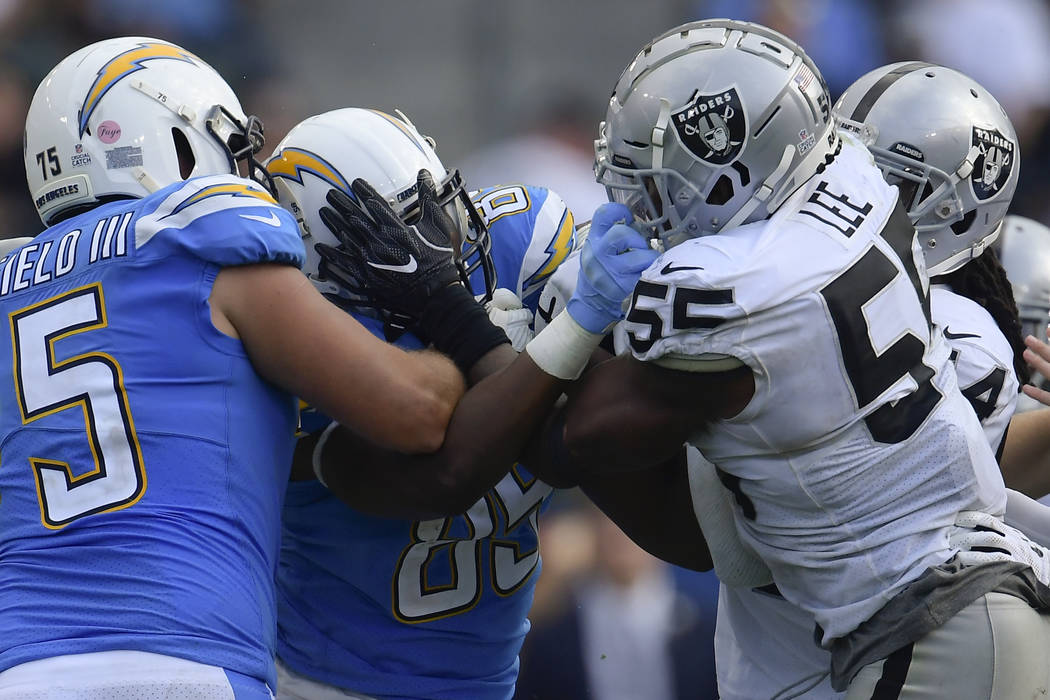 Paul Guenther did not name names.

On a long gain off a screen pass last Sunday, the Raiders defensive coordinator said this week that one of his linebackers blitzed who shouldn’t have. A quick gander at the film footage reveals that player to be inside linebacker Marquel Lee, who rushed between center and left guard on a 34-yard reception by Los Angeles Chargers running back Melvin Gordon.

Lee, a 2017 fifth-round pick, is still growing into the NFL and Guenther’s scheme. The Raiders have demonstrated a commitment to that growth process by giving him substantial playing time.

In that, Lee is a rarity.

The Raiders are leaning on their 2018 rookie class this season, but they selected 25 defenders in the previous five drafts. Lee is one of four on the 53-man roster today and the only such defender who played more than 13 defensive snaps last weekend. The dynamic contextualizes the club’s 1-4 record entering Sunday’s matchup with the Seattle Seahawks at Wembley Stadium.

Oakland has allowed 29.8 points per game, third-most in the NFL. It has allowed 6.83 yards per play, second-most in the league. It forced one turnover in its four losses, hence the Raiders’ offense on average had a starting field position of their own 22.1-yard line in those games.

These are the consequences to largely missing in the draft and trading the home-run pick. Defensive end Khalil Mack, shipped to the Chicago Bears last month, was a 2014 first-round pick.

So, here the Raiders are.

Keeping Lee company, cornerback Gareon Conley (2017 first-round pick), safety Karl Joseph (2016 first) and defensive end Shilique Calhoun (2016 third) are the only other defenders on the Raiders’ 53-man roster who were drafted before this April.

Guenther has expressed a desire not to overload Conley’s plate, given he missed all but two games as a rookie to a shin injury. Before a Week 3 hamstring ailment, Joseph was reduced to a reserve role. He remained inactive Sunday. Calhoun was a healthy scratch.

Lee has played 189 defensive snaps this season, second-most among linebackers behind Tahir Whitehead.

On Tuesday, Guenther said he has “done some good things.”

“I’m sure there are a couple plays from the other day that he’d like to have back, but that’s everybody,” Guenther added. “He’s done good. He’s progressing in the right direction. Obviously, he is playing a lot now, so we are counting on him.”

This April, in his first draft, the team took three defensive linemen who now handle significant roles. Defensive tackles P.J. Hall and Mo Hurst were selected in the second and fifth rounds, respectively. Defensive end Arden Key was chosen in the third.

All have flashed at various moments.

The Mack trade provided capital to continue the effort to build the Raiders’ defense through the draft.

Last year, the Raiders added a defender in the first three rounds. Safety Obi Melifonwu in the second and defensive tackle Eddie Vanderdoes in the third followed Conley.

Melifonwu, on injured reserve for the third time in two years, has neither demonstrated he can stay healthy nor perform. Vanderdoes, on the Physically Unable to Perform List, hasn’t practiced yet for the new coaching staff. He tore his ACL in the fourth quarter of the final game. He is eligible to play this season.

He largely has stayed healthy. Since his selection, he has been afforded an opportunity to learn and develop beside veterans like NaVorro Bowman, Derrick Johnson and Whitehead. There naturally will be mistakes, sure, amid the positives.

Unlike others, he’s on the field, able to make and learn from them.