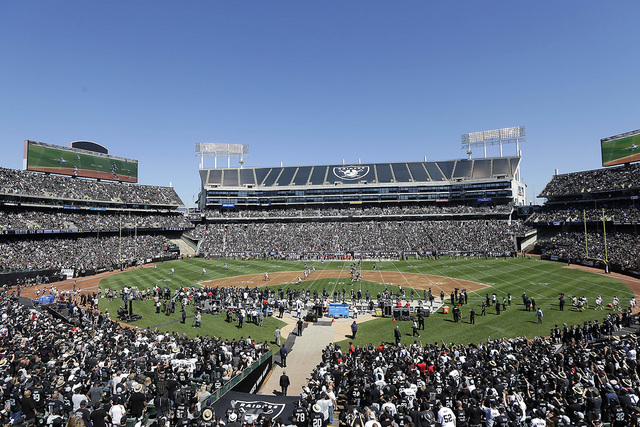 Fans at Oakland Alameda County Coliseum watch the opening kickoff during the first half of an NFL football game between the Oakland Raiders and the Atlanta Falcons in Oakland, Calif., Sunday, Sept. 18, 2016. (Jeff Chiu/AP)

Raiders owner Mark Davis said he remains “committed to Las Vegas” and is not swayed by Oakland’s attempts to prevent the NFL franchise from relocating.

Oakland Mayor Libby Schaaf said Tuesday the city has agreed on the framework for a new stadium plan. However, Davis said the Raiders are not part of that agreement.

The San Francisco Chronicle reported Oakland City Pro Football Group LLC, a team of investors led by former NFL star Ronnie Lott, met in a closed session with the Alameda County Board of Supervisors to discuss terms for selling or leasing the Oakland Coliseum, the home of the Raiders. Details of the plan, which were not made public, are expected to be presented to the Oakland City Council next week.

“The Raiders are committed to Las Vegas, and that’s what I’m working on,” Davis said.

NFL commissioner Roger Goodell met with Davis on Monday in Mexico City, where the Raiders defeated the Houston Texans 27-20 to improve their record to 8-2, best in the AFC West.

While in Los Angeles last week for a groundbreaking ceremony for the Rams’ new stadium, Goodell said he remains focused on keeping the Raiders in Oakland and the Chargers in San Diego.

In mid-October, the Nevada Legislature approved a financing plan for a 65,000-seat, $1.9 billion domed stadium in Las Vegas. The bill calls for $750 million in public funding from a Clark County hotel room tax increase. Terms of the stadium deal call for contributions of $650 million from the family of Las Vegas Sands Corp. Chairman and CEO Sheldon Adelson and $500 million from the Raiders.

Nevada Gov. Brian Sandoval signed the bill into law on Oct. 17 during a ceremony at UNLV.

Davis presented Las Vegas’ proposal at the NFL’s fall meeting Oct. 19 in Houston. Davis plans to officially file for relocation in January, and if or when it comes to a vote, the Raiders would need 24 of 32 owners to vote in favor of their move.

Andy Abboud, Las Vegas Sands’ senior vice president of government relations and community development, was in Mexico City with Davis for the Raiders-Texans game. Abboud said he spoke with Davis on Tuesday and that the team’s focus is and will continue to be relocating to Las Vegas. Abboud said Davis has called Sandoval to state that on the record.

The Review-Journal is owned by the family of Las Vegas Sands Corp. Chairman and CEO Sheldon Adelson, who are partners in the Las Vegas stadium project with the Raiders.