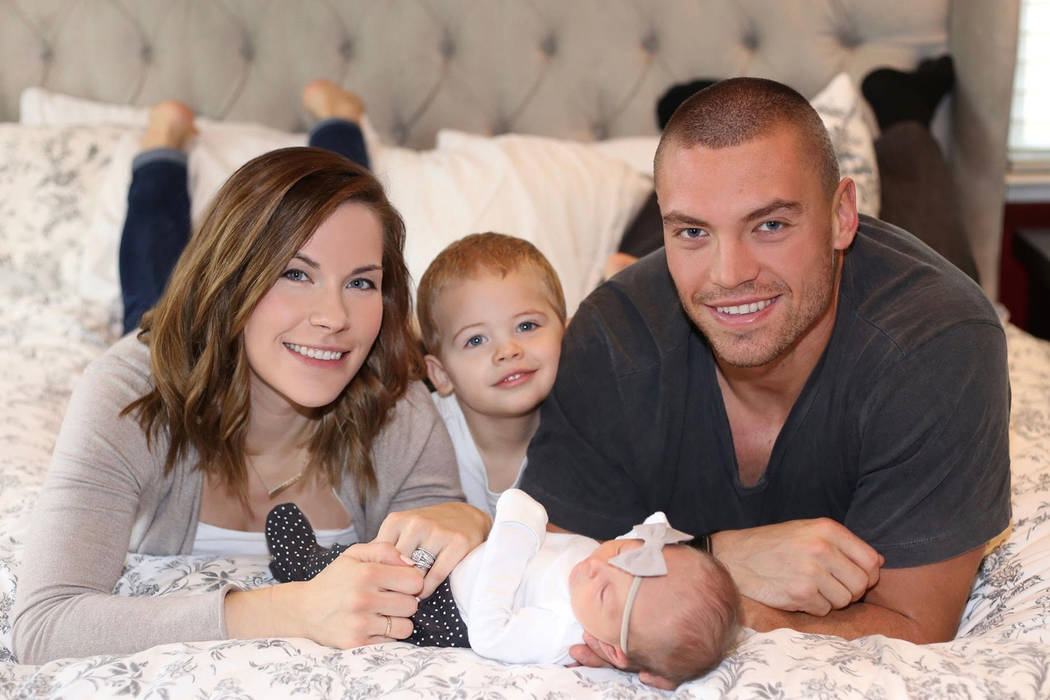 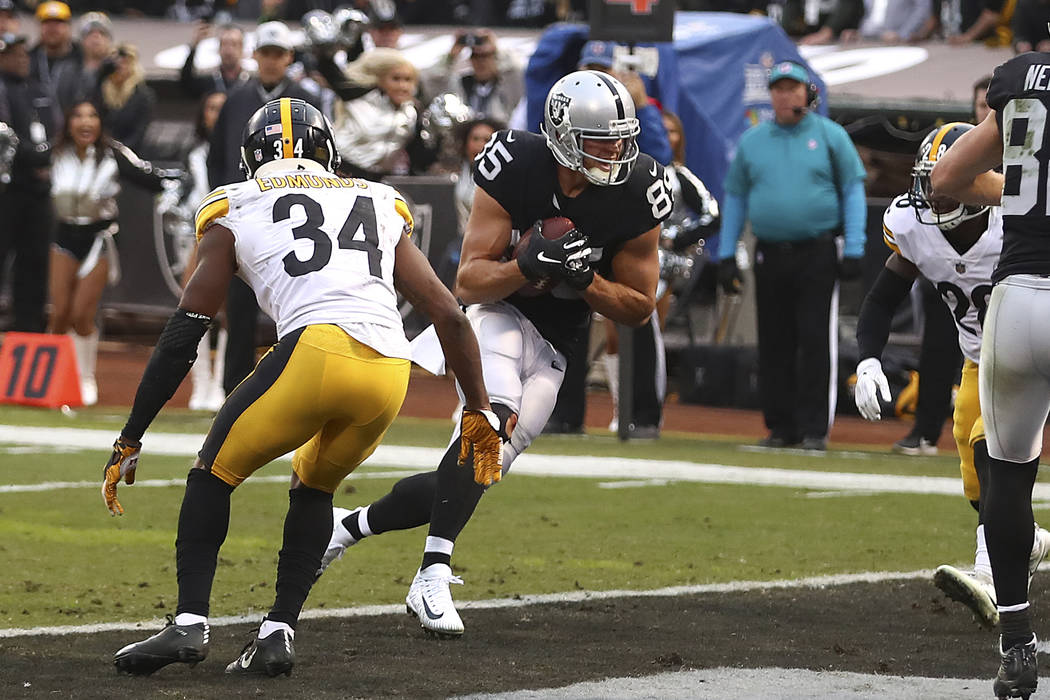 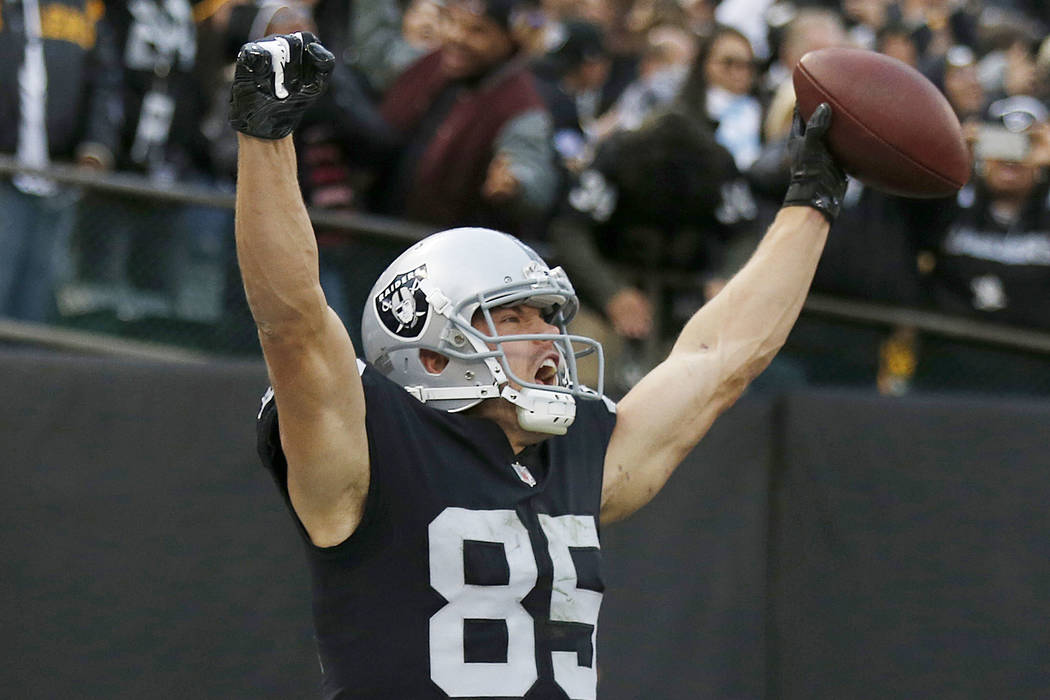 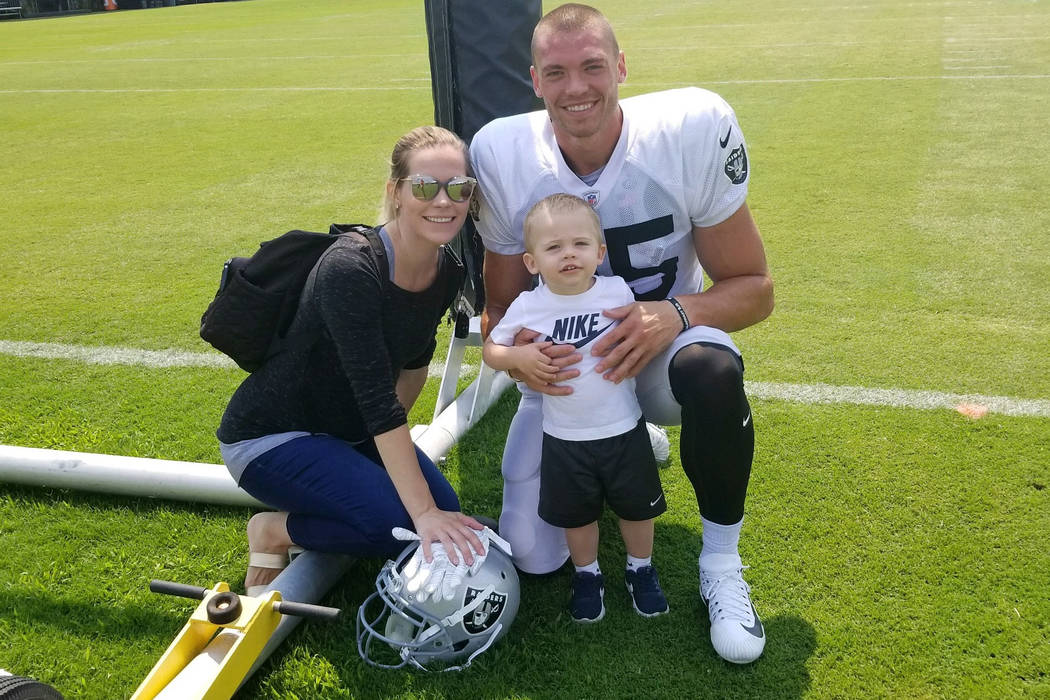 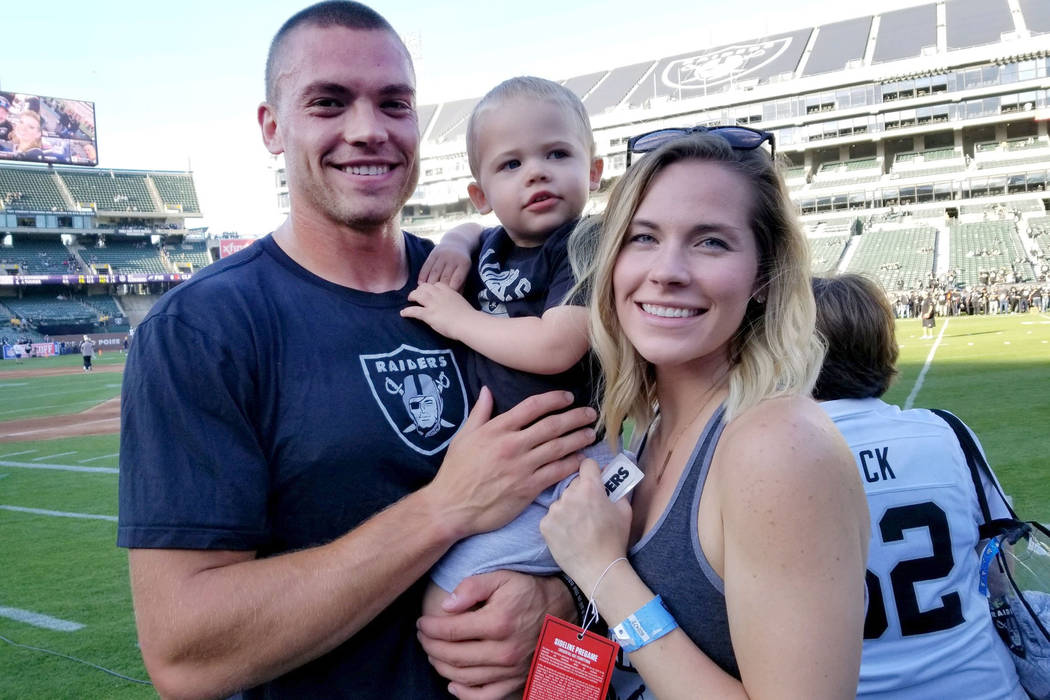 ALAMEDA, Calif. — He chose the Division III school in a remote Wisconsin town for its academics and multiple sports he could play. She chose it for the academics and club lacrosse program that, according to an outdated website, the college still offered.

Those factors brought Derek Carrier and his future wife onto the same campus.

Fate took care of the rest.

During the 2010 fall semester, mutual acquaintances led Carrier into Dora Maslinski’s freshman dorm room. He quickly noticed a dark banner, which Dora made by hand and hung against her wall.

The Raiders tight end will be on the field Monday evening against the Denver Broncos. From their East Bay home on Christmas Eve, Dora Carrier will be watching with their two children, the youngest of whom was born this month. The couple’s NFL journey is full of twists and turns.

Together, they’ve navigated them all.

Derek and Dora Carrier bonded at Beloit College over a shared taste for scream-heavy Christian metal music. One of Dora’s favorite bands at the time was Underoath. On a campus of fewer than 1,500 undergraduates, she happened to meet another fan who instantly recognized the group’s banner on her wall.

“At the college we went to, no one but us listened to that music,” Dora said. “So it was very rare. When he struck up that conversation, I was shocked. Just as shocked as he was.”

Today, that same banner sits in a glass case inside their bedroom.

Underoath sparked a friendship. A friendship developed into a partnership; they began dating around Thanksgiving. A couple months later, Derek and Dora found themselves under oath, as Derek purchased tickets to the band’s show at House of Blues in Chicago on Feb. 9, 2011.

On that same day, he offered her a promise ring.

It was essentially a proposal, sans the kneeling.

“I didn’t have any money,” Derek said. “I was like, ‘I got what I could, and I bought you this ring. It’s not an engagement ring. I’ll get you an engagement ring when we get engaged, but this is just something until then.”

Said Dora: “It was like an engagement. I still cried.”

Rather than be a football walk-on at Wisconsin, Derek attended Beloit on academic scholarship and played both football and basketball. The NFL wasn’t on his mind. By his junior season, however, league scouts began to express interest. Come 2012, a professional career began in which Derek would bounce from city to city, club to club.

But he remained on the same team.

Six years ago, Derek went undrafted and spent his first offseason with the Raiders.

Dora, who helped restart the club lacrosse program at Beloit since it’d been dissolved before her arrival, is a couple years younger than Derek; she was still in school. So they were long-distance dating when the Raiders cut Derek following training camp in Napa, California.

He soon was signed to the Philadelphia Eagles’ practice squad, where he converted from wide receiver to tight end.

“When I started I was 6-4, 215 to 220 pounds,” Derek said. “Those first couple days in Philly, I was just getting thrown around. I had never blocked inline before in my enter life. All the sudden, I was blocking defensive ends who were 290-plus pounds.”

The move to tight end stuck. Even if the city didn’t.

Derek, whose weight today ranges from 240 to 245 pounds, joined the San Francisco 49ers’ practice squad in 2013. He made his NFL debut that same season, establishing his place in the league over a two-year span while earning time on special teams. In 2015, following their summer wedding, Dora moved out to Santa Clara, California.

Then, the excitement began.

The occasion: he was traded for what would be the first of two times in a two-year span.

San Francisco sent the couple to the Washington Redskins and coach Jay Gruden. There, they expanded their friend circle and started a family. Their first child, son Dominic, was born on Sept. 22, 2016. The Redskins traded Derek back to California in August 2017 to the Los Angeles Rams.

Their faith as nondenominational followers of Christ is a backbone to their relationship and household. It helped guide their social acclimation and philanthropic efforts in each town, finding a church and involving themselves in such causes as Convoy of Hope.

After one season in Los Angeles, Derek’s contract expired in March. The Raiders then signed him to a three-year contract.

The Bay Area is now home. Inevitably, given the Raiders’ impending relocation to Las Vegas, this must change, too.

The Carriers have embraced such adjustments.

This is their first holiday as a family of four. A daughter, Dahlia Marie Carrier, arrived Dec. 4 at 4:10 a.m., weighing 7 pounds and 15 ounces. Five days later, Derek caught a game-winning pass late in the fourth quarter of a 24-21 win over the Pittsburgh Steelers. They’ve made new friends within the Raiders organization, forming what they believe will be lasting friendships.

Even Underoath has changed. The group’s style and substance strayed from the couple’s preferences.

The oath they made to each other, however, remains the same.