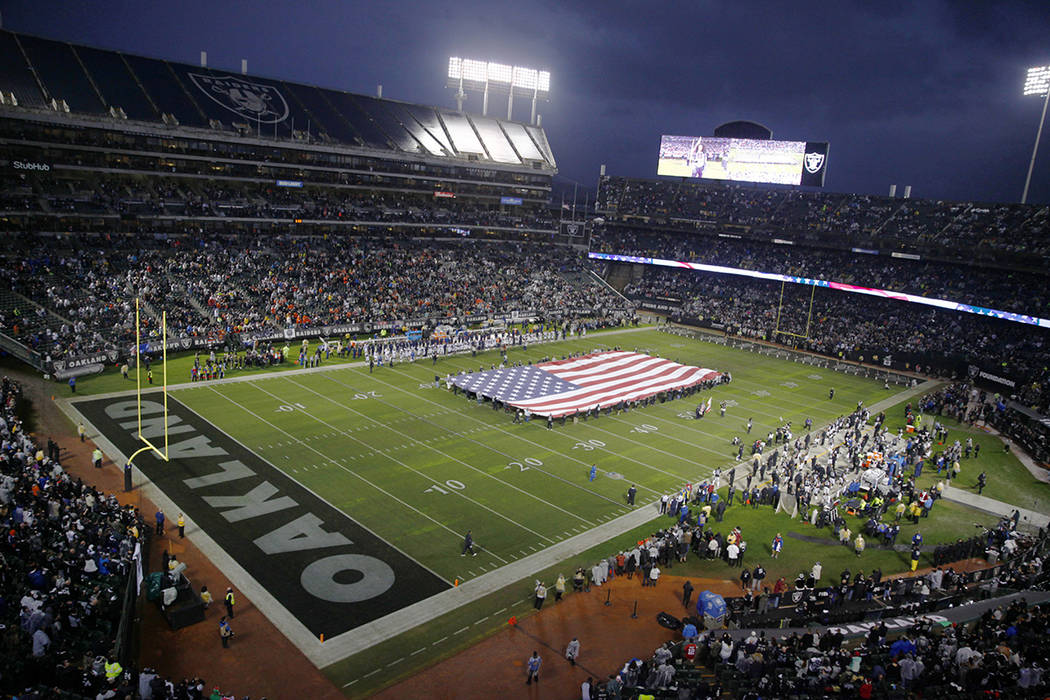 ALAMEDA, Calif. — A lease agreement allowing the Raiders to play in Oakland in 2019 is expected to be finalized and advanced next week to the voting stage, where it’s considered unlikely to face significant opposition, a person familiar with the process said Thursday.

Talks continue between the Raiders and local officials regarding a stadium lease. Although such an agreement has yet to be completed, many anticipate the language to involve a $7.5 million rent for 2019 and $10.5 million team option for 2020. The option serves as an insurance policy, exercised only if construction on the Raiders’ $1.9 billion stadium project in Las Vegas incurs a delay.

Other details, such as those related to parking, will be included in the expected deal.

Three public votes are required to approve any Raiders lease agreement at the Oakland-Alameda County Coliseum.

The first and most indicative is the Coliseum Authority, an eight-chair board that manages the Coliseum and Oracle Arena venues in Oakland. Four committee positions apiece are assigned to city of Oakland and Alameda County representatives, respectively. Approval is anticipated here because a lease agreement involves substantial input from the city and county.

Scott McKibben, executive director for the Coliseum Authority, has overseen negotiations with the Raiders on the committee’s behalf.

The Coliseum Authority typically meets on the third Friday of each month. That won’t occur next until March 15.

This, however, easily can be circumnavigated for a timely vote. With at least 24 hours notice, McKibben can call an open-session special meeting at which the Coliseum Authority would vote on a Raiders lease. Presuming it passes, the lease would advance to the eight-member Oakland City Council and five-member Alameda County Board of Supervisors.

“It’s pretty much done when the JPA (Coliseum Authority) does it,” McKibben said last week. “And that’s because the city JPA board members can’t vote without the city council giving them approval — in other words, releasing them to vote — which means that, in theory, they already have, in closed session, agreed to the deal.

“They will bring it back for a more formal, public ‘hoopty-la’ that says ‘we approved the Raiders,’ and that’s kind of where it is.”

Ongoing lease discussions were previously hoped to culminate in a deal by Thursday, which would enable a Coliseum Authority vote Friday. Earlier this week, those goal posts were pushed on account of the amount of discussion and review still required.

Voting will have to wait until next week.