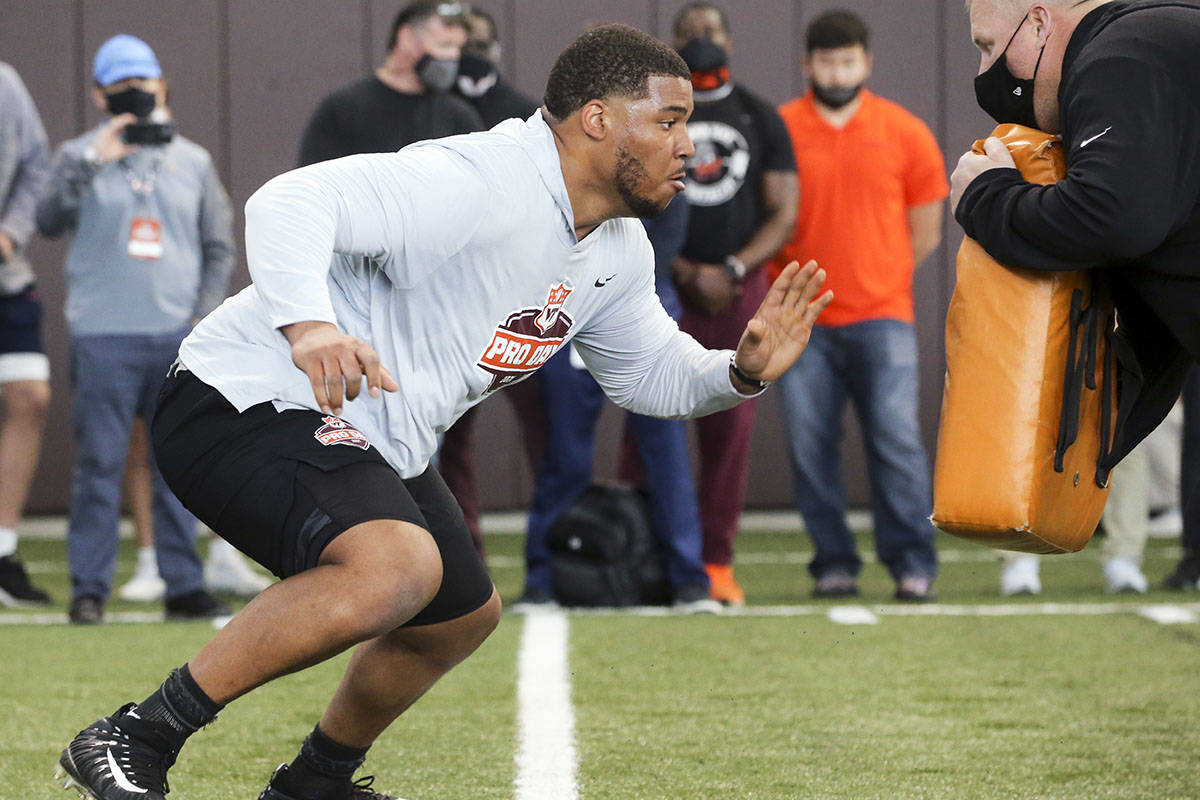 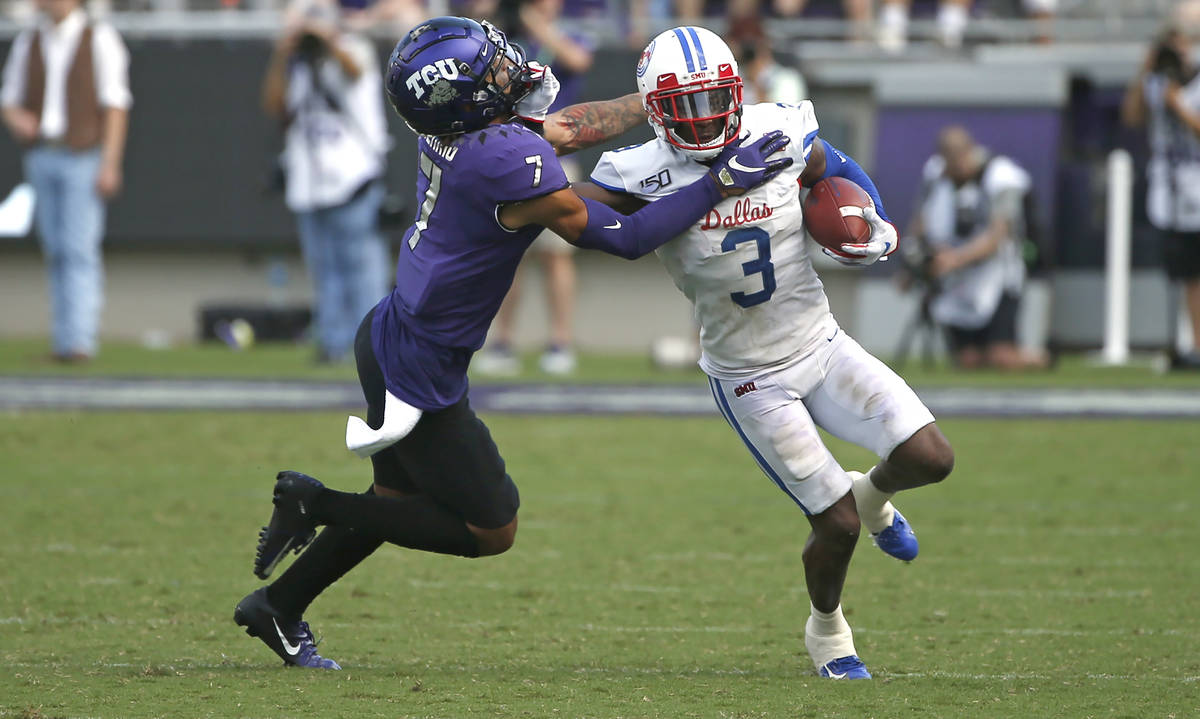 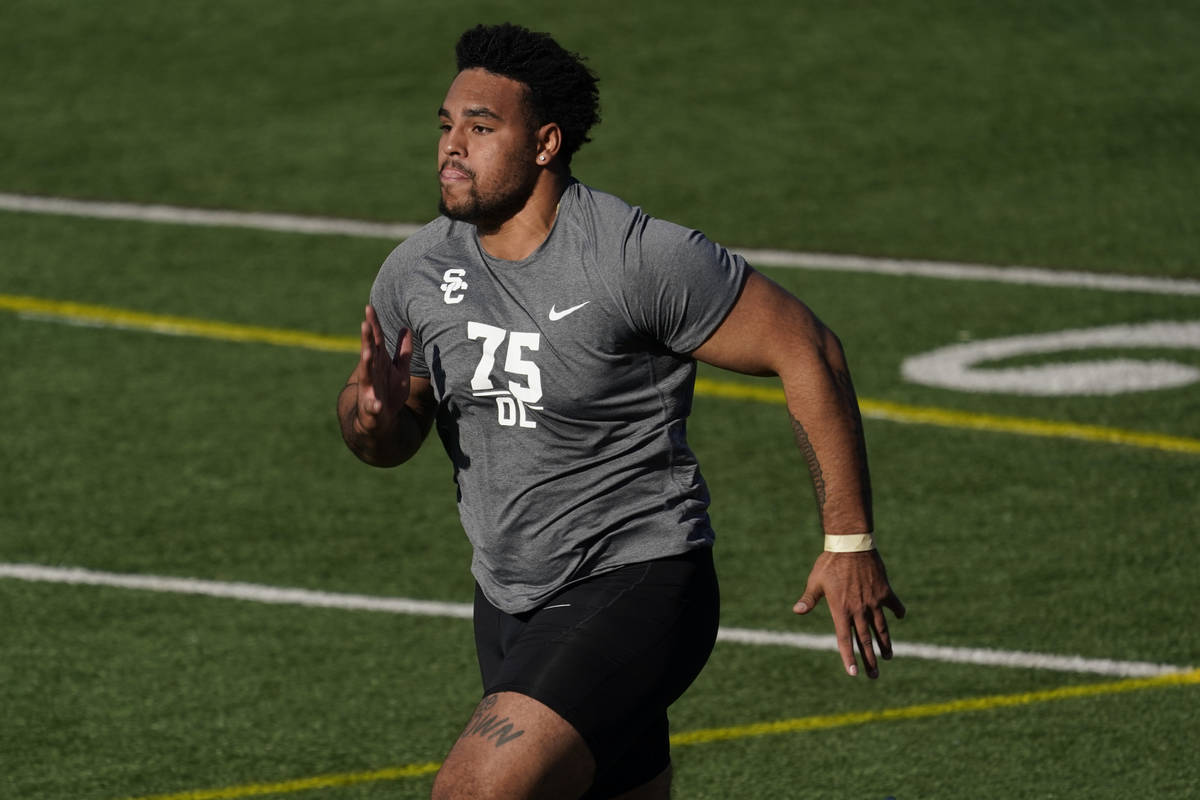 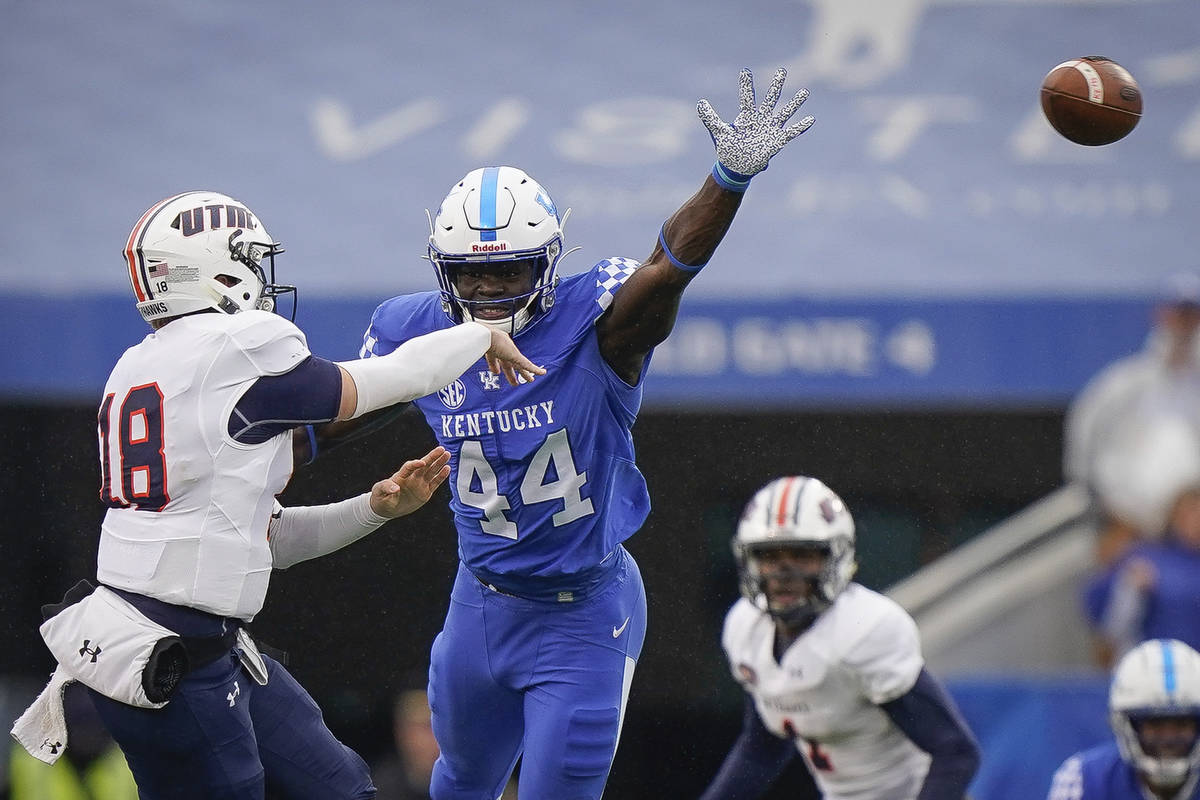 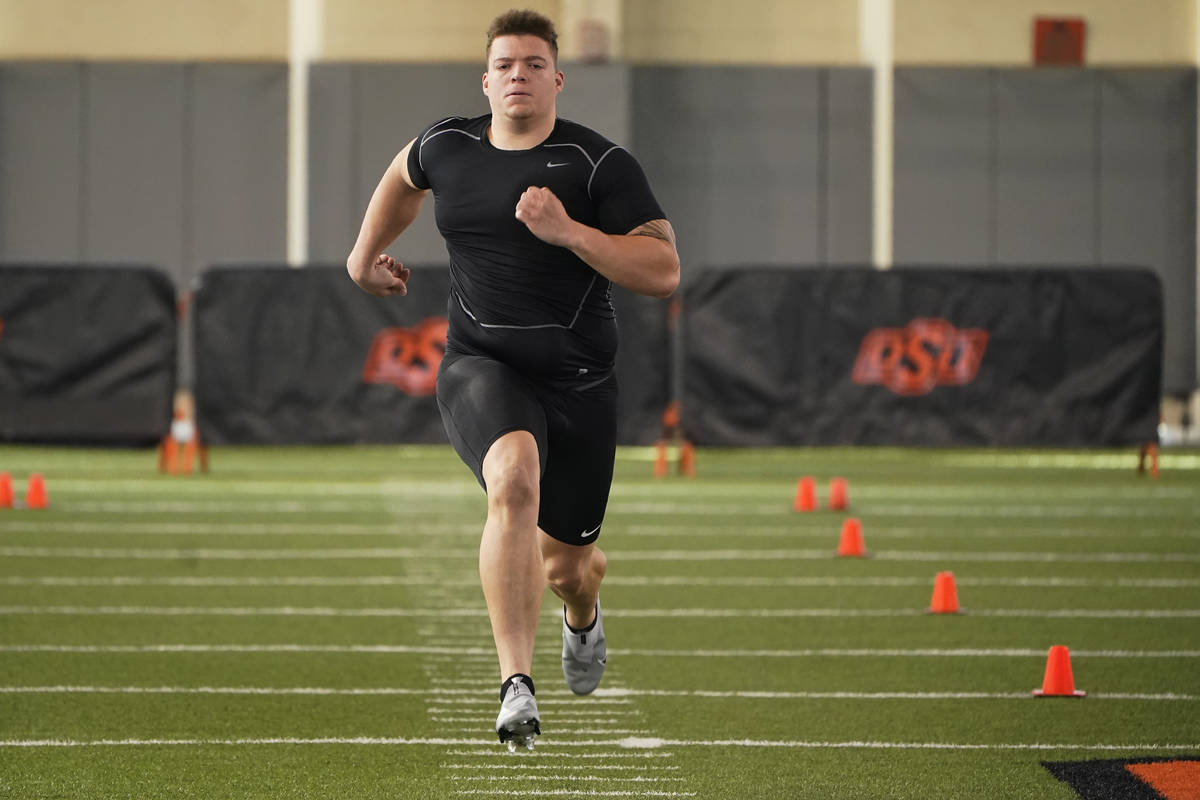 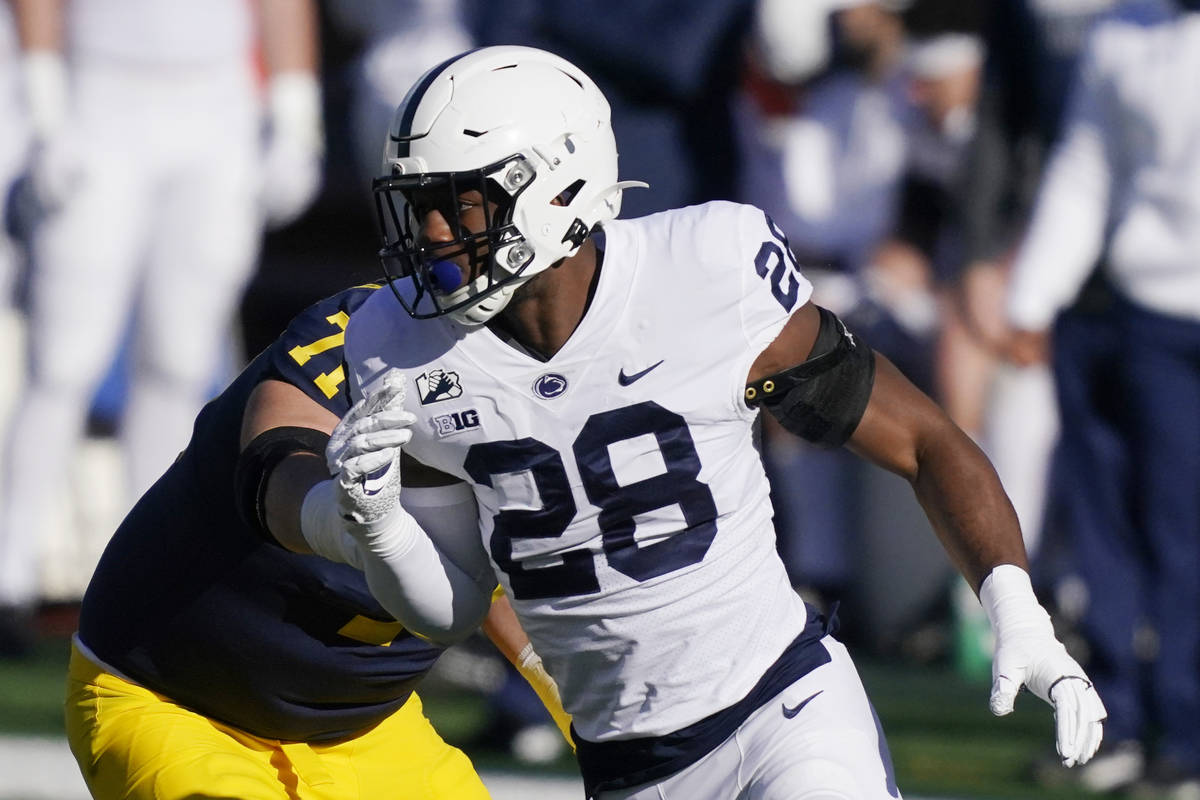 The prevailing wisdom after the initial stage of free agency holds that the Raiders need to select a right tackle in the first round of the NFL draft. It’s not a consensus, however.

An examination of some of the top mock drafts over the past couple of weeks reveals a multitude of options should Mike Mayock and Jon Gruden decide to hold firm and make a pick with the 17th selection in the first round.

Tackle is a popular choice. There’s not much agreement on who that player will be, but one name appears three times.

One mock has the Raiders trading down to fill a different need.

Here’s a look at who some of the experts believe the Raiders will select on April 29, in order of most to least mentioned:

■ Chad Reuter, NFL.com: Trading Trent Brown to the Patriots created a big hole at the right tackle spot. Darrisaw has the strength and athleticism to play either side of the line, even though he stuck on the blindside during his career at Virginia Tech.

■ Austin Gayle, Pro Football Focus: Darrisaw was one of the bigger college football breakouts in 2020. A former three-star recruit out of Maryland, he improved his grade from 68.6 starting at left tackle in 2018 up to 95.6 playing the same position in 2020. The 6-foot-5-inch, 315-pounder earned himself some money this season, for sure.

(Note: Gayle’s comment was based on what he would do, not what he predicts the Raiders will decide.)

■ Glynn Morgan, NBCSports.com: The decline in the salary cap has forced many teams to make tough decisions on which players to keep. The Raiders operated more effectively last season when they ran the ball well and play-action passed off of their successful running. Unfortunately, fiscal realities forced Las Vegas to part ways with a couple of effective offensive linemen. Darrisaw sets an excellent anchor in pass protection, allowing him to effectively absorb heavy bull rushes geared toward the quarterback. Because of his above average hip flexibility, Darrisaw resets his base quickly and smoothly adjusts to counter moves from skilled edge rushers.

■ Todd McShay, ESPN: The Raiders were one of seven teams to allow north of 260 passing yards per game last season. In a division with Patrick Mahomes and Justin Herbert, that’s a significant issue. Moehrig is the class’s top safety and has terrific ball skills, which might help improve the Raiders’ total of 10 interceptions in 2020. Las Vegas could also look at Christian Darrisaw (Virginia Tech) or Alijah Vera-Tucker if he is still available after dismantling its offensive line over the past month.

■ Nick Farabaugh, Pro Football Network: (In a potential trade with Cleveland from No. 17 to No. 26) The Raiders have no one to man the deep portion of the field. Telling it how it is, their free safety situation is absolutely abysmal. That makes the pick of Moehrig a must. Moehrig is an athlete with phenomenal range and versatility on the back end of the defense. More importantly, he provides the Raiders flexibility they haven’t possessed in their secondary for years, allowing their coverages to be more exotic and create big plays.

■ Jeff Kerr, CBS: The Raiders could use a tackle on the right side after trading away Trent Brown. This isn’t normally Vegas’ way of thinking, but it’s hard to pass up Vera-Tucker if he falls to the middle of the first round. Derek Carr has protection on both sides of the line.

■ Drae Harris, The Draft Network: The Raiders lost both of their starting guards this offseason. They allowed Richie Incognito to return on a more team-friendly contract, however. They pair him with the best interior offensive lineman in this class in Alijah Vera-Tucker.

■ Mel Kiper, ESPN: Get to know this name, because Davis is a big-time riser. When I sat down recently to watch his 2020 tape, I loved what I saw. He has tremendous range. He is physical. He can play inside or outside. He can cover and has some ball skills, including picking off three passes last season. Davis is the total package, and he could slot in at middle linebacker for Jon Gruden’s Raiders team. The other position to monitor here is on the offensive line, with former starters Trent Brown, Gabe Jackson and Rodney Hudson all being traded away.

■ Eric Edholm, Yahoo!: Why Jenkins over Virginia Tech’s Christian Darrisaw? Well, for one, he’s well-versed at right tackle, which is a sore spot after the trade of Trent Brown. They’ve nuked a big chunk of their high-priced offensive line and need a Day 1 starter. Jenkins is a big, strong mauler who fits the Raiders’ profile, we think, a bit better than Darrisaw, more of a smooth technician.