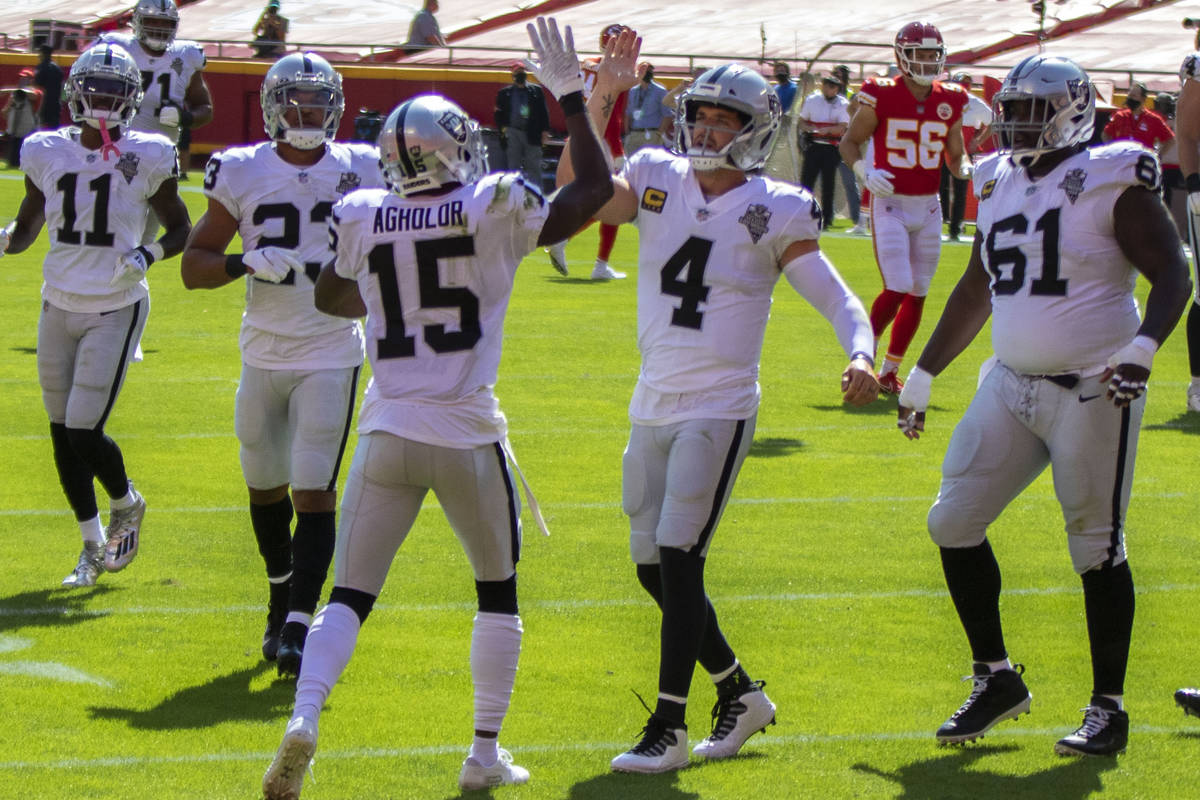 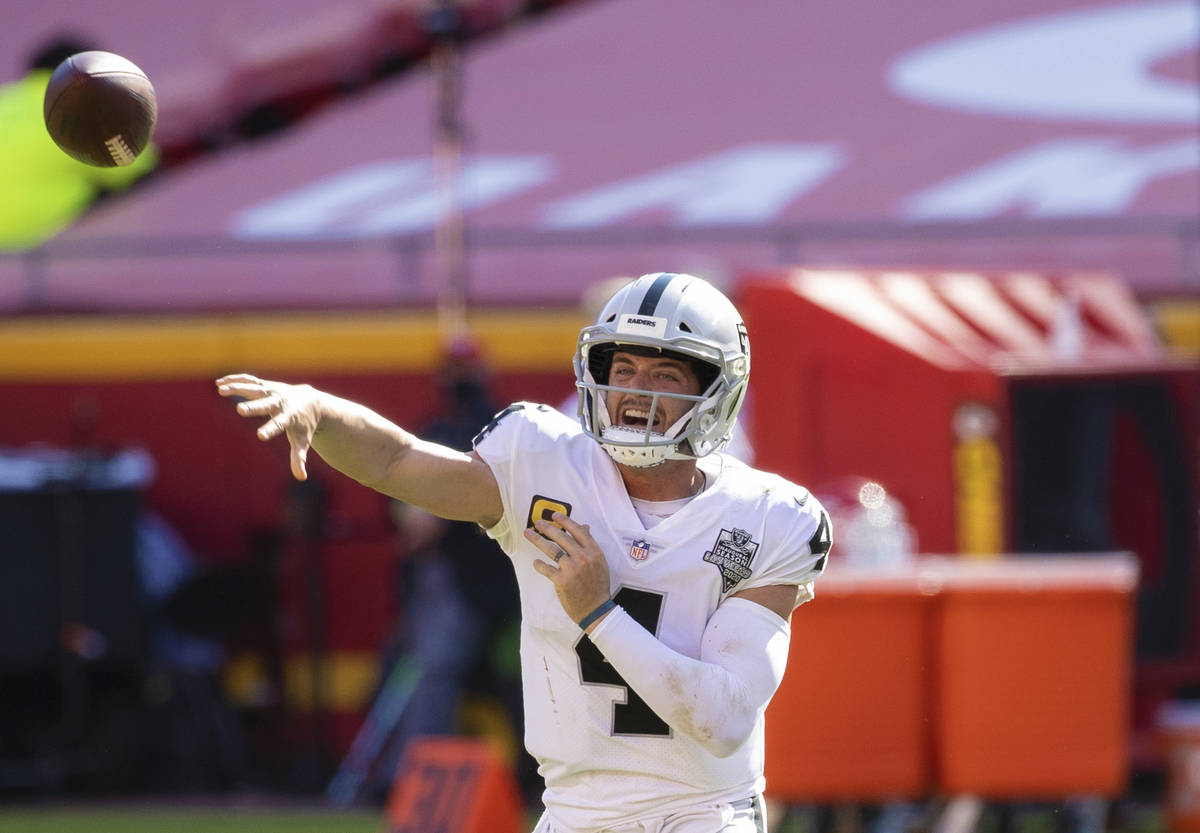 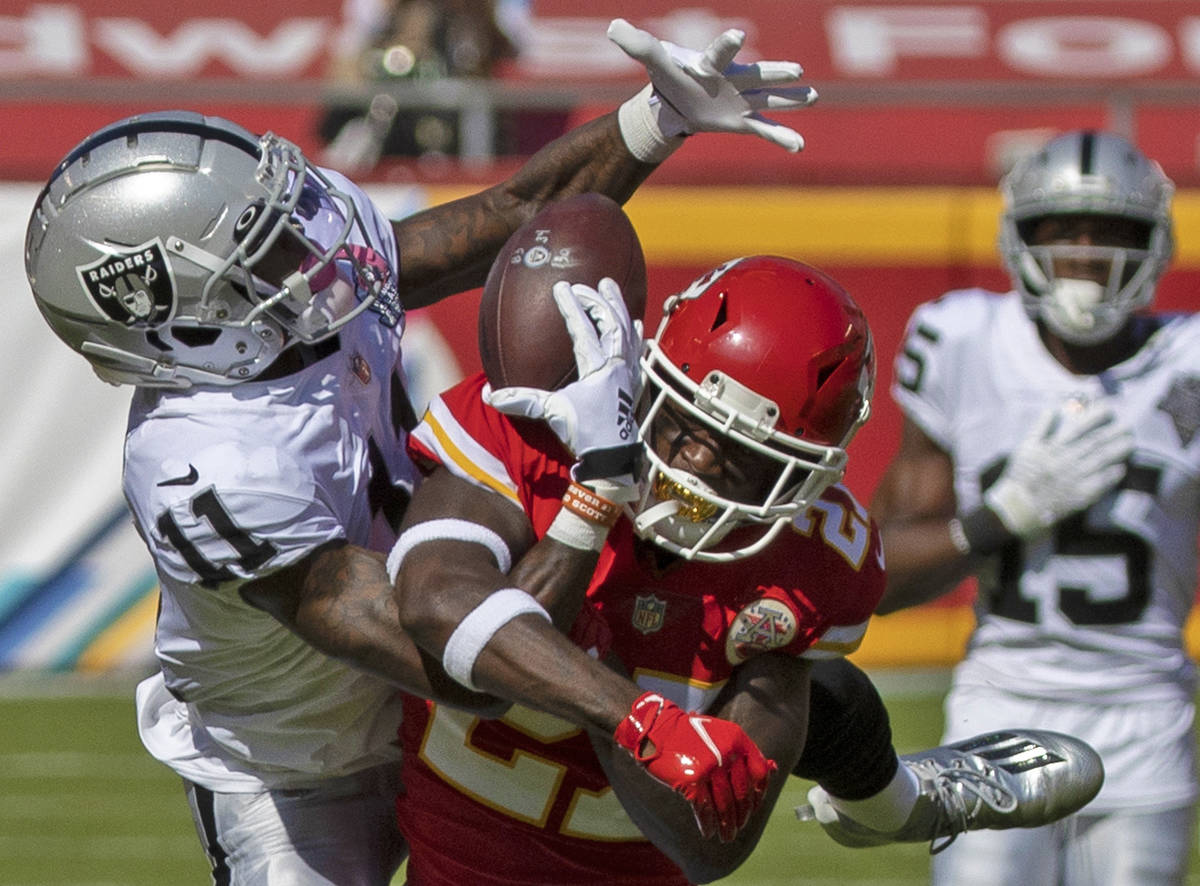 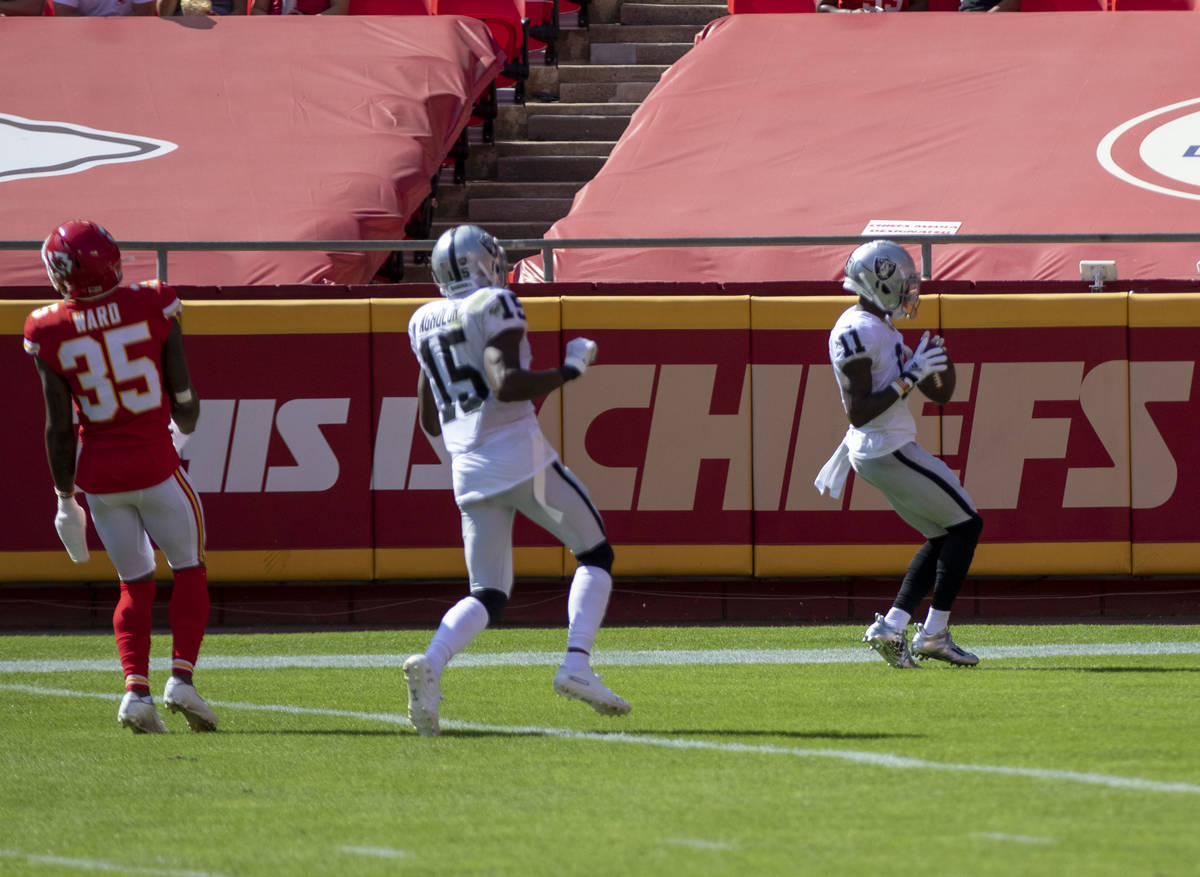 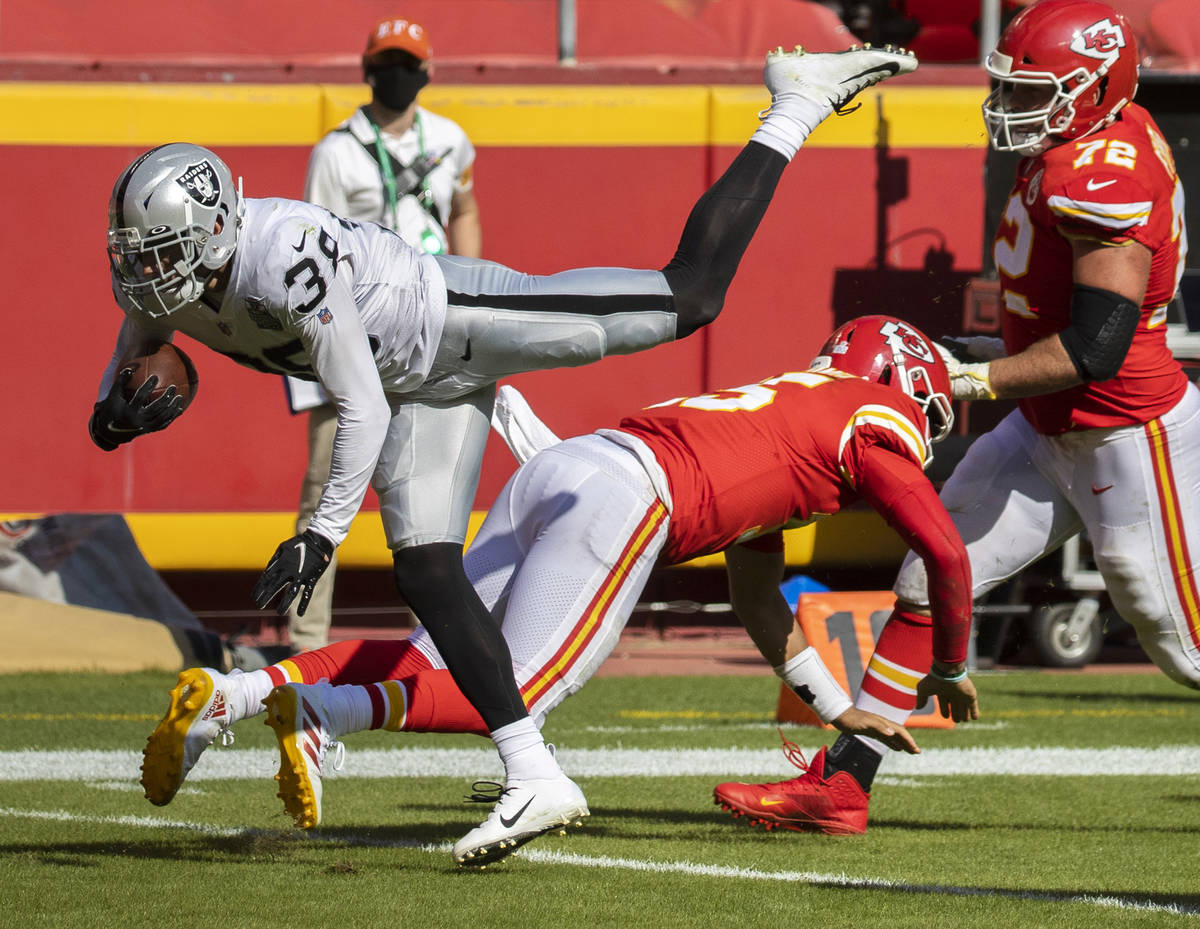 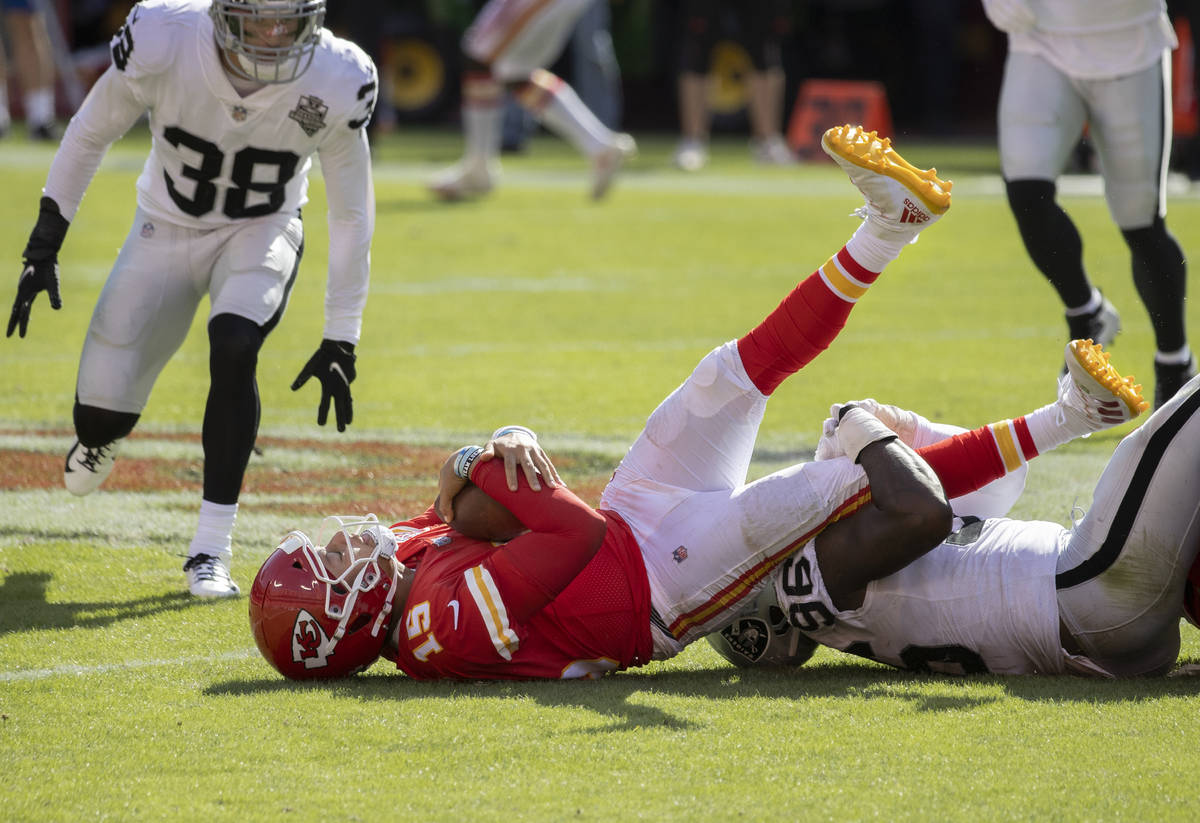 As the Raiders prepare to welcome Kansas City to Allegiant Stadium on Sunday night, much more than a chance to complete a two-game season sweep of the Chiefs awaits them.

But to reap those rewards, the Raiders need to replicate the formula they followed to upset the Chiefs 40-32 in the first meeting last month at Arrowhead Stadium. The stakes are high.

A repeat win for the Raiders (6-3) pulls them within one game of the Super Bowl champs in the AFC West and gives them the head-to-head tiebreaker advantage. While it might seem far-fetched that the Raiders could chase down the Chiefs (8-1) in the final six games, it wouldn’t be out of the question, given the demanding schedule facing Kansas City.

Among their remaining games are trips to Tampa Bay, New Orleans and Miami. All three are in the playoff hunt, and it is not inconceivable that Kansas City loses at least one of those games.

The Raiders, on the other hand, face their two toughest remaining opponents at home, taking on the Indianapolis Colts and the Dolphins.

Beyond the division race, the Raiders have the fifth seed in the AFC’s seven-team playoff race and need to win to maintain possession of that spot.

To do so, they would be well served to follow the same blueprint they used in Kansas City last month.

Here is a look at what the Raiders did right, and what they’ll need to do again.

The Raiders have been inconsistent getting pressure on quarterbacks, though they have made steady improvement while rising to third in the NFL in hurries with 47 and 14th in pressures with 81. But they remain tied for 27th in sacks with 11.

They were at their best against the Chiefs, amassing three sacks, 23 pressures, 18 hurries and five quarterback hits. In the process, they harassed Patrick Mahomes into 22 of 43 passing, his only interception of the season, a 76.7 quarterback rating and a season-low 83.4 passer rating.

All of which left Mahomes questioning some of his decisions.

“When you look back on the game, there were probably some times where I should’ve gotten rid of the football,” Mahomes said this week. “Knowing when to make these big plays happen and when to get the ball out of my hands is something that I battle with every single week.”

While the Raiders’ pass rush was effective in disrupting the passing game, the disciplined way in which Las Vegas attacked and corralled Mahomes negated his running ability. As a result, while he broke off six runs while being flushed out of the pocket, he gained just 21 yards.

Derek Carr has been criticized for his reluctance to throw deep throughout his career, but he is changing that narrative this season by taking deep shots.

That was certainly the case against the Chiefs. He unleashed a number of long balls that created big plays while also forcing the Chiefs to honor the possibility. In the process, it opened things up in the short game for Carr and the Raiders to exploit.

The key to it all was Raiders rookie receiver Henry Ruggs, who had missed the previous two games with knee and hamstring issues. He immediately made his presence felt with two big catches, one of which went for 72 yards and a touchdown. Ruggs finished with two catches for 118 yards, but his impact extended far beyond his stats.

The presence of Ruggs is a dynamic the Raiders believe has altered the way opponents game plan for them.

“We’re not being defended like we’ve been defended in the past,” Raiders coach Jon Gruden said this week, referring to the respect defenses must pay Ruggs’ speed.

The attention helped to allow Carr to connect with Nelson Agholor on a 59-yard touchdown and Hunter Renfrow on a 42-yard reception.

“Listen, they just got behind us,” Chiefs coach Andy Reid said after the game. “I would say a couple of them were just beat, and then other ones I’m not sure we were doing the right things. That’s how these things go when you have big plays on you.”

Carr at his best

Carr’s struggles at Arrowhead Stadium were well-chronicled leading up to the first meeting. He was winless in his previous six starts in Kansas City. But armed with his best supporting cast since joining the Raiders in 2014, Carr delivered a signature performance while outdueling Mahomes.

Of Carr’s 22 completions, 11 players were targeted and 10 made receptions. Taking advantage of a secondary whose positioning suggested the Chiefs weren’t convinced Carr would drive the ball down the field, he continually attacked on deep routes while connecting on throws of 72, 59, 46 and 42 yards.

Carr’s willingness to throw long was the continuation of a trend. This season, he’s exploited opposing defenses by attacking their weaknesses. That has meant throwing long, or finding receivers on shorter routes, or switching out of a pass to a run based on the defensive front. It has even occasionally meant Carr taking off and running.

“From the run game to the pass game, I take a lot of joy in just controlling … the whole situation,” he said. “Without getting too much into our percentages and how much I do it, there are times where we do things like that and I absolutely love it.”