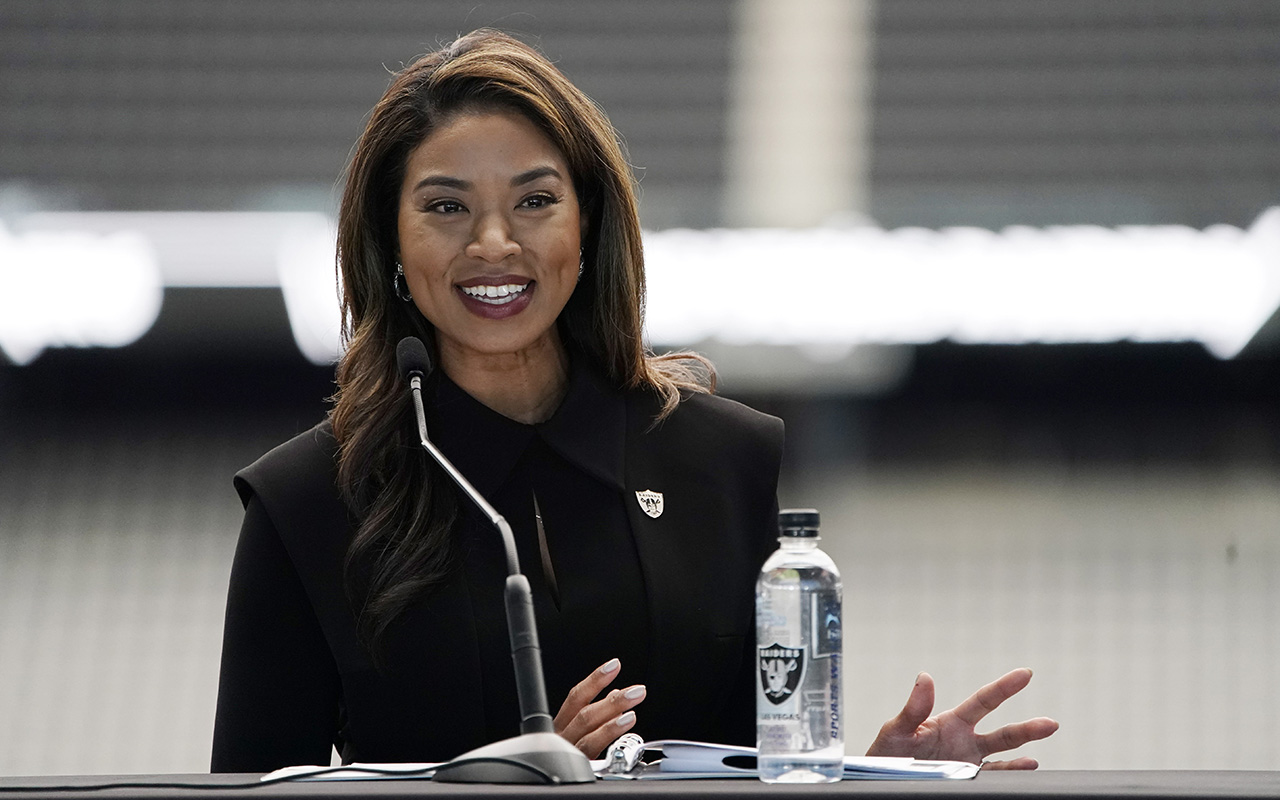 Sandra Douglass Morgan, shown here during her introductory news conference, was hired as the new president of the Raiders after the most tumultuous season in team history.. (AP Photo/John Locher)

Into the spotlight in her hometown 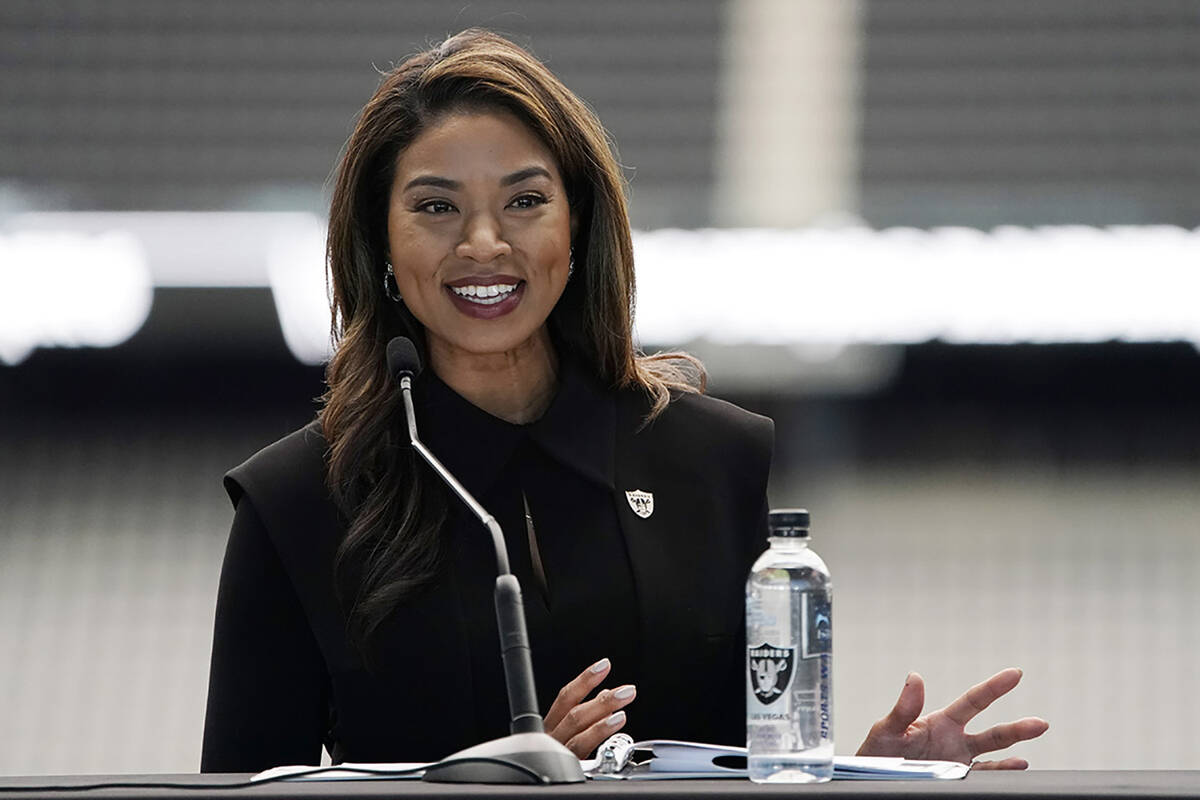 Sandra Douglass Morgan speaks during a news conference announcing her as the new president of the Las Vegas Raiders. (AP Photo/John Locher) 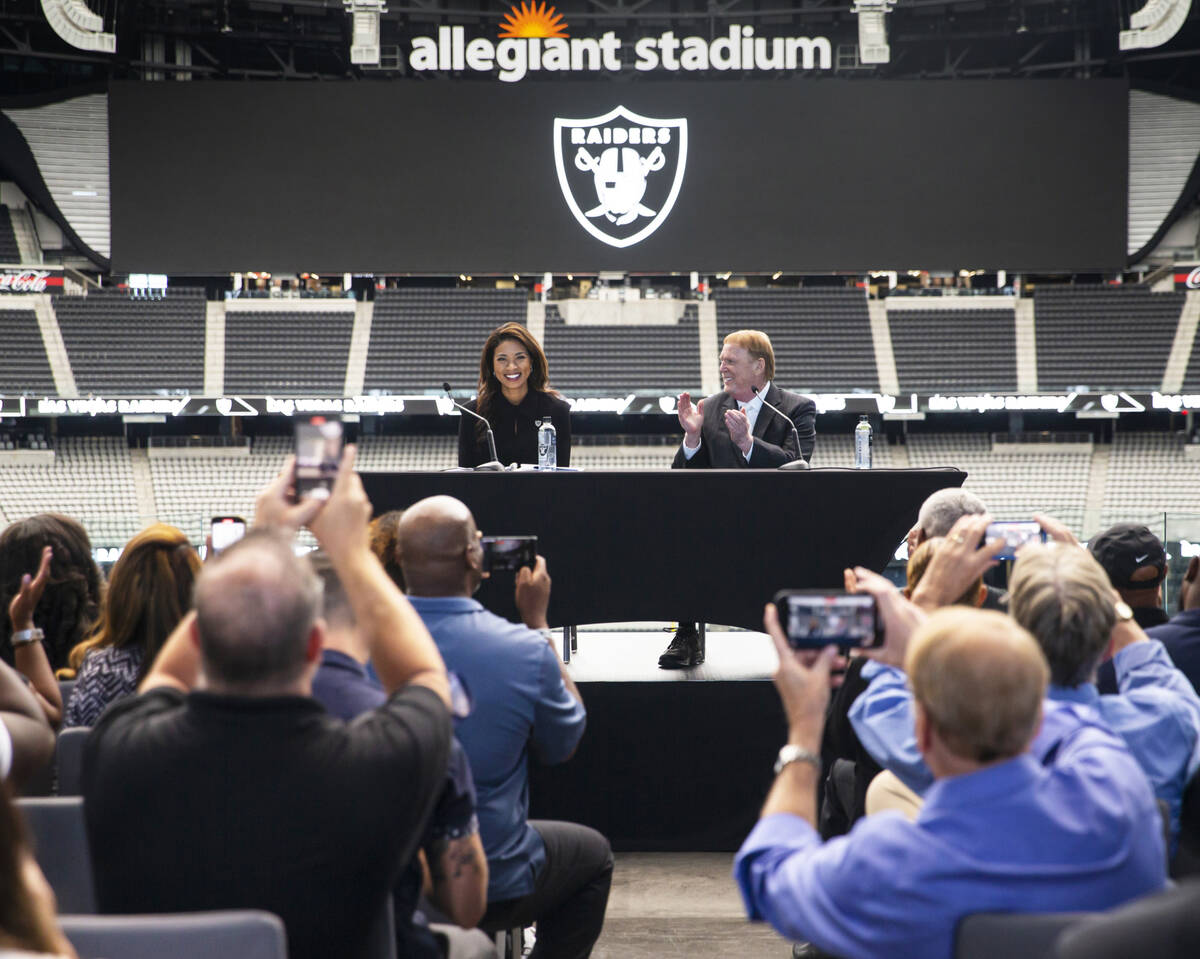 Raiders training camp is underway, and silver bleachers line the north end zone at the practice field outside their Henderson headquarters. They are reserved the first Saturday of camp for family members and friends of Raiders players and coaches, or other organizational dignitaries — like the first Black female team president in NFL history.

Except Sandra Douglass Morgan chose not to sit there. She didn’t care for the isolation, preferring bleachers on the sideline among the staffers and their families, the people she’s grateful to lead.

“She knows she holds this prestigious position, but she’s still Sandra Douglass Morgan from the east side of Las Vegas,” said her husband, Don, four years a safety for the Minnesota Vikings and Arizona Cardinals.

“It didn’t change her. People expected it to change. But it didn’t, and that’s why people gravitate toward Sandra.”

And why the Raiders hired her.

Douglass Morgan was chosen last month to stabilize the Silver and Black, colors as synonymous with dysfunction as they used to be with Super Bowls. The franchise’s second season in Las Vegas was the most tumultuous in its 63-year history, fraught with turnover in leadership that marred a 10-7 record and its second playoff berth since 2002.

“She knows she holds this prestigious position, but she’s still Sandra Douglass Morgan from the east side of Las Vegas.”

Former president Marc Badain resigned last year in July, ending a six-year term amid what owner Mark Davis called “accounting irregularities.” Former coach Jon Gruden resigned in October upon the revealing of racist, misogynistic and homophobic emails he wrote from 2011 to 2018. Interim president Dan Ventrelle was fired in May, claiming his dismissal was retaliatory after he alerted the NFL about concerns of a hostile working environment.

Indeed, the organization has faced scrutiny from other former employees, who also alleged that a toxic workplace subjected women to forced demotions, unequal treatment and retaliation if they voiced concerns.

But Douglass Morgan has a track record of quelling chaos, steeled by nearly two decades as a lawyer working for some of the most influential entities in the city.

Her resume alone though cannot quantify the way her infectious, disarming smile and wry sense of humor ease interpersonal connection. Or how her youthful enthusiasm and pragmatic, analytical nature can spark or steady a group chat, household or — perhaps — an NFL franchise.

As team president, she’s oversees everything besides football, leaving that to first-year head coach Josh McDaniels and general manager Dave Ziegler, who were hired by Davis in January to begin the Raiders’ reset. She heads business operations that envelop the game-day experience at Allegiant Stadium and community initiatives across the Las Vegas Valley. 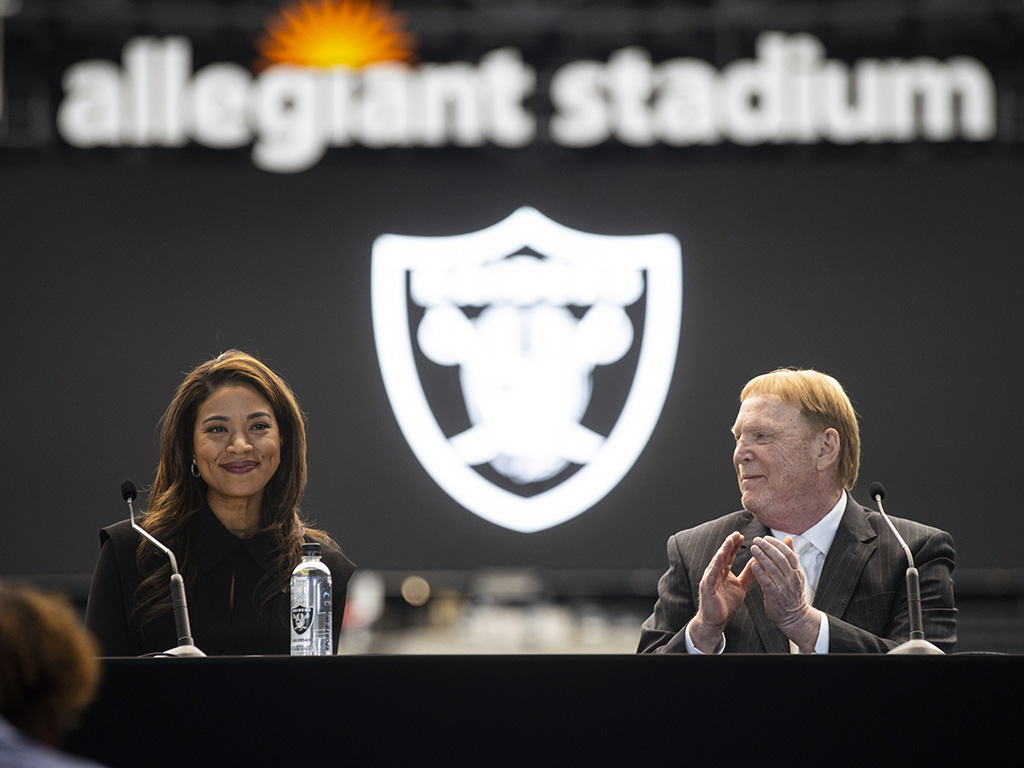 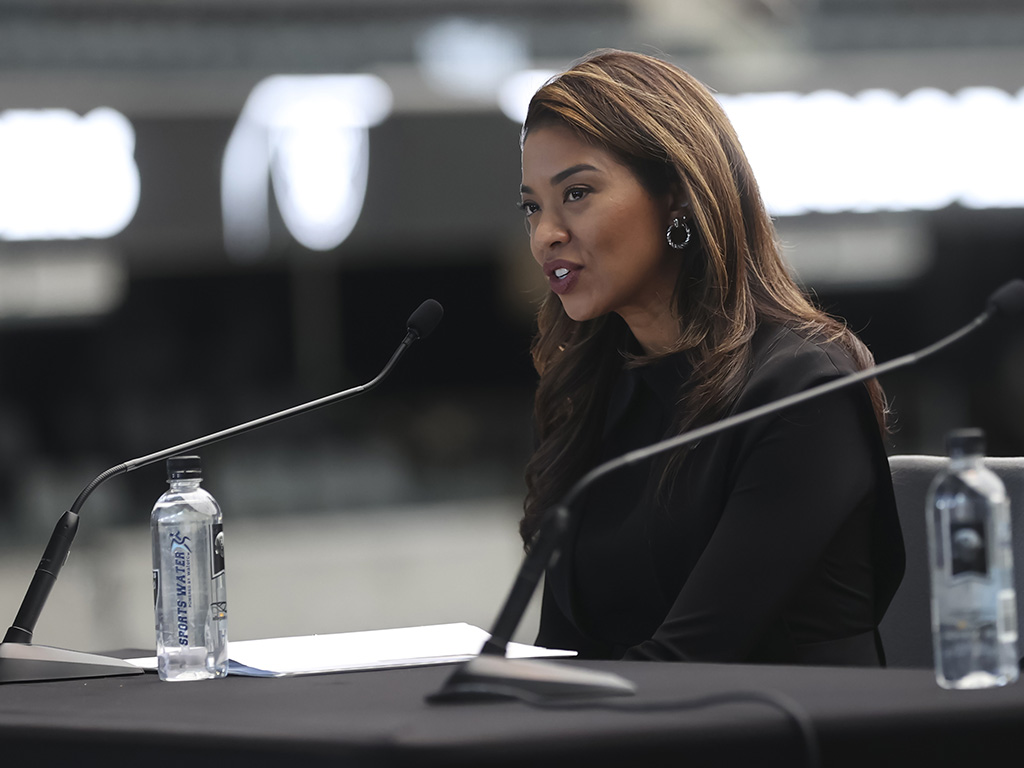 “I am thrilled to join you as we embark on one of the most exciting times in the history of our organization,” Raiders president Sandra Douglass Morgan wrote in a letter to team employees. (Chase Stevens/Las Vegas Review-Journal) @csstevensphoto 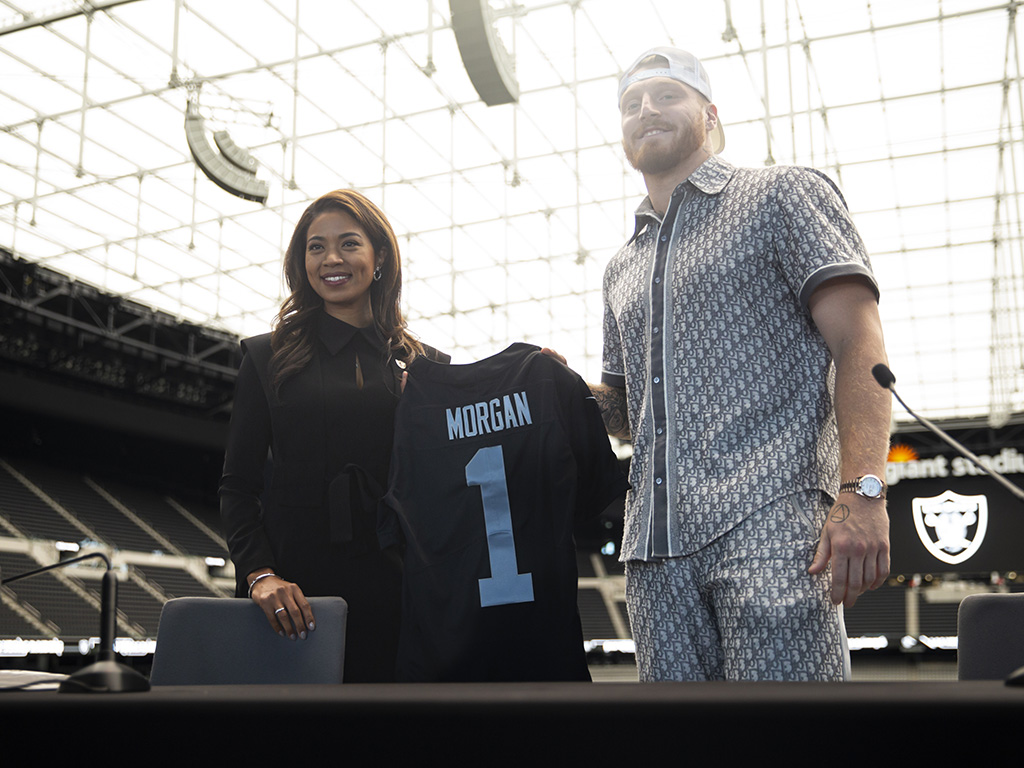 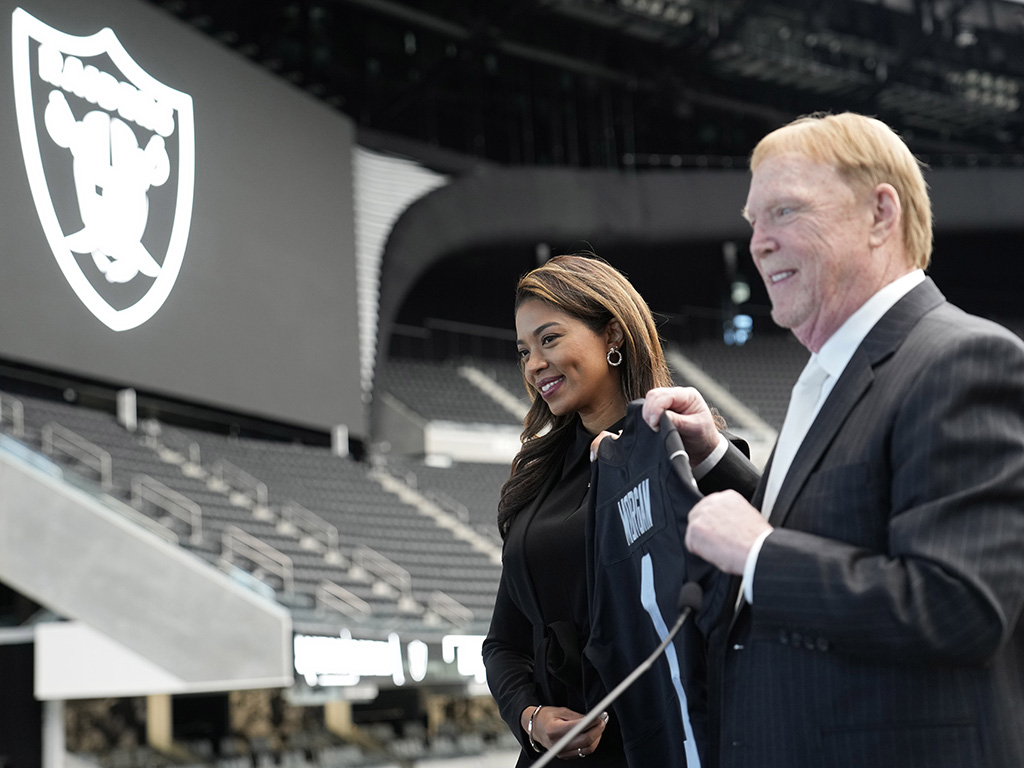 Raiders owner Mark Davis said Sandra Douglass Morgan’s roots in Las Vegas were not a criterion in her hiring, but her knowledge and connections were a plus.. (AP Photo/John Locher)

A fortuitous meeting at the Hilton became a family on the city’s east side near Nellis Air Force Base, complete with Douglass Morgan and older sister Sonya, now a graduate professor in the Ivy League at Columbia. Douglass Morgan was actually born on a base in Missouri, but her family moved to Las Vegas when she was a toddler.

Her dad worked traditional hours at a post office and her mom worked swing shifts in the casinos. One of the two would usually be home with the girls to encourage their curiosity and sense of identity.

“They’ve been a stable and consistent force in her life,” said lifelong friend Tanya Fowler, who too grew up near Nellis and spent plenty of blistering afternoons with Douglass Morgan at the base’s swimming pool.

Her parents would share stories of their encounters with customers — both the good and the bad — subtly weaving respect, empathy and patience into the fabric of their daughter’s character.

“You don’t realize it when you’re a parent, but children listen to a lot of things,” said Douglass Morgan, mother to son Dylan, 15, and daughter, Dana, 11.

“She really could do it all, and that’s the best part of our friendship.”

Among the other things Douglass Morgan listened to: music by A Tribe Called Quest, Janet Jackson, Bobby Brown, Wu-Tang Clan, the Beastie Boys and steady parental encouragement to fill her time with extracurricular activities.

Those artists provided a soundtrack to a childhood filled with schooling in Clark County’s Academically Talented Youth Programs, stints in student government, ballet, track and field and afternoons at the old Wet-N-Wild on Las Vegas Boulevard.

Her precocious ambition only intensified upon enrollment at Eldorado High School, where she was cheer captain and class president. She held leadership roles within the school’s Human Relations Club, in which students discussed topics like Black history and racial equality. And the National Honors Society, befitting for one of the top 20 graduates in the school’s class of 1996 and the recipient of a prestigious Presidential Scholarship to UNR.

The suits she now sports were once Timberland boots, jeans, throwback jerseys and Starter jackets, affirming that style and straight A’s aren’t and won’t ever be mutually exclusive. She was voted to the homecoming court as one of Eldorado’s most popular and approachable students — bridging the cliques to which she never was confined.

“Everybody just loved her,” Fowler said. “For her, it’s like it doesn’t matter where you go. They remember her. She remembers them. She was able to just get along with everybody.”

That sentiment extended beyond the walls of Eldorado and throughout a Las Vegas Valley she would roam in her two-passenger 1974 Nissan 260Z. Her first job at Champs Sports inside the Meadows Mall helped her fill the gas tank and finance the socializing she’d sandwich around her scholastic schedule.

Be it an R&B concert at Stardust or Dunes, an evening at the mall, picnic at Lorenzi Park or prom at Green Valley, Douglass Morgan sought to strengthen connections between her network of friends throughout the city.

“She really could do it all, and that’s the best part of our friendship,” said Amanda Okundaye, a Clark alumnus and friend whom Douglass Morgan met while working at Champs.

“We could definitely be straight-A students, yet be cultural and enjoy ourselves.” 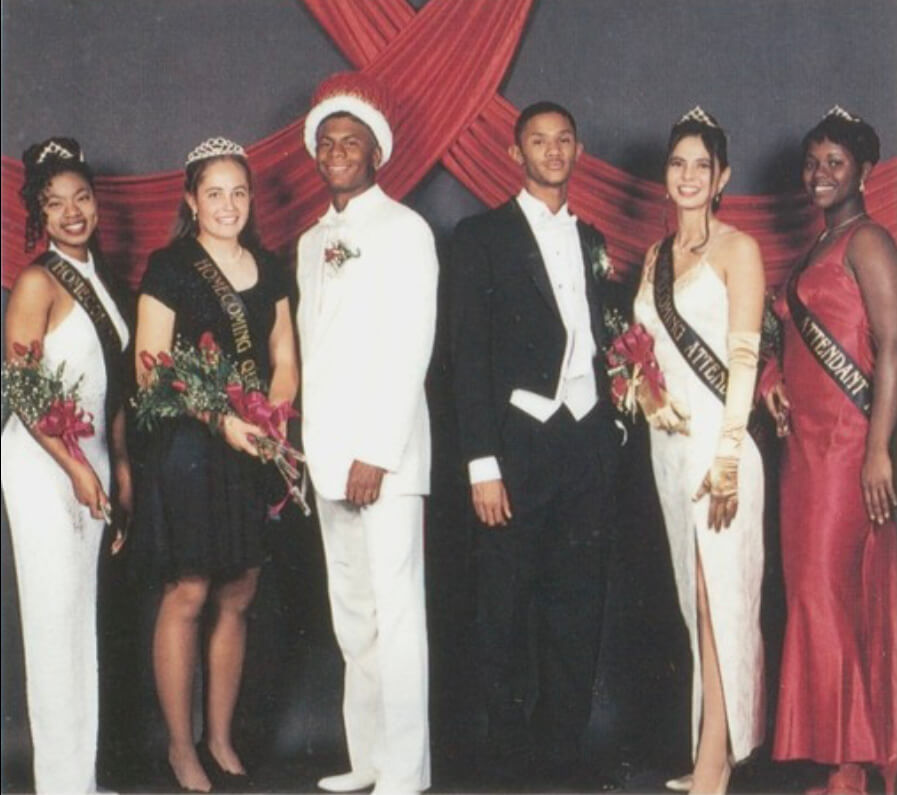 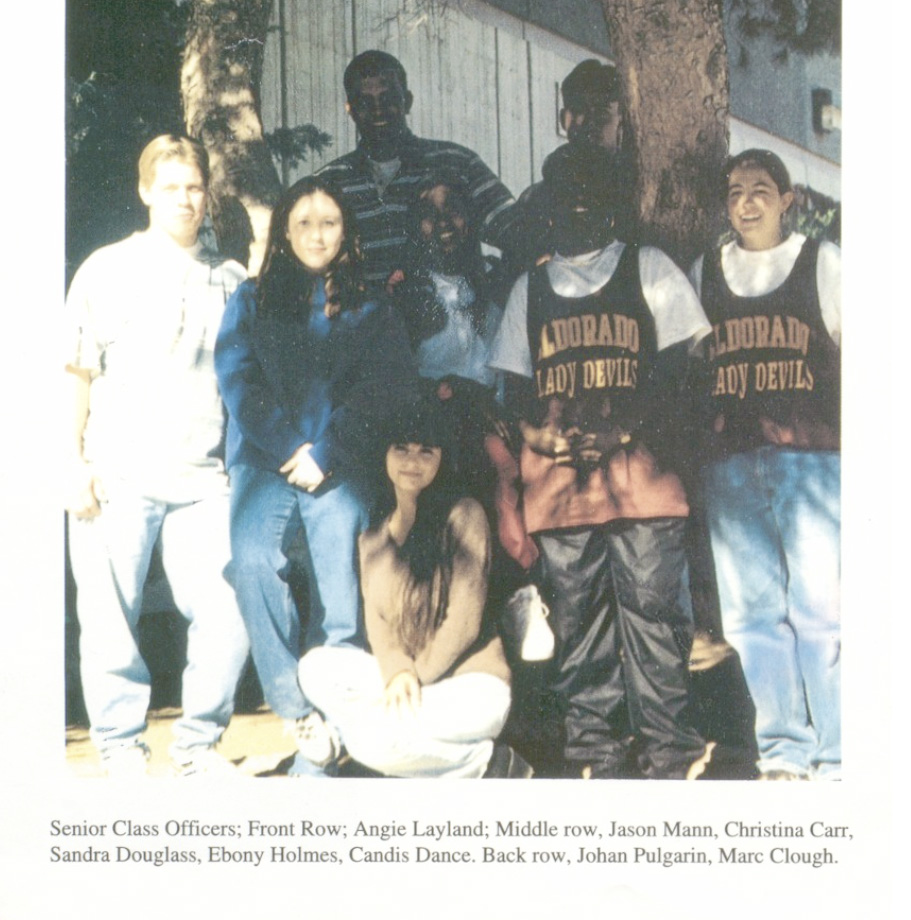 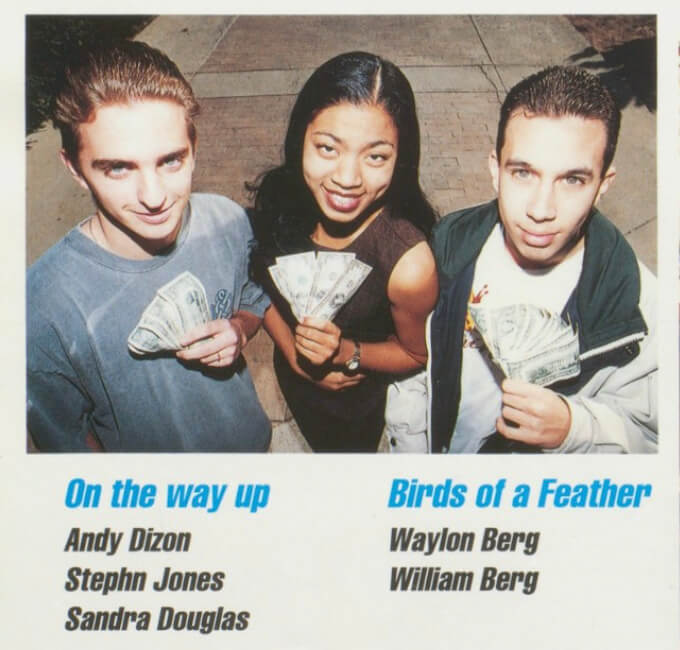 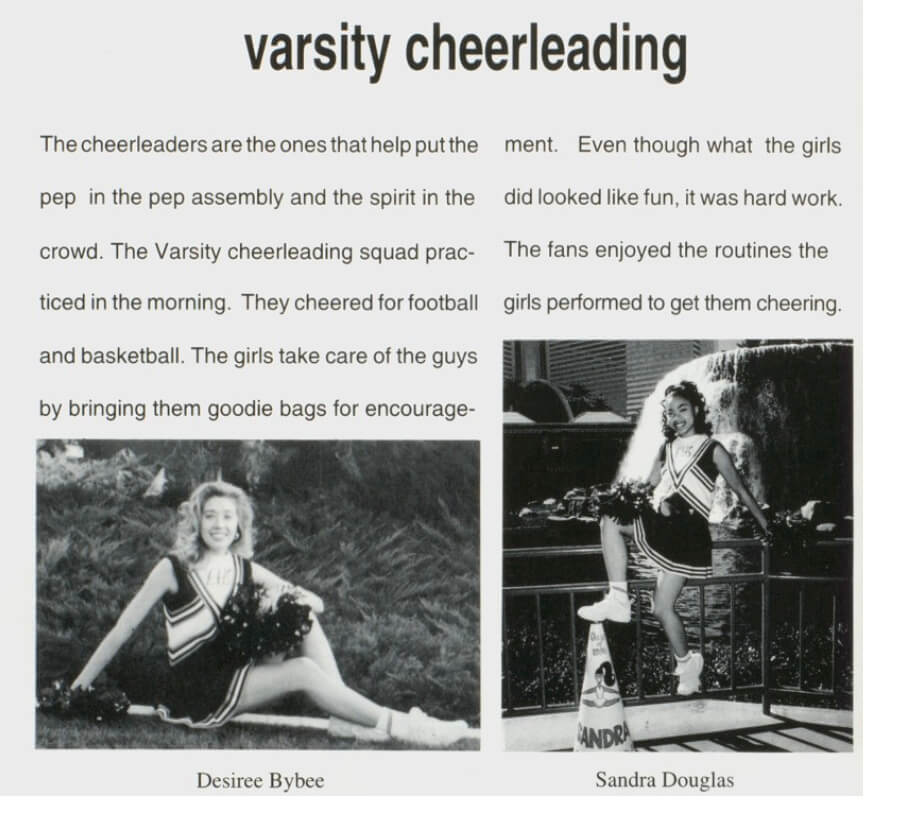 Sandra Douglass Morgan was class president, cheerleading captain and voted “On the way up” in Eldorado’s graduating class of 1996.

That said, Okundaye wasn’t surprised when she ventured from her Florida State campus to visit Douglass Morgan at UNR, where she’d organize and establish the chapter for Alpha Kappa Alpha — a historically Black sorority with which she remains involved. While attending UNR as an undergraduate, Douglass Morgan coordinated a series of trips with her closest friends to ensure she’d visit their colleges and they would visit hers.

They insist she’s still the proverbial glue that unites their inner circle. She wanted to see their schools and immerse herself in their college experiences.

So Okundaye immersed herself in Douglass Morgan’s and noticed that “everybody loved her at Reno that you’d run into. From the dorms to on campus. Heck, we went to little hole-in-the-wall food places and it’s just like ‘Sandra!’ like it’s Cheers.”

“She was the one who put education in the forefront for me. Almost a dating requirement.”

Nobody would love her in Reno more though than Morgan, then a safety at UNR whom she met inside Ross Hall where the English classes were housed. She prioritizes punctuality, but was running late for a change and collided with him while turning a corner after sprinting up a flight of stairs.

That accidental introduction fostered 20 years of marriage, but their relationship would begin only when Morgan sharpened his academic focus.

“She was the one who put education in the forefront for me. Almost a dating requirement,” he recalled with a chuckle.

Education remained the dominant focus for Douglass Morgan, who graduated in three years from UNR with degrees in political science and communications. A constitutional law class triggered her interest in jurisprudence amid former President Bill Clinton’s impeachment trial.

Intriguing talking points included the concept of legal precedent. Seminal Supreme Court cases like Roe v. Wade and Brown v. Board of Education were fodder for her desire to “dig a little bit deeper into the law.”

Timing, she says, was great because UNLV’s William S. Boyd School of Law opened in 1998 as she neared the conclusion of her undergraduate education. Its former dean, Frank Durand, helped convince her to apply after meeting her while visiting UNR’s campus.

“I honestly did think I was going to leave Nevada,” she said. “Most people did at that point.”

She probably wouldn’t have met Davis, who spent 10 months quietly recruiting her before gleefully announcing her hiring July 7 with a press conference at Allegiant Stadium.

“The best person for the job. No question about that,” Davis said.

She’d definitely be blazing trails somewhere else, though, because “if she wasn’t, I don’t know what she’d be doing,” per friend Asha Jones, who met Douglass Morgan in 2000 while interning for former congresswoman Shelley Berkley.

“I don’t believe there’s any ceiling in her future,” said esteemed Las Vegas lawyer Theodore Parker III, her first boss upon graduation from UNLV. “I think she can do pretty much what she wants.”

Right now, she wants to live in Las Vegas. She wants to watch her son play basketball and her daughter dance. To model for them the integrity her parents modeled for her. She wants to plan pool parties for her friends and their families. She wants to celebrate their successes the way they celebrate hers.

“The best person for the job. No question about that.”

She wants to advocate for those historically marginalized and disenfranchised.

She also wants to work for the Raiders.

After the introductory press conference concluded and the reporters dispersed, Douglass Morgan joined family members and friends inside one of the stadium’s suites for food, beverage and a private celebration they realized would be rather brief.

Leaving everybody there in awe, yet again.

“She handles it so gracefully. … It’s her. It’s Sandra,” Fowler said. “If it was going to be one of us, you knew it would be her. You kind of expect it to happen because that’s who she’s always been.”