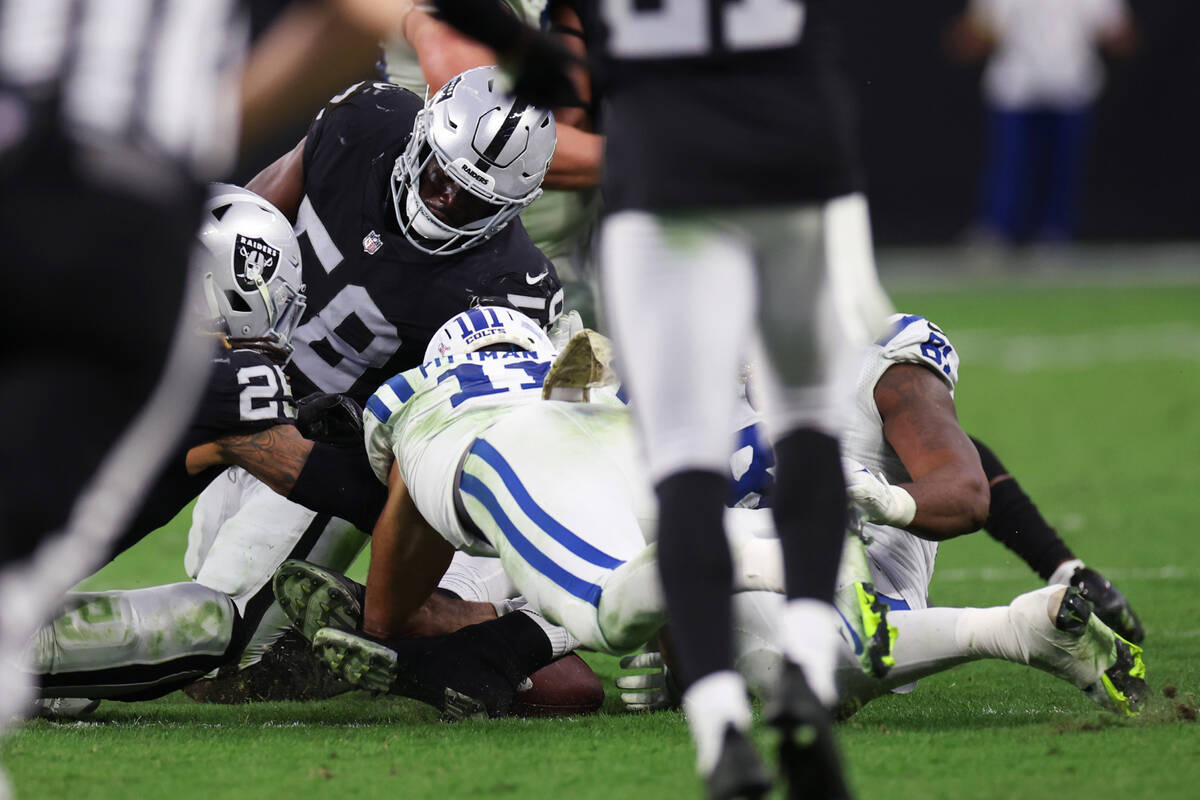 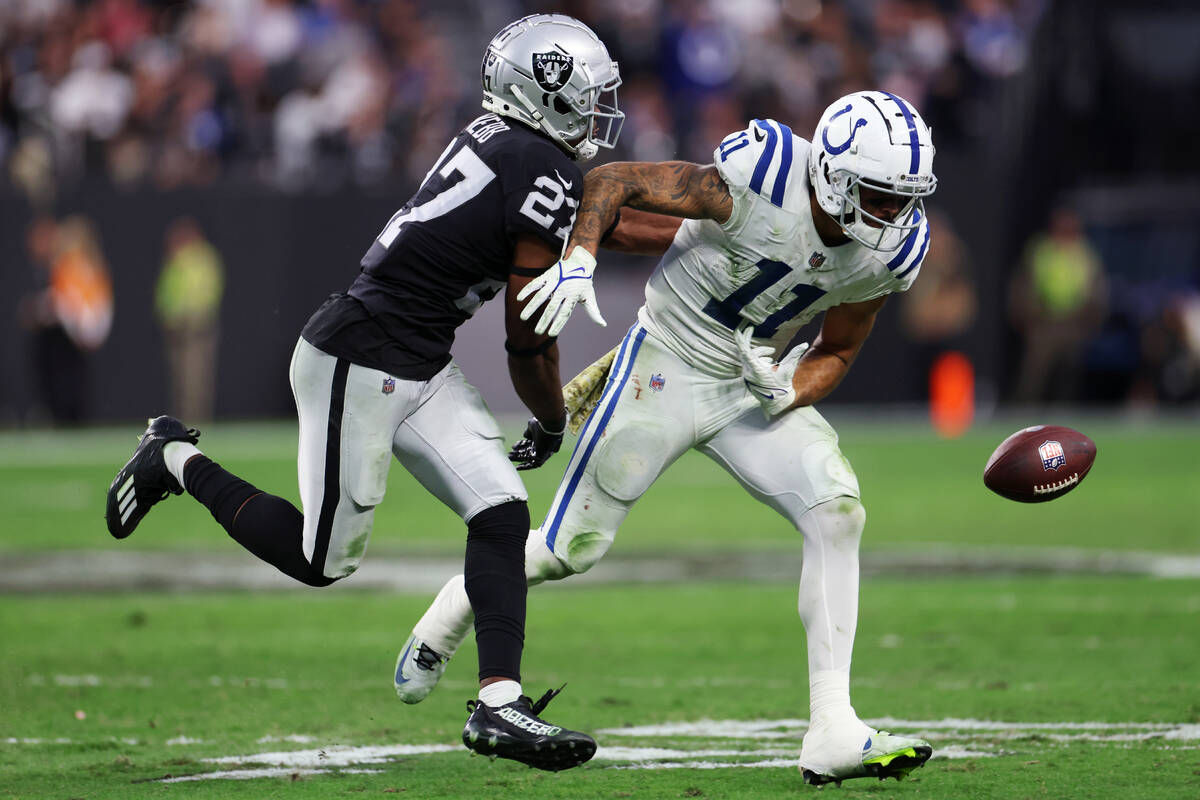 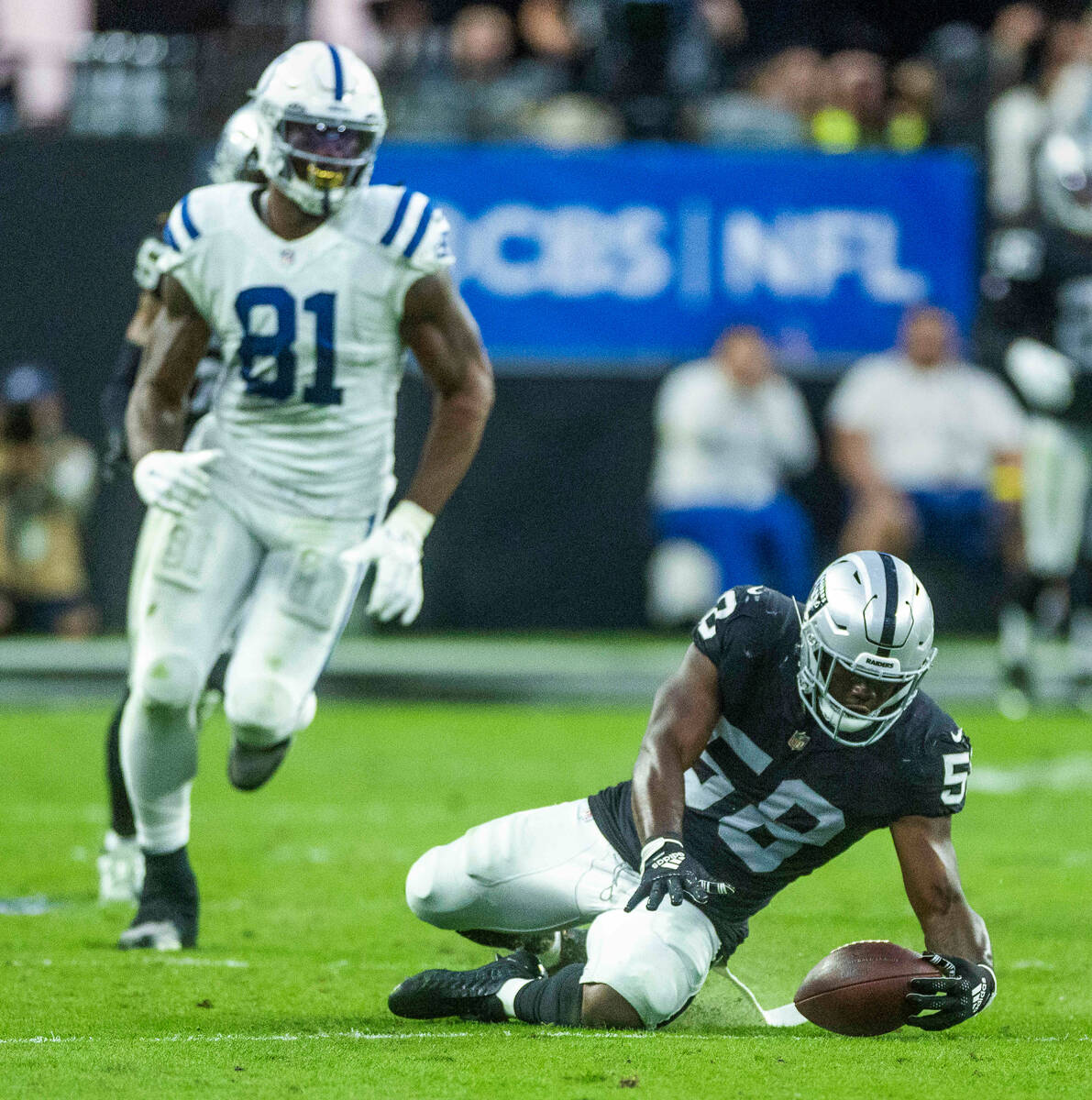 Raiders linebacker Darien Butler (58) attempts to recover a fumble as Indianapolis Colts tight end Mo Alie-Cox (81) moves in during the second half of their NFL game at Allegiant Stadium on Sunday, Nov. 13, 2022, in Las Vegas. (L.E. Baskow/Las Vegas Review-Journal) @Left_Eye_Images 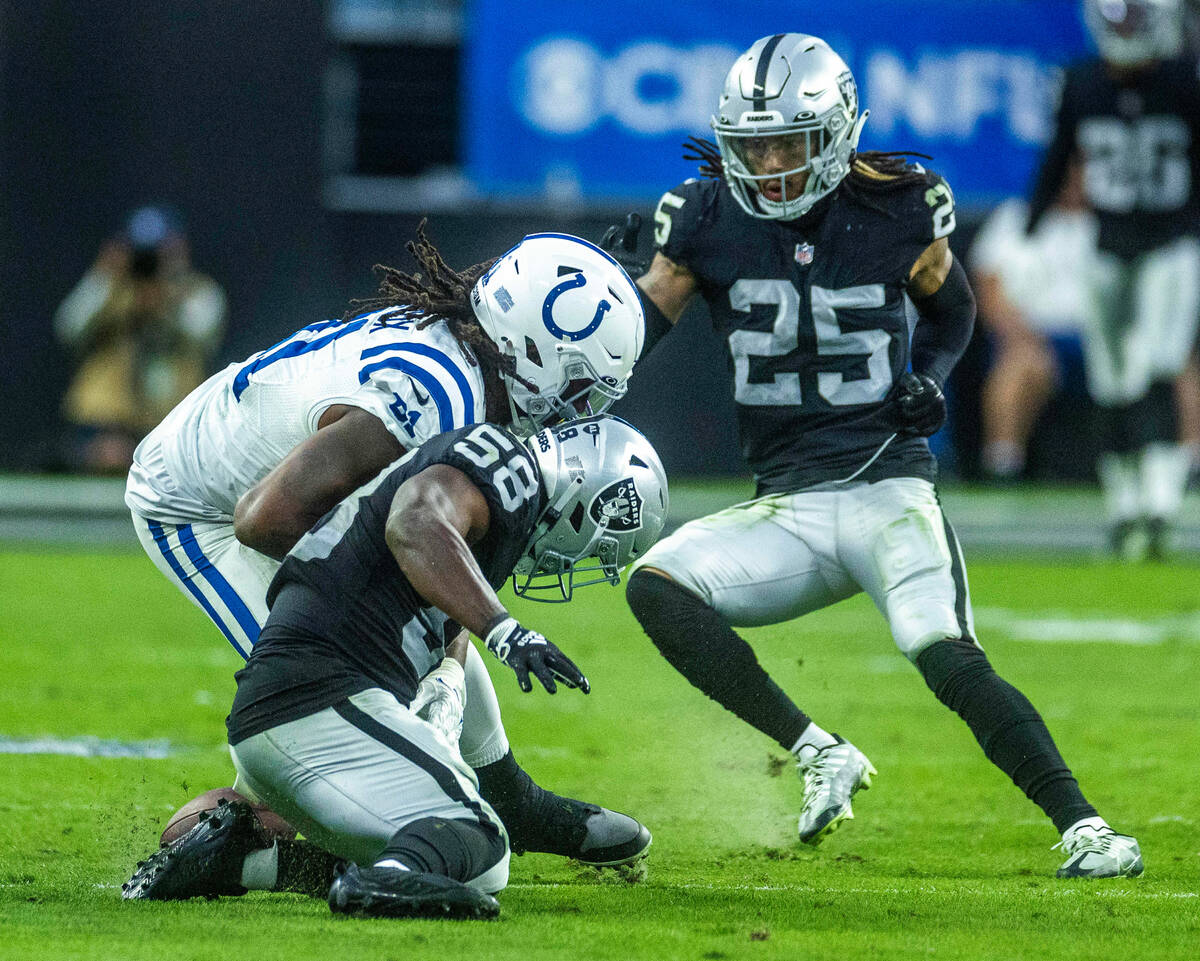 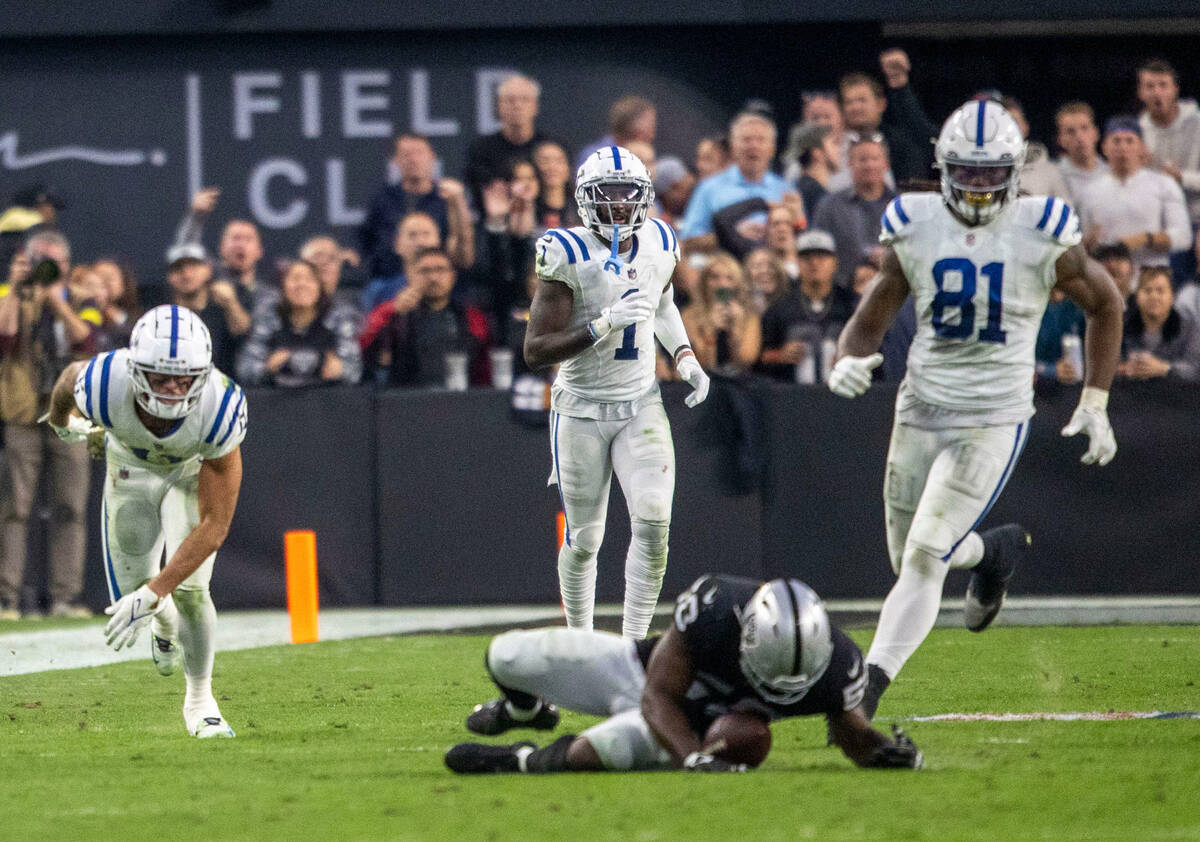 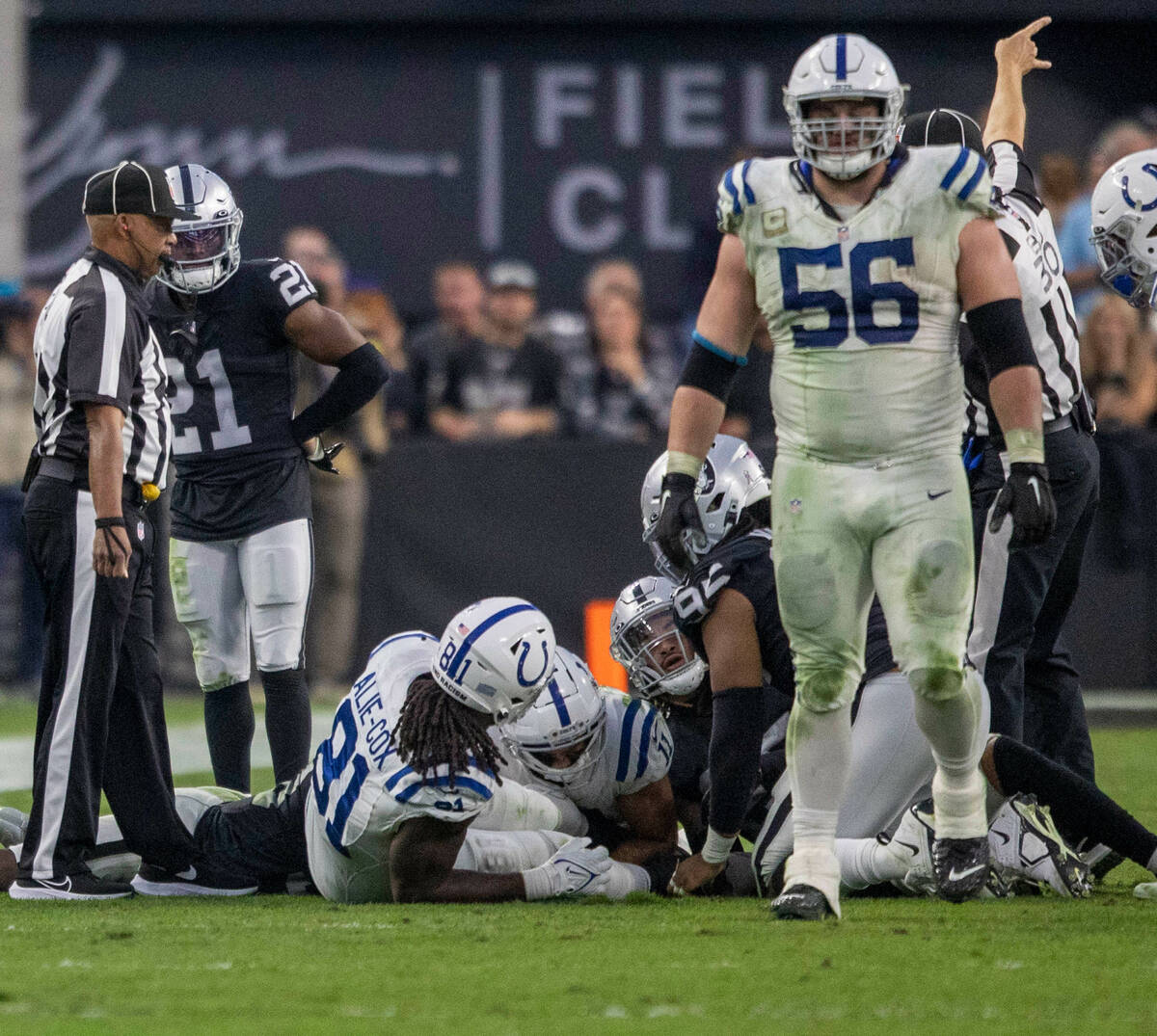 Raiders cornerback Amik Robertson (21) looks on as Indianapolis Colts wide receiver Michael Pittman Jr. (11) recovers his own fumble during the second half of an NFL game at Allegiant Stadium on Sunday, Nov. 13, 2022, in Las Vegas. (Heidi Fang/Las Vegas Review-Journal) @HeidiFang 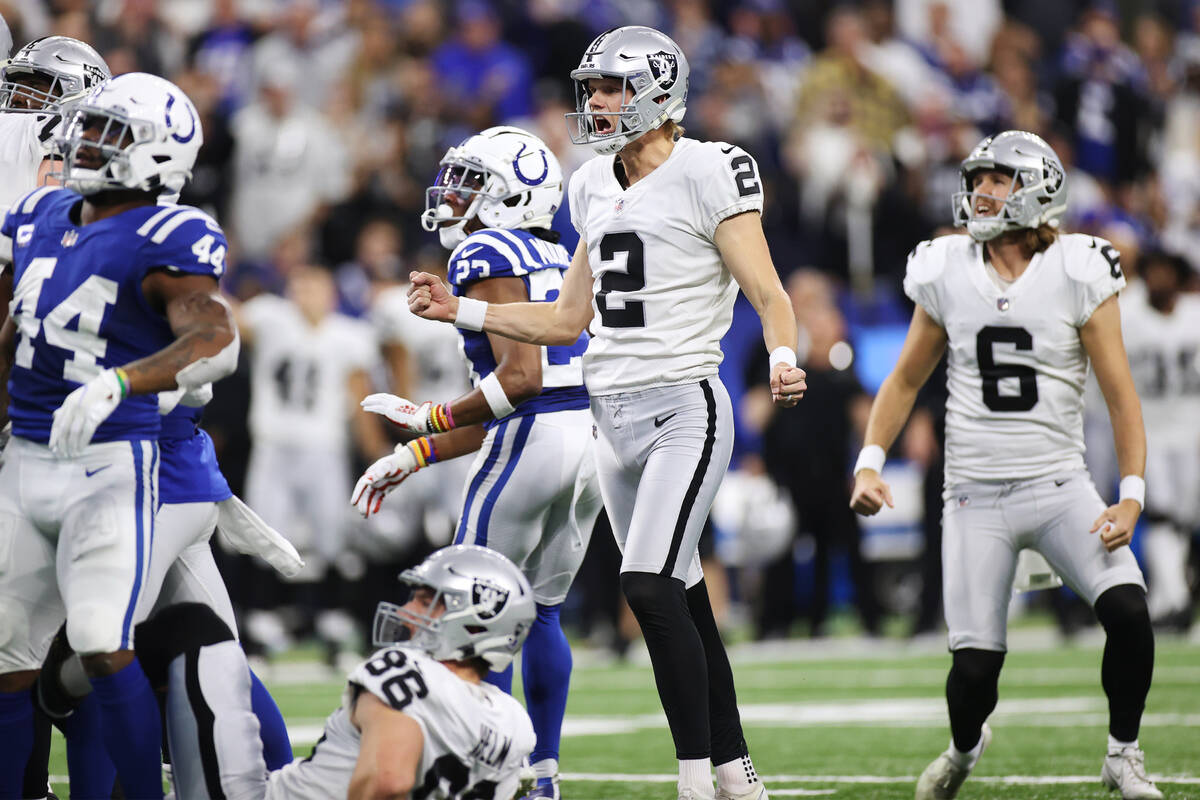 Raiders kicker Daniel Carlson (2) reacts after kicking a game winning field goal against the Indianapolis Colts to end the game in the second half of an NFL football game at Lucas Oil Stadium in Indianapolis, Ind., Sunday, Jan. 2, 2022. (Erik Verduzco / Las Vegas Review-Journal) 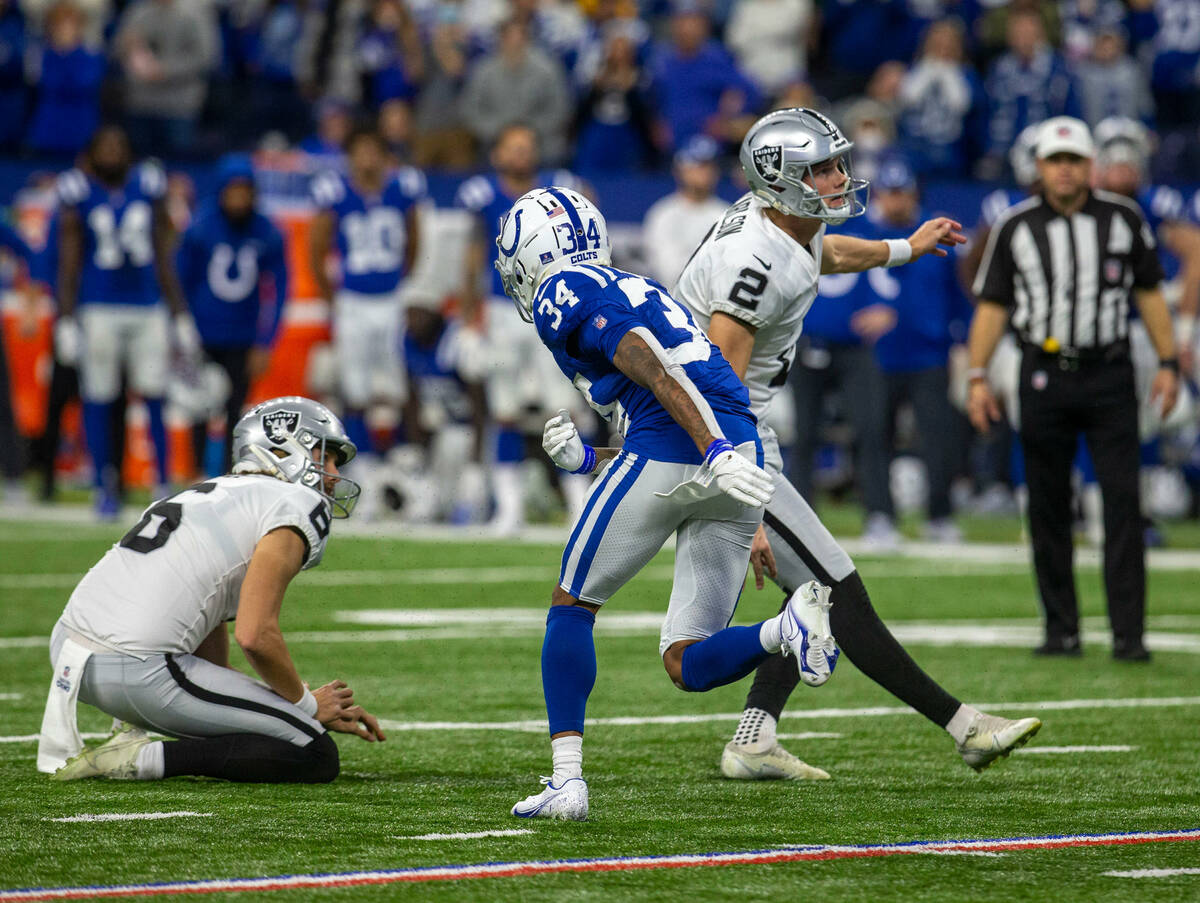 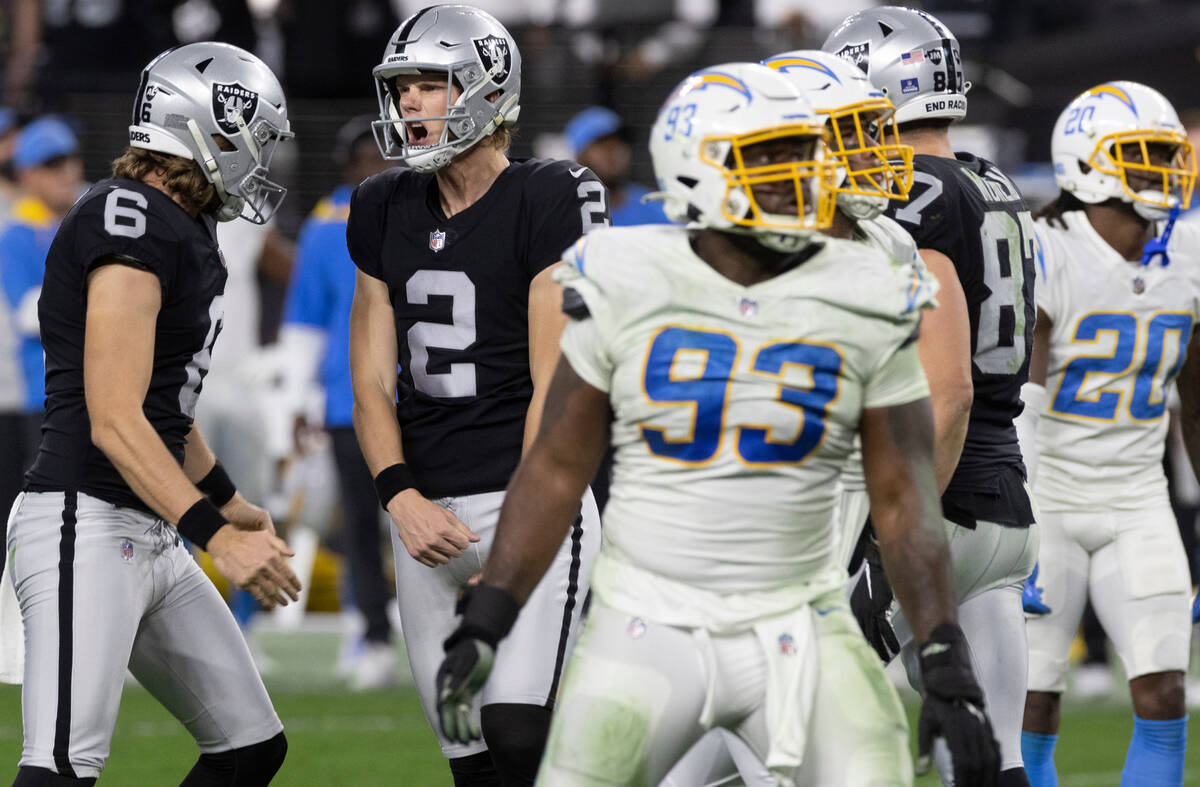 Raiders kicker Daniel Carlson (2) celebrates after kicking the game winning field goal to beat the Los Angeles Chargers in overtime at the end of an NFL football game against on Sunday, Jan. 9, 2022, at Allegiant Stadium, in Las Vegas. (Benjamin Hager/Las Vegas Review-Journal) @benjaminhphoto

There is no specific data, no scientific research compiled for why the pendulum swings one way or the other. The NFL presents a weekly offering of one-score games. They’re more prevalent than blown calls.

It tends to differentiate season to season, how your team fares in those games decided by eight points or fewer. With the Raiders between this season and last, strikingly so.

The team that qualified for the playoffs in 2021 was 7-2 in one-score games, a major reason being its ability to make the biggest plays at the most critical of times.

Or at least having one of the league’s best kickers in Daniel Carlson.

They finished 10-7 in the regular season.

Not so much in 2022 — a 2-7 team entering its game at Denver on Sunday is 0-6 in one-score games. They can’t clinch the close ones to save their lives.

Even though they have possessed the ball with an opportunity to win or tie in all six.

“I think a lot of it boils down to one or two plays breaking from an explosive one on offense or the defense creating a turnover,” said Ben Brown, an analyst for Pro Football Focus. “It’s more random than anything. I’d say it’s never been totally looked at into exactly why they occur. There just hasn’t been a ton of research about why things break one way or the other.

“There is always a luck element to everything. I’d say the same thing about one-score games.”

A new coaching staff. New system. New philosophy. The Raiders are now led by Josh McDaniels, whose attack hasn’t produced the sort of results down the stretch of games that would at least even things out in one-score outcomes.

The narrative from a team perspective follows a similar theme and never changes — that one or two plays, no matter when they might occur in a game, go a long ways in determining which side might prevail when things get tight.

A recent example: The Raiders fell to Indianapolis 25-20 Sunday at Allegiant Stadium. The Colts were driving down 20-19 late in the game when cornerback Sam Webb forced a fumble of Indianapolis receiver Michael Pittman.

But linebacker Darien Butler couldn’t secure the ball for the Raiders, and the Colts regained possession. They then scored on the next play to take the lead for good. The little (huge) things.

If Butler had just fallen on the ball … one play.

“The way I look at it is, there are things we can do in each phase of our team that would help us win those games moving forward,” McDaniels said. “And so, I choose to look at it as if we are close to results that we’re looking for, not super far away from them or not within our reach.”

A main takeaway of his: That the Raiders need only identify areas in which gaps can be closed, ones that would eventually affect the results in their favor. That the team this past week spent much of its practice time trying to pinpoint solutions. That while everyone can talk about what the problems might be, it’s his job to make things better.

But given the difference in one-score outcomes between this season and last, it’s fair to wonder: Was the run to a playoff berth in 2021 more fool’s gold or because of an actual playoff roster?

What’s more indicative of who the Raiders have really been in close games lately — 7-2 or 0-6?

Brown talked about luck, and there is that part to things. In fact, by one metric that studies wins above projected totals, the Raiders were the NFL’s luckiest team last season.

It’s simple: A lot had to break right for them to make the playoffs for the first time since 2016. Like, more than most perceived doable in terms of other teams losing and tiebreakers. It would take a hectic final weeks of the season.

They would win four straight to secure a berth, the final victory a classic 35-32 overtime victory against the Chargers.

It was one of four overtime wins in a season Carlson would make five game-winning kicks.

“It was a playoff roster within the scheme,” said Lincoln Kennedy, a former Raiders All-Pro tackle and current color analyst for the team’s radio broadcast. “They had structure. I thought they were a playoff caliber team with the schemes they had in place, and that’s just not the case this year.”

They also had this: An insatiable desire to play for interim coach Rich Bisaccia.

The Raiders to a man said they would run through the proverbial wall for him, hoping their strong finish might allow Bisaccia to get the job on a full-time basis.

How much such a focused goal had to do with them winning all those one-score games is anyone’s guess, but never discount the power of emotion.

“It’s really about execution,” said Raiders tight end Darren Waller, currently on injured reserve with a hamstring injury. “That’s what this all comes down to. At the end of the day, it hasn’t been there for us this season. We were definitely a playoff roster (last year). But you don’t play the game on paper. The things that have happened this year is not what anyone has wanted or imagined. You can’t just automatically turn 2-7 into 7-7.”

If you’re the Raiders, there are two ways to look at one-score games this season: You can wallow in the fact that six of them have turned into losses or see the positives in how close you came to winning each.

You can let it gnaw at you and tear things down or instill confidence that you’re not that far away from flipping a script.

“I think that’s really been a good message for our team, especially for some of the guys that haven’t been through some of this kind of stuff, that ‘guys, we’re right there,’” the nine-year quarterback said. “It doesn’t matter, like it doesn’t count for anything. But what it does show us is, it’s not like we’re some terrible football team that has no chance every time we go out there.

“Every time we’ve been out there, except for the Saints game (a 24-0 loss), we all felt like we had a chance to win and we’re putting ourselves in position. I think that we want it to happen right now. It just hasn’t happened as fast as we want it to.”

There is no specific data, no scientific research compiled for why the pendulum swings one way or the other. It just hasn’t swung in the direction of the Raiders.

Not like last season, be it lucky or not.