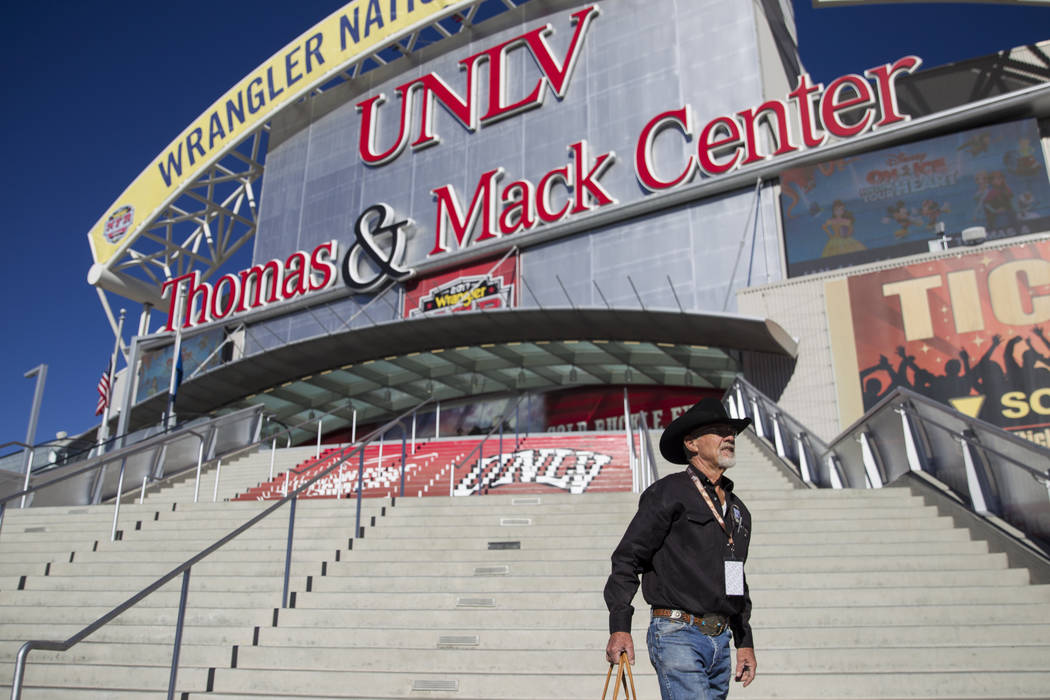 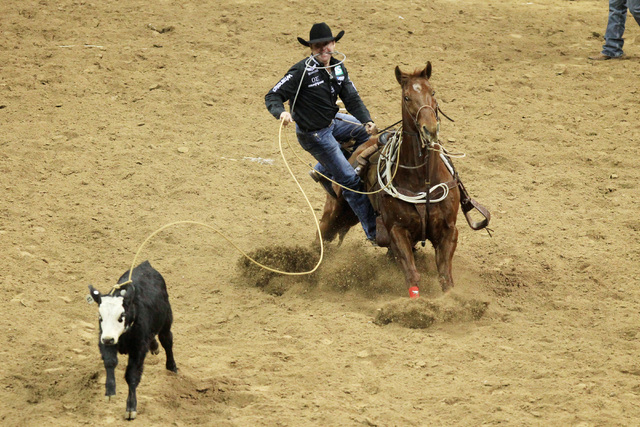 Trevor Brazile from Decatur, Texas, competes in tie down roping during the sixth go around at the National Finals Rodeo Tuesday, Dec. 9, 2014, at the Thomas & Mack Center. (Sam Morris/Las Vegas Review-Journal) 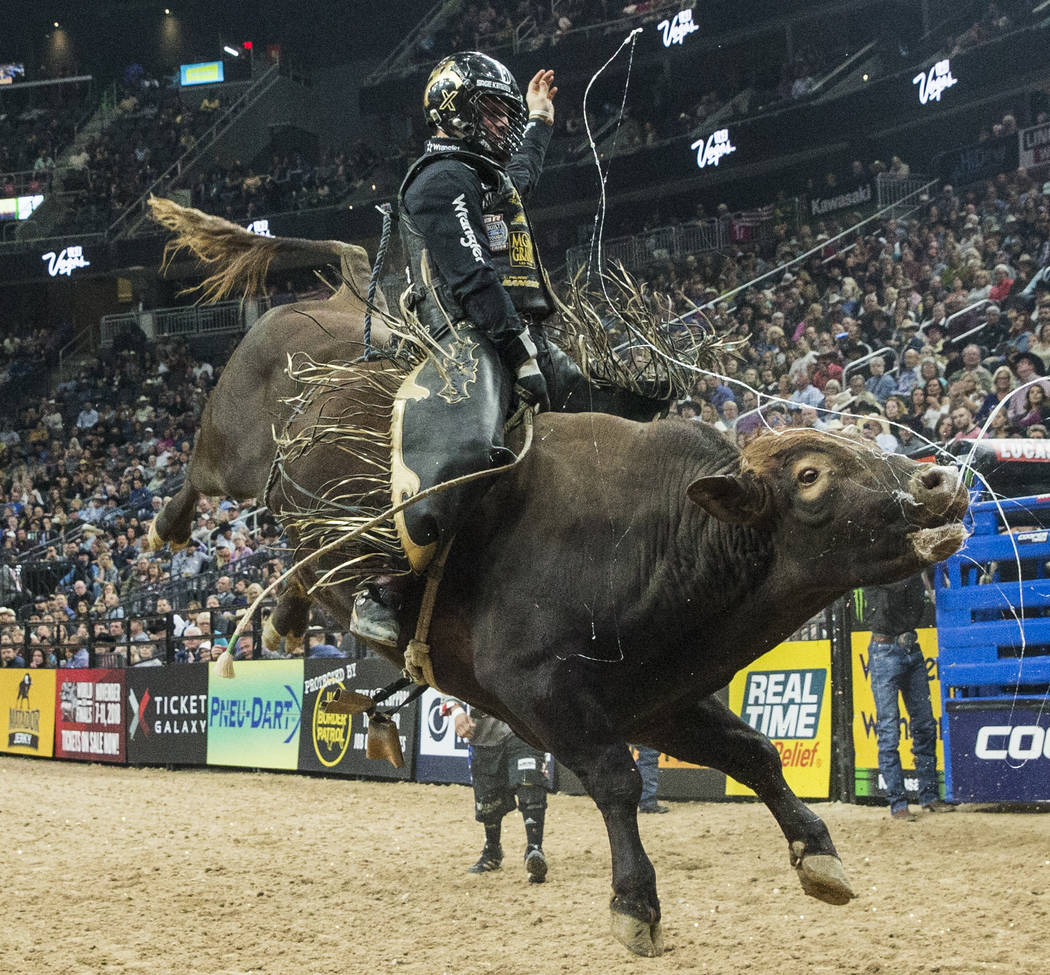 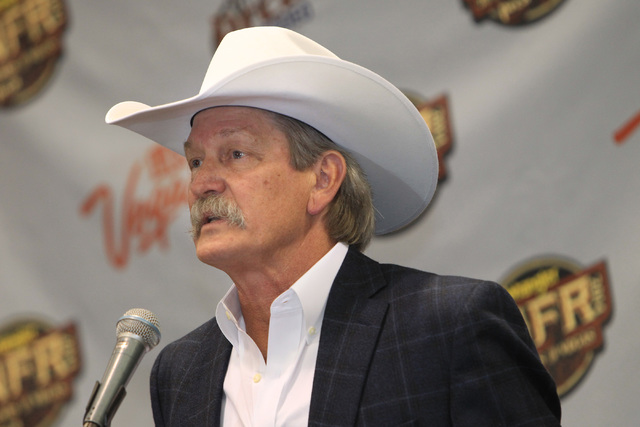 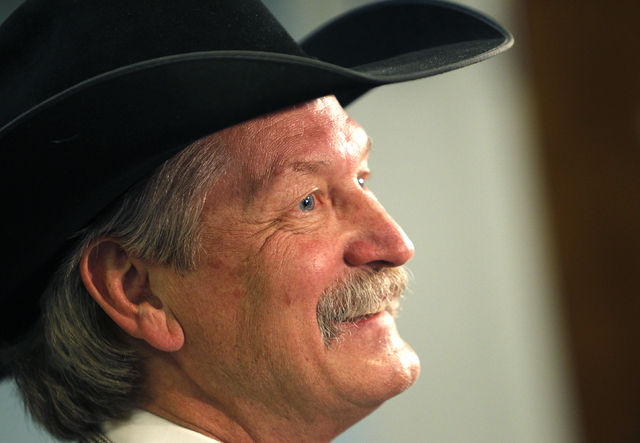 PRCA Chairman Karl Stressman speaks with the media after the LVCVA approved a deal to keep the National Finals Rodeo in Las Vegas during a meeting the Las Vegas Convention Center in Las Vegas Thursday, Jan. 30, 2014. (John Locher/Las Vegas Review-Journal)

The National Finals Rodeo returns to Las Vegas, and with it the city welcomes an influx of rodeo fans and contestants from around the world.

The 10-day event begins Thursday night at the Thomas & Mack Center and runs until Dec. 16. Here are 10 storylines heading into the competition:

After a year away, Trevor Brazile, the winningest cowboy of all time, will enter the 10-day competition searching for his 14th all-around title.

Brazile enters NFR having pocketed $243,760.09 in earnings this season.

Both compete in tie-down roping, making that the event to watch as the all-around race develops over the 10 days.

Cooper enters at first in tie-down roping while Brazile is sixth.

Sage Kimzey has had success in Las Vegas since he burst onto the scene.

The bull rider from Oklahoma became the PRCA’s youngest millionaire a year ago.

At 23, he has a chance to become a four-time World Champion bull rider after winning in each of his first three seasons.

Kimzey will have one of the best chances to repeat from a season ago.

With a $26,000 payout for taking first place on any given night, the standings could be shifting nightly.

Last year, tie-down roper Tyson Durfey went from 14th to first over the course of 10 days.

“It’s given everybody a much better opportunity to end up with a gold buckle on,” commissioner Karl Stressman said. “You’ve just got to get here. You’ve got to get to the Wrangler National Finals Rodeo in Vegas, and then it is a matter of how you perform because of the increase in the dollars.”

With three pairs of brothers competing — twins Jesse and Jake Wright, Jacobs and Sterling Crawley and Cody and Heith DeMoss — saddle bronc riding will be a family affair.

This will be Karl Stressman’s 10th and final NFR as PRCA’s commissioner.

Stressman announced his intent to retire earlier this year. His retirement will be effective Dec. 31.

“It’s been a great experience. It’s been a great ride. I have enjoyed myself,” Stressman said. “I am humbled to be able to be at the helm of the Professional Rodeo Cowboys Association. I think you just know when it’s time to pass the baton to somebody else.”

Because of the dispute between the PRCA and Elite Rodeo Association, some of the top cowboys, like Brazile and Cooper, sat out of last year’s NFR.

That paved the way for a record 39 first-time qualifiers.

This year, with some of those vets back, there will be a good mix of both.

Prior to the beginning of the event, there will be a tribute to the victims of October’s mass shooting on the Strip.

In honor and remembrance of those who lost their lives, PRCA COO Aaron Enget came up with the idea to retire back No. 58 for the competition.

Outside of the Thomas & Mack Center, there will be plenty of other entertainment options.

There will be concerts around town, contestant autograph sessions and more.

A schedule of events can be found on nfrexperience.com.