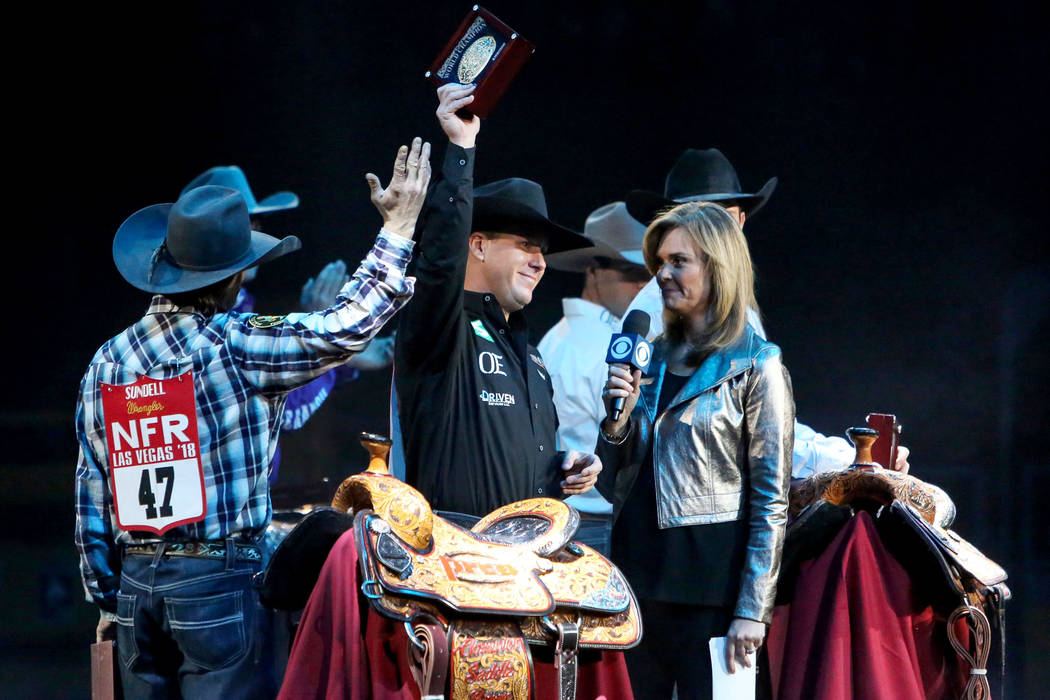 Trevor Brazile of Decatur, Texas (2) is honored on stage after becoming the 2018 PRCA all around world champion during the tenth go-round of the National Finals Rodeo at the Thomas & Mack Center in Las Vegas, Saturday, Dec. 15, 2018. Caroline Brehman/Las Vegas Review-Journal 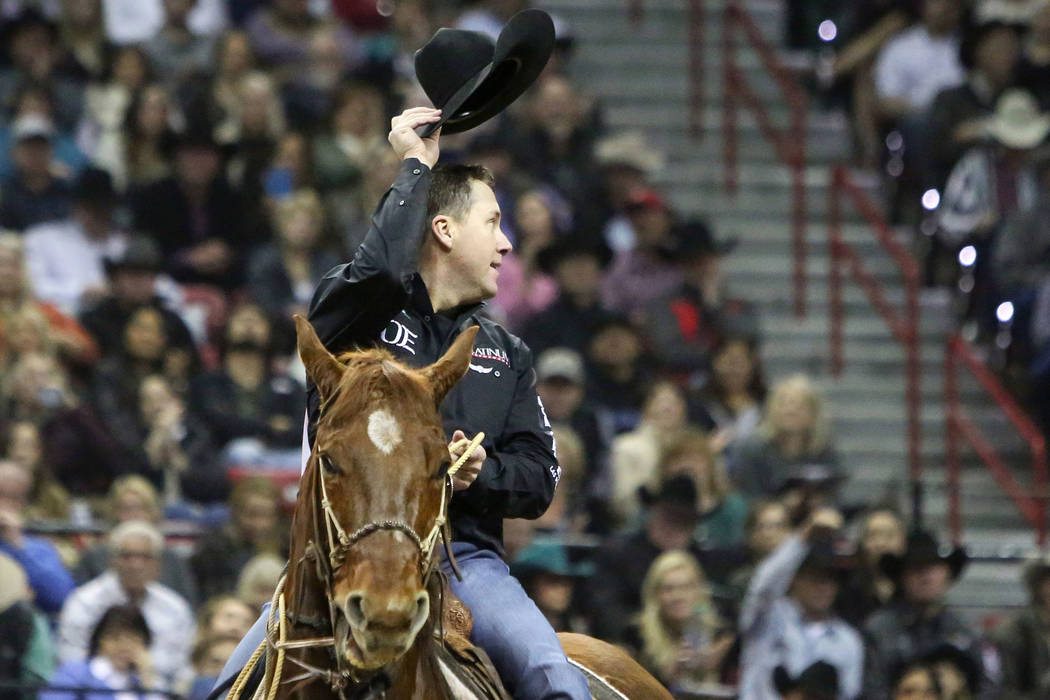 Trevor Brazile of Decatur, Texas (2) tips his hat after competing in tie-down roping during the tenth go-round of the National Finals Rodeo at the Thomas & Mack Center in Las Vegas, Saturday, Dec. 15, 2018. Caroline Brehman/Las Vegas Review-Journal 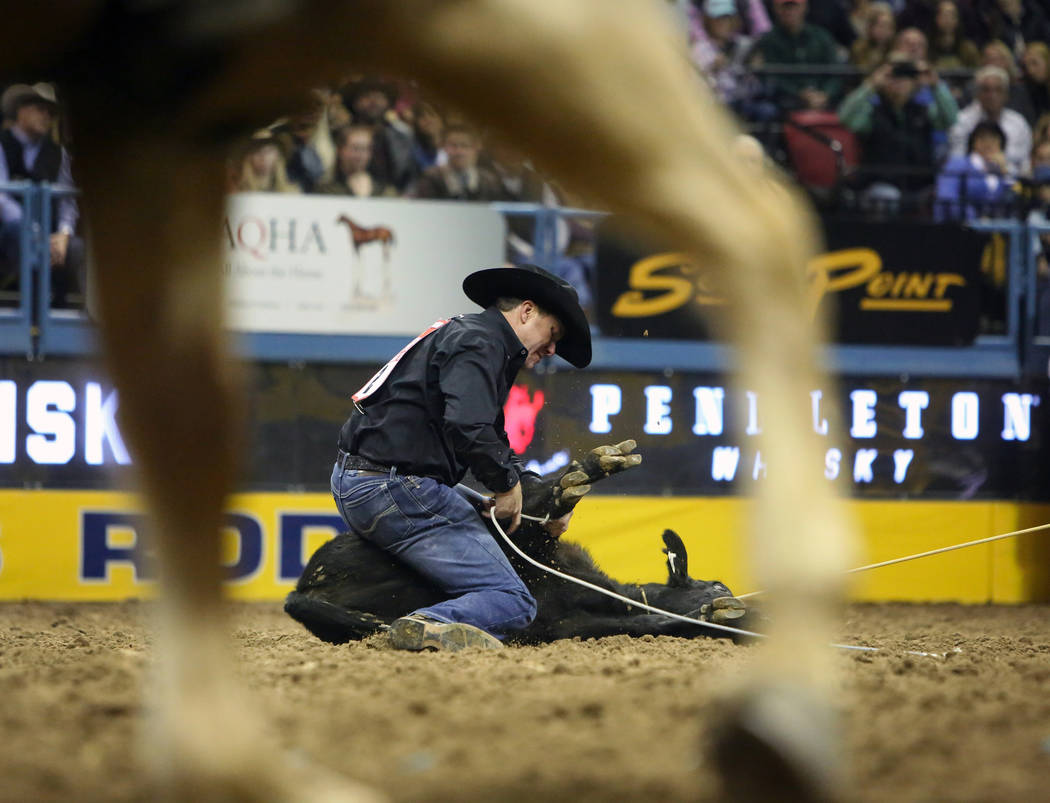 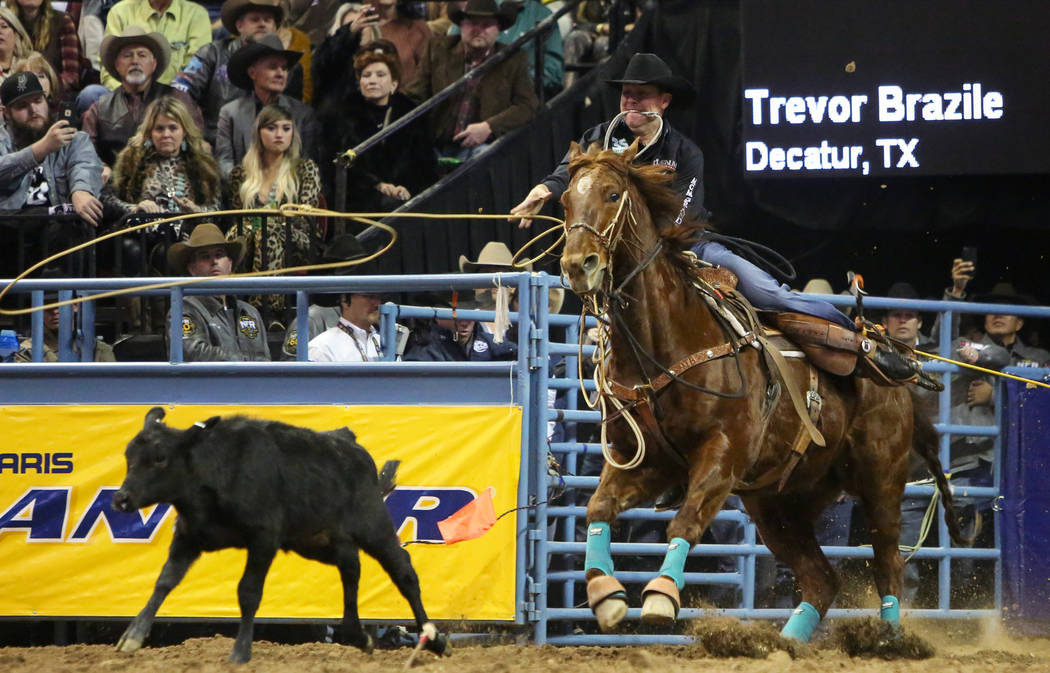 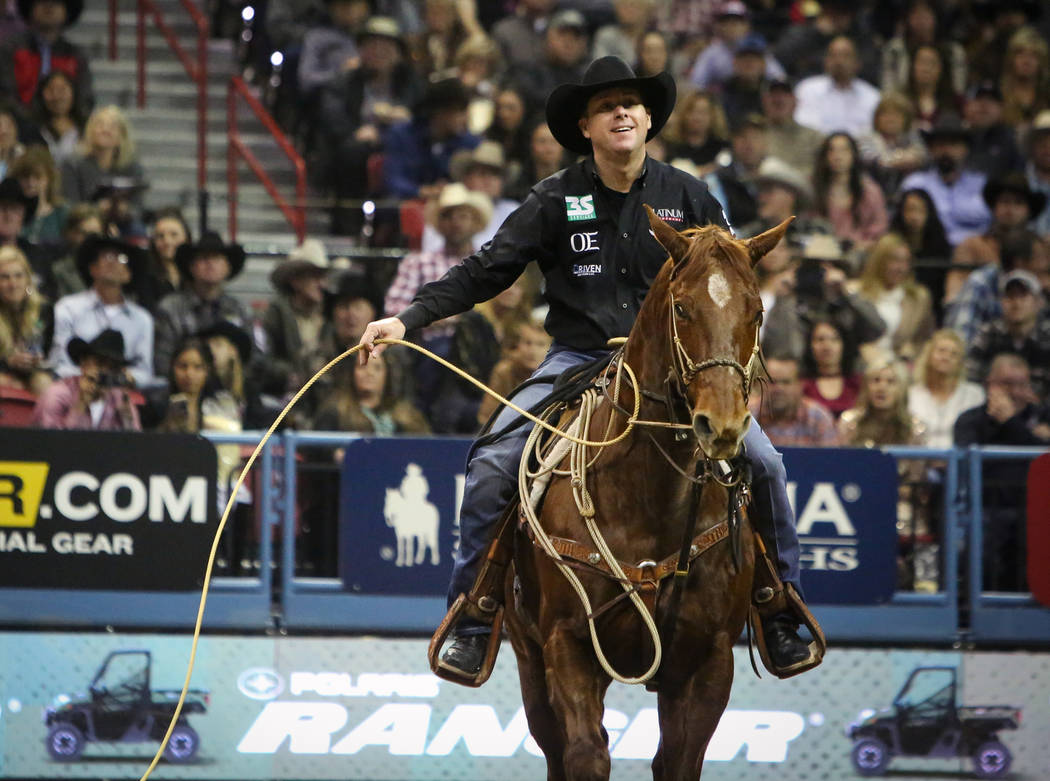 Trevor Brazile had nothing more to prove.

Not after 23 world titles, 13 all-around titles and more than $6.4 million in winnings from the Professional Rodeo Cowboys Association. But one last National Finals Rodeo meant one more chance for the 42-year-old to showcase his greatness.

Brazile, who is retiring from full-time competition and most likely won’t compete in enough rodeos to qualify for the NFR again, was the last of the world champions to accept his gold belt buckle at the end of the event inside the Thomas & Mack Center.

Call it a curtain call for the Las Vegas crowd he wowed for so long.

“Until I won tonight, that first one was the most special,” Brazile said. “I don’t think anything is going to be able to top this.”

Brazile turned pro in 1996 and spent the past 22 years establishing himself as perhaps the greatest cowboy in rodeo history. He bested fellow legend Ty Murray’s record of seven all-around PRCA world titles in 2010 and added several additional titles in the subsequent eight years.

There’s no type of roping he can’t do, and he showed that again Saturday.

Brazile trailed Cooper by about $12,000 entering the 10th and final tie-down roping go-round, but corralled and tied his calf in 7.20 seconds to win. Cooper got called on the jerk-down rule and did not record a time, allowing Brazile to surge into first place with the $26,330.77 prize.

“I’m going out like this,” Brazile said. “This whole thing is such a roller-coaster ride. It’s crazy to say that, as many times as I’ve been here. I’ve won and I’ve lost, but I’m just honored to be a part of it for as long as I was.”

The Zwingle, Iowa, native was thrown from his horse after completing his go-round but wasn’t seriously injured and scored 87 to clinch the championship with $319,801.18.

“Feels just like the first one” he said with a grin.

Waguespack, of Gonzales, Louisiana, finished all 10 rounds in a total of 44.5 seconds — the fastest of any NFR competitor — to win the event’s aggregate and clinch the world championship with $260,013.35.

The 28-year-old won his first world championship in 2016.

Neither Clay Smith, of Broken Bow, Oklahoma, nor Paul Eaves, of Millsap, Texas, had won a PRCA world title. That changed Saturday.

The duo finished third in the NFR aggregate and totaled $289,921.48 for the season to hold off Kaleb Driggers and Junior Nogueira — and their $272,464.48 — for their first world team roping title.

Wade Sundell hadn’t competed in a NFR since 2015. Safe to say he’s happy to be back.

Sundell, 33, completed nine of 10 go-rounds and totaled 783.5 points to finish second in the aggregate and first in world earnings with $280,636.28 for his first world saddle bronc riding title.

“One of the amazingest things ever,” said the Boxholm, Iowa, native, who lost his house in a fire this year. “I don’t know what to say. … One of the greatest feelings ever.”

“The first one I was young, and I was just roping,” he said. “I came out here to rope and do it for my family. To have another world championship and average championship is awesome.”

The 24-year-old from Cotulla, Texas, completed her go-round in 13.95 seconds and celebrated her second consecutive world title with a total of $350,699.83.

Sage Kimzey was greeted in the media room by his girlfriend, Alexis Bloomer, upon the NFR’s conclusion.

“I’m going to cry all night,” she said amid tears of joy.

Kimzey, 24, of Strong City, Oklahoma, won his fifth straight bull riding world championship with a total of $415,262.82. He scored a 93 on Saturday to win the final go-round.