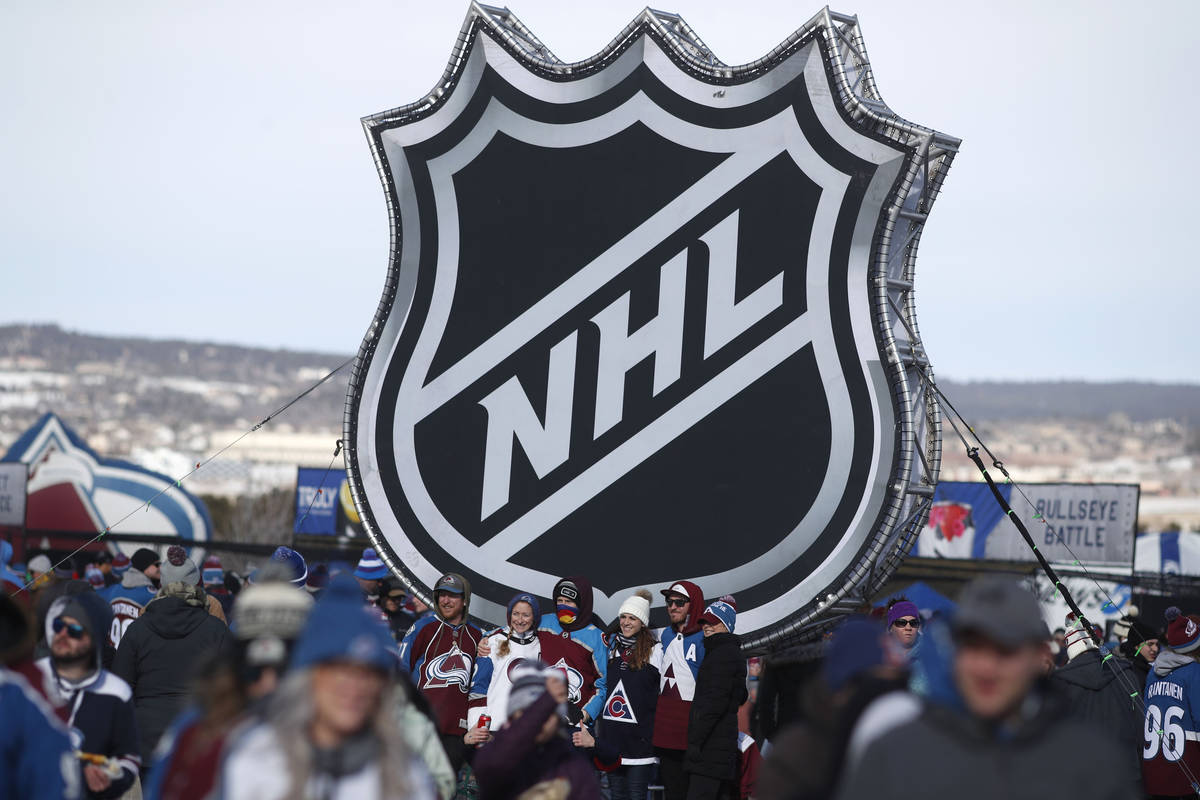 FILE - In this Saturday, Feb. 15, 2020, file photo, fans pose below the NHL league logo at a display outside Falcon Stadium before an NHL Stadium Series outdoor hockey game between the Los Angeles Kings and Colorado Avalanche, at Air Force Academy, Colo. The NHL nailed down the final details of a playoff format if the season can resume on the same day word came out that another player has tested positive for the coronavirus. (AP Photo/David Zalubowski, File)

Christmas has come early for NHL players, only Santa Claus has been replaced with a Facility Hygiene Officer. Instead of presents, all fun can be found in a 22-page memo.

Which isn’t bad, considering the NCAA’s Division I manual is 441 pages and many who run collegiate athletics don’t understand half of it.

Phase Two by which hockey hopes will accelerate things toward a return to play begins Monday, meaning the Golden Knights and 30 other teams can have players on the ice again while implementing precautions designed to keep them safe.

It’s a needed step forward, complete with masks and color-coded badges to ensure any malcontents (read: media) stay as far away from the bubble of cleanliness as possible.

Here’s a synopsis of those 22 pages and some of the more pointed directives:

— A maximum of six players will be allowed to practice at once. This will make for wide-open space with no contact, sort of what we saw from the Golden Knights’ penalty kill when the league paused because of COVID-19.

Also, players who live in a city whose team they do not play for are allowed to use facilities. In this dreamlike scenario, if you told me Alex Ovechkin somehow found himself at City National Arena while walking through the locker room holding aloft his Stanley Cup championship ring and swigging from a bottle of Dom, I’d stop right here.

— Any player traveling to his team facility from abroad while choosing the A Group on Southwest Airlines instead of a private jet must quarantine for 14 days. Carpooling is also discouraged, perhaps the one edict that upsets me most.

If there is one vision I want more than any other, it’s Knights defenseman Nate Schmidt screaming from the back of a station wagon for driver and team owner — I mean, president of hockey operations — George McPhee to stop for slurpees on the way to practice.

— Goalies can hire an independent coach to work with one-on-one. The idea of Marc-Andre Fleury and Robin Lehner seeking guidance from former Knights goalie coach Dave Prior would be the ultimate of storylines. Alas, the person can’t be a team employee, and the last we heard of Prior, he was assuming a management role in Ontario.

You know, after he “stepped down” from his position with the Knights.

— Players should constantly wash their hands and use sanitizer. No sharing of towels or flip-flops. (That happens?) Shower elsewhere. Drink from your own water bottle. Eat your own food. Stand 6 feet apart at all times. In other words, welcome to my house.

— The colored badges will designate a player’s access and that for nonplayers. If everyone remembers kindergarten — the badges shaped like an apple are for important kids and the orange ones for slackers — this part should run smoothly.

— Coronavirus testing will occur 48 hours before entrance to the facility and then twice weekly. Players and personnel also must complete symptom and temperature checks in accordance with a self-screening protocol before departing for the facility. This will be followed by another such examination from the Facility Hygiene Officer — translation: my wife — upon arrival.

The condition of any player testing positive will be treated as a hockey-related injury. This means if anyone is seen coughing uncontrollably while appearing feverish, the Golden Knights will label his status as “an upper body injury of which there is no specific timetable for return.”

While releasing such information at 10:30 p.m.

— Players who use the team facility to skate may not do so at a different public rink, meaning Vadim Shipachyov will continue working out alone at the Las Vegas Ice Center.

— Coaches aren’t allowed to participate in on-ice activities but may observe from a designated area of the facility.

I suppose this means Knights coach Pete DeBoer will watch things with McPhee and general manager Kelly McCrimmon from their glass-encased perch.

There you have it. The main components of Phase Two.

Someone hand Fleury an apple-shaped badge and get on with it.