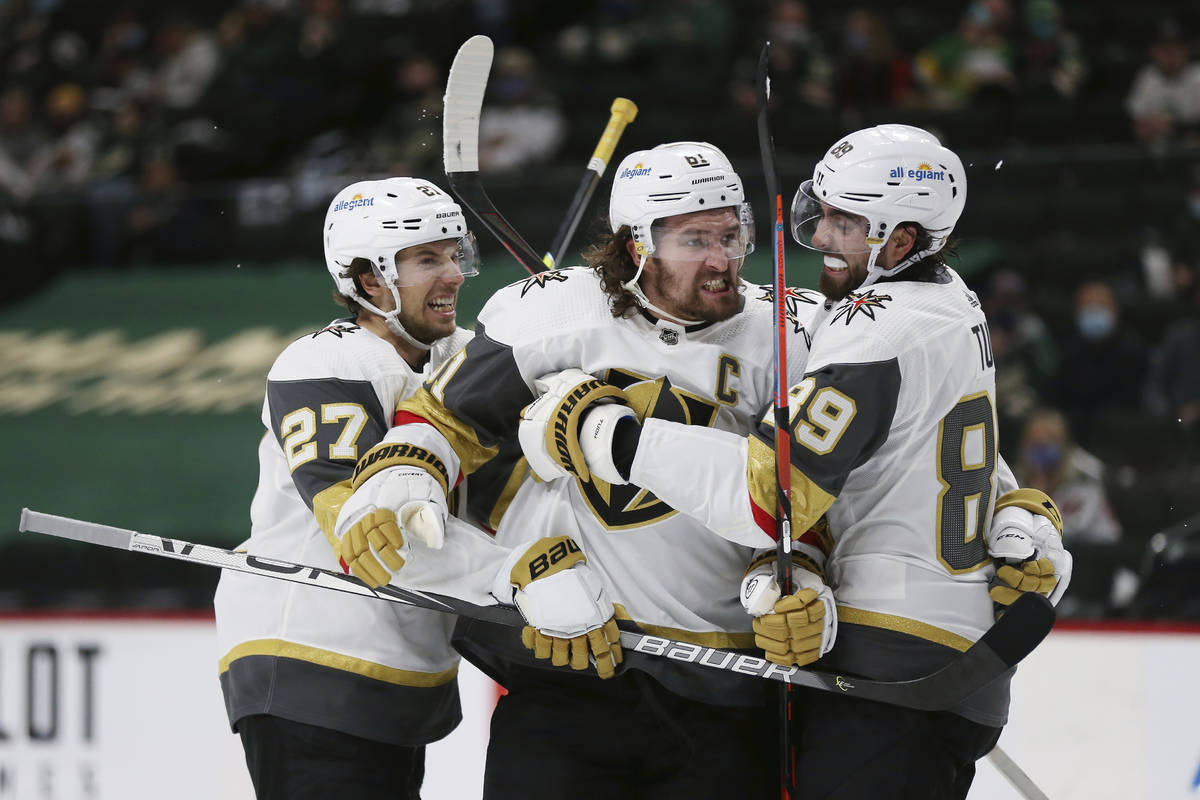 Vegas Golden Knights' Mark Stone (61) celebrates with teammates after scoring a goal against the Minnesota Wild during the second period in Game 3 of a first-round NHL hockey playoff series Thursday, May 20, 2021, in St. Paul, Minn. (AP Photo/Stacy Bengs) 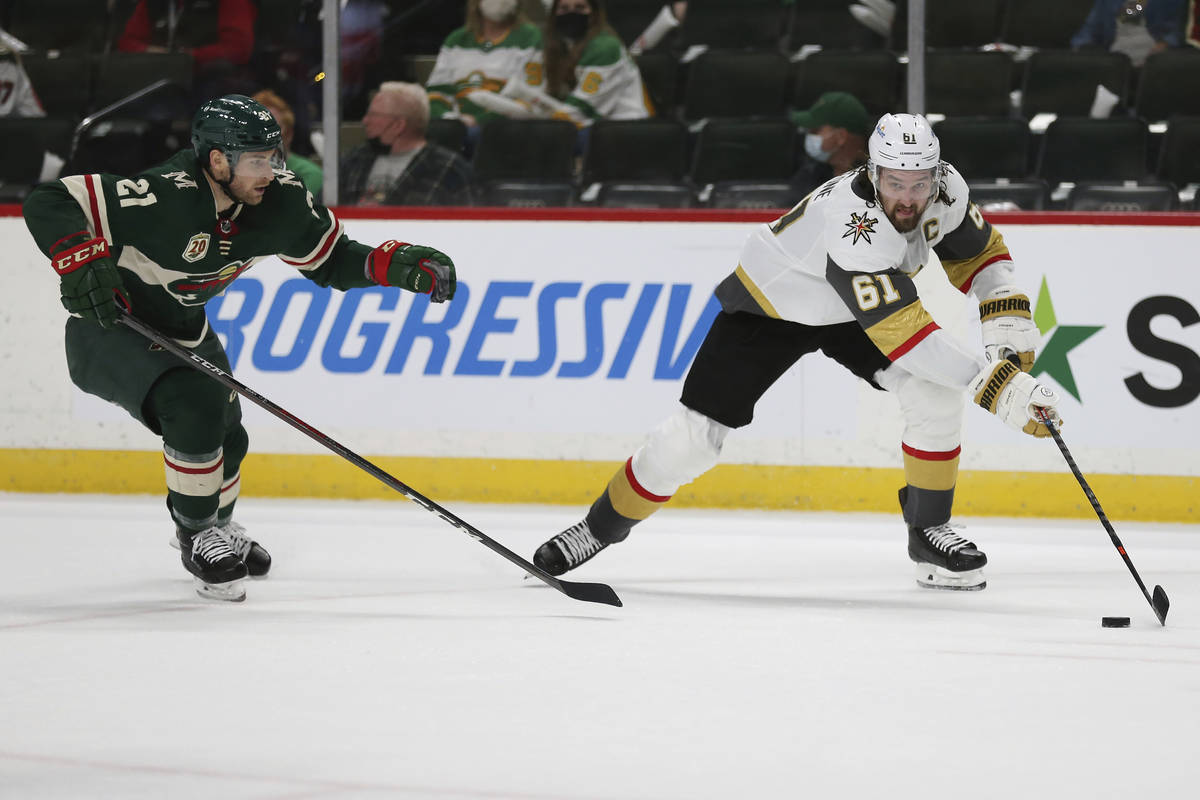 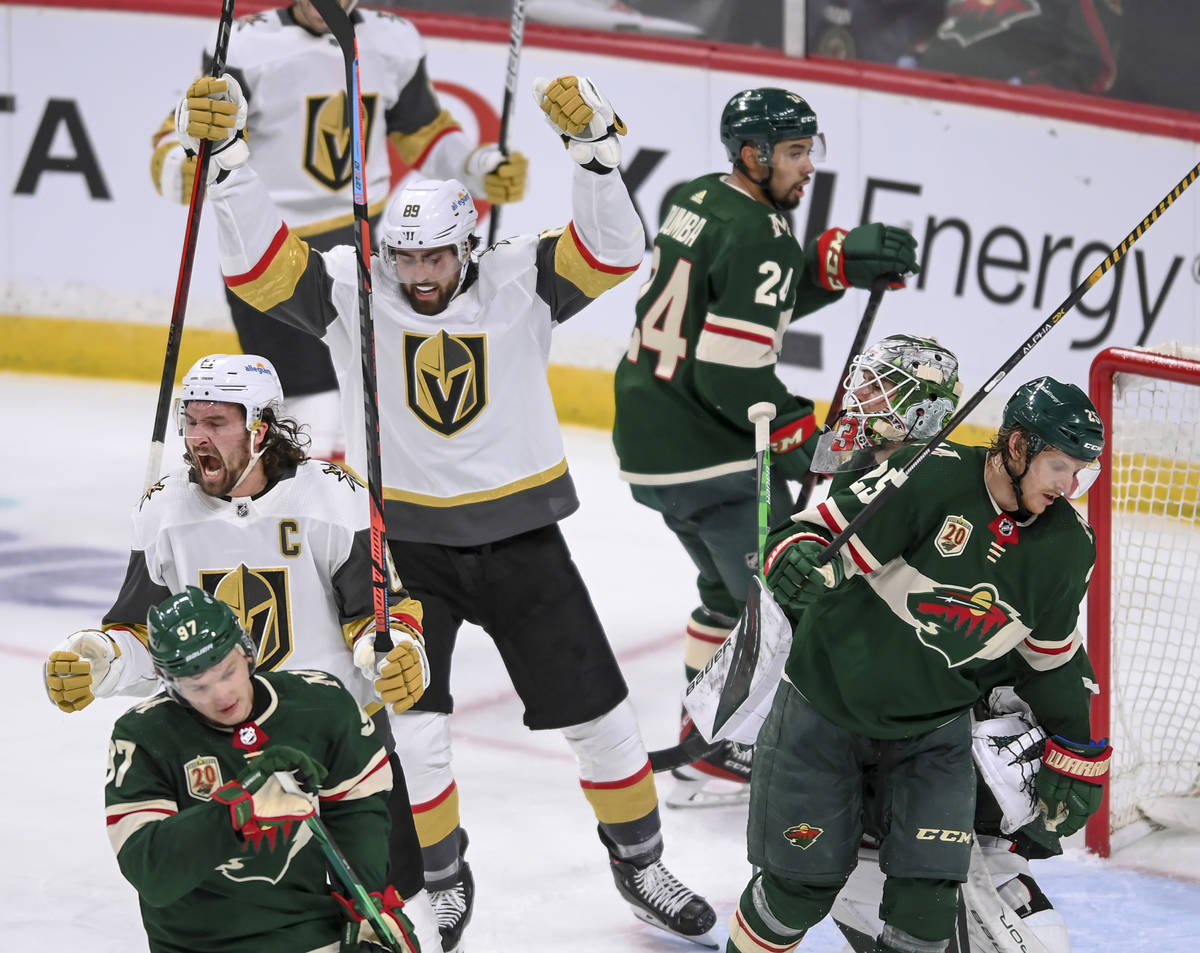 Want crazy? Mark Stone scored twice Thursday night in leading the Golden Knights to a 5-2 win over Minnesota in Game 3 of their best-of-seven divisional playoff series at Xcel Energy Center.

It might not have been his most important contribution.

The Knights lead the series 2-1 and have regained home-ice advantage because somewhere between the first and second periods Stone and others had some words in the room about what transpired the first 20 minutes.

“We had a lot of guys step up,” Stone said. “We knew we had to be better. I think sometimes guys get sick of hearing from me.

“We got a little smack from (coach) Pete (DeBoer) to get us going. We just weren’t prepared at (the start). But it’s better to be down 2-0 after 20 minutes than after the game ends.”

This is when a captain’s value is so incredibly important. When he leads on and off the ice. In these moments. When things couldn’t be going any worse.

I sort of wish, however, it was only Jonathan Marchessault channeling his inner Alex Ovechkin on everyone in the room, only in French and not Russian.

Because that would have been incredible.

Look, something had to be done. The Knights were more disjointed those first 20 minutes than drunk Uncle Tommy’s stories on Thanksgiving.

Turnovers in the defensive zone. Getting beat to loose pucks time and again. Losing the battle of the boards. The Wild led 2-0, and it could have been twice that. It would have been 3-0 had DeBoer not won an offside challenge after a Wild goal.

And then folks spoke in the room between periods.

And then a light was switched.

The Wild have spent three games now in the series trying like anything to match their best line defensively against Stone and whoever he might be taking alongside.

It worked for 140-plus minutes. But then Chandler Stephenson found Stone in the slot, and he scored to bring the Knights within 2-1 at 8:39 of the second period. It was all Knights from there.

“Mark is a great captain and leader for this team,” Smith said. “I think his biggest asset is on the ice and what he’s able to do. He scores that (first) goal for us and then the one late to ice the game. That’s what you need from your best players.”

Playoff hockey is thought the best postseason drama that sports know, and nothing supports such a belief more than the mystery of it all. Anything can happen. Anyone can be a hero.

Like, well, curse breakers being guys such as Patrick Brown and Nick Holden.

The Knights had not won a game in regulation in Minnesota until Thursday. But weird things happen this time of year, man.

DeBoer inserted Patrick Brown on the fourth line for the injured Tomas Nosek, and all Brown did was score to make it 2-2 with 4:41 remaining in the second period. DeBoer also replaced defenseman Nic Hague with Nick Holden, and all Holden did was assist on two of three second-period goals.

The Knights needed all of it. Their captain scoring twice. Several voices in the room speaking up. Two guys thrown into the line for such a critical game and contributing mightily.

All of it and more.

“Nothing went right (in the fist period),” DeBoer said. “But we came after it, and the message was that I liked how our group felt. The game was a long way from over. I really felt we could win if we gave ourselves a chance and started playing our game. And the guys took it from there.”

Took it right to a series lead and back to owning home ice.

Took it by following their captain.