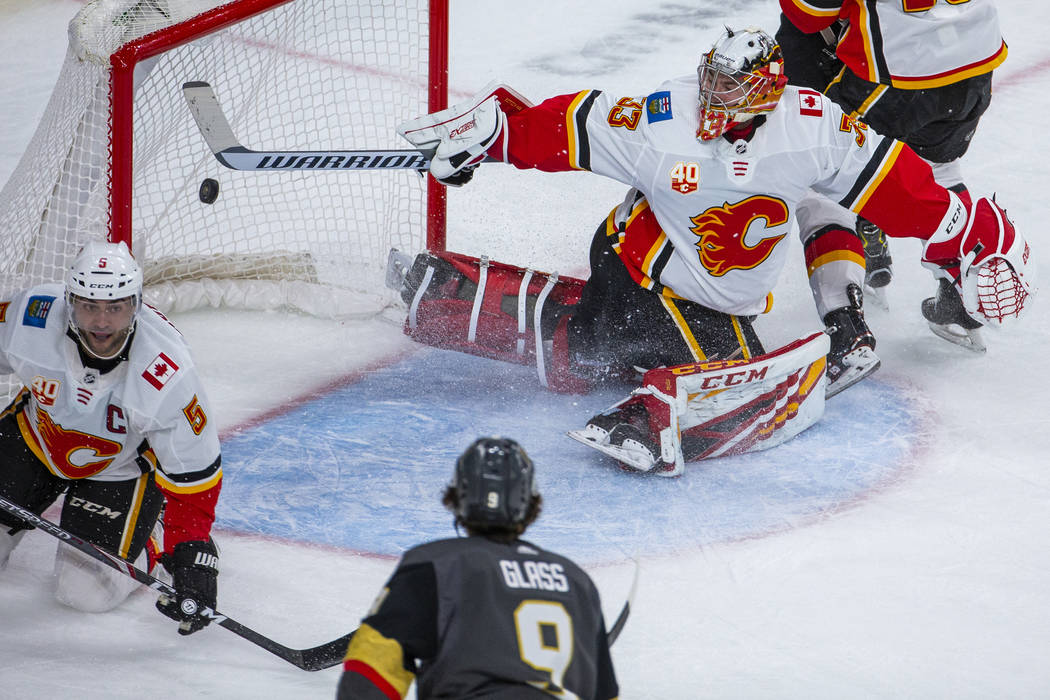 Calgary Flames goaltender David Rittich (33, top) is unable to stop a shot into the net by Vegas Golden Knights center Cody Glass (9) during the third period of their NHL game at the T-Mobile Arena on Saturday, Oct. 12, 2019 in Las Vegas. (L.E. Baskow/Las Vegas Review-Journal) @Left_Eye_Images

Here’s another reason Cody Glass has a chance at delivering a long and successful NHL career: He’s not all that worried about Cody Glass.

“I come in every day just happy that I’m still here,” the Golden Knights rookie said.

It’s another example of a birth certificate saying a guy is 20 years old and him acting with a heightened sense of maturity, Glass not nearly preoccupied with his immediate future as others.

Glass learned Saturday that at least one key roster move wouldn’t translate to him being removed from the lineup, as Cody Eakin made his season debut following injury.

Eakin centered the third line, and Paul Stastny was elevated to do the same on the second of a 6-2 victory over the Calgary Flames before an announced gathering 18,192 at T-Mobile Arena, meaning Glass as a center needed a new home.

He found it as a right winger on the third line, evidence that coach Gerard Gallant was as much action as words when saying Glass deserved to remain in the lineup once key veterans began returning.

Glass found the scoreboard at 17:12 of the third period, when his backhanded pass instead struck a Flames defender and bounced into the net for Glass’ second career goal.

The real test to lineup stability probably won’t come until Alex Tuch returns from long-term injured reserve, and that can’t occur until after the 10th game.

Until then, the first draft pick in franchise history tries not to think about much other than his next shift, from whichever spot it comes.

“In today’s NHL game, a lot of times centerman take the draws and then they’re all over the ice,” Gallant said. “That’s the way the game is played. I think it’s more in their heads than anything else. Would I like to see (Glass) playing center? Yes, I would. But is it a big issue with him going to the wing? It happens all the time with young players. He’s a solid kid mentally. No issues there at all.”

It was an obvious move with Eakin returning. Gallant had to get Stastny back with Max Pacioretty and Mark Stone, because if you can name five better second lines in hockey, well, we’re waiting …

The line produced two of the team’s goals Saturday, with Stone and Stastny scoring off assists from Pacioretty.

Glass was competent centering the second line at even strength in the first four games, better on the power play and not good at all when taking faceoffs, but Gallant obviously liked more of what he saw than not.

So he remained on ice and played alongside Eakin and Valentin Zykov while a struggling Brandon Pirri traded his sweater for a suit.

“I think (Glass) has played pretty well,” Stone said. “He’s learning ways to succeed in this league, which isn’t easy. At 20 years old, it’s a tough league to maintain for 82 games.”

Here’s the important part: Where do the Knights envision Glass over the season?

Where could they see him fitting come April and (likely) playoff time?

If it’s a position of importance, then perhaps Glass remains at right wing when Tuch returns and Gallant tries a third line along with Eakin that, in a short window of just under nine preseason minutes, was unproductive and disjointed.

It wasn’t a good look at all.

Maybe things get crowded and there comes a time when Glass is healthy scratched to the press box or even sent back to Chicago and the American Hockey League.

One thing is for sure: The last guy worrying about Cody Glass will be Cody Glass.

“If I would get taken out of the lineup, the next opportunity that came, I’d do my best to take advantage of it,” Glass said. “Just try and learn from the older guys. They’ve been very good to me and talking to me about everything. Just not to let things get in your head about lineups changes. They’ve all been through it.

“There is stuff you just can’t read into and just have to show up to the rink each day and work.”

And still in the lineup.