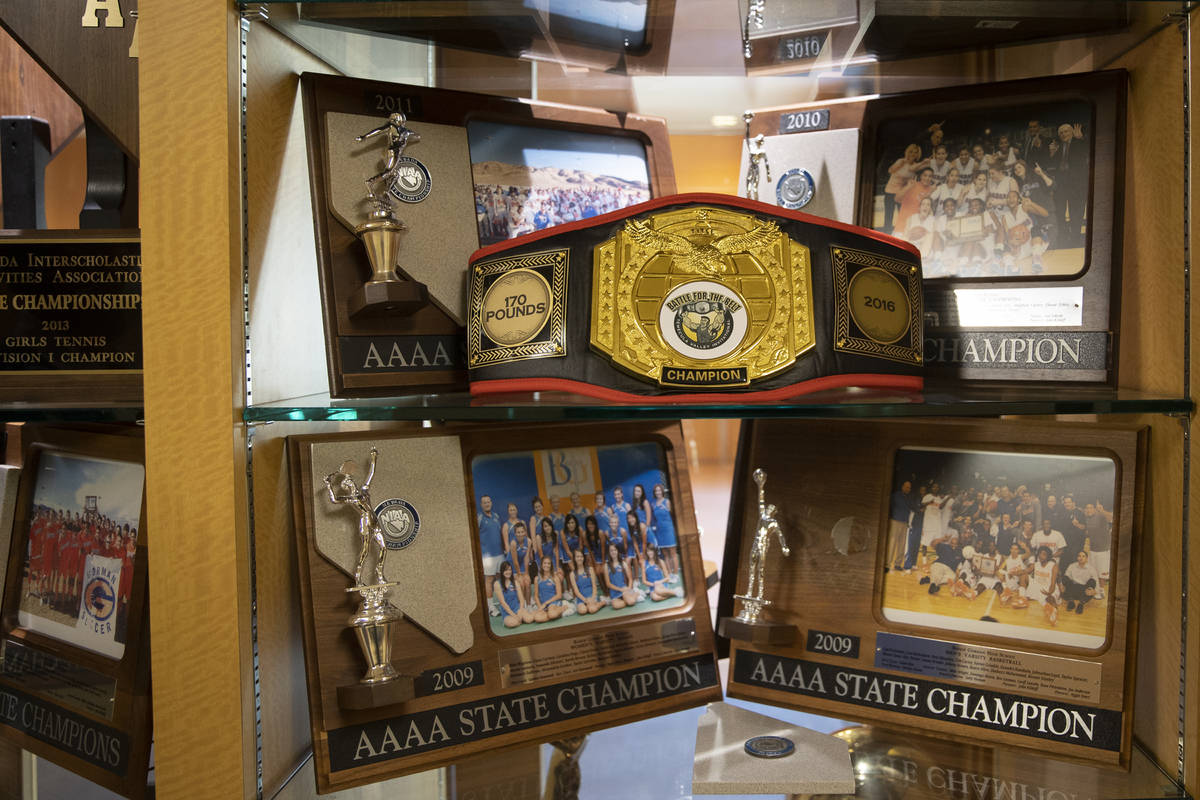 I’m thinking this Zeno of Citium fellow coached a sport back in 300 B.C.

We can thank the Hellenistic philosopher for this popular adage: Control what you can control.

The local high schools that annually compete against Bishop Gorman would be wise to remember it. It sure would relieve unnecessary stress on folks.

Over the past three days in these pages, esteemed colleague Ron Kantowski has done a masterful job taking a deep dive into how the Gaels became one of the country’s premier high school athletic programs.

Ironic. The pool is one place where Gorman hasn’t dominated over time. There are others. Honest.

They lost a most important element: The belief it’s possible to sling a pebble and conquer the mighty giant.

The Gaels have every imaginable advantage over their Nevada-based competition. Money. Facilities. Resources most schools don’t dare dream about given the absurdity of it all.

The sun won’t rise Wednesday to a Gorman void of such superiority on the field and in the vault. The school even has a wealth of high-powered connections at its disposal, including those who advise and represent athletes or coaches should they become entangled in legal matters.

Which means opposing teams need to channel their emotions toward the chance of beating Gorman rather than fretting about such inequities. It’s the healthier way.

It’s not easy. Feelings of bitterness and anger certainly are understandable. Nobody wants to compete on a level they perceive ridiculously one-sided.

It’s true. When it comes to an even playing field, one doesn’t exist for most schools when facing Gorman in certain sports. Hasn’t for some time. Might never again.

What, then, should the message be to those young athletes on the opposite side?

I always point to Liberty football coach Rich Muraco. In building a program that eventually knocked Gorman from its perch as 10-time state champions, Muraco for years emphasized those strengths his program had instead of constantly stewing over Gorman’s numerous advantages.

Muraco controlled what he could control — preaching the same to his players — and worked tirelessly to finally take aim with that pebble. Paid off with a historic result. The giant fell hard in a semifinal loss.

Now, there is a pecking order to all of this. Liberty’s success in football has enabled it to be a popular landing spot for several talented transfers. Gorman isn’t the only school with advantages over the masses. Liberty football is right there on several accounts.

But it’s not all state championship glory for the Gaels. They haven’t won a title in girls basketball since 2010 and only four overall. They just captured one in softball for the first time in school history.

They have just one (1989) in boys swimming, while the girls last won it all in 2014. It has been six years since the baseball program stood as Nevada’s best, and fellow boys sports in soccer and tennis and golf are more than pedestrian lately when it comes to state.

Opposing schools need to make a choice: Either continue to be consumed by all things Gorman or accept the challenge of doing all that is needed to find success against it.

But we know which option Zeno of Citium would pick.

He wouldn’t give a hoot about Gorman. Just his own team.