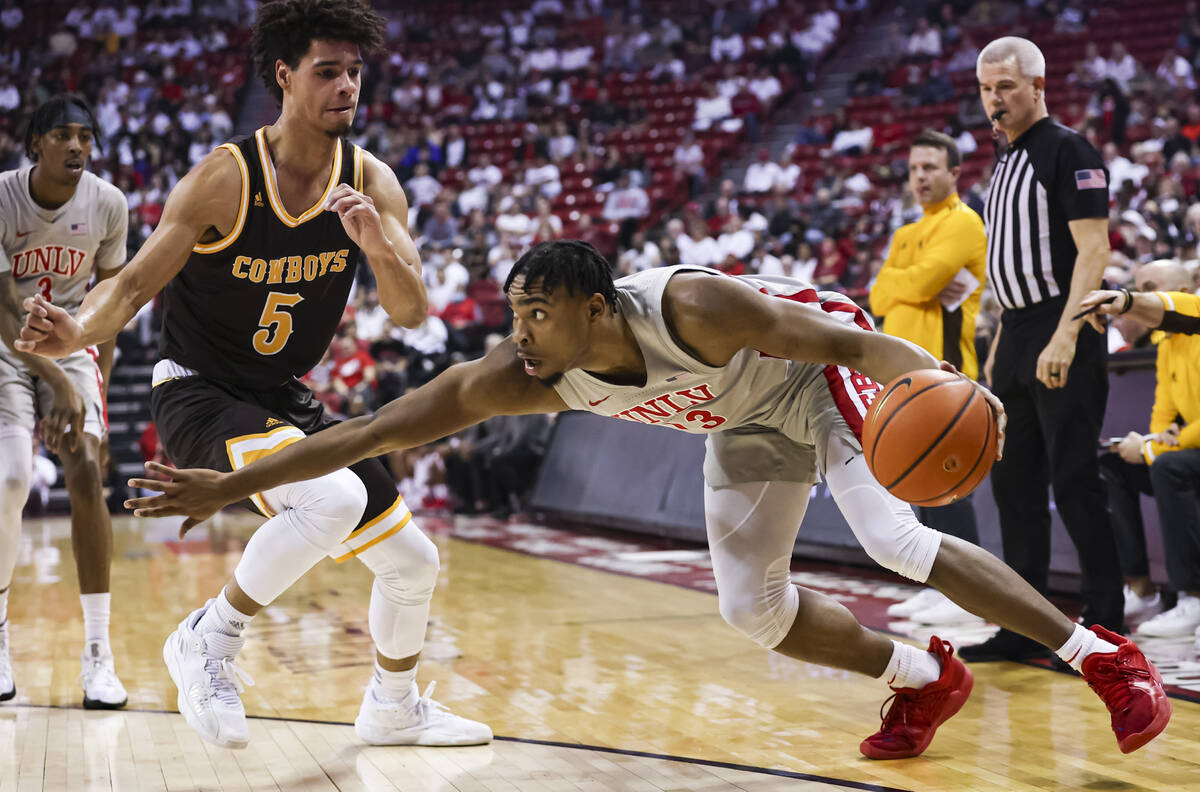 UNLV Rebels guard Bryce Hamilton (13) drives the ball under pressure from Wyoming Cowboys guard Brendan Wenzel (5) during the first half of a basketball game at the Thomas & Mack Center on Wednesday, March 2, 2022, in Las Vegas. (Chase Stevens/Las Vegas Review-Journal) @csstevensphoto 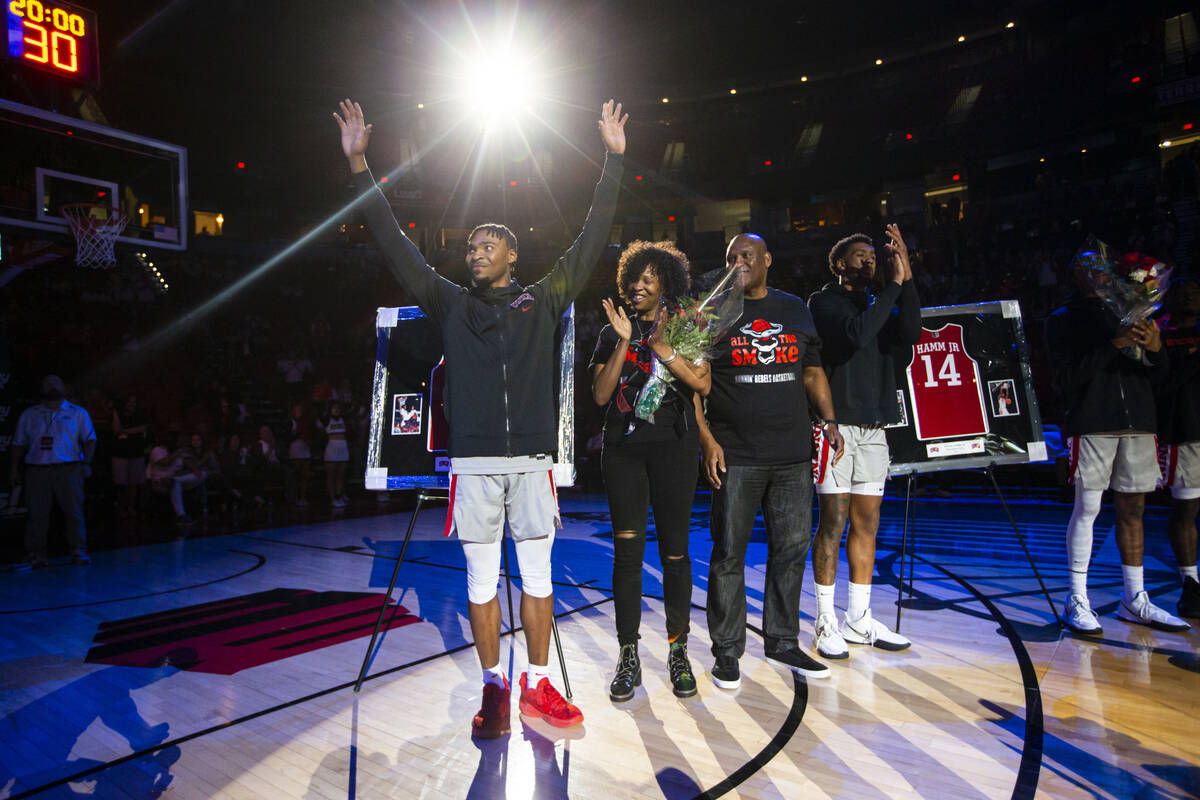 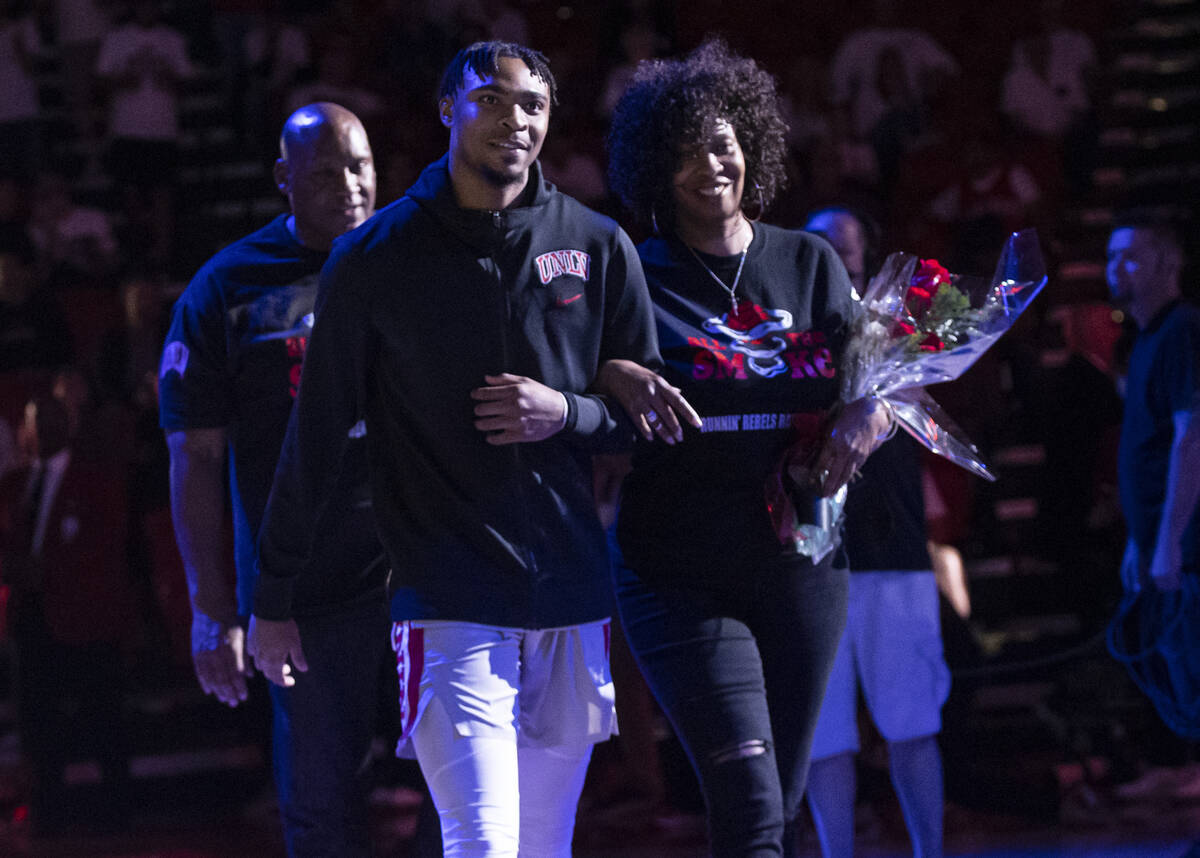 The cheers began midway through his introduction. The standing ovation followed.

It was Senior Night for UNLV’s basketball team Wednesday, and Bryce Hamilton was the final player to walk onto the Thomas & Mack Center court. How fitting. Saved the best for last.

It was — a 64-57 win over Wyoming — in all likelihood the final regular-season home game for Hamilton. He isn’t expected to apply for the COVID-19 waiver and extra season of eligibility afforded all college athletes in the midst of a pandemic.

One of the finest players in program history is all but gone.

He was recruited to UNLV by former coach Marvin Menzies and then-assistant Eric Brown.

Something few know: Menzies had to be sold on taking Hamilton. He wasn’t overly impressed when first watching the player. But the persistence of Brown paid off.

“The next few times I watched (Hamilton), he checked all the boxes — really good character kid from a great family,” Menzies said. “It was a no-brainer once we sat with him and spent some time with him during the process.

“(Scoring) was what we recruited him for. We knew he could put the ball in the basket in a variety of ways. We also thought he would improve over time, which he has.”

To the tune of this: Hamilton ranks 10th all time in scoring with 1,723 points at UNLV, having totaled 15 against a constant Wyoming double team.

He twice tested the NBA draft process without hiring an agent, returning first for his junior season under coach T.J. Otzelberger and again now under first-year coach Kevin Kruger.

Feeling is, there will be no returning this time.

It won’t be a smooth path to the NBA for a 6-foot-2-inch shooting guard whose defense and passing have always needed improvement. But his skill set as a scorer could interest teams.

Hamilton’s best opportunity at making the world’s best league would come from deep, where he could prove himself a reliable 3-point shooter. Hard work doesn’t bother him. He has gone from a 31.3 percent shooter on threes last season to better than 36 percent this season.

Believe it: He’ll make money playing basketball somewhere and will be well-schooled on the process. His brother played professionally overseas, and Hamilton has three cousins who made the NBA.

“A lot of the same reasons UNLV has meant so much to me is the same for Bryce,” said Kruger, who as a point guard led the Rebels to the Sweet 16 of the NCAA Tournament in 2007. “He has put in years here — every day, every summer, trying to help UNLV. At the end of the day, that led him to coming back more than anything.”

Kruger’s scouting report on Hamilton: Quiet but confident. Never steps out of bounds when talking to others. Respectful. Someone you root for. Keeps his head down and never shows up opponents. All the same qualities from which a community has embraced UNLV’s team the past month or so.

It’s what Bryce Hamilton — who will graduate in May with a degree in sociology — did for UNLV and probably will do now.

Moving forward, but not without having first etched his place into the program’s vast history.