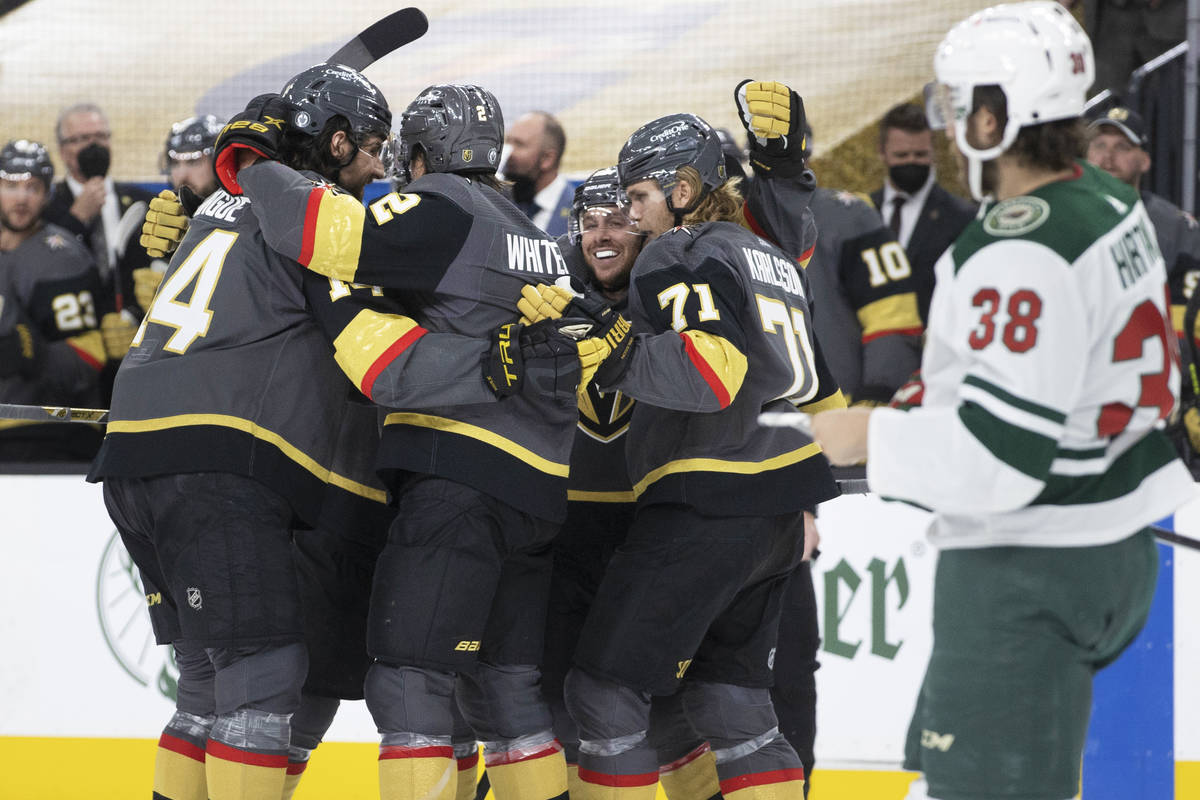 Vegas Golden Knights players celebrate after a second-period goal in game 7 of the an NHL Stanley Cup first-round playoff series against the Minnesota Wild on Friday, May 28, 2021, at T-Mobile Arena, in Las Vegas. (Benjamin Hager/Las Vegas Review-Journal) @benjaminhphoto

DENVER — An interesting and yet perhaps meaningless stat: When a team in a first-round matchup of the Stanley Cup playoffs goes seven games to win a series and then meets a higher seed that swept its opponent, the lower seed is 5-0 in that next round.

It’s a potential reality for the Golden Knights.

They’re just not expected to do so.

Welcome to unfamiliar territory, the Knights entering their best-of-seven showdown with the Colorado Avalanche as an underdog in a series that begins with Game 1 on Sunday night at Ball Arena.

The Westgate sportsbook opened the Avalanche at -175 on Friday night. The market grew a tad higher Saturday.

If forward Max Pacioretty had not returned from injury to play in a Game 7 clinching win for the Knights against Minnesota, the Avalanche could have opened -200.

“We’ve always taken support for the Knights in (the playoffs) throughout the years,” said Jeff Sherman, vice president of risk for the Westgate sportsbook. “We’re expecting that now, especially with them being an underdog. Colorado has been No. 1 in our power ratings. When they’re a healthy team, they’re No. 1 in the league.

“I’m expecting to see more Knights support because this is one of the rare times you’re going to get them as the underdog. We’re expecting the ’dog money to show up.”

The Knights have advanced to the playoffs in each of their four years and just once have not been favored to win a series. That came during the 2017 expansion season against Winnipeg in the Western Conference Final.

The Knights won in five games.

There was also the infamous first-round series against San Jose in 2019, which opened as a pick’em and ended in the folly of Game 7 and the Sharks scoring four goals in five minutes after a major penalty was assessed to the Knights.

San Jose advanced, and the Knights clinched a permanent role on the NHL’s all-time bloopers reel.

But nothing about how this latest series is being forecast should surprise. Rare is the current power ranking that doesn’t have Colorado — which swept St. Louis in the first round — sitting atop the league.

On some, the margin between the Avalanche and a next-best option is that of Simone Biles on the vault compared to a recreational gymnast.

Colorado and the Knights split eight regular-season meetings, and each finished with 82 points. But the Avalanche got to hang the Presidents’ Trophy banner because they had more wins in regulation. I want them to include a picture of a minivan to commemorate being czars of the Honda Division. Just pull a Nashville and go all-in on the banner weirdness.

But you can be sure Colorado and the Knights are thinking about displaying a more prominent sign of success when the postseason ends.

“I expect it will be a really good series,” Knights general manager Kelly McCrimmon said. “They have home ice. They won the Presidents’ Trophy, so I guess by definition, that puts us in an underdog role. But it is what it is.

“We are anxious to get started, and I suspect once the puck drops, there won’t be a lot of talk the rest of the way about who the underdog is or who the favorite is. It will be settled on the ice where you’d expect it to be.”

Besides, being the favorite isn’t always a good omen.

The Knights were -170 to win the Stanley Cup against Washington four years ago.

Five games later, Alex Ovechkin was stumbling out of T-Mobile Arena clutching the Cup on his way to a historic summer bender. Ah, memories.