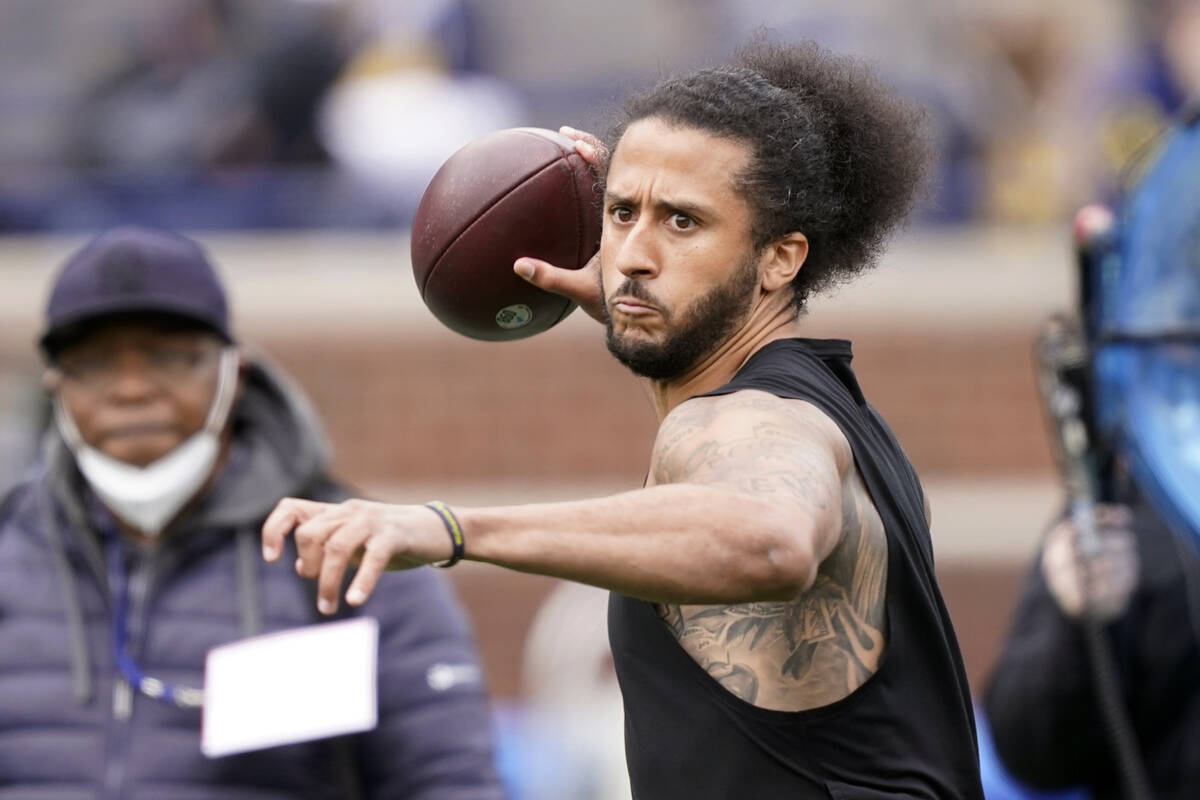 On the same day a Las Vegas judge ruled in favor of former Raiders coach Jon Gruden and one phase of his lawsuit against the NFL, the team worked out quarterback Colin Kaepernick.

There could be more to unpack here beyond football.

You want Kaepernick’s first tryout with an NFL team since 2017 to be solely about whether he can help the Raiders on the field; for this all to be genuine.

You want a player who some NFL owners basically schemed against once he began openly protesting racial injustice to have another shot, however long it might be.

Kaepernick is 34 and hasn’t played since last taking a snap for the 49ers in the 2016 season. That’s more than a minute, but it’s unlikely there are 32 backups better than him. Even after all this time.

There are some really dead-flat average quarterbacks holding clipboards on Sundays.

Perhaps new general manager Dave Ziegler and coach Josh McDaniels simply believe he still has a level of skill that might benefit their vision for the Raiders. Don’t know them well enough not to give a benefit of the doubt.

That’s all one possibility.

Here’s another: This makes little sense football-wise given Kaepernick’s age and years of not being under center.

The Raiders traded for a backup quarterback (25-year-old Jarrett Stidham via New England) with an intimate knowledge of McDaniels’ playbook.

Whether it’s about Gruden’s resigning after emails surfaced containing homophobic and misogynistic remarks or a recent New York Times article that painted an alleged picture of dysfunction within the organization, the Raiders might feel a need to shine their silver and black light in another direction.

But maybe, just maybe, it’s this: Given how fond Raiders owner Mark Davis is of Kaepernick, the team might envision him as one who could lift the culture of a locker room.

That a franchise which hired the NFL’s first Black coach and its first female chief executive of the modern era thinks a player with Kaepernick’s social conscience could prove a positive force. A movement instead of a move.

“I believe in Colin Kaepernick, and he deserves every chance in the world to become a quarterback in the National Football League,” Davis told NBC Sports Bay Area. “I still stand by it. If our coaches and general manager want to bring him in or want him to be the quarterback on this team, I would welcome him with open arms. I think Colin is a very misunderstood human being.

“(Kaepernick) sacrificed a lot of the things that he could’ve been doing in his life to get a message across about police violence and equity and inclusion in America, and I stand by that.”

The football part of a Ziegler-McDaniels duo has been pretty much drama-free to this point. Making the decision to sign Kaepernick would change that along the lines of a noticeable media frenzy.

I get the feeling they wouldn’t — and shouldn’t — care about such.

Most teammates would support Kaepernick, as past and present NFL players — much like Davis — have done so publicly. Some have taken an opposite approach, but consider the source when Antonio Brown leads such a minute contingent.

This, of course, could all be much ado about nothing. It was one workout. Maybe the Raiders sign Kaepernick. Maybe they pass. He would still have to make the team.

But nothing is ever that simple when it comes to Colin Kaepernick. Only the Raiders know why they chose to work him out.

Could be they think he can still play.

The nefarious stuff isn’t as uplifting a narrative.