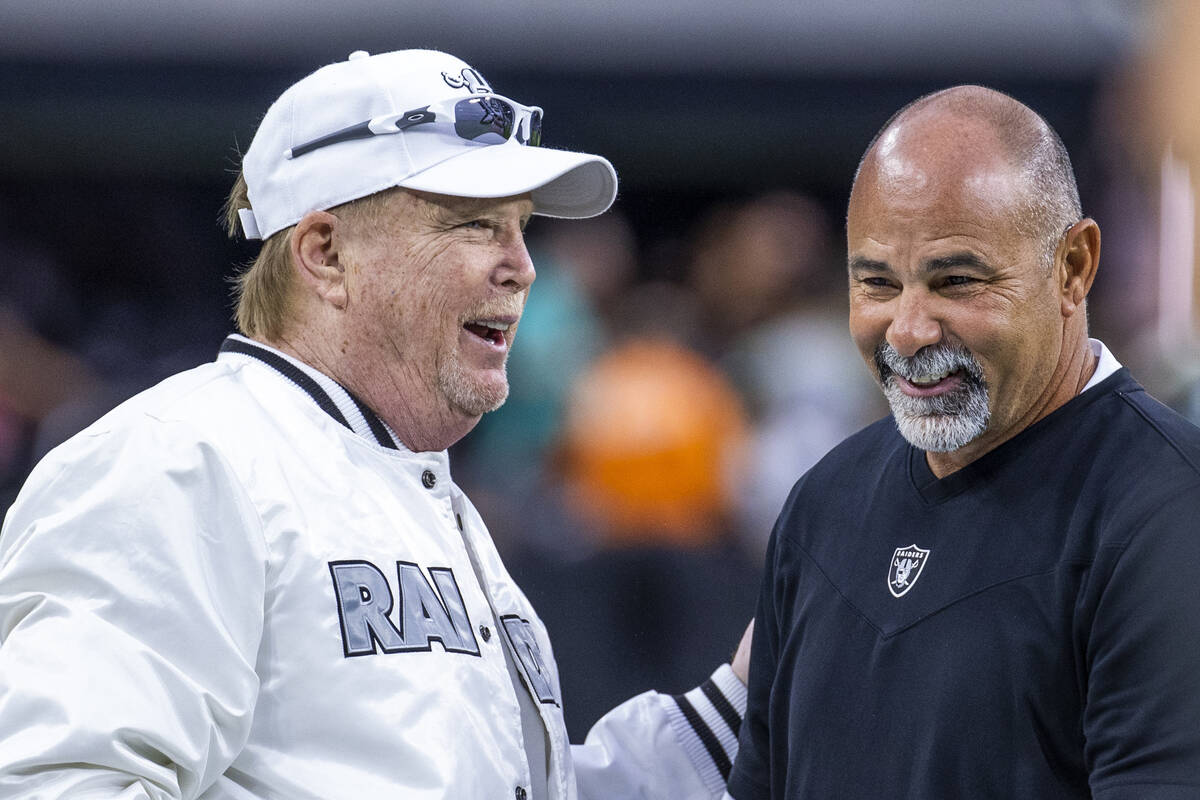 Raiders owner Mark Davis chats with interim head coach Rich Bisaccia on the field before the first half of an NFL game at Allegiant Stadium on Sunday, Oct. 24, 2021, in Las Vegas. (L.E. Baskow/Las Vegas Review-Journal) @Left_Eye_Images 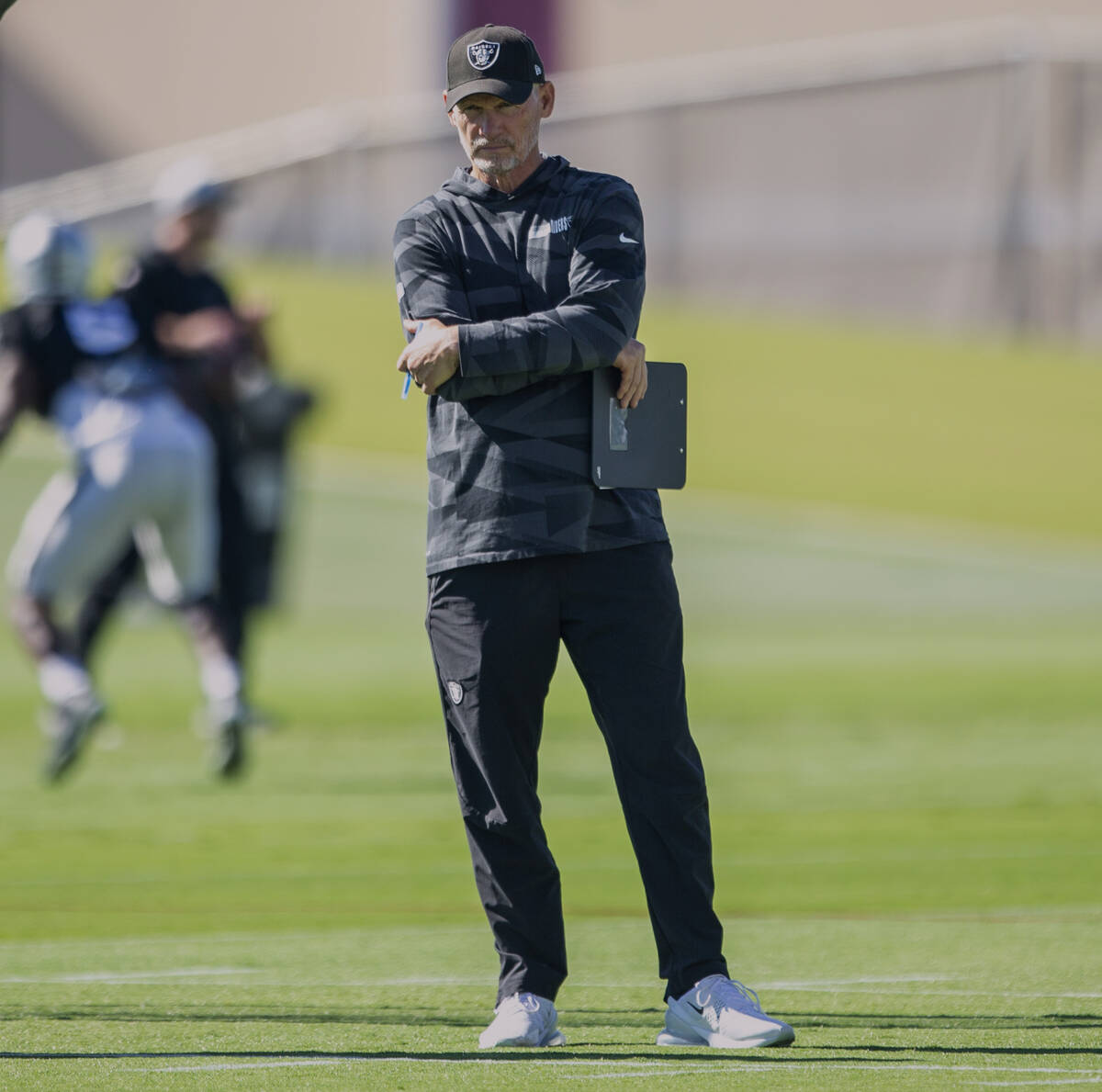 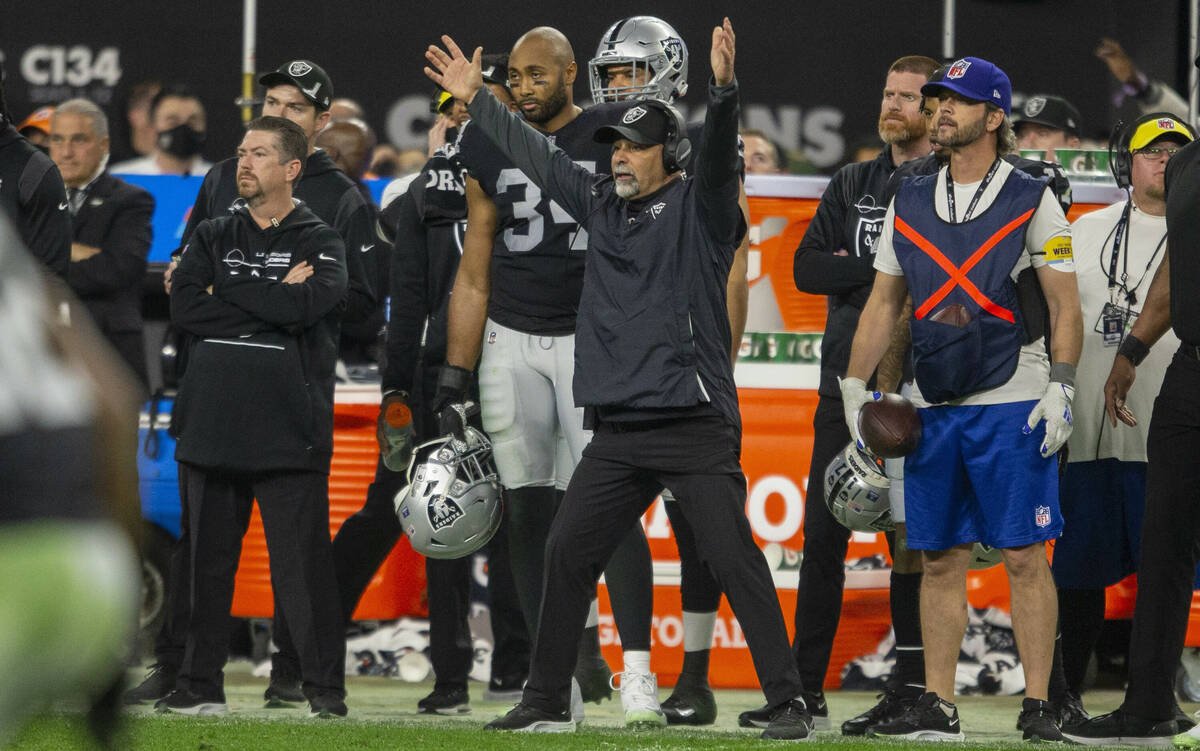 These are usually moves made when the deck is about to be cleared.

Mike Mayock is out as general manager of the Raiders. Interim coach Rich Bisaccia on Monday made it sound like his future still hasn’t been decided.

Doesn’t seem likely. Squint your eyes. You can see the dominoes falling.

It all paints a picture of owner Mark Davis starting over on the management side of the ledger, his team having been eliminated from the AFC playoffs in a wild-card loss at Cincinnati on Saturday.

If so, who can blame Davis after a season of such drama and disorder off the field?

There is much to be said for a fresh start, especially when you consider all that transpired with the Raiders in 2021. Good news for the team: It’s not as if whoever replaces Mayock and probably Bisaccia will be inheriting the Jacksonville Jaguars.

The Raiders have a playoff roster but not one of a Super Bowl variety. But they’re closer to advancing in the postseason than not. There isn’t a need for a total overhaul.

For this, current continuity is for the birds if Davis can now make the correct choices on who to hire. Correct choices usually win lots of games.

Bisaccia’s story has often been told.

This is what usually happens with an interim coach: The position is handed to an assistant at the time of, say, Jon Gruden resigning over an email scandal. It’s usually someone players like and respect and will play hard for as turmoil swirls around them.

Someone who is able to steady the ship amid those choppy waters and bring some semblance of calm to the entire saga.

Then a team goes on a four-game win streak to end the regular season and lives for the playoffs for just the second time since 2002. And one by one, those in locker room publicly support having the interim tag removed and Bisaccia being given the full-time gig.

“Certainly, what a great gesture,” Bisaccia said of those like quarterback Derek Carr and Pro Bowl defensive end Maxx Crosby singing his praises following the loss Saturday. “I’m not going to stand here and say, ‘No, I don’t think that’s great, and I don’t appreciate that.’ It was never asked for. Actually, there were meetings that we had where I almost explicitly told them, ‘Don’t do that or you don’t have to do that.’”

Maybe Bisaccia gets a serious look. Maybe just a courtesy interview. But it shouldn’t be because he’s a good guy. This isn’t a popularity contest. These are decisions that will affect the organization for years to come.

Mayock was an interesting case. He — like everyone else with the Raiders —answered to Gruden. Mayock never really had final say on much of anything.

Those underachieving and failed picks such as Clelin Ferrell, Henry Ruggs, Damon Arnette, Johnathan Abram and Alex Leatherwood were likely too much to overcome. There was some success with mid-round selections and free agency. None of it mattered in the end.

Much still to be sorted out. Often, these sorts of things begin from the top and work themselves down. General manager. Head coach. Coordinators. Assistants. Players.

Stay tuned. The first domino has fallen with the firing of Mayock. It assuredly won’t be the last.