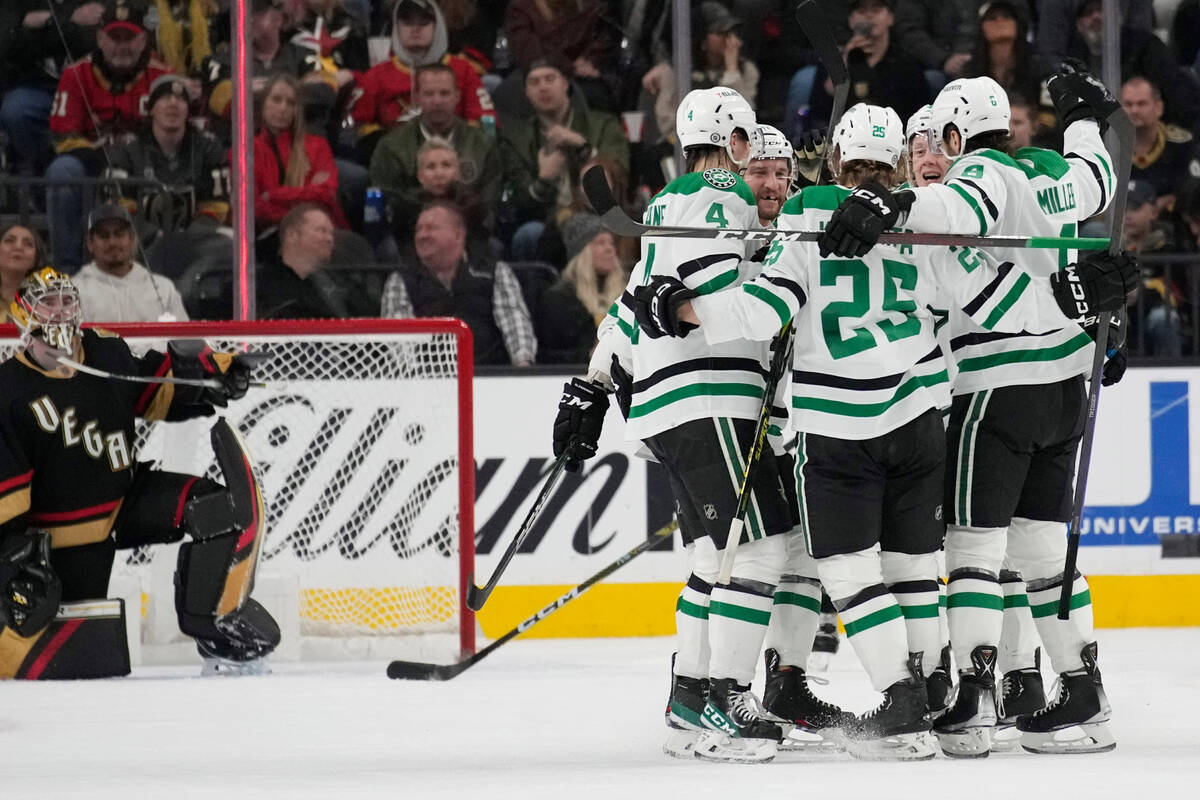 The welcome back video lasted 30 seconds. Fans stood and cheered. Pete DeBoer waved to the gathering.

He was back in T-Mobile Arena.

DeBoer had assumed his place behind the visiting bench, now coach of the Dallas Stars after being fired by the Golden Knights in May.

His new team would roll over the Knights 4-0 before an announced Monday afternoon gathering of 17,895.

DeBoer spoke to assembled media beforehand, answering questions about everything from the emotions of such a return to happiness found in Dallas.

He thanked Golden Knights owner Bill Foley for the opportunity.

Didn’t speak of other members of management. Not a shock.

DeBoer, for good reason, disagreed with his dismissal. He had in 2½ years led the Knights to two NHL semifinals and (you know the story) had a team last season that missed the playoffs with 500 man games lost to injury.

Or at least that was the number thrown around. Hey, it was a lot.

“I loved my time here,” DeBoer said. “Kept my house here. Probably would consider retiring here we liked it so much. Just loved everything about it. It’s nice to be back. I thought we played a lot of really good hockey in the short time I was here. Got a lot of respect for players and some of the staff over there.

“I’ve enjoyed the culture (in Dallas) and the fit in the organization. … They’ve got a great culture, a great room. It’s an enjoyable place to come to work every day. I feel like I seamlessly fit into that.”

As for Monday’s game, it wasn’t close in most any manner. Dallas was by far the more disciplined team that outshot the Knights 35-27. The Stars were the more committed side. They were just better everywhere.

Stars players knew the importance of the game for DeBoer and assistant Steve Spott, who was also fired and followed the coach to Dallas, and played like it.

The depleted Knights played like it was time for their regular afternoon naps.

They just didn’t compete to the level of having a chance against an opponent tied atop the Central Division.

No energy from the home team. Not much of anything, really.

“I don’t know if it’s just the mental part of ‘here we go again’ with the injuries because I wasn’t here last year,” Knights coach Bruce Cassidy said. “But I do know there was a lot of injuries. I mean, you have to be mentally tougher if that’s the case. You have to pull through. You don’t want a repeat of last year.”

Still, you have to believe that if these teams would be healthy come playoff time, the matchup could have far bigger implications.

Could this be, for instance, a preview to the Western Conference Final?

“You know what?” DeBoer said. “If I hadn’t gone through what I did last year, where I coached in the All-Star Game (in Las Vegas) two weeks from now and then was out of a job four months later, I probably might (think of it that way). (But) I’m not counting on anything. I’m not taking anything for granted right now.”

The welcome back video lasted 30 seconds. Fans stood and cheered.

“Honestly, it was touching,” DeBoer said. “You never know when you leave, but I thought it was really classy to include (Spott) and I both at the same time. I thought the reception from the fans was great. I never expected it to be different. … This is a passionate, passionate group of people.”

The Stars have a tradition that, after a big win, someone chugs a beer in the locker room.

No surprise here — DeBoer had the honors Monday.

Editor’s note: It was a Bud Light.

“I went cold turkey and nailed it,” he said.

He was grinning from ear to ear.