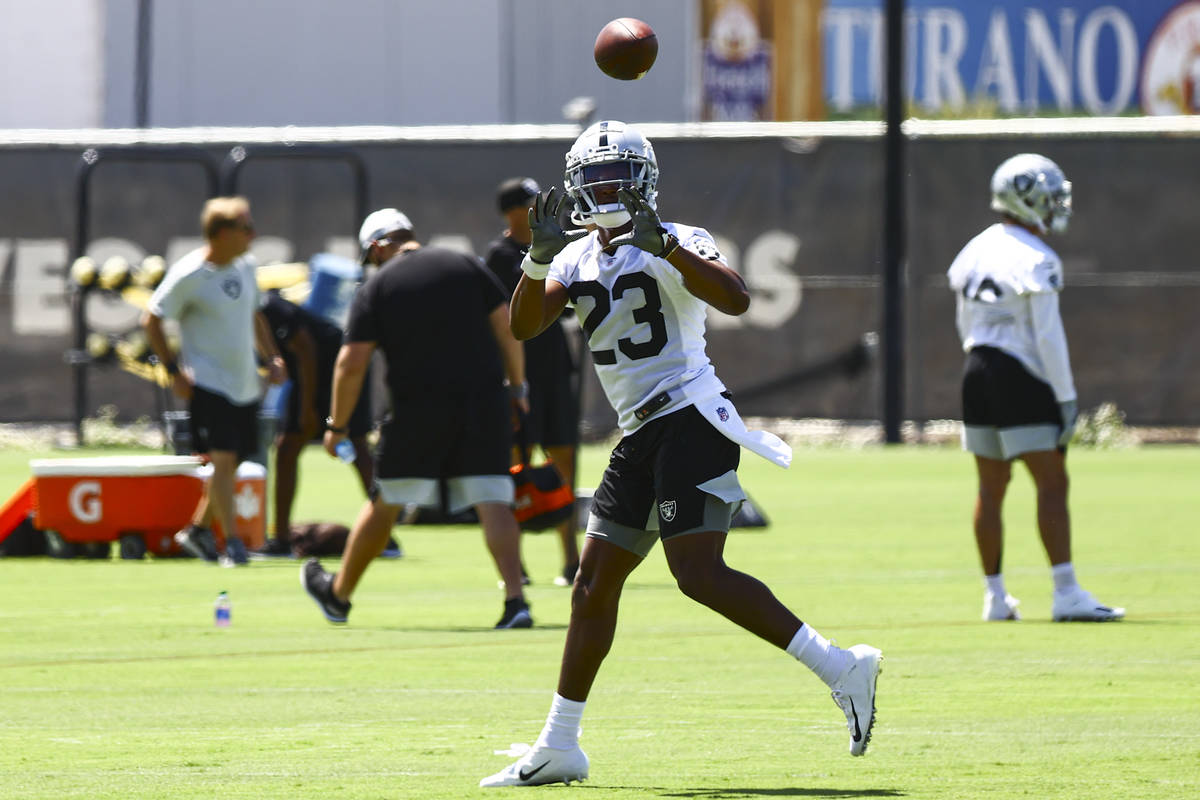 When it comes to the Raiders and defense, the leading narrative isn’t one of a glass half-empty.

It lacks even a hint of moisture. Dead stinking dry.

Not so with the offense, which has had a gulp or two of positive results in recent times.

Players report to training camp Tuesday. You can bet once drills commence under a blazing sun, all eyes will squint toward those employed to stop the ball. The ones hot under a horse collar.

Not the other guys.

The offense has held its own when compared across the league, ranking eighth in yards and 10th in scoring last season.

But there are enough unanswered questions on offense to make the next month or so more than compelling, and that’s not just to discover the identity of Andre James, a heretofore anonymous offensive lineman.

Or the role for Kenyan Drake, who is expected to last longer in space than Jeff Bezos.

It has become a standard evaluation that quarterback Derek Carr — about to enter his eighth season as the starter — ranks anywhere between the 10th and 15th best player at his position in the NFL. You can win with that grade. You can make the playoffs.

If you get there, which is, of course, the proverbial elephant in the room.

The offense in most respects should be good enough as is, but not when your defense tends to make Sunday afternoons a whoever-scores-last-wins carnival game.

Consider: The nine teams ranked ahead of the Raiders in scoring last season made the playoffs. You would think averaging 27.1 points gives you a fighting chance, but not when you’re allowing 30.

“The more pieces that you have on offense, the more problems it creates for (opposing) coordinators and the less they can do,” Carr said. “People are going to have to decide what they want to defend, and hopefully we can continue to get into good plays and counteract that a little bit.”

He still throws to one of the league’s best tight ends in Darren Waller. Still has a highly productive running back in Josh Jacobs. Still has completed nearly 69 percent of his passes over the last three years.

But whatever jump the offense might make this season — Top 10 could be even better — will depend largely on how a rebuilt line responds and which wide receivers can make it so Waller isn’t always the option Carr trusts.

Drake was signed to a hefty two-year contract worth $11 million to pretty much do everything — run, pass, throw? — playing a joker position that seemingly enchants head coach Jon Gruden.

Drake has said the offense was going to space and seemed to be talking about something a little more extreme than playing in “The Death Star” of Allegiant Stadium.

Listen, if the defense improves much at all, things should be just fine for the Raiders at 10,000 feet. It should be safe to operate approved electronic devices.

Training camp and three preseason games are vital for many. James as the new starting center. Alex Leatherwood as a rookie right tackle. Henry Ruggs and Bryan Edwards as second-year receivers looking to contribute (much) more. John Brown and Willie Snead as veteran receivers hoping to compete for starting roles.

To ascertain whether a red zone attack — the Raiders ranked 23rd in scoring percentage for touchdowns within the 20-yard line last season — has improved.

“I can definitely see us being a (playoff team),” said Brown, whose seven-year NFL resume includes eight postseason games. “It starts off with respecting each other and we do that real well. And with the communication on the field. We do a great job with that. These guys, they want it real bad. So I feel like we’re in a great spot.”

Which will that much better if the defense finally holds up its end.