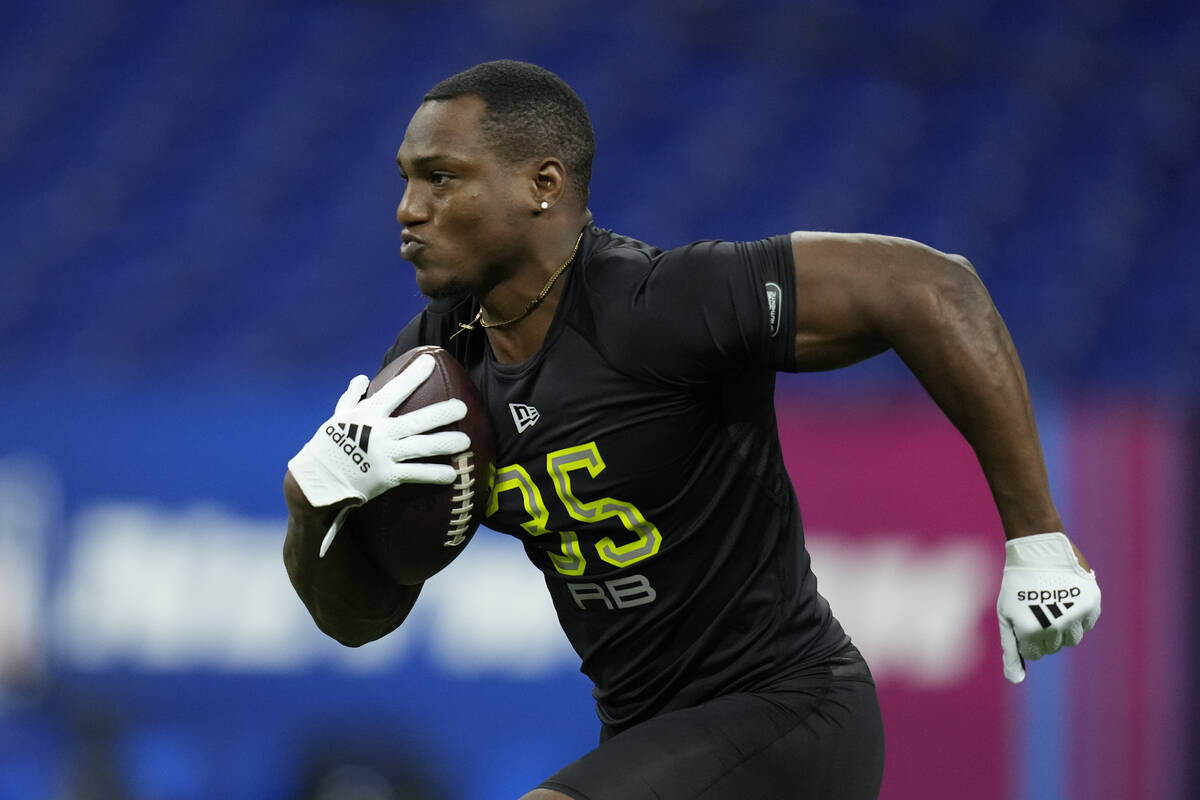 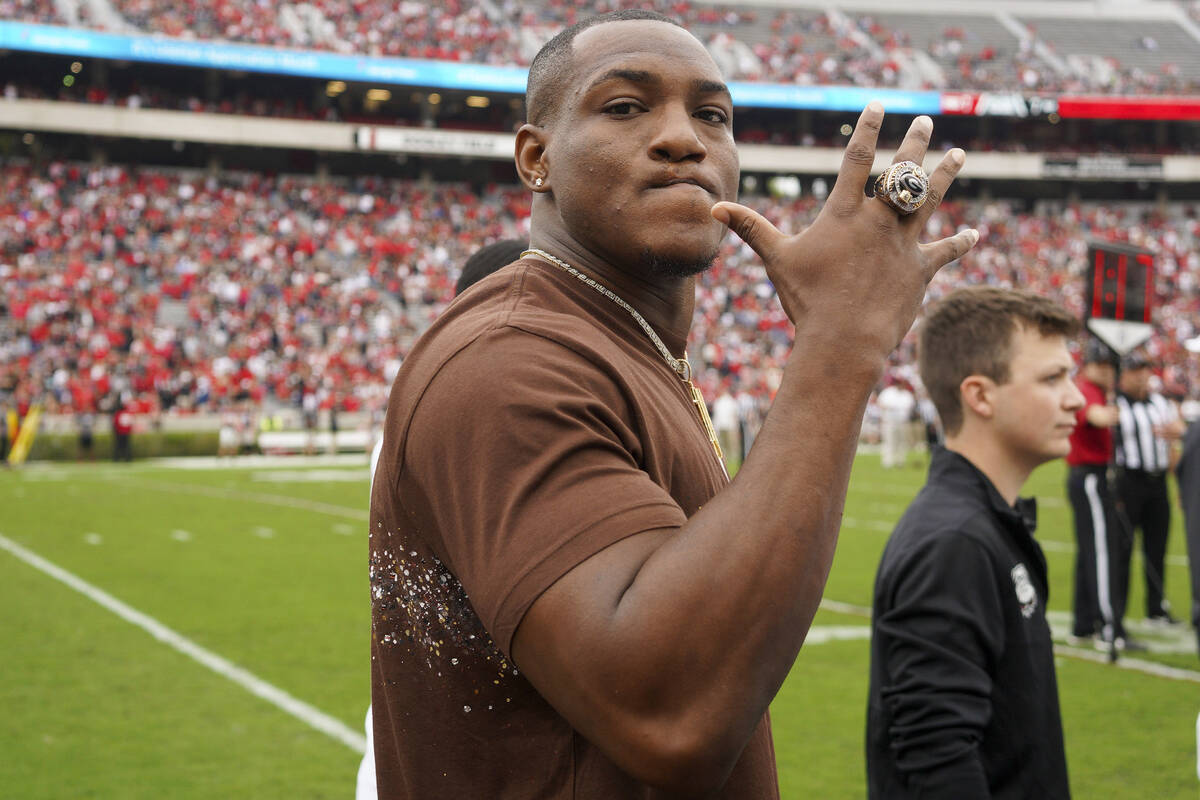 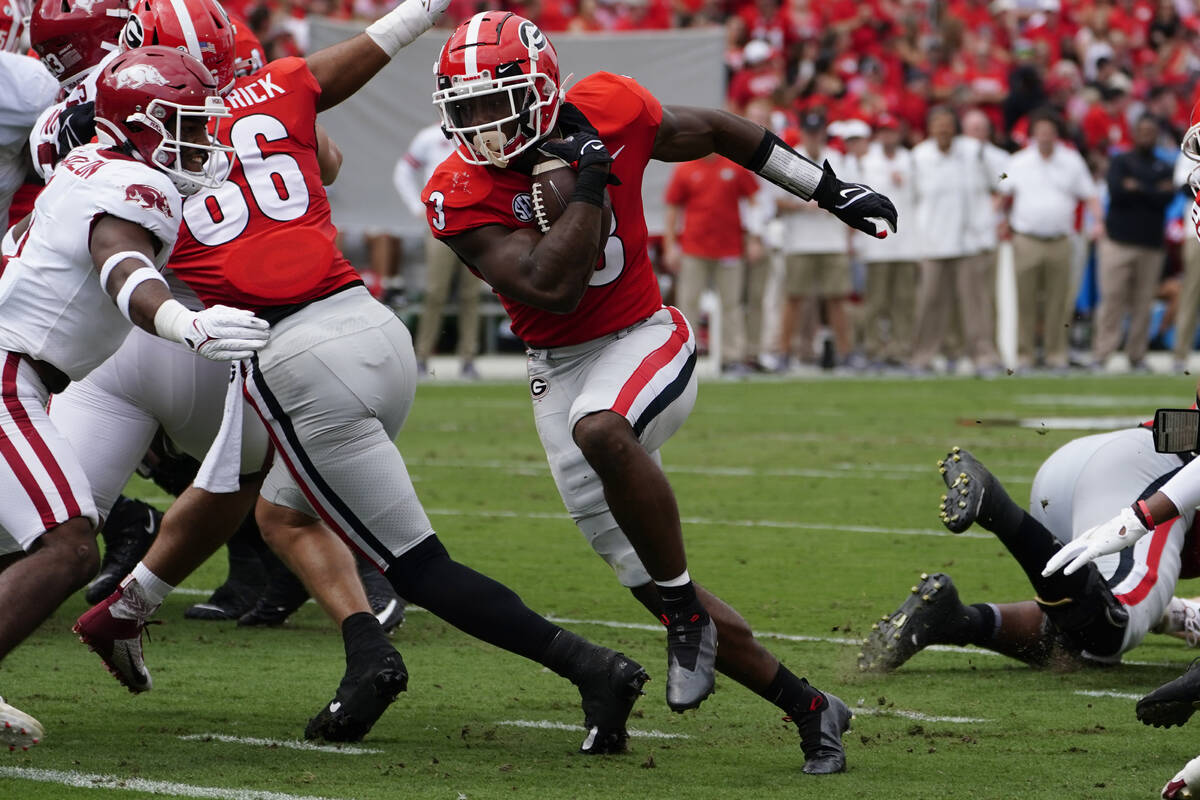 Georgia running back Zamir White (3) scores against Arkansas during the first half of an NCAA college football game Saturday, Oct. 2, 2021, in Athens, Ga. (AP Photo/John Bazemore)

Football is a tough game. The Raiders on Saturday drafted one of the toughest of players. Make that human beings.

Zamir White was a fourth-round pick at running back out of Georgia whose journey to the NFL was much harder and complicated than anything he will face on Sundays.

“I’ve waited my whole life for this moment,” White said. “It means the world to me.”

The background: When his mother was six months pregnant, White weighed just 1 pound. Doctors advised her to terminate the pregnancy. Her grandmother had a much different opinion. There would be no such conclusion.

If it meant Zamir would take just one breath, he was going to take it.

White’s path to Georgia was chronicled in an ESPN/SEC Network feature, one that described how he was given just 14 days when born with a cleft lip and cleft palate.

He would develop a leak in his kidneys and had another surgery for a hernia. There were other procedures throughout his youth. He spent the first three months of life in a hospital.

“He had difficulty with his speech (growing up) because he didn’t talk properly,” Louise Pegues, Zamir’s great aunt, said. “Even though the other kids had things to say about his mouth, I was like, ‘That’s OK, Zamir. They can’t do what you can.’”

Which was play football at an incredibly high level.

White would mature into the most special of talents, the nation’s No. 1-ranked running back out of Scotland High in Laurinburg, N.C.

Then, more hurdles to scale.

He would suffer a torn ACL in each knee — one as a senior in high school and another before his freshman season in Athens. It never stopped him.

He is powerful as all that, a straight-ahead locomotive at 6-foot, 215 pounds. White led the Bulldogs in rushing each of the past two years, and you might remember him trucking more than a few Alabama players in last season’s national championship game.

“The (knee injuries) were years ago,” White said. “I don’t even think about it anymore. Just keep on working, just keep on grinding, just staying focused on the process.”

Zeus is the god of the sky in ancient Greek mythology. He is represented by symbols such as the lightning bolt and the eagle. White’s nickname is Zeus.

I’m guessing the Raiders hopes he flies, all right.

They traded up to take him at No. 122 overall and he makes the running back room even more interesting. A collection of names on mostly one-year deals, the choice of White gives the Raiders some long-term ability at the spot.

Remember: It was on Friday when the team chose not to pick up a fifth-year option on running back Josh Jacobs.

“One thing that’s an attractive trait is you have people who have gone through different transitions and adversities in life and have come out the other end and succeeded,” said Raiders general manager Dave Ziegler. “Those are positive traits. There is a lot of adversity in this business, a lot of ups and downs.

“If you have experienced some of those things and dealt with them in an appropriate way — those are indicators you can handle the grind that comes with becoming a professional athlete.”

I don’t grade drafts. Far too unpredictable. Nobody knows how those picked are going to translate to the NFL. Not even, really, the teams doing the choosing.

Of course, there was the time I watched a prep basketball player live and thought, ‘This LeBron kid has a chance to be pretty good.”

Who knows yet what sort of NFL player Zamir White will be.

Just know this: There won’t be anyone tougher.

4
Derek Carr gets permission to talk to Saints