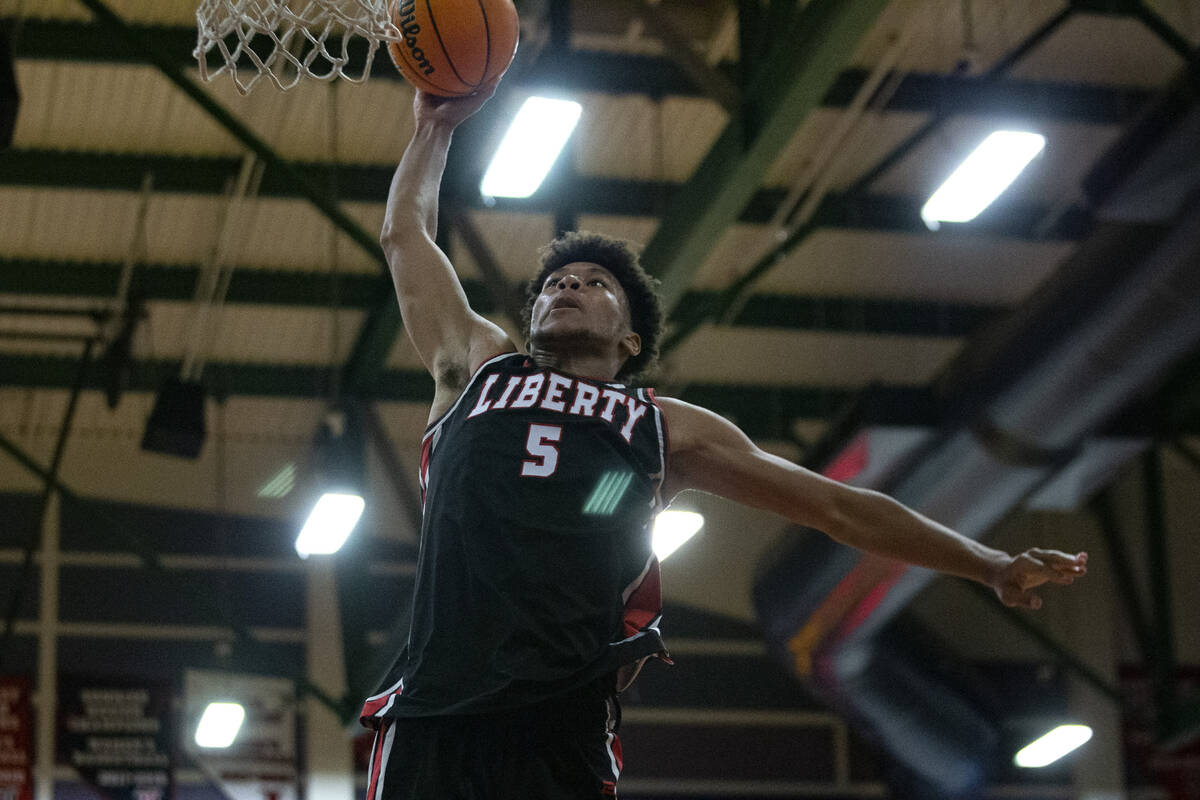 Liberty’s Joshua Jefferson (5) dunks against Bishop Gorman during the second half of a boys high school basketball game at Liberty High School on Thursday, Jan. 27, 2022, in Henderson. The game is a rematch of a double-overtime game from December 2021. (Ellen Schmidt/Las Vegas Review-Journal) @ellenschmidttt 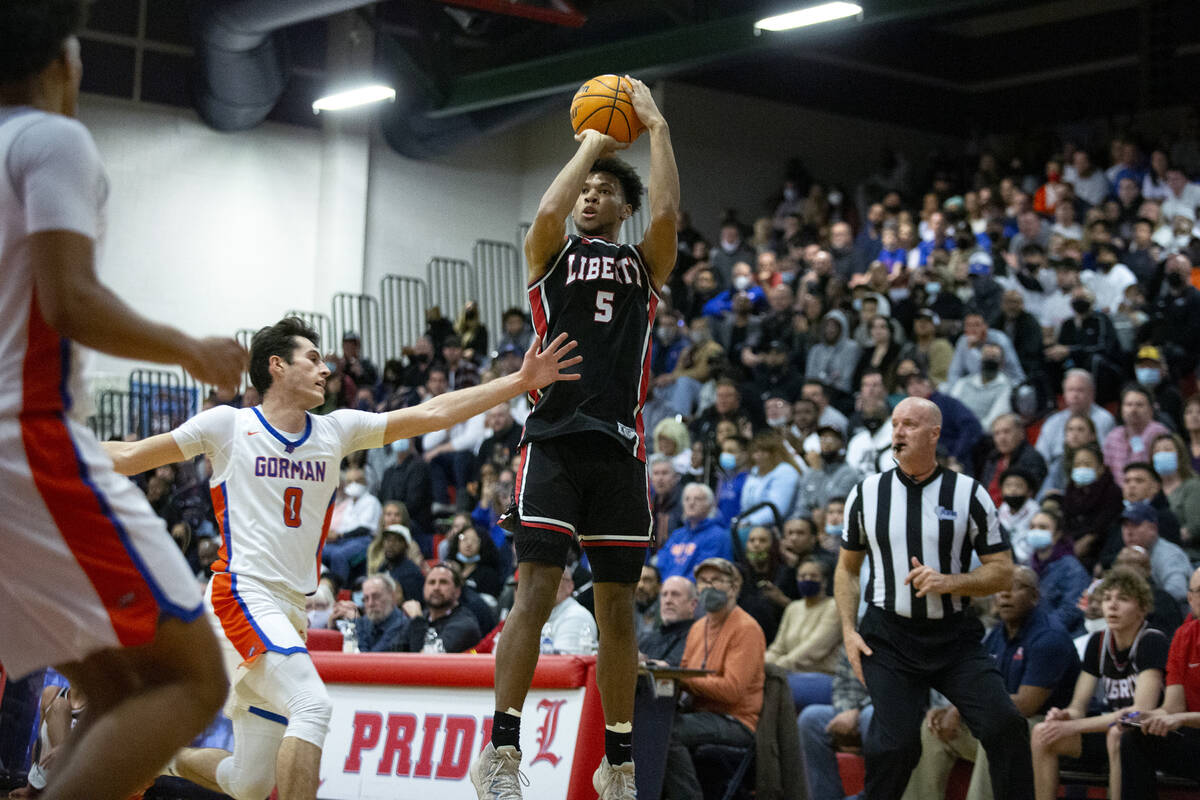 Liberty’s Joshua Jefferson (5) shoots against Bishop Gorman’s Ryan Abelman (0) during the second half of a boys high school basketball game at Liberty High School on Thursday, Jan. 27, 2022, in Henderson. The game is a rematch of a double-overtime game from December 2021. (Ellen Schmidt/Las Vegas Review-Journal) @ellenschmidttt 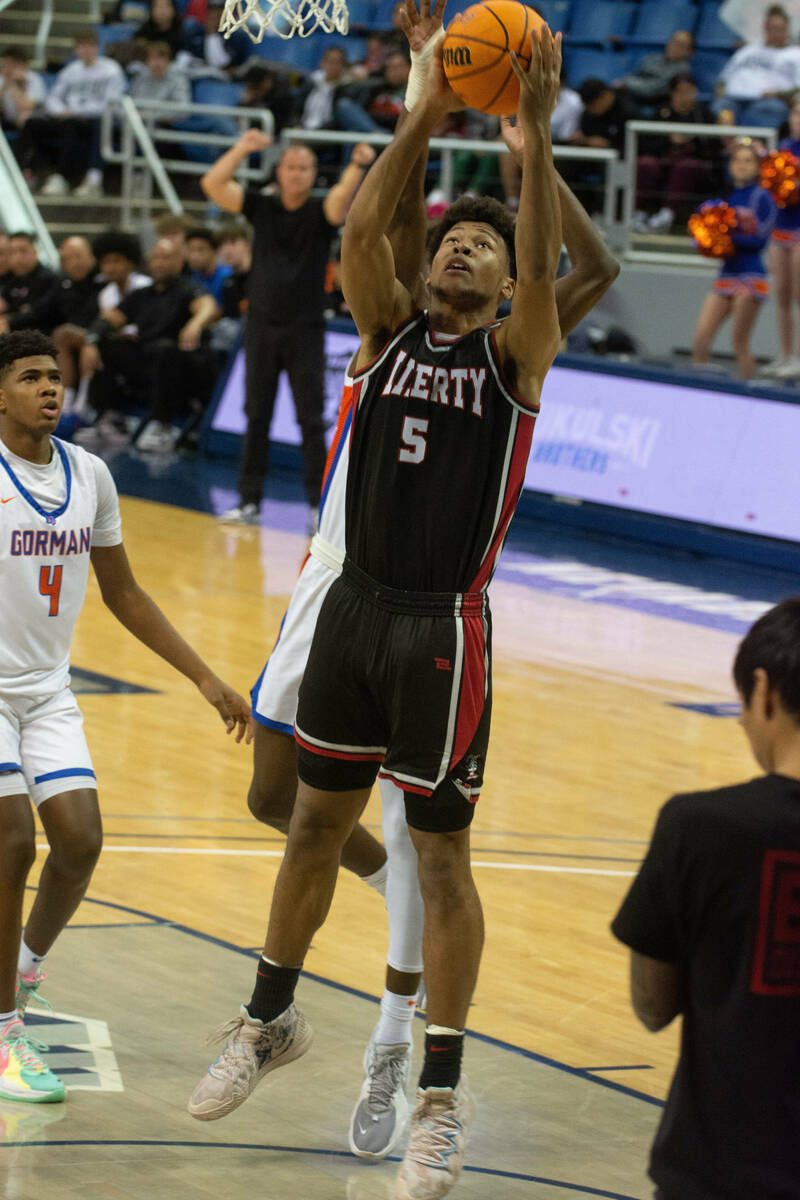 Moraga is a quaint suburb in the East Bay Area of California. It exists among wondrous mountain trails and has no direct freeway access. There are grazing cows and beautiful parks and all sorts of charming hideaways.

It’s where Joshua Jefferson discovered his ideal next stop.

“No distractions of the big city,” he said. “Just school and basketball.”

Jefferson is the Liberty High star who has signed with Saint Mary’s, a 6-foot-7-inch power forward whom the Gaels await with great anticipation. You can never have enough winners in a program.

Saint Mary’s keeps chasing Gonzaga in the West Coast Conference, keeps getting closer and closer, keeps adding pieces that one day might challenge the Zags for league supremacy. They’re not there yet. It still could be a (really long) minute.

The Gaels, the No. 5 seed in the East Region, open NCAA Tournament play Thursday against 12th-seeded Indiana.

It’s the sort of game Jefferson envisions playing in soon.

“A very high basketball IQ,” Saint Mary’s coach Randy Bennett said of Jefferson. “A great feel for the game. He’s what we need. Super passer. As we get him better, his shooting and scoring will only get better. Really excited about him.”

There is also this: Jefferson recently helped lead Liberty to the Class 5A boys state title by dethroning Bishop Gorman 63-62 in overtime. He scored 16 points and grabbed seven rebounds, and averaged 17.7 points, 10.0 rebounds and 4.0 assists for the season.

Later that night, in a frenzied University Credit Union Pavilion (capacity 3,500) in that quaint suburb of Moraga, Saint Mary’s dominated Gonzaga 67-57 in its regular-season finale.

Jefferson watched the first half from a hotel room and the second from a restaurant with his Liberty teammates. On the same day his high school dreams came true in Reno, his future ones played out on a TV screen.

There was a common remark among the Liberty faithful that evening — that how Saint Mary’s plays is a quintessential example of what makes Jefferson so right for the program. Which is another way of saying unselfish to a fault.

“I don’t like guys who don’t play the right way,” said Jefferson, who also helped lead his AAU team to major summer titles. “Winning basketball means playing together and being determined and overcoming adversity and fighting through things to get over the hump.

“Gonzaga is the best team in the country and will probably be one of the best next year. I can’t wait to get to (Saint Mary’s).”

Gonzaga beat Saint Mary’s 82-69 this month at Orleans Arena for its ninth league tournament title in 10 seasons. The Zags have been to the title game 25 straight years. They’re a machine. A behemoth.

They’re also the No. 1 overall NCAA seed for the second straight season and open West Region play against No. 16 Georgia State on Thursday.

You don’t need good players to beat the Zags. You need great ones. Those who develop over time into something special. Jefferson could be such a find.

“The best guys are those who win, who are on state championship teams,” Bennett said. “(Jefferson) is special that way. If you watch him, he’s not going to wow you all the time. But he really helps you win.”

Which, of course, is the point.

One of which, of course, Jefferson agrees.

Because should the Gaels again find themselves matched against Gonzaga for the WCC title next season, will Saint Mary’s prevail?

A winner’s attitude. Can’t have enough of them.