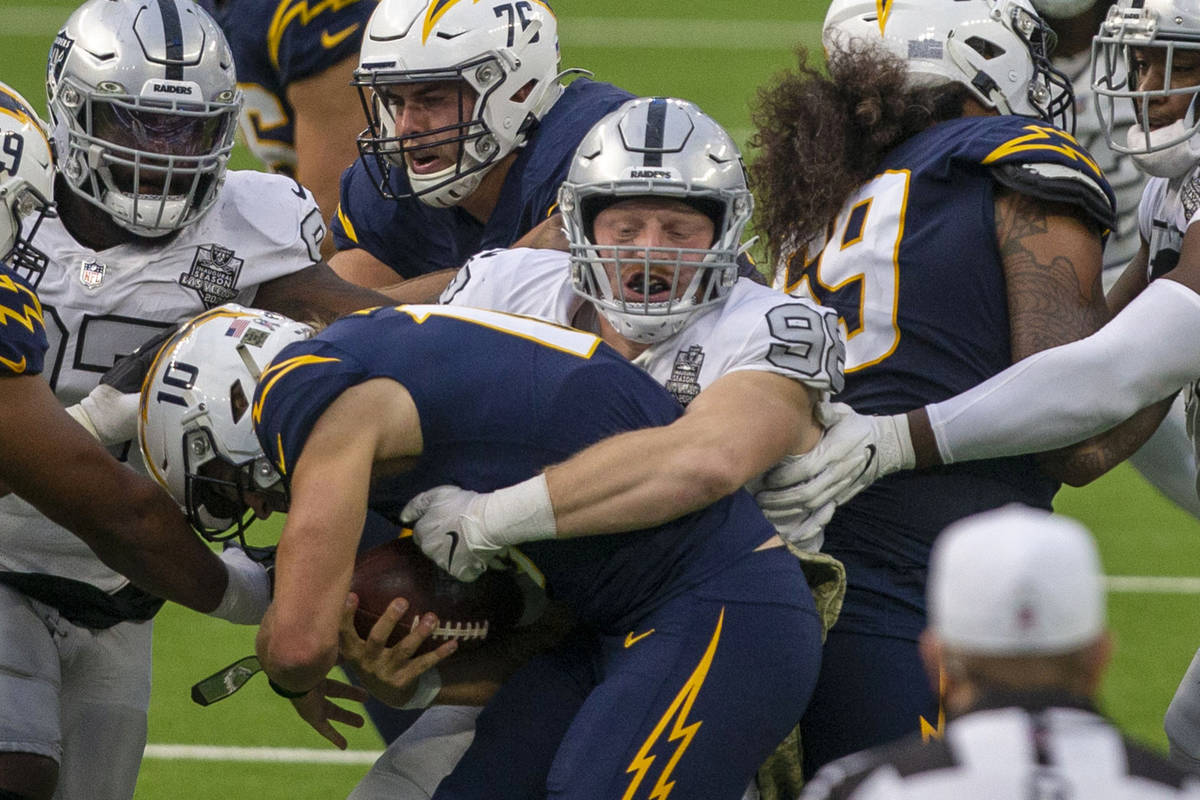 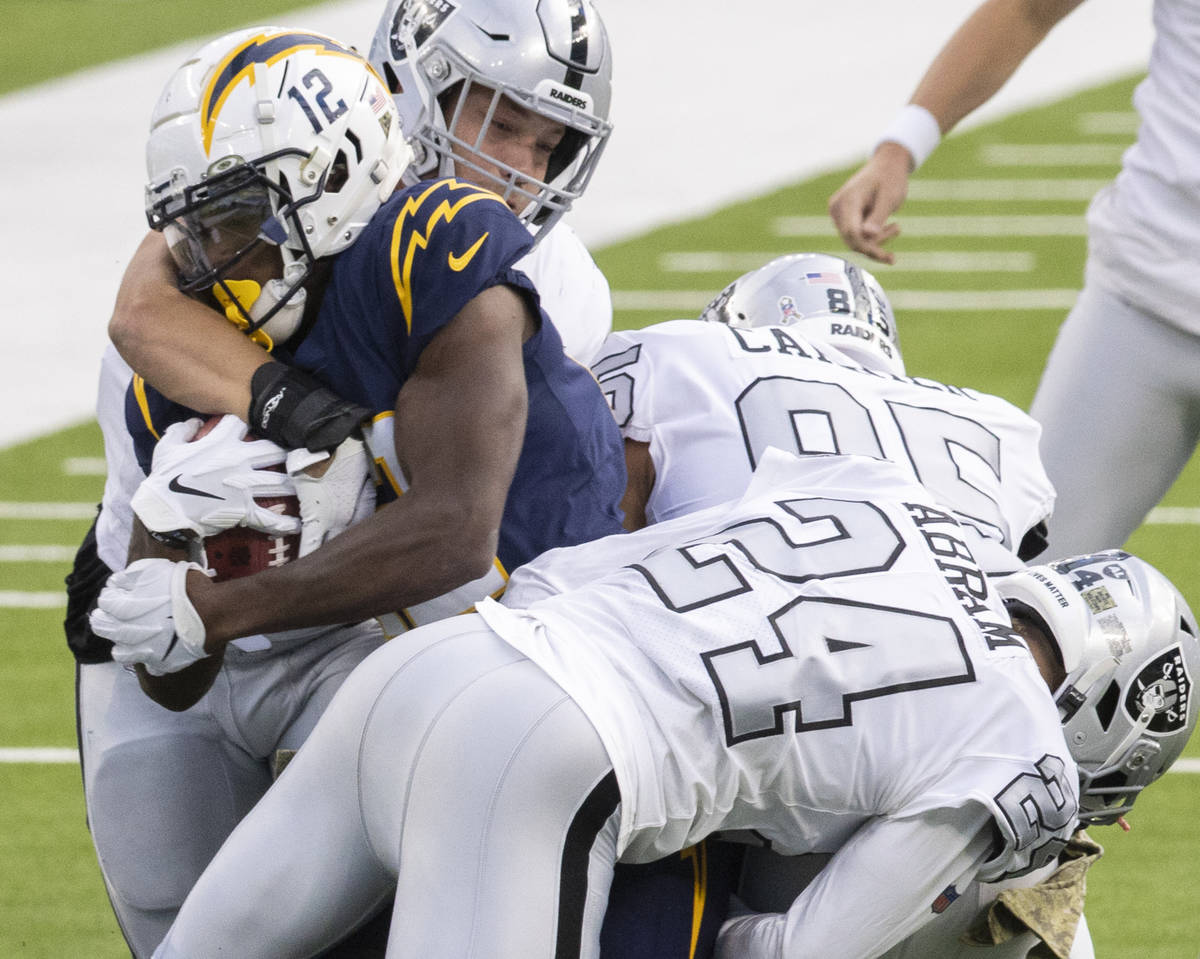 Jon Gruden might have erred on the side of illogical Sunday, but his faith in a struggling Raiders defense paid off.

Just not until his guts were turned inside out awaiting the result of a single video review.

We have reached the midpoint of the 2020 season and here sit the Raiders, all 5-3 and rightly happy with themselves after a wild 31-26 win against the Chargers on Sunday at spectacular SoFi Stadium.

It came to this — the officiating crew correctly overturning a Los Angeles touchdown on the game’s final play to deliver Las Vegas its victory — in large part because Gruden put his team’s fate in the hands of its defense.

The Raiders, at the time averaging nearly 7 yards per carry, punted on fourth-and-2 from the Chargers’ 42 to open the fourth quarter. Los Angeles then staged a 12-play scoring drive to pull within two at 28-26.

Las Vegas then chose a 31-yard field goal from Daniel Carlson with 4:37 left and facing fourth-and-2 from the Los Angeles 13.

I don’t get the first decision at all but am all-in on the second. Force the Chargers — who so often Charger themselves into a loss — to drive the field for a touchdown to win. They dang near did, too, against a Las Vegas defense that ranks 25th in points allowed and 21st in yards allowed.

But this is sports. It also occurred not 28 miles from Hollywood. Which means the biggest plays are often made by the most implausible of names. Storybook stuff.

That was Isaiah Johnson.

“He got baptized into the NFL,” Gruden said of his second-year cornerback out of the University of Houston. “Thank goodness for Isaiah Jonhson and his length.”

The player who spent this week mourning the death of a close friend and former college teammate successfully defended the last two passes of the game, both in the end zone.

Jonhson first broke up an attempt from rookie quarterback Justin Herbert to Mike Williams and then shook the ball loose enough from Donald Parham Jr. that what was initially called a game-winning touchdown was reversed on replay.

“(Johnson’s) number was called and he needed to step up,” Raiders quarterback Derek Carr said. “He had a tough week and as a team, we just kind of wrapped our arms around him. That’s the story … To be the guy who knocked the ball out and win the game for us, someone give him a lot of credit.”

Chargers quarterback Justin Herbert is a very good player who, health willing, will one day be terrific. But like Carr, he was operating behind a makeshift line. And a Raiders defensive front that has offered little consistent pressure at all this season managed to disrupt him just enough.

This was one of the better games Clelin Ferrell has played for Las Vegas, the No. 4 overall pick last year whose draft stock was called into question often in 2019 given a lack of production. He totaled four quarterback hurries and added a tackle for loss. Mostly, the defense survived. It’s also hurting, now woefully thin at cornerback because of injury.

But you can’t debate 5-3 overall and 4-1 on the road against what was the NFL’s toughest schedule through six games. The second-place Raiders are now three games clear of the Chargers in the AFC West and two of the Broncos, who visit Allegiant Stadium on Sunday.

It’s breathing room created from those excruciating minutes of an official watching all angles of a game’s final play before rendering a decision that left one set of coaches and players euphoric and another incredibly dejected.

“You can only imagine,” Gruden said. “That’s why you’re in this business. Why fans love it. What makes the world go round. The excitement. The thrill of victory and agony of defeat. That pretty much summarizes it.

“I wish Jim McKay was here to say it for me.”

The famed broadcaster once said that when we are tripped up by something, we learn and it makes things exciting. Gruden put his team’s fate in the hands of its defense Sunday. It didn’t trip.

But, man, was it ever exciting.