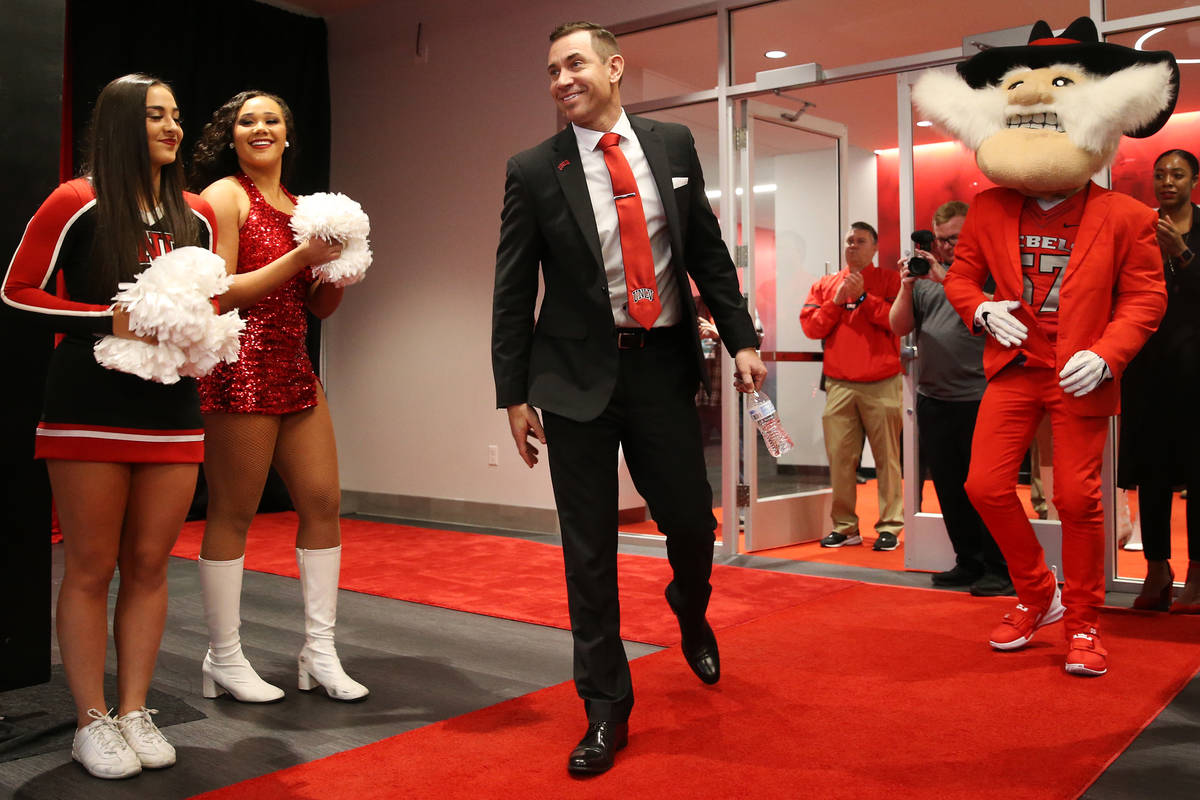 If you wrote home about any UNLV success in football the last few decades, you wouldn’t need more than one sheet of paper. You would also struggle to fill a third of it.

Every five years or so, then, another head coach is hired to assume the role of potential creator of relevance. Marcus Arroyo is next up. It’s his job to raise a sunken ship, the result of UNLV having offered just one winning season in the last 19 years.

The Rebels open what is sure to be the most unconventional of seasons against San Diego State on Saturday night at Dignity Health Sports Park in Carson, California.

The Aztecs are in the midst of building a 35,000-seat, state-of-the-art, multipurpose stadium for its football program in Mission Valley, a short drive from campus. It is scheduled to open in the fall of 2022.

But no matter the venue, few Mountain West opponents would test the current competency of an Arroyo-coached team like San Diego State. It has won 10 or more games four of the last five seasons and has appeared in 10 straight bowl games. Other than Boise State, the Aztecs are who Mountain West teams gauge themselves against.

“A lot of success,” Arroyo said of San Diego State.

He has no head coaching experience and yet that hardly means Arroyo won’t prove to be the right person and then some to do what so many before couldn’t.

It’s really not about rebuilding UNLV football. More like creating something from nothing. Since their inaugural Mountain West season in 1999, the Rebels are 68-161 overall.

They have drifted on a life raft for years on end, hoping to eventually put their feet on dry land where they can build a successful program that will last. Some who know Arroyo best believe him capable of delivering such progress.

“He never got too high on the highs or low on the lows,” said Fitz Hill, head coach at San Jose State in 2001 when Arroyo set a then single-game NCAA record for passing efficiency, completing 21 of 26 passes for 476 yards and five touchdowns in a 64-45 victory over UNR.

“He always knew reality was in the middle. When he became a student assistant for us after his senior year, you could tell he was meant for the coaching profession because of his demeanor. Kids respond to him and, because of that, they will respond to the challenges that football presents.”

Dave Baldwin was San Jose State’s coach from 1997-2000 and remembers a game against 22nd-ranked Oregon at rowdy Autzen Stadium during Arroyo’s freshman season. It was after his team’s first series of what would be a 58-3 loss when the coach had some words for his young quarterback.

Baldwin told Arroyo to be louder with his snap count. Arroyo told Baldwin that he couldn’t even hear himself.

“But the thing is, even as a freshman, he never panicked, and that was the loudest crowd I’ve ever been associated with,” Baldwin said. “Marcus is just a terrific leader. The way he treats kids is outstanding. He has seen the best of the best and he played at the worst of the worst. So he has developed a philosophy on how to win no matter where he is at.”

UNLV had no spring practice. COVID-19 saw to that. It released a depth chart this week absent several names thought to be key returning players. It will pull into the Carson facility a two-touchdown underdog.

When it comes to coaching, new beginnings around this program have almost always produced forgettable endings. Arroyo is intent on changing that. So too were several others, but none could produce any sense of positive consistency on a scoreboard.

So whether his team upsets San Diego State or travels home 0-1, Arroyo clearly understands this is not a one-result job. At least he should.

“It’s the first time I have sat in this chair,” Arroyo said. “First time I’ve had to do some of the things we’ve done. You can’t anticipate them. In a perfect world, you hopefully have prepared enough to take on this different role.”

The deepest sunken shipwreck ever discovered rested at 20,406 feet.

At which depth UNLV exists can’t totally be known, but the vessel remains stuck there.

It’s on Marcus Arroyo to begin its ascent.