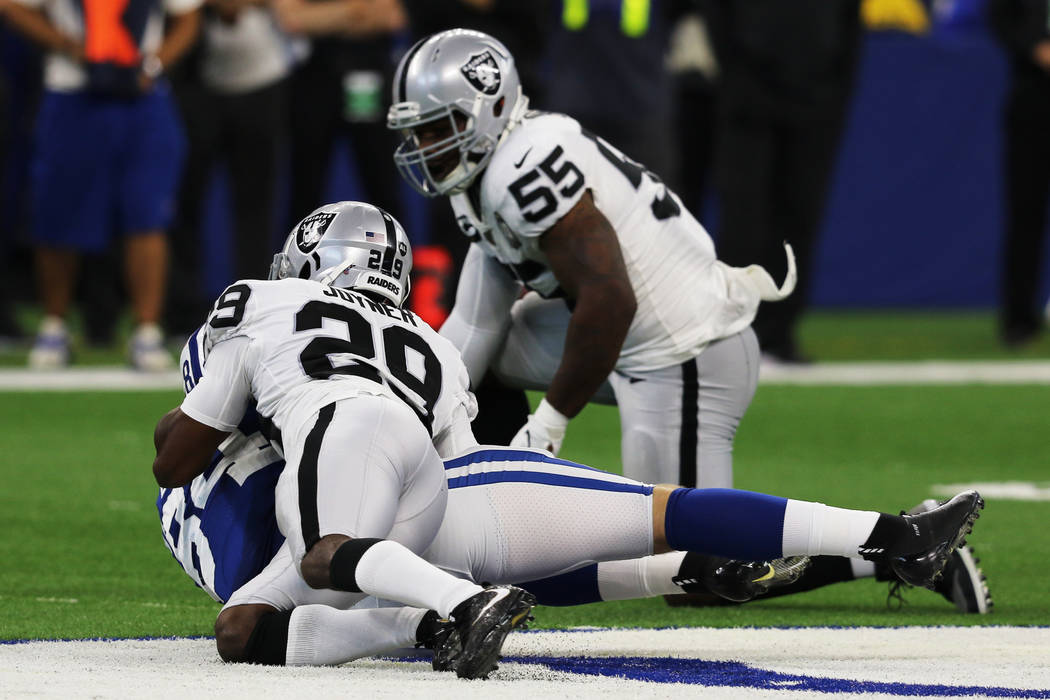 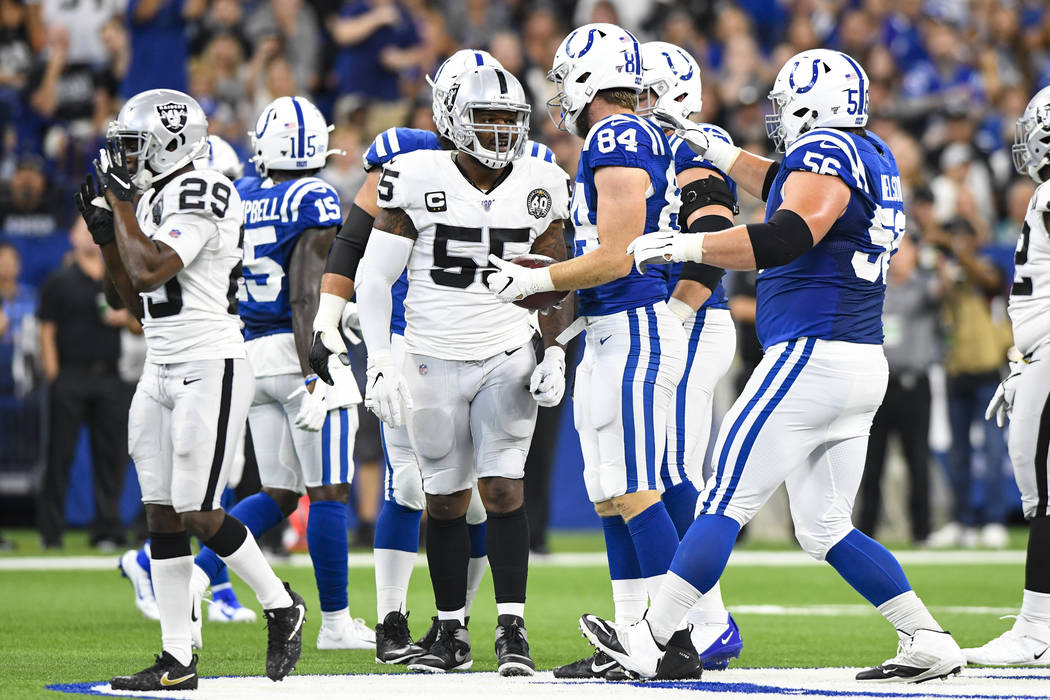 Oakland Raiders outside linebacker Vontaze Burfict (55) speaks with Indianapolis Colts tight end Jack Doyle (84) after his helmet-to-helmet hit on Doyle during the first half of an NFL football game in Indianapolis, Sunday, Sept. 29, 2019. Burfict has been suspended for the rest of the season for the hit. (AP Photo/Doug McSchooler) 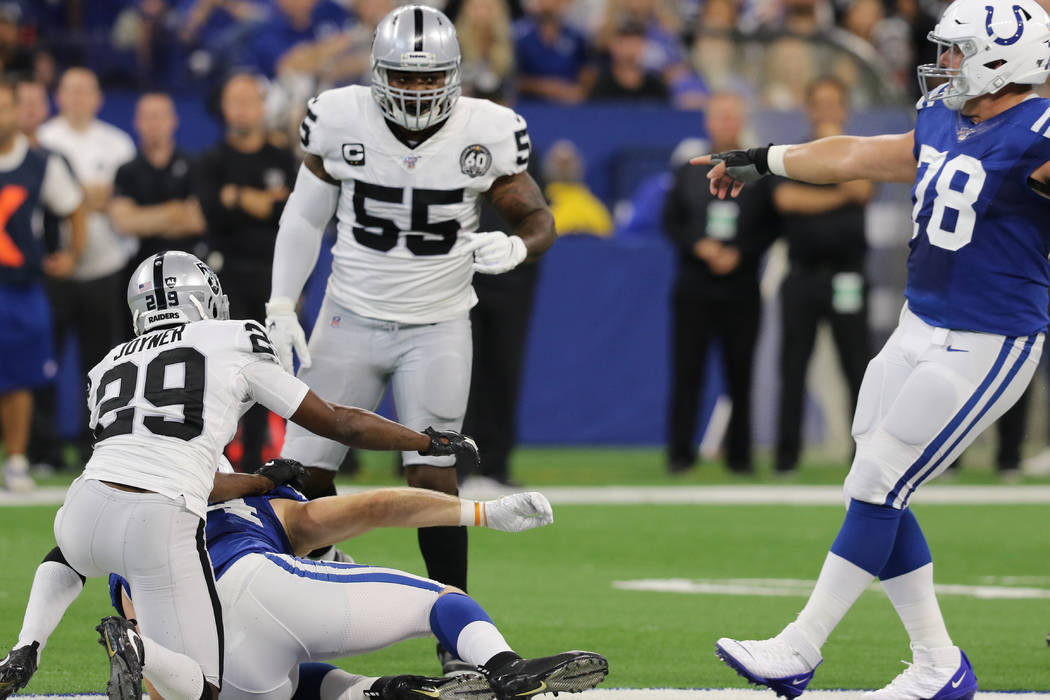 If there was a page in the latest edition of the dictionary dedicated to the NFL’s call to action on limiting head injuries, it would include a hand-drawn illustration of Raiders linebacker Vontaze Burfict.

The sketch would come from Sunday’s win at Indianapolis, from the play which ultimately led to Burfict being ejected and subsequently suspended by the league without pay for the remainder of the season.

You want a perfect depiction of what not to do as a defensive player in 2019? That’s it.

When initiating a helmet-to-helmet hit on a defenseless tight end in Jack Doyle, Burfict was yet again flawless in his disregard for any level of safety.

History suggests as much with an exclamation point.

Burfict has a league-leading 23 personal fouls since 2012, and his 15 infractions for unnecessary roughness over that time are also tops across the NFL. He has since 2016 twice been suspended for such hits and once for violating the league’s policy on performance-enhancing substances.

In other words, reputation earned.

He has, more than any player, shown an inability (or, well, desire) to accept how the game is both played and called now. It’s certainly not a preferred style for defensive players reared on the notion that the more violent a hit, the better. But such is the reality of an NFL trying to lessen the number of concussions throughout its game.

Most players have reluctantly accepted this.

“When I was playing, nothing is called on that hit (Sunday),” said Mark McMillian, a former NFL cornerback who missed just one game over eight seasons (1992-99) with five teams.

“Burfict is the NFL’s answer to Dennis Rodman — because of his past and reputation as a dirty player, everything is going to be scrutinized. You saw worse things than that Sunday in other games not get called at all. But the way the game is now, and how he is viewed, I agree with a suspension, just not the entire year.”

McMillian said playing defense now in the NFL is like 7-on-7. “It’s nearly impossible. God rest his soul, but when I played with (former safety) Andre Waters in Philadelphia, he started each game telling the opponent, ‘Either you’re going to sleep or I am, but someone is going to sleep today.’ Andre didn’t care. Someone was getting knocked out. That’s why Michael Irvin with the Cowboys never ran crossing or inside routes against us. He knew Andre was just waiting.”

Waters is an ideal and yet tragic example of the league’s crackdown on such hits. He was 44 when committing suicide in 2006 by shooting himself in the head. His brain tissue was then tested and found that he had developed chronic traumatic encephalopathy (CTE) and had been functioning cognitively at the level of an 80-year-old man with Alzheimer’s disease.

Too many hits trying to put others to sleep.

I would hope both past and present players, far more educated now on the perils of CTE, would agree that Burfict not only crossed that dangerous and avoidable line Sunday, but that his constant indifference to such matters is inexcusable.

Guys who came before have seen firsthand what head injuries have done to their NFL brothers, many now having died at their own hands. The way Burfict plays isn’t good for anyone.

The Raiders signed him to a one-year deal for several reasons, and not just because he had few other suitors and a history with defensive coordinator Paul Guenther, who called the move a “leap of faith.”

Truth is, Burfict was always a liability as the team held its breath hoping he wouldn’t commit another egregious penalty such as the one Sunday.

But he did and now he’s rightly done for the season (pending appeal), and the Raiders have not-so-gloriously struck out with two (Burfict and wide receiver Antonio Brown) of their three controversial off-season transactions.

Which means as we welcome October, offensive lineman Richie Incognito has, to this point, emerged as the most balanced and responsible of all three.

Let that sink in.

Which means that when it comes to leaps of faith, the Raiders might be better served keeping two feet on the ground and thinking twice next time.