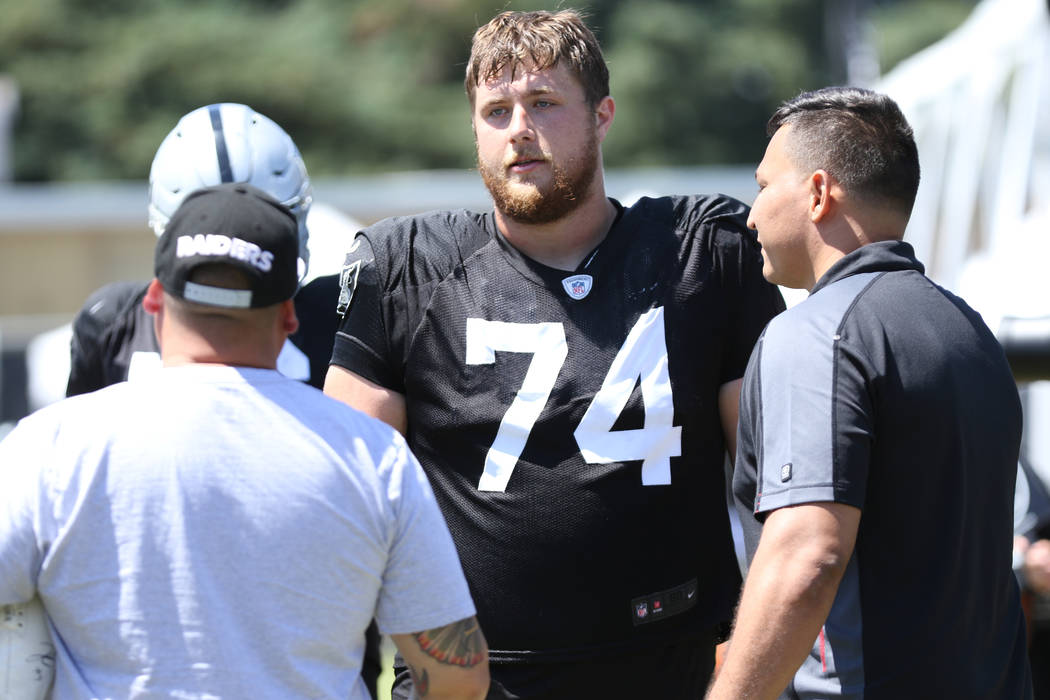 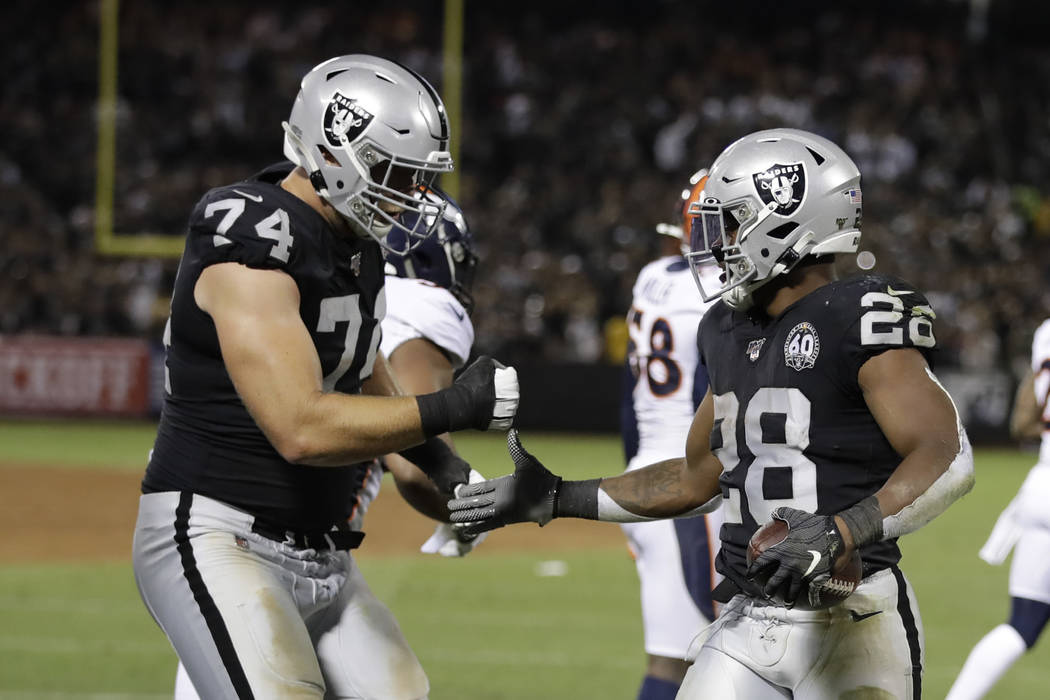 Oakland Raiders running back Josh Jacobs, right, is greeted by offensive tackle Kolton Miller (74) after scoring a touchdown during the first half of an NFL football game against the Denver Broncos Monday, Sept. 9, 2019, in Oakland, Calif. (AP Photo/Ben Margot) 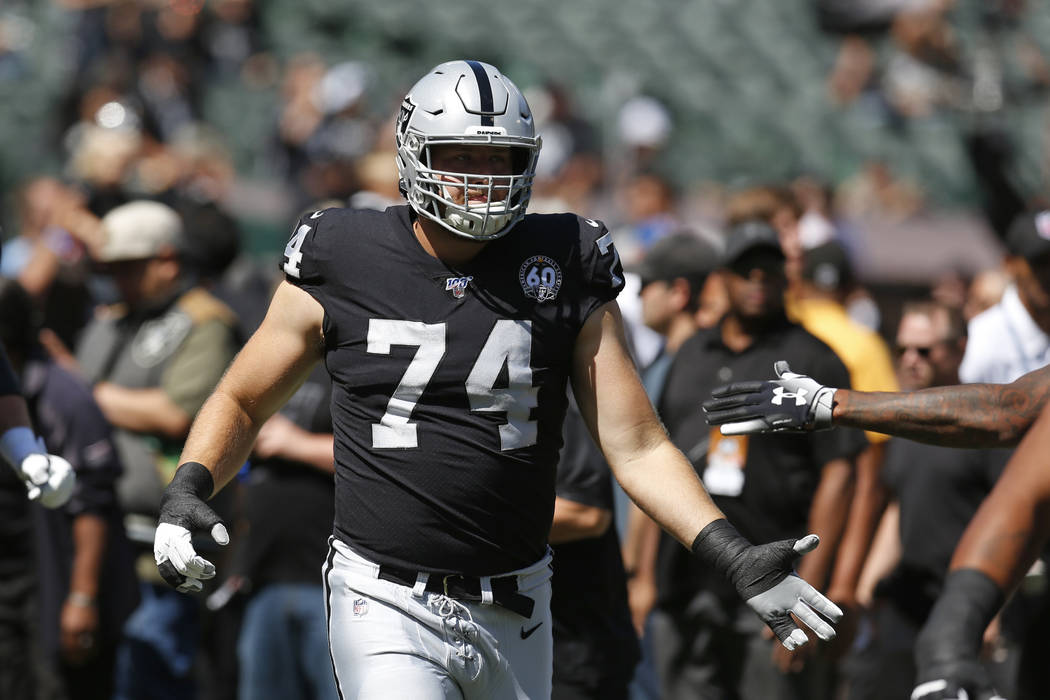 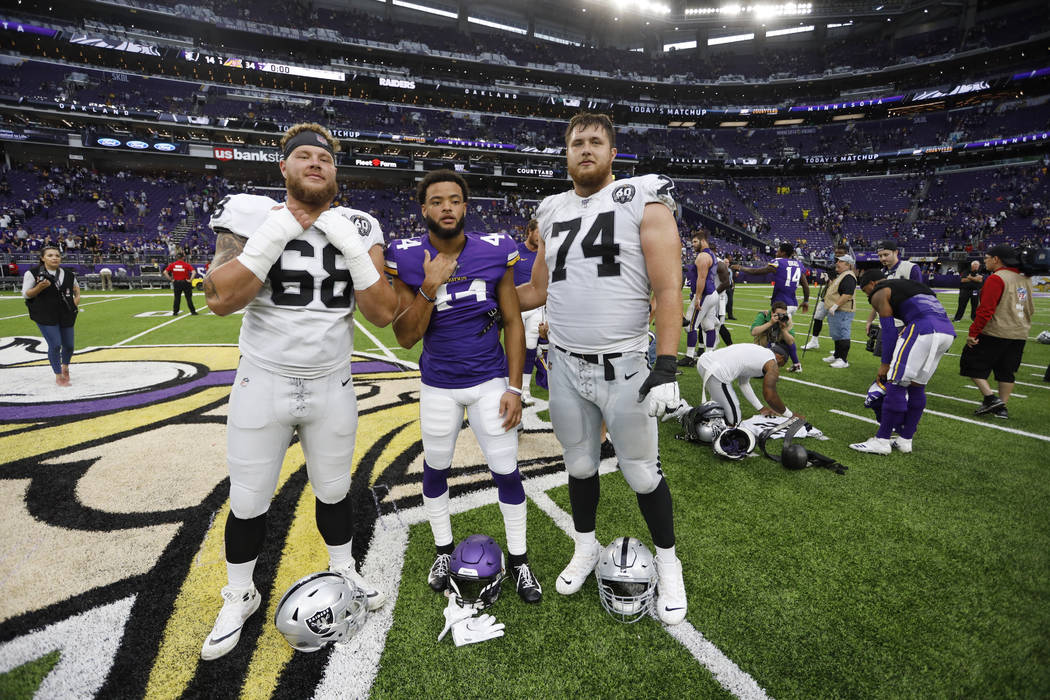 LONDON — On the northern outskirts of a small Hertfordshire borough named Watford sits a Warner Bros. studio, where costumes and sets and props from the Harry Potter films are stored.

How helpful then, might it be, for Kolton Miller to simply wave a wand at those bull-rushing him come Sunday.

Problem: Voldemort has nothing on Khalil Mack, a whole different level of menacing.

Miller and the Raiders hope like anything his performance at left tackle against the Bears at Tottenham Hotspur Stadium far surpasses that of his in London last season, when the then-rookie out of UCLA was playing on one leg opposite Seattle and failed to block much of anyone.

Miller probably shouldn’t have suited up for the 27-3 blitzing by the Seahawks in Week 6 at Wembley Stadium, having badly sprained his knee two games earlier.

But he put on a brace and forged ahead to start all 16 games, something the guy responsible for protecting quarterback Derek Carr’s blind side now believes himself much better for having experienced.

“I think that I’m improving and getting better each game,” Miller said. “And now there is a chance to go test yourself against one of the best pass rushers in the league.”

Not far from where Miller spoke under gray clouds Thursday, down a long and winding tree-shaded road bordered by the rolling hills of an English countryside straight from the pages of Jane Austen, was a cemetery filled with old headstones.

It’s the sort of imagery attached to all the offensive linemen Mack has dominated.

But one who hasn’t yet been fitted for space in such a graveyard of embarrassed behemoths, far from it, is Raiders right tackle Trent Brown.

In fact, it was Brown who, when playing for the Patriots last season, cast his own wizardry spell and made Mack disappear.

Film of that effort, a 38-31 victory by New England in which Chicago’s perilous front managed to sack Tom Brady just once, has many thinking that Mack on Sunday will begin his pursuit of Carr more times against a left tackle than his customary right.

Which means the idea about Miller getting better each week — he has been more steady than not, terrific in a season-opening win against Denver and not-so-much in a blowout loss at Minnesota — sure better not take hiatus.

Four games into 2019, the Bears have shown little-to-no regression defensively from a side that had 36 regular-season takeaways and 50 sacks last year. The more you focus on Mack, the more a fellow edge rusher like Leonard Floyd shines. The more offenses try and create different wrinkles to slow the league’s best pursuers of the ball, the more they suffocate under them.

“The problem is you’re not just scheming for (Mack),” Raiders coach Jon Gruden said. “Floyd is not a bag of rocks. The guy is a great player. They also have two of the best inside players in the league and a great blitz scheme, so it’s easier said than done.

“(But) that’s why we (signed) Trent Brown, and that’s why we drafted Kolton Miller in the first round. Those guys are going to have some tough snaps (Sunday).”

It’s the latest test for a player trying his best to move on from a forgettable first season, when the toughness he showed in competing through pain couldn’t overcome analytical shortcomings: Miller ranked the league’s 60th best tackle, allowing an NFL-high 16 sacks and 65 pressures.

Among those numbers were two strip sacks recorded by then-Seattle end Frank Clark in the London debacle.

Now, Miller gets an even tougher assignment across the pond.

He hasn’t yet tried tea and crumpets — it might take all of the spongy muffins in this township to satisfy the 6-foot-9, 309-pounder — but has enjoyed some “great” fish and chips. He would also be smart to limit such intake, given the quickness and athleticism of the player he’s about to face.

“You can’t get too excited because you’re playing (against Mack),” Miller said. “That will just get you off balance and work for his power. You really have to just dial into your fundamentals. If you over-think it, that opens up a whole can of worms.”

In the world of Harry Potter, a Flobberworm can be defeated by a wave of the wand.

Things likely won’t be so simple for Miller on Sunday.