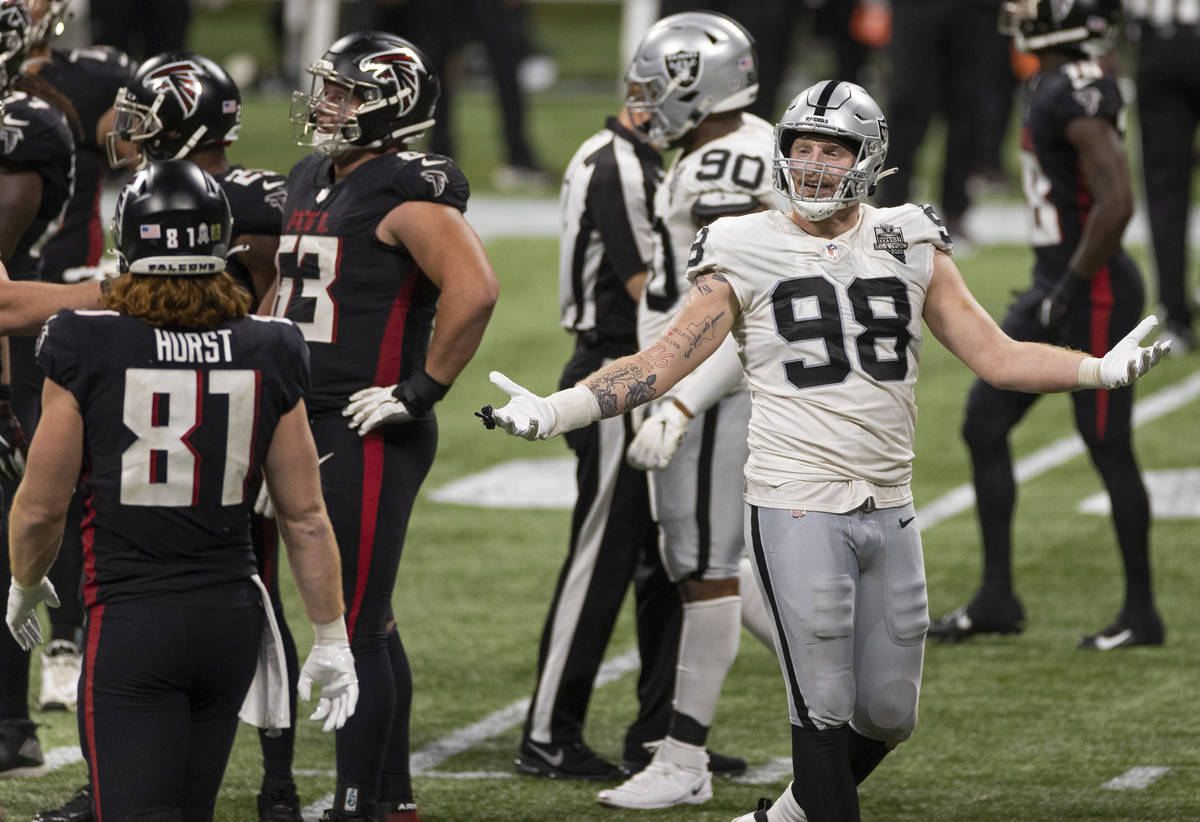 Las Vegas Raiders defensive end Maxx Crosby (98) gestures towards the bench in frustration in the third quarter during an NFL football game against the Atlanta Falcons on Sunday, Nov. 29, 2020, at Mercedes-Benz Stadium, in Atlanta, Ga. (Benjamin Hager/Las Vegas Review-Journal) @benjaminhphoto 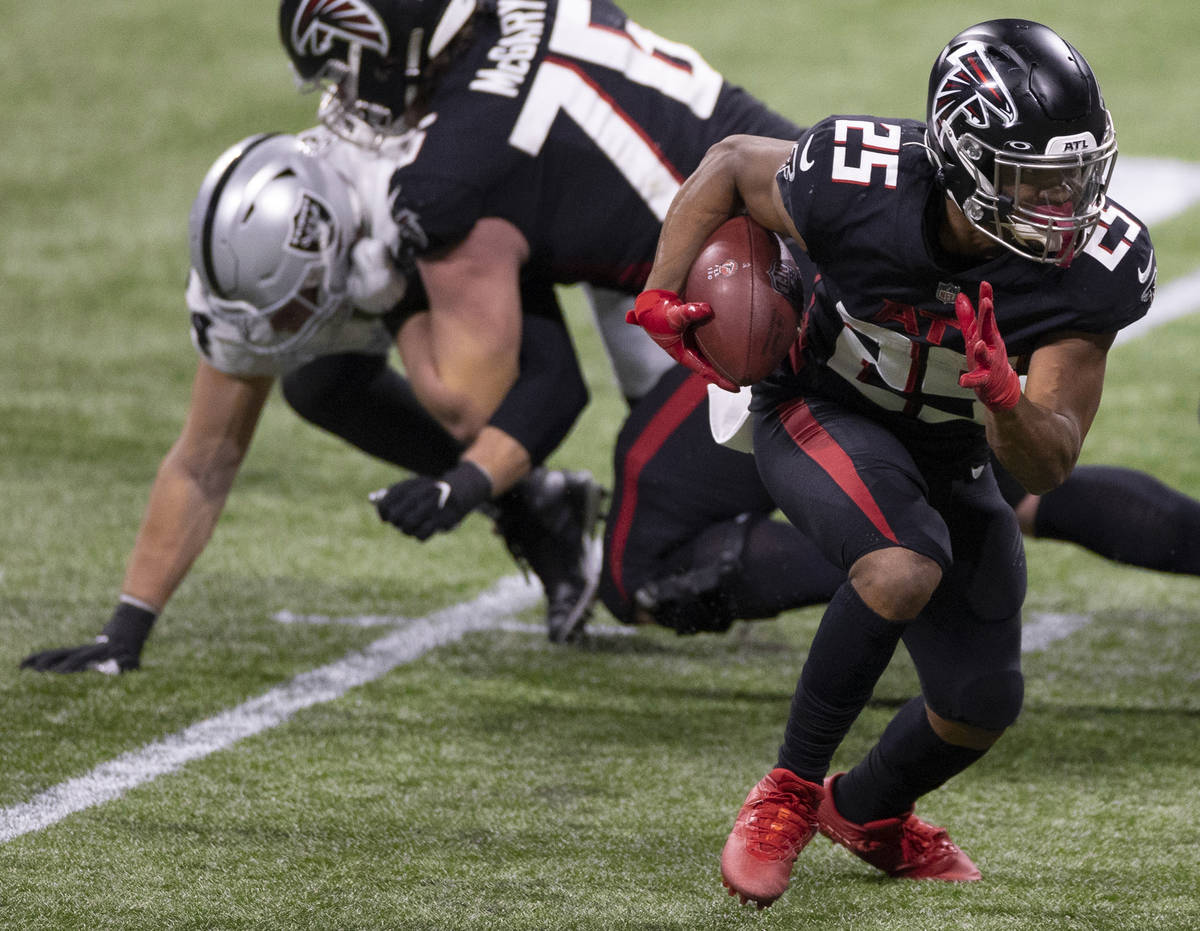 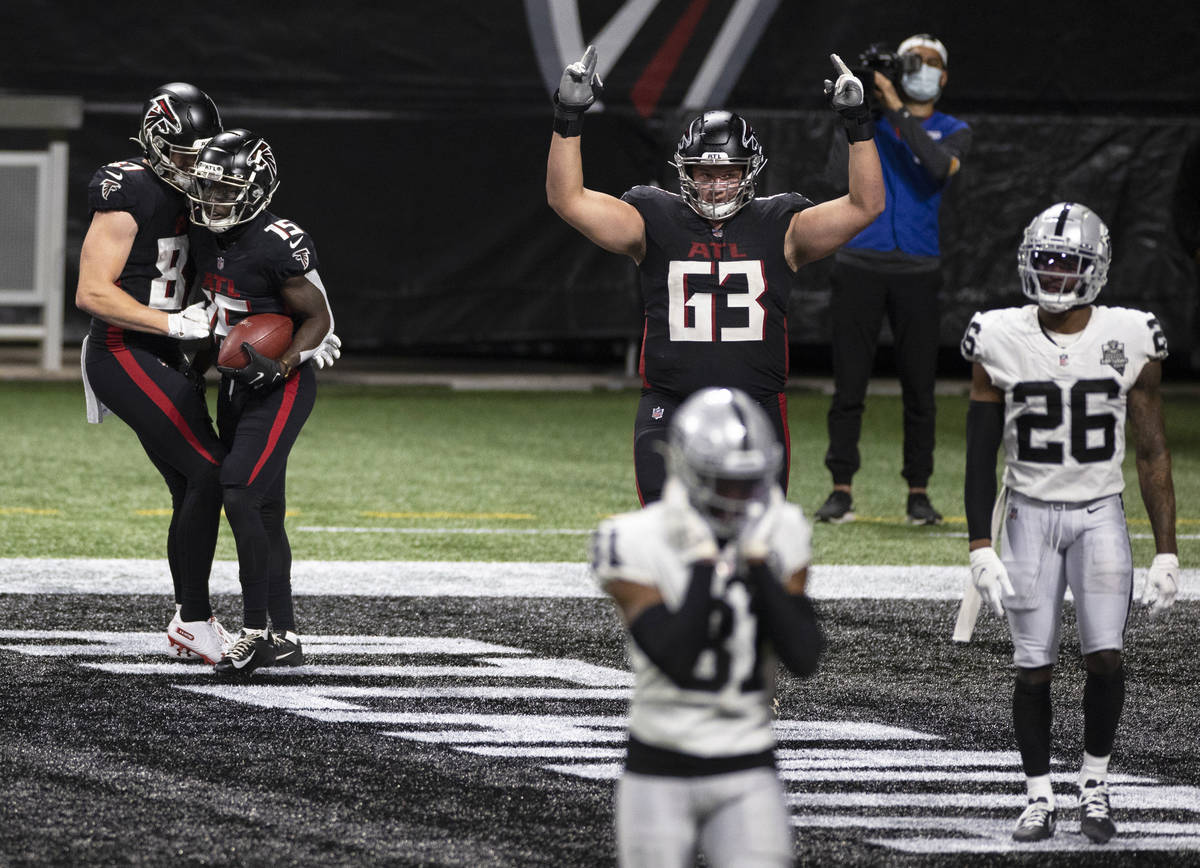 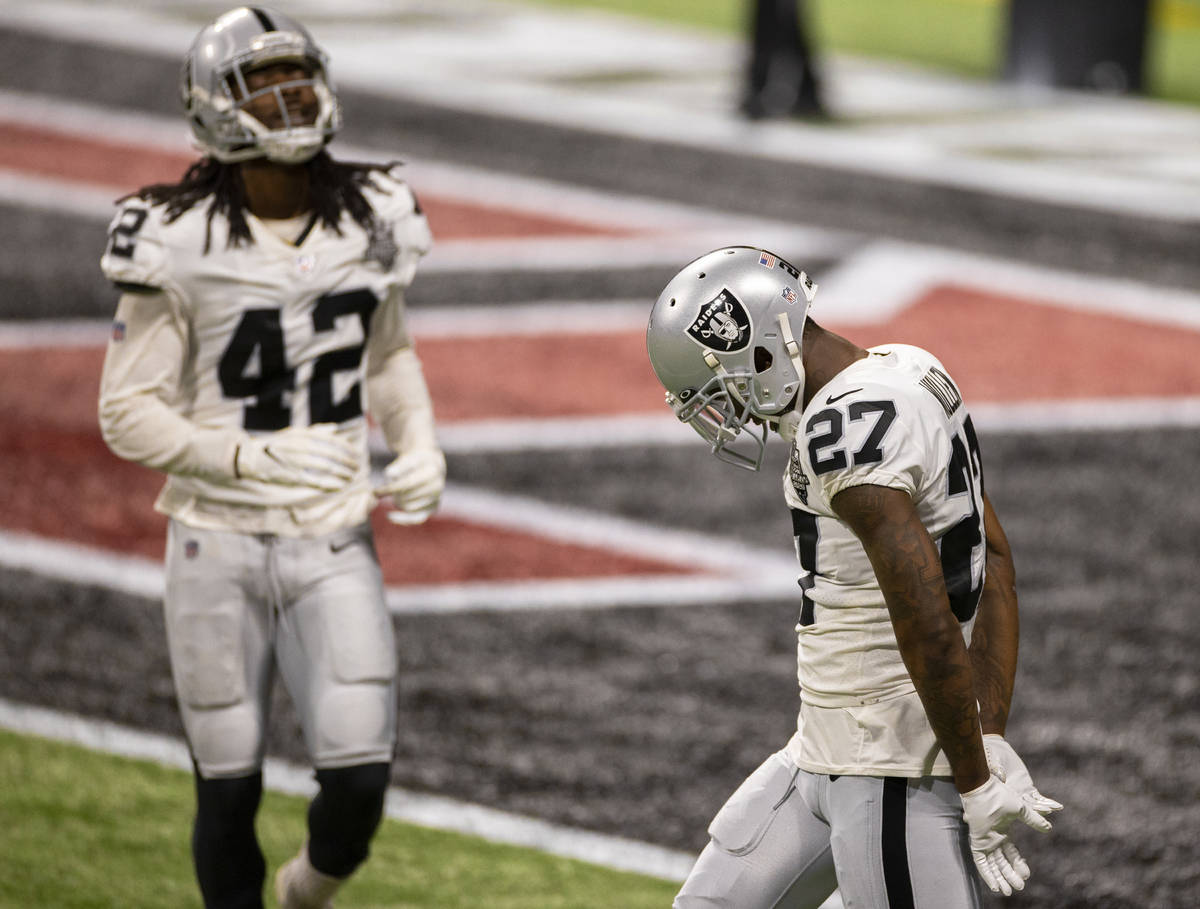 Las Vegas Raiders cornerback Trayvon Mullen (27) and Las Vegas Raiders outside linebacker Cory Littleton (42) walk off the field in frustration after giving up a touchdown in the third quarter during an NFL football game against the Atlanta Falcons on Sunday, Nov. 29, 2020, at Mercedes-Benz Stadium, in Atlanta, Ga. (Benjamin Hager/Las Vegas Review-Journal) @benjaminhphoto 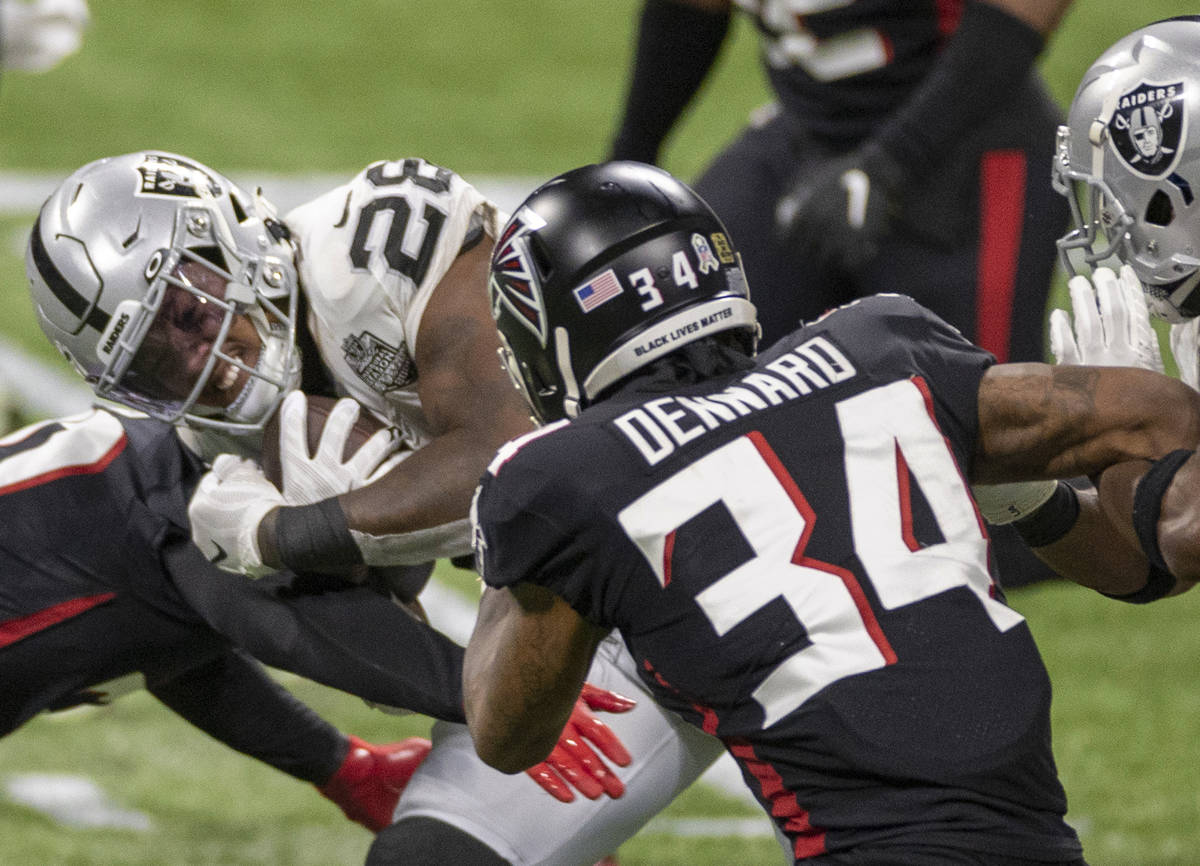 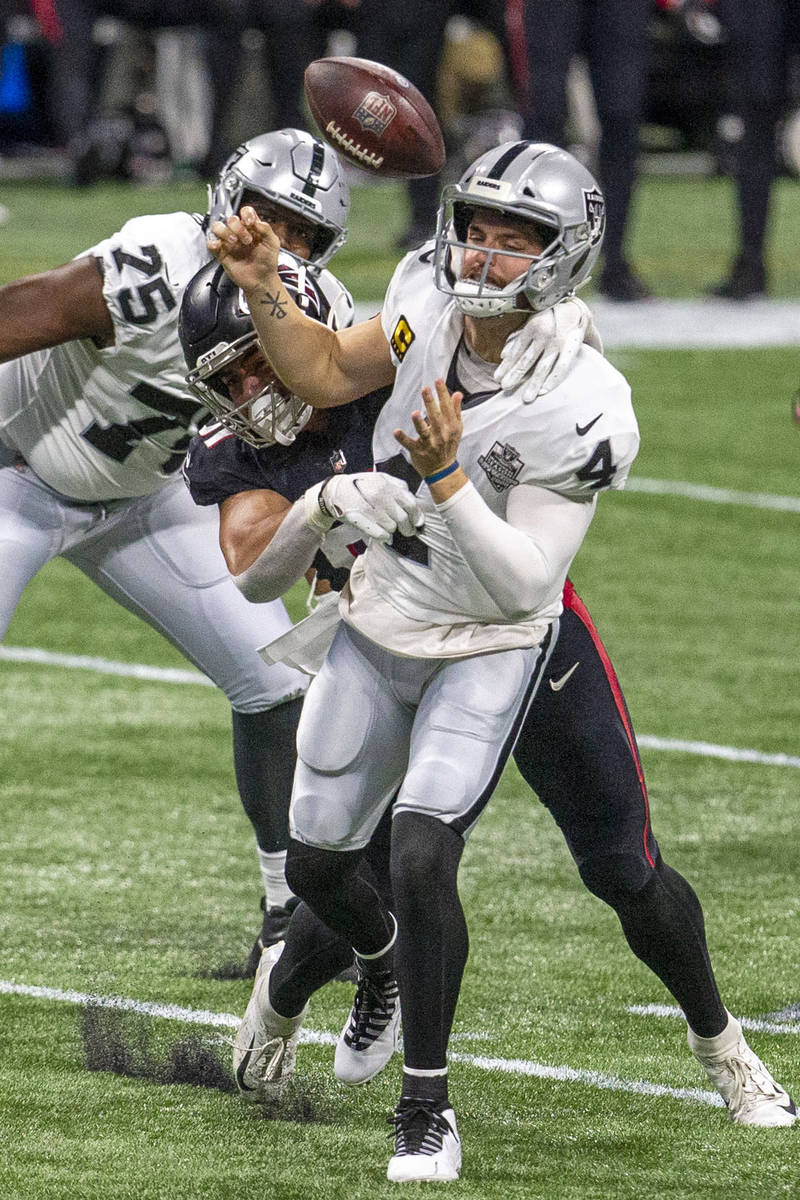 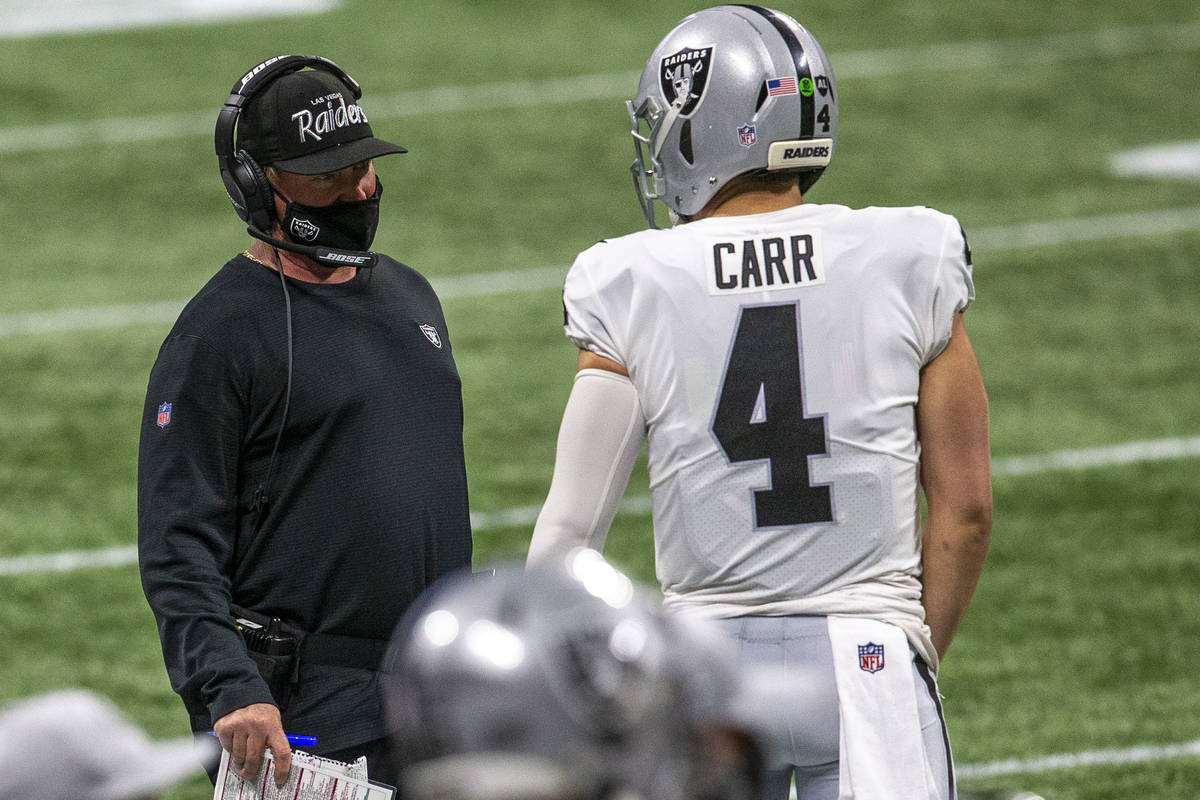 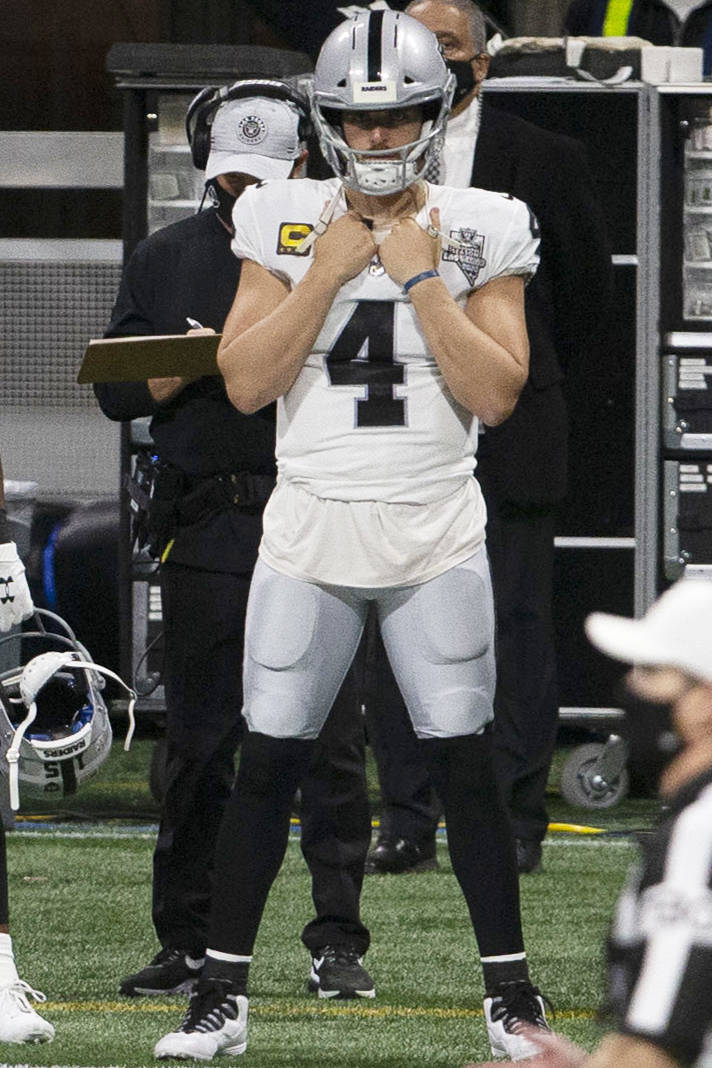 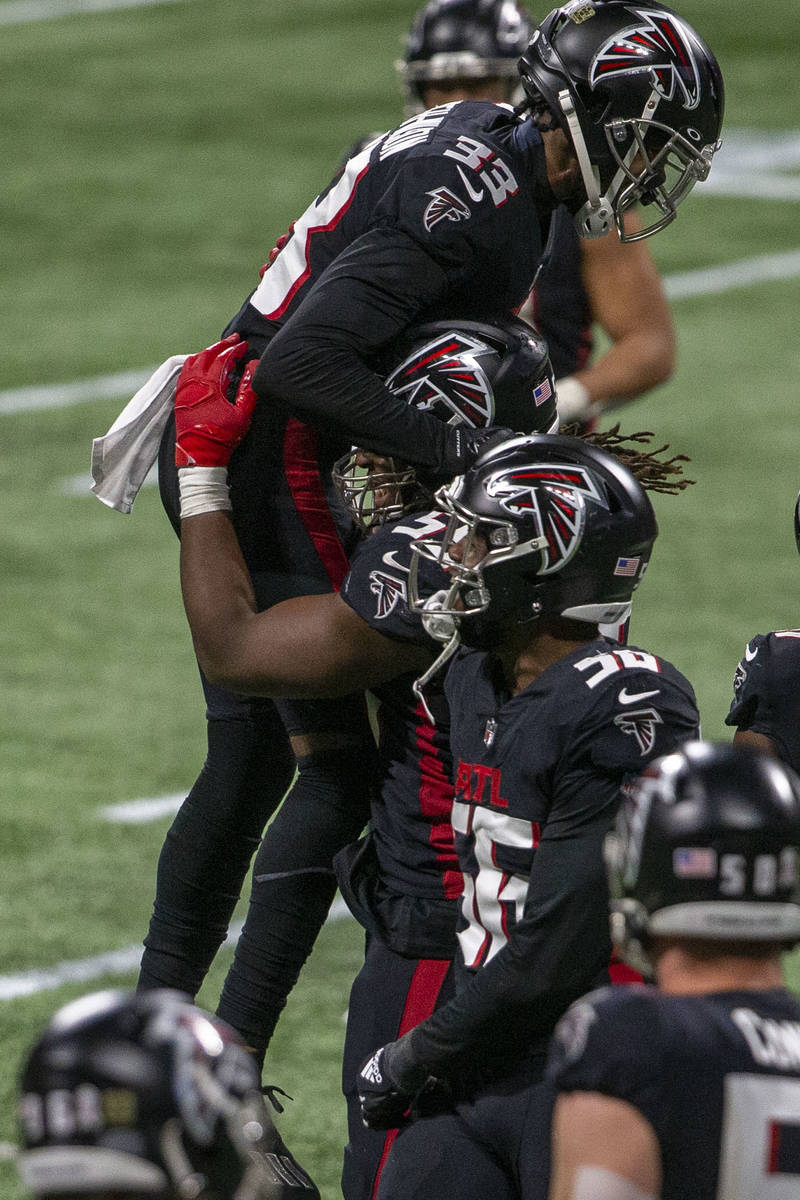 ATLANTA — Derek Carr said it this week and Jon Gruden agreed. That the Raiders could rely on their offense to win a football game any way that was needed. They could pass and win. Run and win. Win in whatever manner weather might dictate.

Well, as they proved on Sunday in Atlanta, there is one way they can’t win: That’s when they absolutely stink.

That’s one way to describe what transpired at Mercedes-Benz Stadium, where the Raiders produced their most forgettable result of the season in a 43-6 loss to Falcons.

To an Atlanta team that began the season 0-5 before firing its head coach and was a 3-point underdog to Gruden’s side.

A team in Atlanta that ranked 29th in total defense and 31st in passing defense in the 32-team NFL. That was missing its starting running back and best wide receiver.

“This is one of those you want to watch it, correct it and burn the film because you’re like, ‘That’s not who we are,’” Carr said. “But it is. We put it on film. It is what it is.

“There’s two ways we can handle it. We can say, ‘Ah, crap,’ and keep giving into it. Or we can grit our teeth, like I think our team will, and get ready. Because we have a team that kicked the crap out of us last year next. They beat the dog out of us last time, so we better get our minds right.”

Ah, yes. The Jets and those comparisons to then and now.

But first, the debacle that was Sunday and why it might have occurred.

The Raiders never showed up. Looked like they never went to bed, which given a few players (including wide receiver Henry Ruggs) were tweeting Saturday night about the Mike Tyson-Roy Jones Jr.. fight around midnight local time, certainly didn’t speak to an early-to-bed, East-Coast-start-time strategy.

There was zero focus. Zero continuity. Zero good. The lack of execution bordered on laughable. Carr followed his best game of the season in a 35-31 to loss to Kansas City with by far his worst. It was one of his lowest points in seven years as the team’s quarterback.

He turned the ball over four times. Threw a terrible pick-6. Added to his now total of 31 fumbles since entering the league in 2014, most in the NFL during that period. Received little help from those blocking for him. He was pressured far too much. There was no run game to speak of. Not a hint of one.

Carr said be believed such a collapse actually began with an inferior week of practice, that things just weren’t as crisp as they needed to be, no matter the impending opposition.

Who’s fault is that?

Answer: Each and every coach and player.

Humility is a crucial ingredient to sustained success. You don’t tell people how good you are. You show them. This was by far a more mental than physical loss, the Raiders obviously happy with themselves after nearly sweeping a regular-season series against the Super Bowl champion Chiefs.

But they didn’t and yet played Sunday as if having taken a huge gulp of playoff talk Kool-Aid. They read a few press clippings, lost whatever edge they possessed and collapsed. Maybe they just can’t handle a little success, is all.

How does it happen? How do some magicians make ropes dance and others walk on water? Sports offer inexplicable results all the time. This one will rightly be likened to last year’s 34-3 loss at the hands of the Jets, when the Raiders traveled east at 6-4 just as they did here.

Next up: At the Jets.

So now we see if they were truly as good as most believed following that second Kansas City game. Or, well, not.

“We didn’t play well,” Gruden said Sunday. “There are plenty of excuses we can make. I credit Atlanta. We have to learn from our mistakes. We have to stay focused. We’ll regroup and hopefully play much better next week … I apologize to the Raider Nation and really compliment the Falcons. They played a hell of a football game and we did not.”

Hard to do so when you stink up the joint.