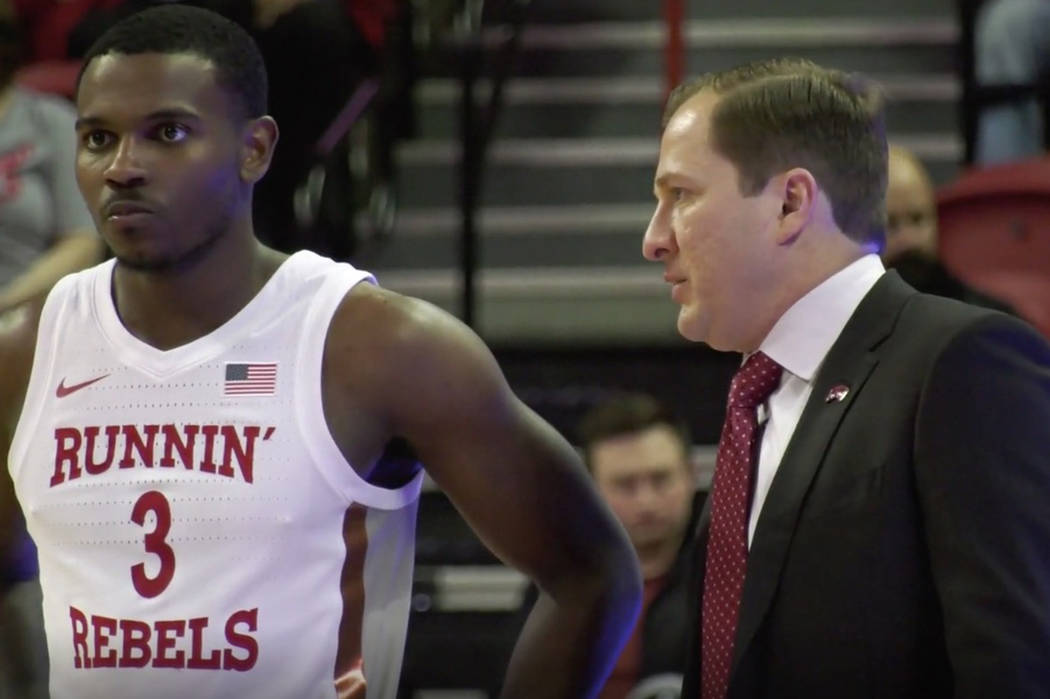 Amauri Hardy and UNLV head coach T.J. Otzelberger on the sideline during a loss to Pacific on Wednesday, Dec. 18, 2019, at the Thomas & Mack Center. (Las Vegas Review-Journal)

If you didn’t believe it after close losses to teams with names on the front of their jerseys far more talented than bodies in them, you can now.

If you didn’t know it following the beat down in Salt Lake City, you should now.

If you didn’t realize it after Texas State, well, perhaps you were watching the Golden Knights and didn’t pay attention.

Yeah. There’s a lot of that going around.

The journey back to respectability for UNLV basketball seems further off than ever, the Rebels on Wednesday night showing to have far more issues than even a 74-66 defeat to Pacific might suggest.

They announced a crowd of 7,023 at Thomas &Mack Center and no matter what the real number was, how this latest loss transpired was disappointing in most every way.

They’re not good at all in the second half of games.

UNLV can’t guard many folks off the dribble and stands around far too much offensively — it shot 6-for-22 on 3s Wednesday — but that’s not the most troubling of trends.

This is: Eleven days had passed between UNLV getting whacked by Brigham Young 83-50, and yet whatever practice and correcting and preparation the Rebels did resulted in them being totally outworked by a midlevel (at best) West Coast Conference team.

“Lack of effort, lack of care, lack of passion,” UNLV coach T. J. Otzelberger said. “I don’t think it’s a basketball thing. I think it just comes down to having the guts to go get a rebound. Some guys have great instincts. Some have the toughness and physicality. I don’t really know what it is.

“Those are a lot of 50-50 balls and if you can’t get those, especially on your home court in front of your home crowd, it’s a huge problem.”

A new coach, more than anything, wants to create a culture and levels of expectations in terms of how his players will act on and off the court. It’s as much part of building a program in one’s image as offensive and defensive strategy.

Early in his tenure, Otzelberger sure seems to be struggling with all of the above.

This isn’t the first time he questioned the team’s effort following a loss, which is disturbing. If you can’t play hard for a first-year coach deciding on whom to give minutes, when can you?

Each played — Tillman scored five points before fouling out in 28:20 of court time and Hamilton had 13 in 18:37 — but this was Tillman’s second time being disciplined.

He’s a junior transfer from Utah who obviously struggles following basic rules, a player who many might have believed could offer some level of leadership to begin the season and has done just the opposite.

“Team rules are really important in this program, and I don’t care who you are or what the reason,” Otzelberger said. “If you don’t do everything we hold a standard to all the time, there’s no slippage, there’s no margin for error. So when guys need to be reminded of that, they will. Consequences will only get more severe if those things happen moving forward.

“I think the most important thing is to have guys that really love basketball. It’s really important, and I’m probably not a great person to relate to people that don’t.”

It’s true that UNLV is short-handed and continues to battle key injuries. To replace Tillman and Hamilton, it started two players (Nick Blair and Marvin Coleman) who were walk-ons last season.

And none of that excuses allowing 15 offensive rebounds and 15 second-chance points to a Pacific side that, while 11-3, ranks 177 in Kenpom with a laughable schedule rating of 349.

“We let this one slip away,” said Blair, who scored 14. “(Players being disciplined to start games) can’t happen. That stuff is unnecessary.”

UNLV should emerge victorious if it responds one way: Show you want to be there, that you’re interested in playing and getting better, that things haven’t gone completely sideways just 12 games into a new coach’s tenure.

Someone show they care, man.