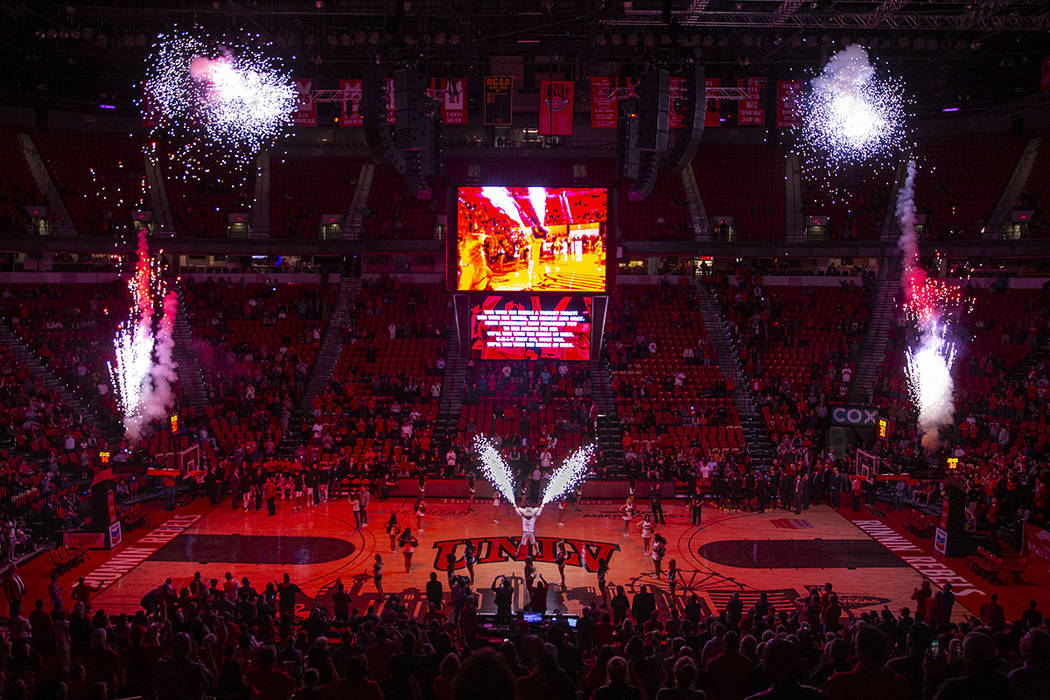 Hey Reb shoots off some pyrotechnics as the UNLV Rebels are set to take on Purdue Fort Wayne during the first half of their NCAA game in the Thomas & Mack Center on Tuesday, Nov. 5, 2019, in Las Vegas. (L.E. Baskow/Las Vegas Review-Journal) @Left_Eye_Images 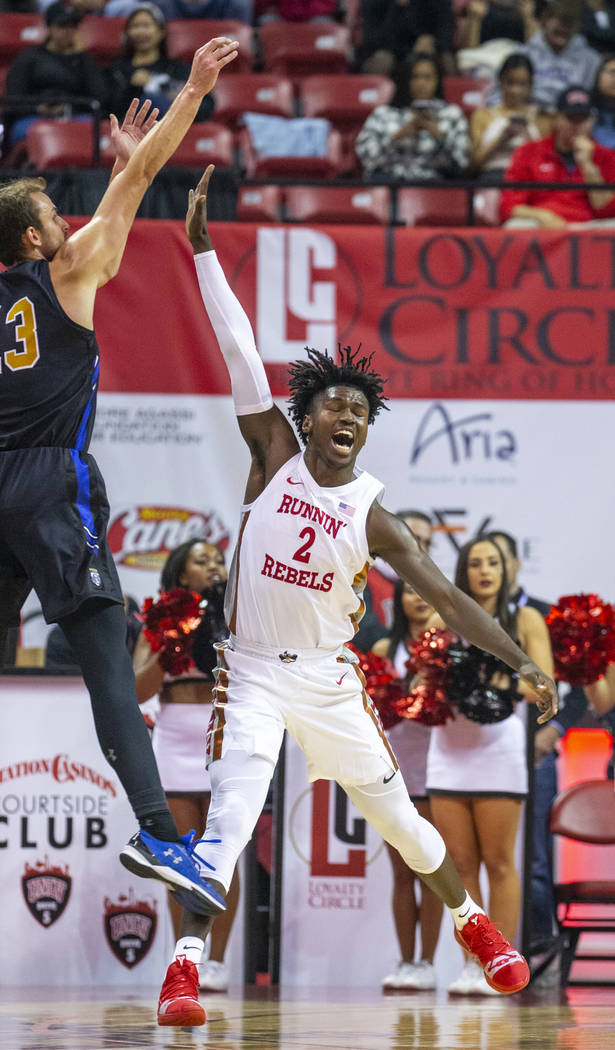 Purdue Fort Wayne forward Matt Holba (13) gets off a shot above defense by UNLV Rebels forward Donnie Tillman (2) during the first half of their NCAA game in the Thomas & Mack Center on Tuesday, Nov. 5, 2019, in Las Vegas. (L.E. Baskow/Las Vegas Review-Journal) @Left_Eye_Images 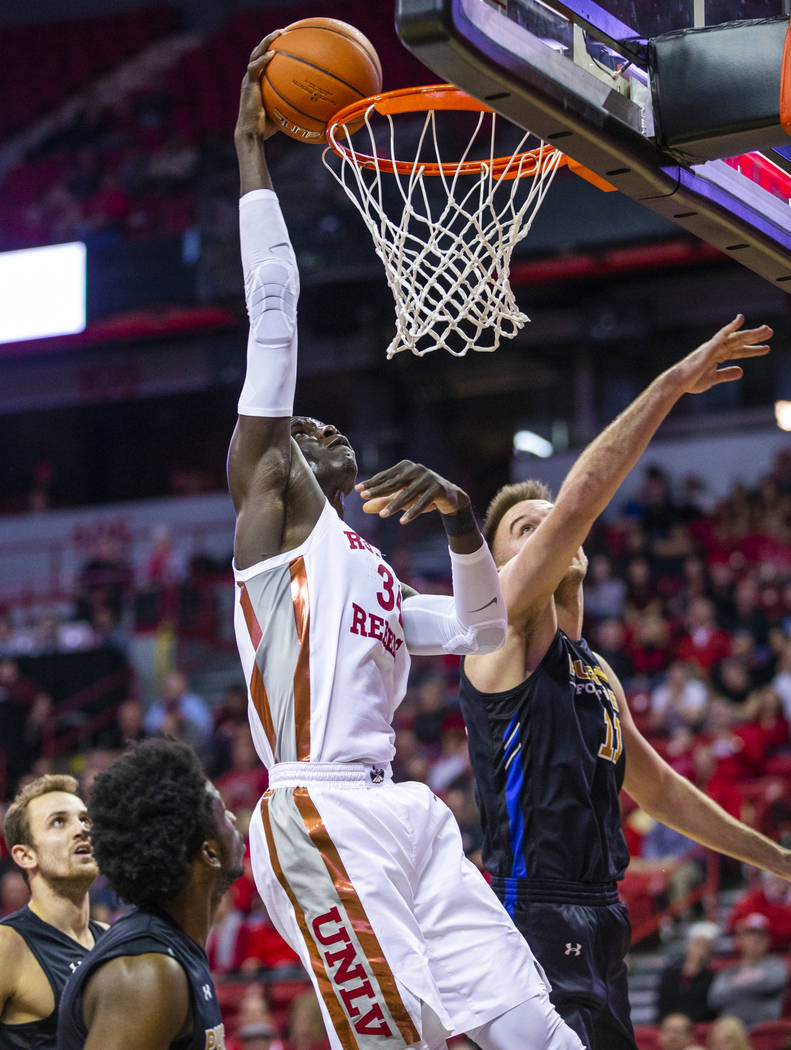 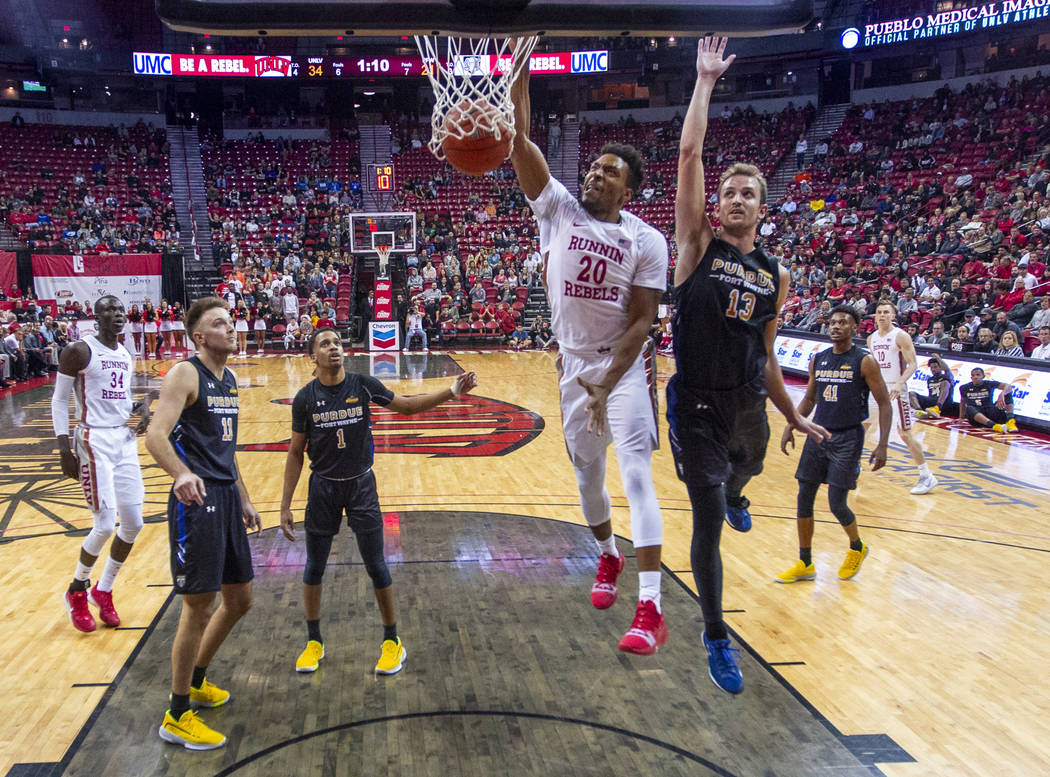 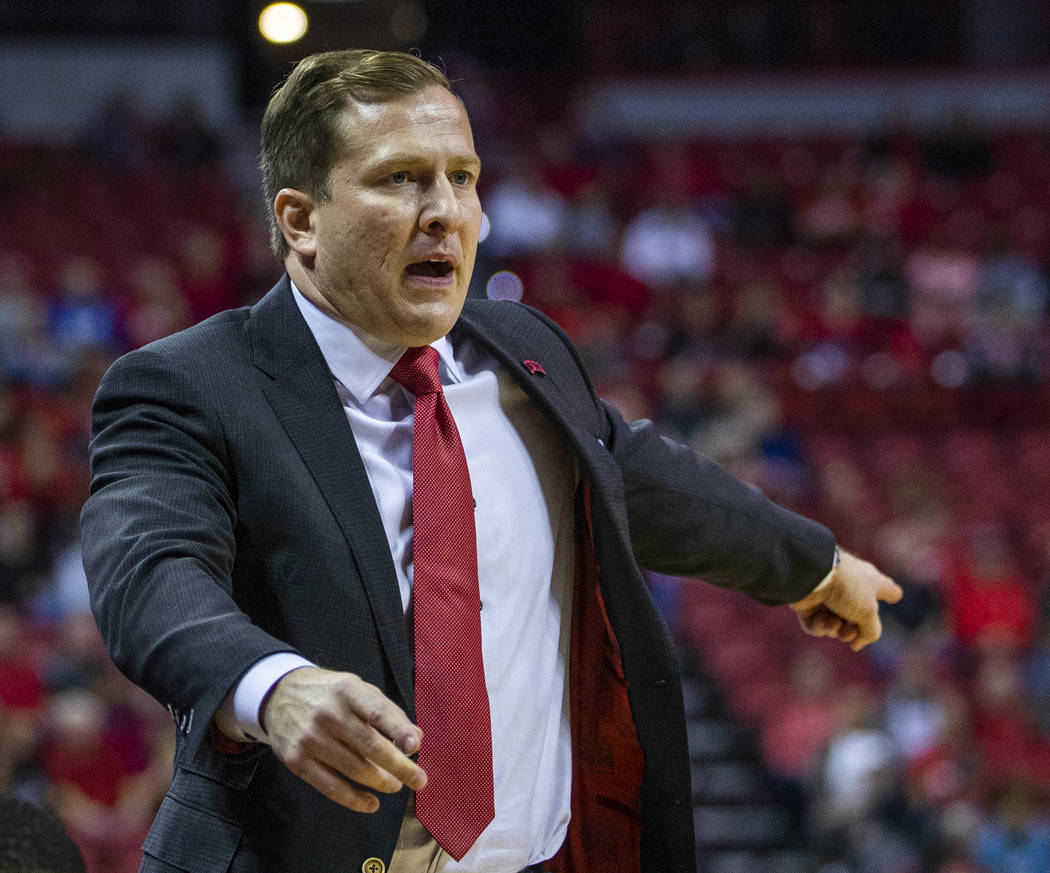 It might have been cause for concern when, near the end of a pregame message from UNLV acting president Marta Meana, her face froze on that LED widescreen scoreboard — which freezes a lot — hanging above center court at the Thomas & Mack Center.

It might have been cause for worry when the cannon that shoots free T-shirts into the stands didn’t work. It’s just not the same, having folks throw them.

Opening night in college basketball can offer various hiccups and miscues, unless you’re Boise State and beating someone named Life Pacific Insurance by 77.

As for the Rebels, they were far more good than bad in making T.J. Otzelberger’s debut a success.

The new head coach watched his team dismiss Purdue-Fort Wayne 86-71 on Tuesday night before an announced gathering of 7,728, and you can be sure 4,000 of those actually showed up.

What those who stayed away missed was an impressive first act from the Rebels with much room for improvement, which you would expect from a program attempting an entire face-lift in terms of how it has played for so long.

It was sloppy in parts and not in others but, all the while, the concepts were distinct and obvious.

“I was pleased with our guys and how they came out prepared for this game,” Otzelberger said. “There are always nerves on opening night. No matter how many dress rehearsals you have, once it’s for real, it’s real.”

UNLV shot 28-of-54, made 7-of-19 from 3, and the only midrange jumper spotted on a shot chart came from junior Jonah Antonio with just under 17 minutes remaining and his team up 14.

I would assume such a blatant disregard for Otzelberger’s system would usually get Antonio a few extra sprints in practice, but only three seconds on the shot clock remained when he dared attempt the archaic heave.

You would think Otzelberger would choose that over a violation.

Nobody is really sure.

That, and Antonio might have the best shooting stroke UNLV has known since Curtis Terry, now working on the team’s radio broadcast as an analyst.

“I mean, it’s college basketball, so there were going to be some first game jitters,” said Antonio, who scored 17 while making 5-of-9 from 3. “As the games go on, you gain more chemistry. Just play hard all the time. That’s what (Otzelberger) wants us to do — give maximum effort every time out there and it will pay off.”

The Fort Wayne part came out in Purdue enough for UNLV not to feel much stress the final 30 or so minutes, which offered plenty of time for the Rebels to work on that which will make the better.

They have two guards in Amauri Hardy and Elijah Mitrou-Long — a combined 12 assists and just four turnovers — who can share the lead spot. Both made good decisions Tuesday, not always the easiest skill when a second-half lead swells and things get loose.

UNLV, certainly not a team to win many games from the free-throw line in recent years, made 23 of 28 attempts.

No, that is not a misprint.

The Rebels were also, for the most part, solid defensively against an inferior foe, having much to do with the Mastodons shooting 6-of-22 on 3s.

The part about Fort Wayne also had something to do with it.

Minutes before the Otzelberger era tipped off, Meana’s face froze at the instant she was to say, “Lights, please,” as a way to begin introductions for UNLV’s starting lineup.

But the place still went dark and the band played and the fireworks were shot off and UNLV won a game it was expected to.

Kansas State, in its own rebuilding mode, visits Saturday.

“It feels great (to win his opener at UNLV),” Otzelberger said. “I’m humbled every day to have a position like this. I work like it’s the greatest job on earth and I believe that it is.”

With that, they’re off and Runnin’ under him, a moment frozen in time for UNLV.

In more ways than one.