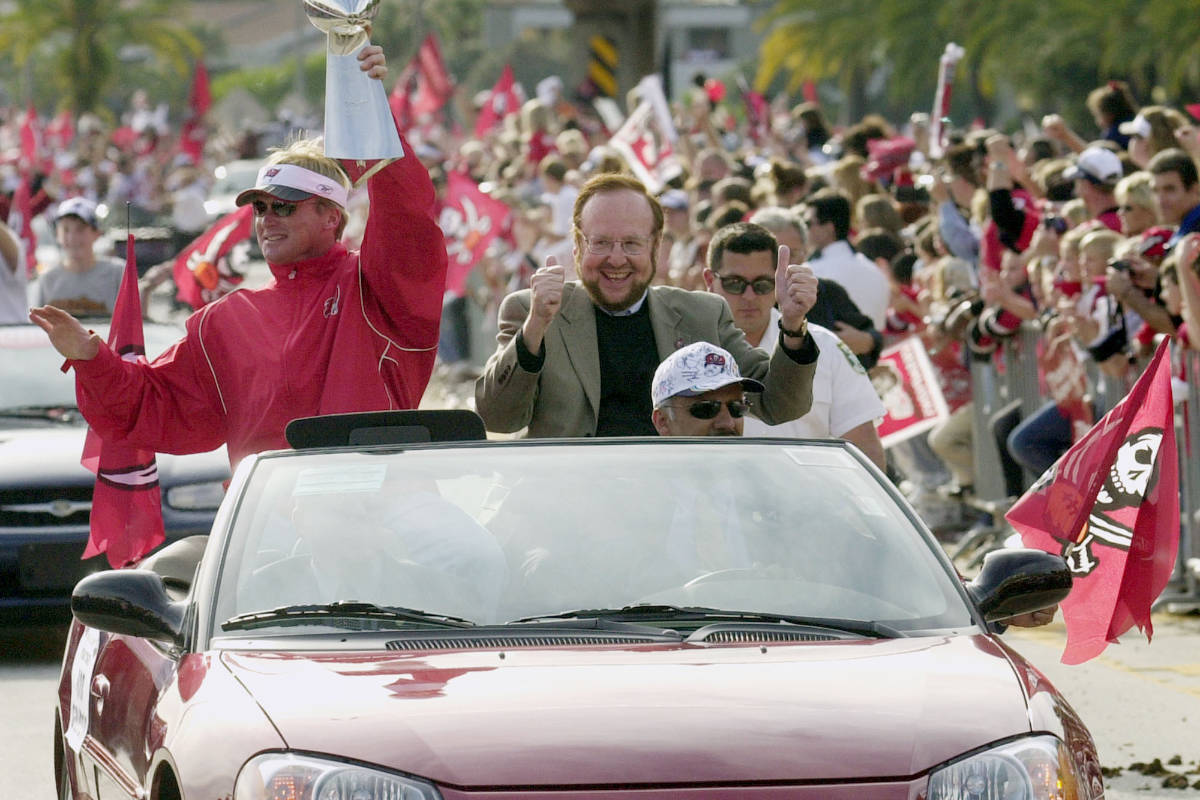 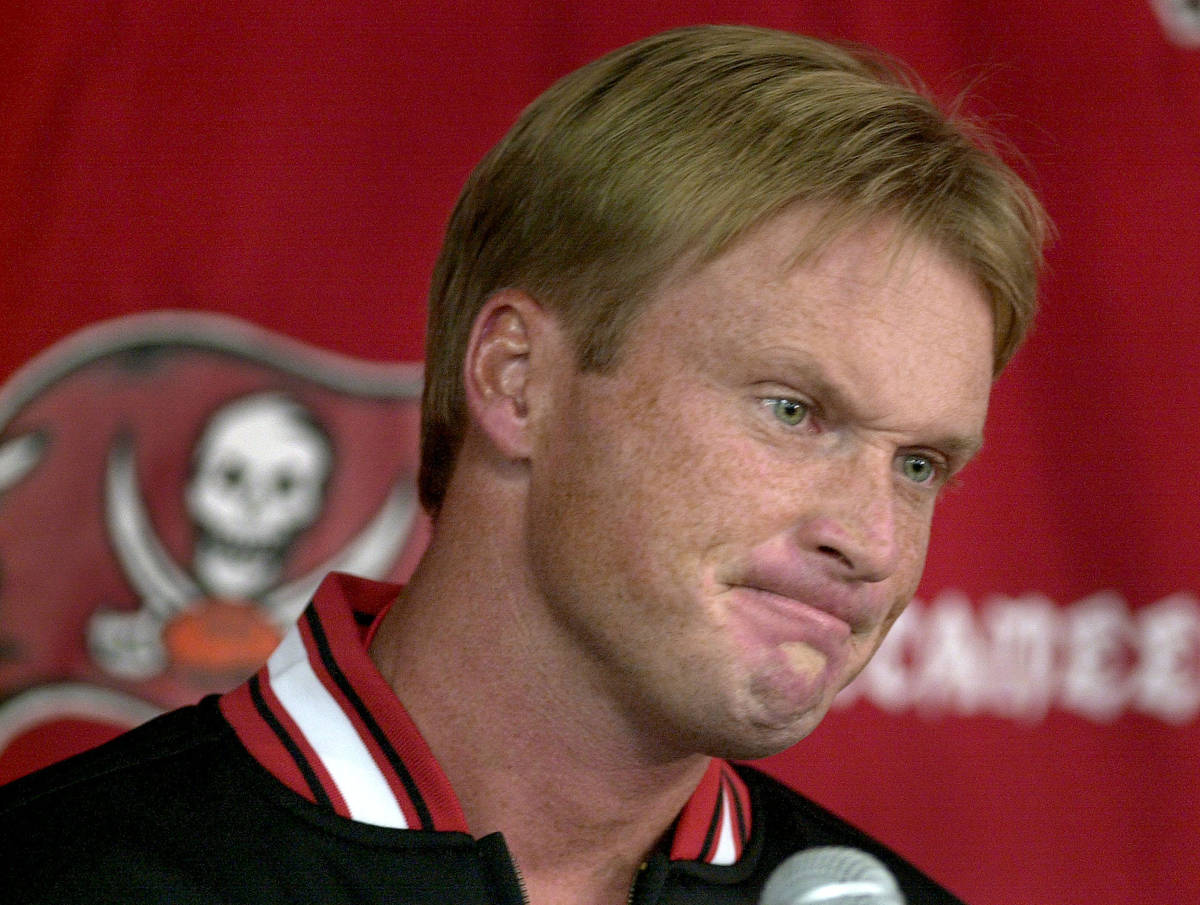 Tampa Bay Buccaneers head coach Jon Gruden frowns during his morning news conference Monday, Nov. 10, 2003, in Tampa, Fla. The Buccaneers fell to a record of 4-5 with a 27-24 loss to the Carolina Panthers on Sunday. (AP Photo/Chris O'Meara)

Tremors have shaken the National Football League throughout time.

Barry Sanders retiring in his prime.

Bob Irsay moving a team in the dead of night.

Jon Gruden being traded as a head coach.

It certainly makes the list, that moment 18 years ago this past February when the Oakland Raiders sent Gruden to Tampa Bay in exchange for draft picks and a cool $8 million. And despite the fact Gruden wouldn’t directly address the trade earlier this week, it remains one of those seminal moments that affected the future of two franchises.

It’s 2020. The Raiders are in Las Vegas, Gruden is in his third season since returning as coach and the Buccaneers will stand opposite him Sunday at Allegiant Stadium.

The condensed version of what went down: A year after reaching the AFC championship game, Oakland lost a divisional round playoff matchup to the Patriots 16-13 in overtime. It would come to be known as the “Tuck Rule Game,” in reference to a non-fumble call involving Patriots quarterback Tom Brady, who will be leading the Tampa Bay offense Sunday.

Tampa had just fired Tony Dungy as its coach. It tried to entice Bill Parcells and then Steve Spurrier and then Steve Mariucci to take the job. None did. Eventually, former owner Al Davis proposed the trade.

A month after the loss to New England, Gruden — who had a year left on his contract — was off to Tampa Bay, ending the coach’s four-year run in Oakland.

“I wasn’t involved at the time, but it was tough,” said Raiders owner Mark Davis on the decision his late father made. “Circumstances just presented themselves the way that they did.”

The immediate fallout: Gruden would coach Tampa Bay to a Super Bowl XXXVII title in his first year with the Buccaneers.

The opponent: The Raiders.

He ended up selling thousands.

“Have you ever heard of pandemonium?” asked Neil, now CEO at Fox Market Place in Weeki Wachee, Florida. “Well, that’s what it was. That’s how excited people were about it here. It was crazy.”

One group that didn’t order any dolls: Those players on the Raiders left behind.

The emotion of it really didn’t surface until the final game of the 2002 season. Oakland was understandably concerned that its Super Bowl opponent was coached by someone who knew its strengths and weaknesses as well as those of his new team.

Fears became reality when Tampa Bay remained a step or two — and sometimes 10 — ahead of the Raiders all night long in San Diego. It’s not true the Buccaneers had a spy in the Oakland locker room before kickoff and at halftime. They just had the next best thing.

“It’s hard to explain because they were the ones to beat us in the Super Bowl with our own coach,” said former Raiders lineman Lincoln Kennedy, now the team’s radio analyst. “Unfortunately, people in this day-and-age are judged by their rings. Their hardware. We didn’t have one, and Gruden did.

“I don’t hold grudges. I never talked to Gruden about the trade … I’m still a little sore about it. We lost the Super Bowl to a guy who knew us better than anyone. I wish it hadn’t come down to that, but it did.”

Oakland received first-round picks in 2002 and 2003, and second-rounders in 2002 and 2004 for Gruden. It also pocketed that $8 million. Think of it as the law of diminishing returns.

The Raiders involved their original first-round pick in a trade with multiple teams, eventually taking cornerback Phillip Buchanon at No. 17. The following year, they picked defensive end Tyler Brayton at No. 32.

Neither played more than five seasons with the Raiders. Buchanon was gone after three.

Langston Walker is a former Raiders tackle on which the team used its second-round selection in 2002. He remembers that first season, going to the Super Bowl and all, listening to those veterans who had just seen their coach traded away.

“In all honesty, the talk was more about losing the ‘Tuck Rule’ game than the trade,” Walker said. “Obviously, when I was drafted, my spot being part of that trade was brought up. There’s no connection to Gruden and I other than that. But that’s what makes sports so interesting. Little subplots to bigger stories.

“I guess it makes for a good cocktail party story to tell.”

Several coaches have been part of such tales over time, two of the more recognized being Gruden and NBA coach Doc Rivers, who was sent from the Celtics to the Clippers for a first-round pick in 2015.

The long-term fallout for the Raiders: Gruden had positioned the Raiders for a long run at success. But since that Super Bowl loss, the Raiders have gone 95-182 and made the playoffs just once.

They have also employed 10 head coaches in that span.

The last one, the current one, is again Gruden, who in 2017 was inducted in the Buccaneer Ring of Honor.

Mark Davis wanted to reunite Gruden with the franchise like nobody’s business, often visiting with him at the coach’s home in Florida before finally signing Gruden to a 10-year contract worth a reported $10 million annually in January of 2018.

“He felt as I did, that we had unfinished business to complete,” Davis said. “Jon is the one who I felt could complete this team. He never lost the passion for the game. He still loved going in and watching film. I could always tell the excitement and enthusiasm and work ethic were all still there.

“That’s why I went after him so hard.”