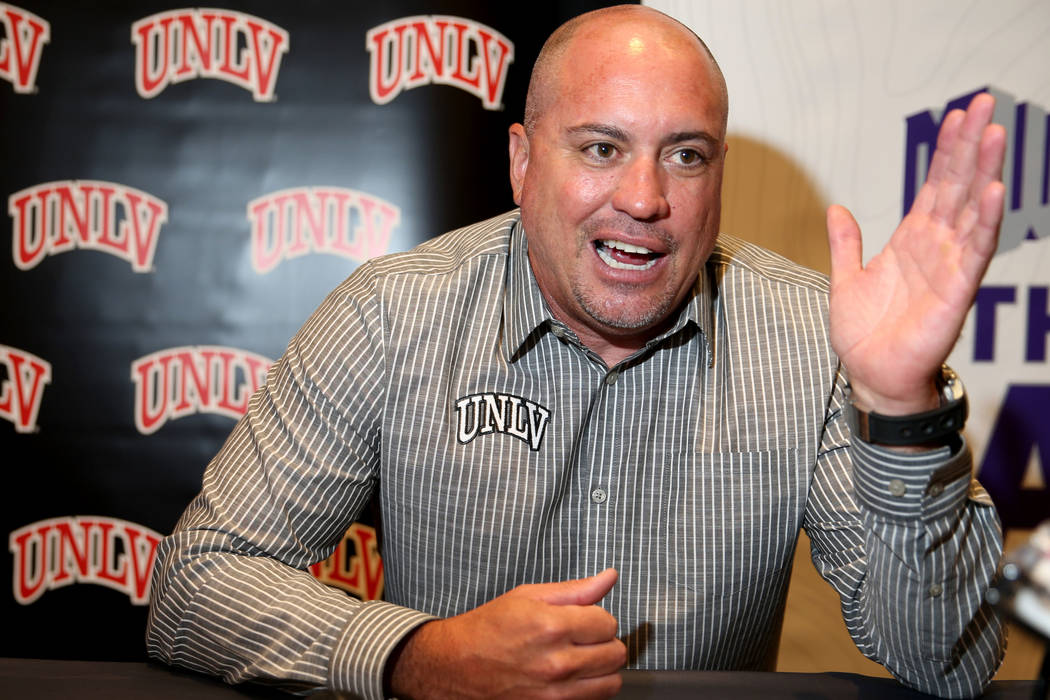 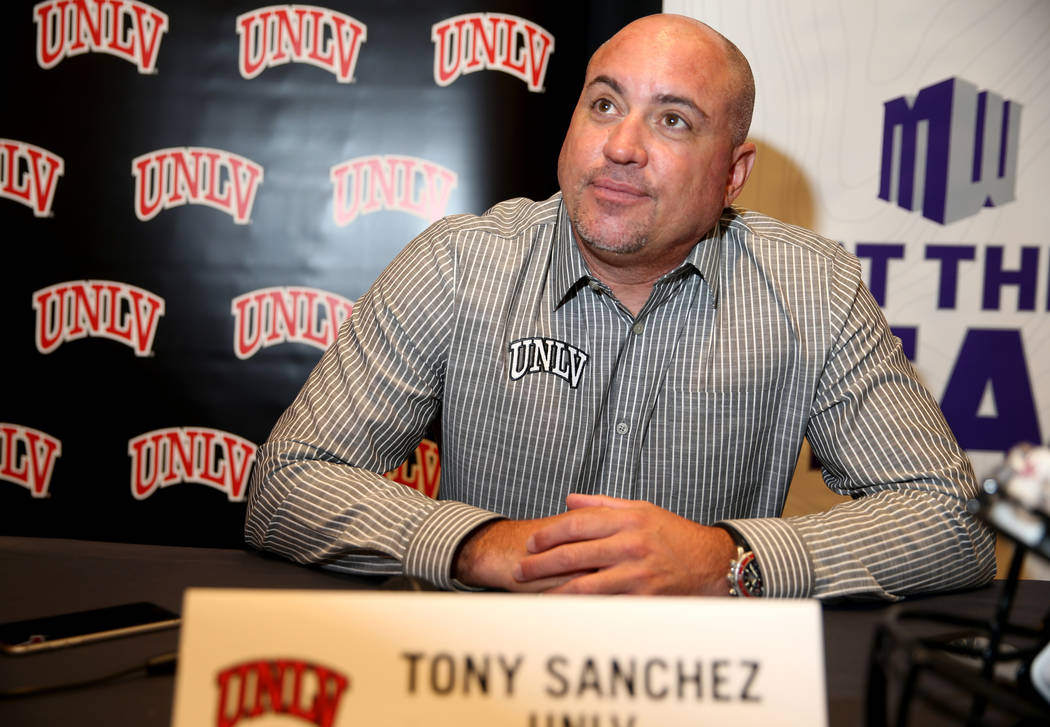 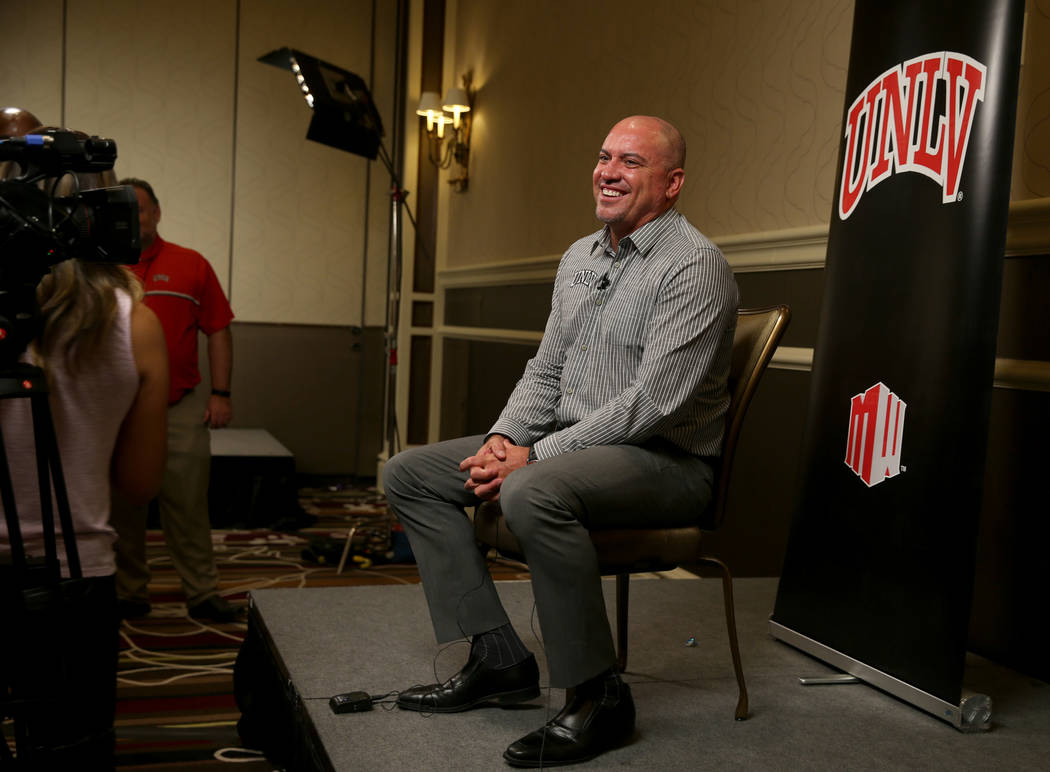 If the elephant in the room is wearing a jersey, know that it has a No. 6 on the back.

Tony Sanchez is confident his UNLV football team will reach such a number of victories this season and even believes should certain key players (see Rogers, Armani) remain healthy, the Rebels could find themselves bowl eligible by a comfortable margin.

His opinion shouldn’t come as a surprise, given Sanchez never has been one to lack for faith in his ability, preseason media polls and athletic director statements be damned.

“I’m good at what I do,” he said. “I have full conviction in what we do. I have hired a great staff, and we have good players and we work really hard.

“This program was dead on arrival when we got here. Are we where we want to be? No. But are we a better team, better program, better academics, better talent, better facilities? Absolutely. Go ask every head coach in this conference how much better we are right now than (four years ago).”

It is, like with most things UNLV football, all relative. When a program has played in one bowl game since 2001 and four in its history, comparative resumes are a difficult match.

The fact that Sanchez has won more games (16) in four seasons that his predecessor (Bobby Hauck) did in five won’t mean much if this latest version doesn’t become bowl eligible, a stated expectation (um, demand) of athletic director Desiree Reed-Francois after a 4-8 record in 2018.

The fact that Sanchez and John Robinson are the only UNLV coaches since 1981 to beat rival UNR at least twice in their tenure won’t tip the scales in favor of Sanchez if the Rebels can’t reach that significant six-win mark.

They will have to prove history and the Mountain West preseason media poll wrong to do so, a forecast that on Tuesday had UNLV finishing fifth in the six-team West Division behind Fresno State, San Diego State, UNR and Hawaii, and ahead of San Jose State.

Because if you’re not ahead of San Jose State in the fifth year of a staff, well, just drop football altogether and move on.

Tweeted one reporter: The teams to have finished fifth in the West since the league split into divisions in 2013 have gone either 3-9 or 4-8.

The eye test suggests finding enough wins is tricky, and yet one thing that gets lost in an overall record of 16-32 is that the Rebels under Sanchez have lost 12 times by eight points or fewer.

Which is really the key to all of this.

The Rebels will play a handful of either toss-up or close spread games, ones they are favored by 3 or 4 points or an underdog by as much, and it’s these that a team in the fifth season of a coach must win.

You can’t lose to Southern Utah or Arkansas State or Hawaii or San Jose State at home in your fifth season.

You need to find a way on the road against the likes of Wyoming and Colorado State.

You have to win the games that have, for the most part, gone the other way to this point.

“I think even if people are talking about (Sanchez’) future, our goal never changes, and that’s to be bowl eligible,” said Rogers, the junior and only quarterback in school history to have rushed for at least 100 yards more than three times in a career. “If doing so helps him out, we want it (even more).”

Sanchez hadn’t experienced it as a coach until last season, outside noise about his job status that for the first time suggested support from his superiors wasn’t close to unanimous. It wasn’t.

He won too much at Bishop Gorman High to worry about such things, and except for a few loony fans at Cal High, where he took a nothing program that had never won a playoff game and produced 35 wins in five seasons, the idea of looking over his shoulder hasn’t until now been part of his reality.

And still, I don’t believe he has once glanced backward.

“I haven’t spent one second worrying about any of it,” Sanchez said. “I really haven’t. It makes no difference. I never addressed our guys about it last year, and I won’t now. We know we have a good football team and what we’re capable of.

“I think that if you see my demeanor and how I act, I’m very confident, and our guys think we’re going to win a bunch of football games.”

The elephant’s jersey number is crystal clear: It must be at least six.