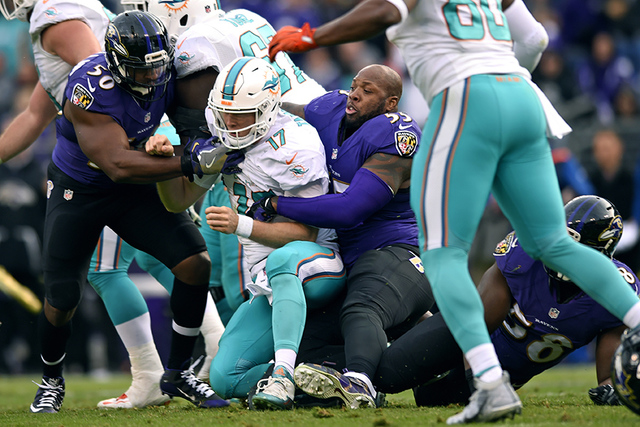 Baltimore Ravens outside linebacker Terrell Suggs (55) tackles Miami Dolphins quarterback Ryan Tannehill after his helmet fell off in the second half of an NFL football game, Sunday, Dec. 4, 2016, in Baltimore. (AP Photo/Gail Burton)

A month into his revenge tour, Tom Brady was untouchable. He was back from a suspension, full of motivation and leading the New England Patriots to one romp after another.

Four weeks, and four double-digit wins. No interceptions, and no sweat. The Patriots were being projected as 7-point Super Bowl favorites over an opponent to be determined.

But the NFL is a riddle wrapped in a mystery inside an enigmatic world. Everything can change in a week, if not a day. An injury or a loss — or a combination of the two — shifts public perception. Suddenly, New England no longer appears invincible.

After a setback at home against Seattle, and a season-ending injury to tight end Rob Gronkowski, the Patriots are vulnerable in December as several other serious contenders are surging in the AFC.

The Kansas City Chiefs, 20-3 in their past 23 regular-season games, are a threat to the Patriots. So is Oakland, Denver and Pittsburgh. And the Baltimore Ravens remain in the hunt, too, setting up a high-stakes showdown Monday night.

Joe Flacco and the Ravens (7-5) are 7-point road underdogs to Brady and the Patriots (10-2) in a game with postseason implications. Fortunately for Baltimore, it’s not simply Flacco against Brady.

The Ravens, who have won and covered four of their past five, rank No. 1 in the league in total defense and are tied with the Patriots for No. 2 in scoring defense (17.3 points per game).

Brady has 19 touchdown passes and one interception in his eight games this season, but he has faced only two top-10 defenses. Plus, he’s without Gronkowski now.

Baltimore and New England meet Monday for the 10th time in 10 years, including four times in the playoffs in the past seven seasons. The familiarity of the rivalry should help the Ravens, who have played the Patriots tougher than most teams.

Flacco tends to sleepwalk through some games, but he’ll be fired up for this one, and he’ll get help from his defense. I’ll take the points and expect the underdog to put up a good fight.

■ PANTHERS (-1) over Chargers: Both teams are out of it, but at least Carolina has the advantage of playing at home. Cam Newton and the Panthers should be slightly more motivated after getting embarrassed at Seattle. Philip Rivers is in his strongest role as a road ’dog, but Rivers has been sloppy lately, throwing seven interceptions in his past three games. Carolina’s defense will get a boost with linebacker Luke Kuechly expected to return.

■ Redskins (-2) over EAGLES: Philadelphia has dropped five of its past six, and the flaws of rookie quarterback Carson Wentz and first-year coach Doug Pederson have been exposed. Washington (6-5-1) still has a shot at the postseason. The Redskins are on the road for the third straight week, but I like this spot because they lost the past two. Kirk Cousins is more capable of putting points on the board than Wentz.

■ PACKERS (+3) over Seahawks: Aaron Rodgers has not lost a December home start since 2008. Aside from that fact, this is a must-win situation for Green Bay, and the cold, snowy forecast should favor the Packers. Seattle’s defense was weakened by the loss of safety Earl Thomas.

■ GIANTS (+3½) over Cowboys: New York dealt Dallas its only loss, 20-19 in Week 1, so the revenge angle is in play. Still, the Giants are 5-1 at home this season, and they will come to play. Expect the Giants to expand their offense as Eli Manning airs it out against a Cowboys defense that ranks 29th against the pass.