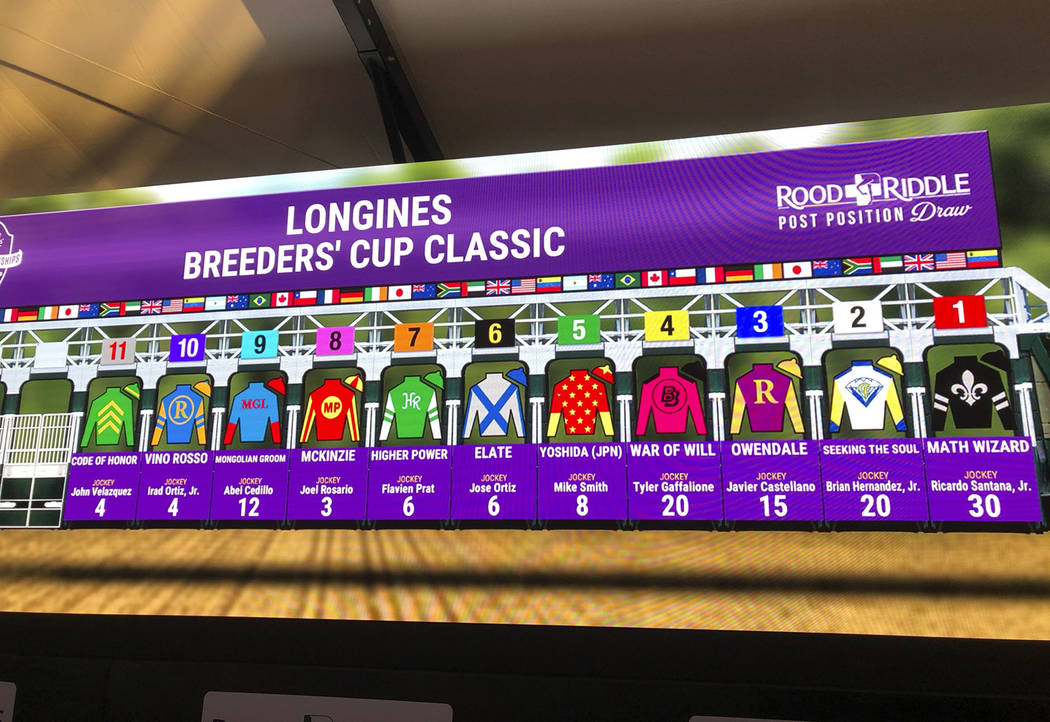 The field for the $6 million Breeders' Cup Classic at Santa Anita Park is displayed on a video board Monday, Oct. 28, 2019, at the track in Arcadia, Calif., in advance of the Breeders' Cup series of horse races this coming weekend. (AP Photo/Beth Harris) 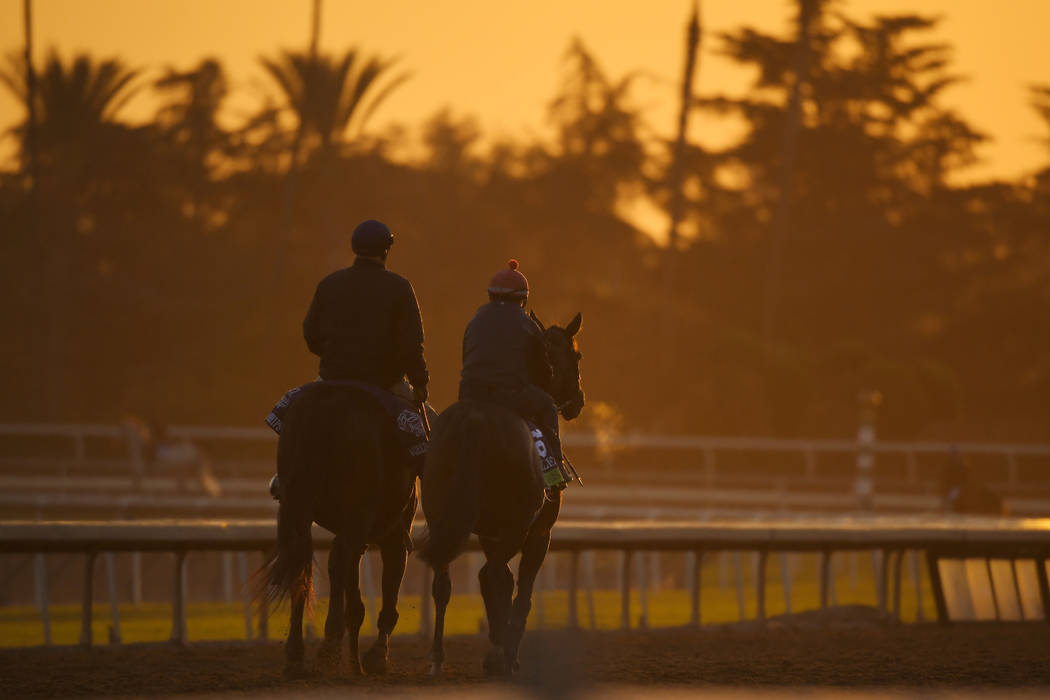 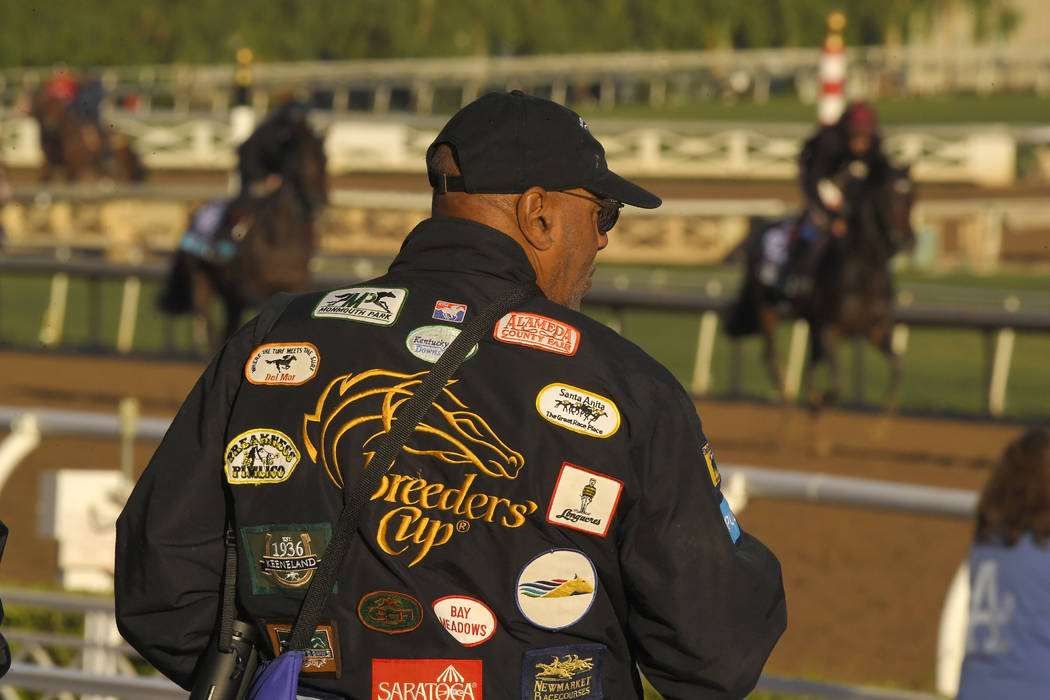 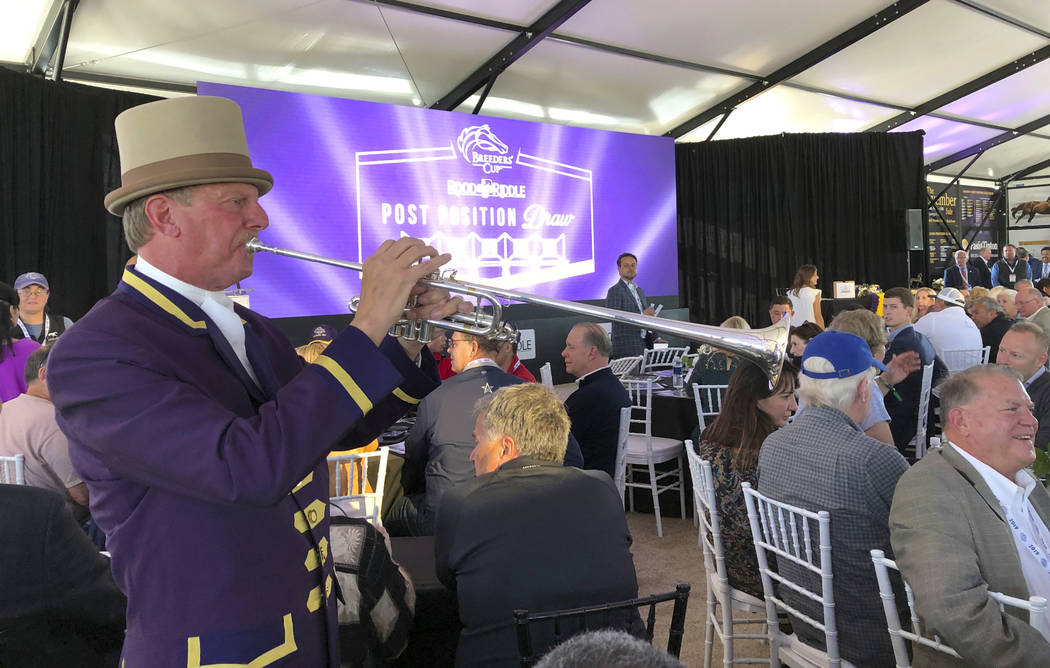 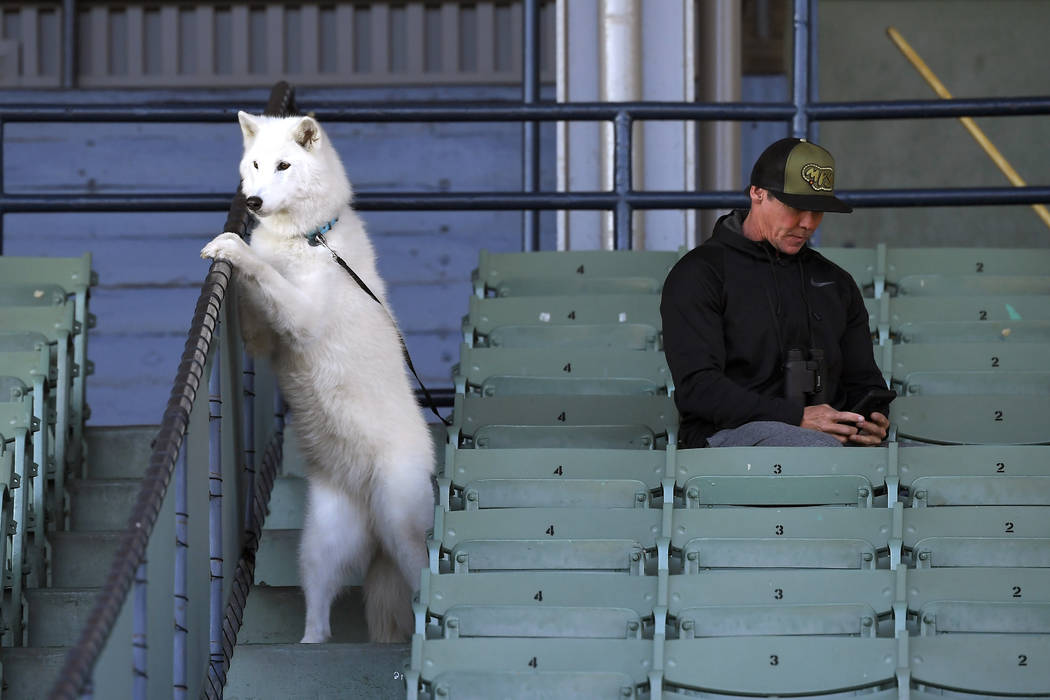 A dog and his owner sit in the stands during morning works out at Santa Anita Park for the Breeders' Cup horse races, Thursday, Oct. 31, 2019, in Arcadia, Calif. (AP Photo/Mark J. Terrill)

Christmas comes early for horseplayers, and Friday is the day we get to tear into a big box of surprises known as the Breeders’ Cup.

The 14 races to be run over the next two days at Santa Anita Park promise plenty of drama, with great individual matchups and end-of-year honors on the line. But there’s also an underlying tension to this celebration of the breed, arising from the surge of horse deaths this year at the California racetrack known as the “Great Race Place.”

I’ll be covering the races on both days and will share my observations on the racing and overall atmosphere, as well as my opinions and those of the #RJhorseracing handicapping crew.

— The five-furlong Juvenile Turf Sprint offers an intriguing mix of European and U.S.-based runners, with trainer Wesley Ward’s duo of Kimari (7-2) and Four Wheel Drive (3-1) getting a lot of attention. I like them both, but also will take long looks at the filly Band Practice (12-1), who looks quick for a Euro runner, seems likely to relish the firmer ground and is well drawn in post 2, and A’Ali (6-1), a three-time Group 2 stakes winner in Europe to be ridden by the Lanfranco Dettori.

— In the one-mile Juvenile Turf, 5-2 favorite Arizona probably is the best horse in the field, but his 12 post is no bargain at the distance. Structor (5-1) seems the one to give him a tussle, but I’d toss Our Country (15-1) and Peace Achieved (10-1) into the mix.

— In the 1 1/16th-mile Juvenile Fillies on the main track, rail horse Donna Veloce (3-1), who has never run around two turns, probably will lead them to the stretch, but I expect the more experienced runners to wear her down. The three co-second favorites at 7-2 – Bast, British Idiom and Wicked Whisper — seem most likely to take over late.

— The one-mile Juvenile Fillies Turf looks like easy pickings for the Europeans, with Daayeh (5-1) and Albigna (9-2) most likely to pose for the photographer. If you’re looking for a bigger payoff consider Croughhavouke (20-1), who began her career in Europe but now has two U.S. races for trainer Jeff Mullins.

— In the 1 1/16th-mile Juvenile, which will produce the early favorite for the 2020 Kentucky Derby, I think Bob Baffert’s Eight Rings (2-1) can overhaul 8-5 favorite and big buzz horse Dennis’ Moment. My long shot play in the race is Anneau d’Or (15-1), who demolished a maiden special weight field on the turf at Golden Gate and should have no problem with the dirt. He’s likely the strongest closer and will benefit if the top two mix it up.

One more thought before we turn to this week’s #RJhorseracing featured races: Remember when you’re handicapping the dirt races that the main track at Santa Anita is playing much slower than it was before a major renovation this summer aimed at creating the safest racing surface possible. So don’t be fooled when you see times from late in the winter-spring meet or this meet that appear snail-like compared to previous years.

While the #RJhorseracing handicappers are sharing their opinions on all the Breeders’ Cup races, they’re focused for contest purposes on two of the toughest races on Saturday’s card: the Breeders’ Cup Mile and the Classic.

In the former, run at a mile on the turf, the crowd ’cappers are siding with co-second choice Uni (7-2), who broke the course record in her last race at Keeneland and has won six of her last seven for trainer Chad Brown. They see morning line favorite Circus Maximus (3-1) edging Got Stormy (7-2) for the place.

I agree that Uni is the horse to beat, but in what appears to be a fairly paceless race, I’m going with Got Stormy, who handed Uni her only defeat two races back. I’ll use Uni underneath and the European-based colt Hey Gaman (12-1) to show.

In the Classic, the handicapping crew is on board with 3-1 morning line favorite McKinzie, apparently figuring that Hall of Fame trainer Bob Baffert will figure out a way to get the big money at his home track. They see Code of Honor (4-1) and Vino Rosso (4-1) filling out the trifecta.

McKinzie has too many questions surrounding him to get my money. I’ll go with Vino Rosso, Elate and McKinzie in that order.