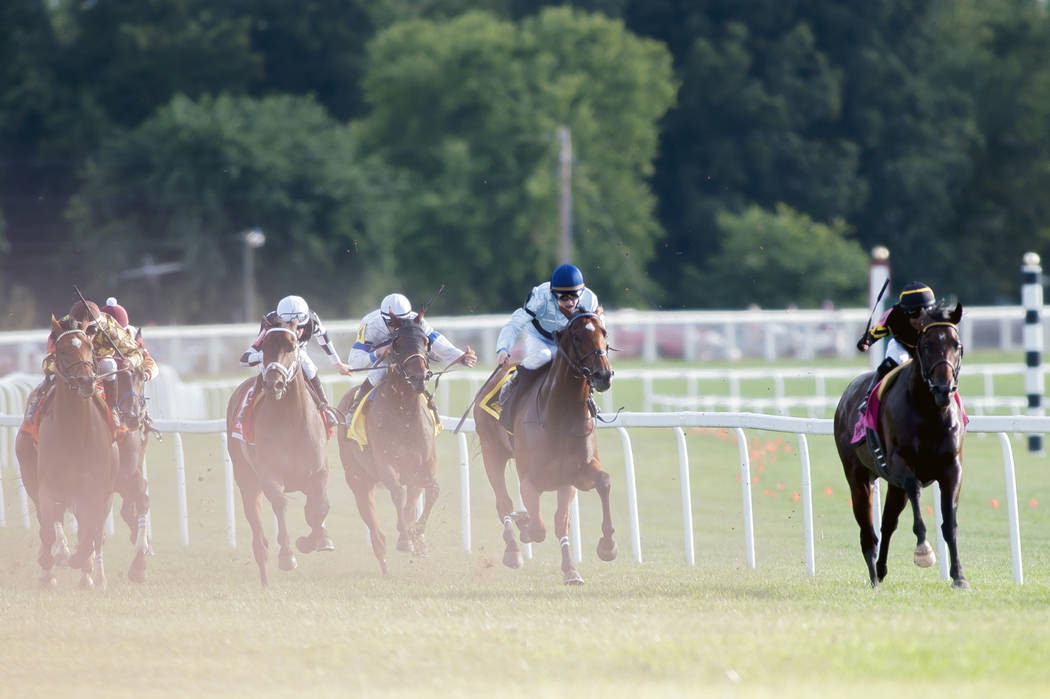 Horseplayers are going to be walking with a bit less spring in their steps with Saratoga and Del Mar closing their doors on Labor Day, but two other horse racing success stories are stepping into the spotlight to lift our spirits.

I refer to Kentucky Downs, the quirky but wonderful undulating European-style turf track in southern Kentucky, which opens its blink-and-you’ll-miss-it live race meeting Saturday, and the revived Colonial Downs, which hosts its signature Virginia Derby the same day.

Kentucky Downs has developed a model that I think may become a blueprint for the sport, particularly if the national shortage of racehorses continues to worsen. It manages to attract top barns and horses for its five-day live race meeting thanks to generous purses fueled by winnings from historical racing machines — similar to slot machines but based on horse races – and year-round simulcasting.

The unique layout of the Kentucky Downs track, which is shaped something like an elongated carabiner and includes uphill and downhill sections, makes it an interesting handicapping challenge.

My advice is to focus more on fitness and current form than past exploits and prefer horses who have run well over the track. Also, don’t throw out horses from Ellis Park, which hosts several feeder races for the Kentucky Downs meeting, or other smaller Midwestern tracks if the horses are in good form. Finally, give a long look to any horse sent out by trainer Mike Maker, especially if Tyler Gafflione is in the irons, as they combined to win numerous races at the track last year.

The return of Colonial Downs after a six-year hiatus offers another sort of good news. The track in New Kent was shuttered in 2013 amid a bitter dispute between owner Jacobs Entertainment and the Virginia Equine Alliance.

But the approval last year of historical racing machines for the venue and the sale of the track to Chicago-based Revolutionary Racing cleared the way for its reopening Aug. 8 and returned live racing to a state with a rich history of thoroughbred breeding and racing — anyone remember a chestnut named Secretariat?

Saturday is a particularly noteworthy milestone in the rebirth, as two of the track’s signature races — the Virginia Oaks and Virginia Derby — return to the track after being repatriated by Laurel Park in Maryland. The Derby, known as the Commonwealth Derby when it was run in Maryland, has been won by some of the most important American turf horses of recent decades, including Kitten’s Joy, English Channel and Paddy O’Prado.

The #RJhorseracing handicapping crew will attempt to get over the loss of Del Mar and Saratoga by focusing on marquee races from Kentucky Downs and Colonial Downs: the $750,000 Tourist Mile at the former and the $250,000 Virginia Derby.

In the former, the crowd ’cappers are forecasting a wide-open betting race but narrowly coming down on the side of Hembree, the second choice on the morning line at 4-1. They have Snapper Sinclair (8-1) and Next Shares (the 7-2 morning line favorite) filling out the minor placings.

I’m also skeptical of Next Shares, even though he has a win at Kentucky Downs and is trained by the always dangerous Richard Baltas. But the 6-year-old hasn’t been his old self in three starts this year and also enters off a nearly three-month layoff. I’ll also use Hembree on top, with Majestic Eagle (10-1) to place and Snapper Sinclair to show.

In the Virginia Derby, the crew is also taking a stand against 5-2 morning line chalk English Bee in favor of second choice Tracksmith (3-1). The have Jais’s Solitude (8-1) and Credit Swap (4-1) rounding out the top three.

We have another meeting of the minds, as I also like Tracksmith, making his third start off a layoff for trainer Joe Sharp. I’ll use English Bee and Jais’s Solitude in second and third.