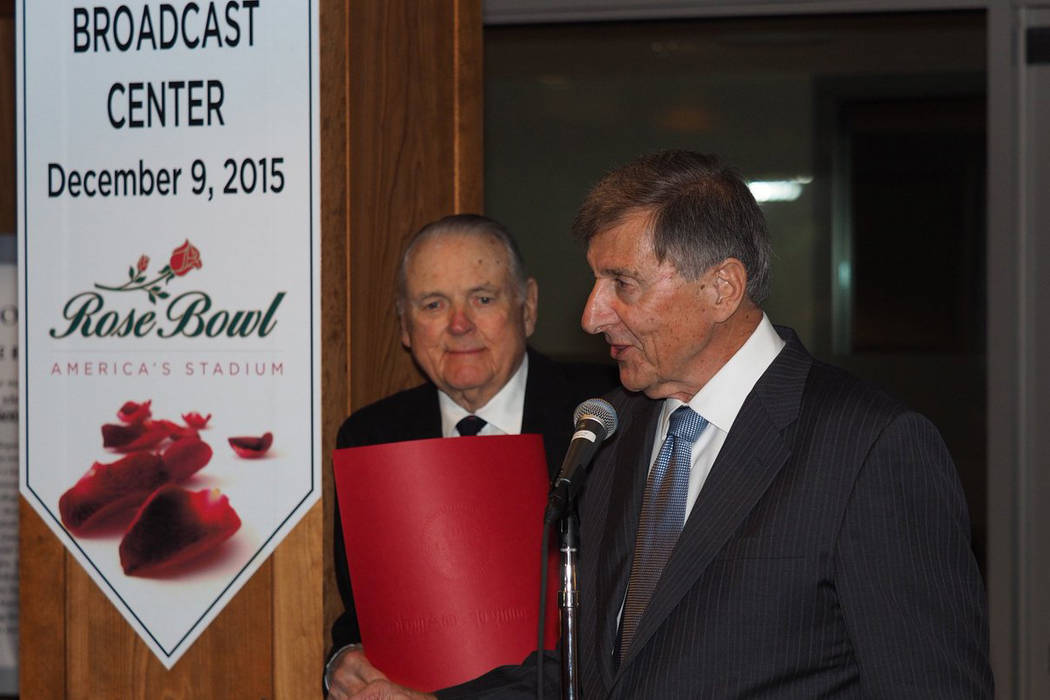 It is a small tribute, in a pantheon of tributes of all sizes.

The backdrop of Harvey Hyde’s Twitter account is a photo of the former UNLV football coach chatting about “big uglies” and other football-related things with legendary broadcaster Keith Jackson, who died Jan. 12 at age 89. The two had become friends about 10 years ago, due in large part to their mutual attachment to the Rose Bowl and its home ground of Pasadena, California.

Jackson called his final game at the 2006 Rose Bowl, the unforgettable one in which Vince Young led Texas to a 41-38 victory over Southern California. Some said it was the greatest college football game ever played. Everybody said having Keith Jackson in the booth that night made it even greater.

That very broadcast booth in 2015 was renamed the Keith Jackson Broadcast Center. Hyde chaired the committee that made it happen, thanks in no small part to the generosity of country singing star Kenny Chesney, another big fan of Jackson’s.

Hyde, who was head football coach at Pasadena City College before landing star quarterback Randall Cunningham and the UNLV job, said the ever humble Jackson initially was dismissive of the idea.

“I said, ‘We’re going to do this,’ and he said, ‘No way in hell,’ ” the ol’ Rebels ball coach said about renaming the Rose Bowl’s TV and radio booths in Jackson’s honor.

A bunch of famous football people that included Peyton Manning wrote checks, Hyde said. “But Kenny Chesney, he went out of his mind.”

Harvey Hyde interviewed Keith Jackson at the Quarterback Club in Pasadena on Oct. 20 in what evolved into a career retrospective reminiscent of the old “This Is Your Life” TV show.

Nobody knew then, but it was to be Keith Jackson’s final public appearance.

A notice in the San Gabriel Tribune said the cost for the lunch buffet was $25 for members, $30 for guests, and that doors would open at 11 a.m.

Goodbye to a legend and my friend, Keith Jackson. pic.twitter.com/hQNM64W9Xt

Rest In Peace to the soundtrack of college football, the legendary Keith Jackson. Your folksy sayings and inspiring voice will forever have a special place at the #RoseBowl! ❤️🏈#KeithJackson #WhoaNellie pic.twitter.com/n4AkJ3XR2p

Keith Jackson is an icon. One of my favorite interviews I’ve ever listened to was Keith with @CoachHarveyHyde last year before Rose Bowl. Never got to meet him. Always admired him. And the people that knew him say nothing but the best. RIP 🌹

— Former slugger Bob Bailey, often referred to as baseball’s “Last Bonus Baby” for having signed with the Pittsburgh Pirates for $175,000 in 1961, died in Las Vegas on Jan. 9 from complications due to pneumonia. He was 75.

Bailey is No. 7 on the Washington Nationals’ career home run list (one slot behind Bryce Harper) despite never having played for them, thanks to the many long balls he hit for the Montreal Expos during the early 1970s long before they relocated to D.C. He spent much of his baseball retirement in Las Vegas. I heard from a couple of his golf pals who shared baseball anecdotes about The Beetle.

My favorite: When he was with the Reds, Bailey hit a three-run homer, and after being replaced, he left the ballpark and returned to the team hotel, which players were wont to do in his day. He waited for his Cincinnati teammates at the hotel bar and told the bartender he had hit a homer in the game they were watching on TV.

The bartender scoffed and told Bob Bailey he needed another drink.

RIP to Bob Bailey, a 17-year MLB veteran who played on 5 teams, one team was expansion Montreal Expos. Here Bailey (#3) is congratulating Mack Jones on a grand slam in very historic game, the first MLB game outside USA and in Canada as Expos beat Cardinals 8-7 on April 14, 1969 pic.twitter.com/GcpIDKHz0s

— On Tuesday, before the College of Southern Nevada baseball practice, a familiar beard was spotted playing long toss with Coyotes assistant coach Dan Jaffe in right field. Former Silverado High, CSN, Central Florida and 51s pitcher Chasen Bradford said he was looking forward to reporting to Port St. Lucie, Florida, for spring training with the Mets after appearing in 28 games for them last season.

On Thursday, Bradford was cut.

On Friday, he signed with Seattle.

Bradford said on Twitter he was looking forward to reporting to Peoria, Arizona, for spring training with the Mariners.

Sad to say goodbye to the @Mets fans and my teammates but excited to see what the future holds with the @Mariners and excited to get to work.

— Tom Cable’s return to the Raiders as offensive line coach serves to remind that former UNLV football coach Jim Strong sure knew how to surround himself with quality assistant coaches.

It also serves to remind that success is more about good players than it is good coaches — the Rebels’ record in four seasons under Jim Strong was 17-27.