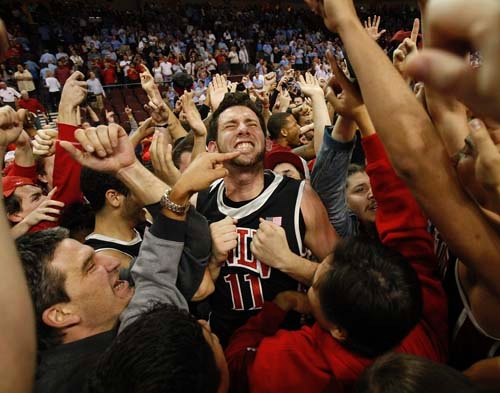 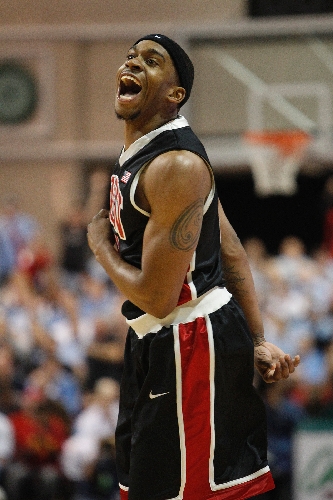 A few hours after the storming of the court, calm set in for UNLV coach Dave Rice. He hit the couch and watched game tape.

“My deal is, unless we play really poorly, then I will get home and watch a few clips of our next opponent,” he said.

Rice spent no time reviewing video of the Rebels’ 90-80 upset of top-ranked North Carolina on Saturday night in the Las Vegas Invitational championship at Orleans Arena. Sometime after midnight, he moved on to UC Santa Barbara.

The Rebels (7-0) will be catapulted somewhere into the top 25 when the rankings are released today, but their next test arrives quickly with a game at UC Santa Barbara (4-1) on Wednesday.

There is no shortage of examples of teams stunning No. 1, then falling flat against a lesser opponent the next time out.

“It’s a situation that will not be a letdown,” Rice said. “I don’t anticipate it being an issue. We have a group of seniors who are experienced and mature and have played a lot of basketball, and they understand moving from game to game. So the Gauchos will have our full attention.”

“I really meant what I said (Saturday) night that I don’t want our season to be defined by one game,” Rice said. “We want to be judged by our consistency over the nonconference season, over our conference season and over the course of the year.

“But I also do recognize that we do need to have some signature wins. It is a huge win for us.”

Two seniors, forward Chace Stanback and guard Oscar Bellfield, worked as bookends in the effort to take down North Carolina. Bellfield made two 3-pointers in the first four minutes and scored 13 of his 16 points in the first half. He also had nine assists. Stanback poured in 21 of his career-high 28 points in the second half, and he finished with 10 rebounds to bounce back from a weak showing in Friday’s semifinal victory over Southern California.

“Oscar’s start gave us confidence, with how aggressive he was coming out,” Rice said. “It was a huge game for Chace. But as impressive as 28 points was, I was even more impressed by his rebounding.”

Sophomore forward Mike Moser had 16 points and 18 rebounds, and he scored seven points during the Rebels’ 14-0 run to open the second half that turned a four-point deficit into a 52-42 lead.

“We’ve been a really good second-half team, and I think a lot of that has to do with our depth and conditioning,” Rice said. “We’re playing nine guys for significant minutes, and I feel like we have enough guys that we’re going to be competitive in every game.”

Rice credited assistant coach Justin Hutson for a defensive game plan that put North Carolina’s stars on their heels. The front line of Harrison Barnes, John Henson and Tyler Zeller combined for 31 points, well below their previous five-game average of 49.8, and all three were defended physically and pushed away from the rim.

On the offensive end, UNLV relied a lot on 3-pointers and made 13 of 32 attempts. But Bellfield and Anthony Marshall did break down the defense on drives, and they had little trouble with the Tar Heels’ Kendall Marshall, one of the nation’s elite point guards.

“I think we just took what the defense gave us. Carolina is so big and athletic, and they do a great job of protecting the basket,” Rice said. “We felt like dribble penetration and jump shots would be more effective for us.”

Every NBA team was represented with scouts at Orleans Arena, and they were there to see North Carolina. But UNLV’s victory, televised nationally on ESPN2, attracted plenty of attention.

Rice’s cell phone was filled with voicemails and text messages, including one from former Rebels coach Lon Kruger, who was in Anaheim, Calif., over the weekend with his Oklahoma team.

“Coach Kruger and I stay in touch, either through texts or talking on the phone,” Rice said. “People seem very excited for our program and our staff. It’s great to be able to share that kind of experience with people. I’m really happy for our players.”

Fifteen minutes after the game, Moser and Stanback were talking about UCSB.

“We have to keep working,” Stanback said. “We know it doesn’t stop here.”