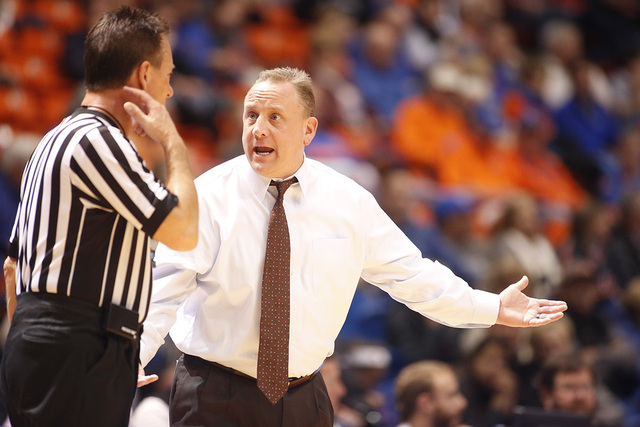 San Jose State coach Dave Wojcik said he knew his first three seasons would be rough as the Spartans made the transition from the Western Athletic Conference.

He also was committed to building the program through freshmen, and was prepared to accept the losses that would come with that approach.

And they came — a combined 74 of them with only 18 victories. San Jose State also went 5-49 in the Mountain West.

But as Wojcik enters this season, his expectations are considerably higher than that of the media, which picked the Spartans to finish last in the Mountain West.

“I could care less about that stuff because at the end of the day, you all have no idea about my team, the pulse of my team or the heart of my team,” Wojcik said. “I don’t talk to my guys about it. We just worry about getting better and worry about our opening game on Nov. 12 (against West Coast Baptist) and move on from there.

“Obviously, we want to win the league. That will always be a goal. I don’t ever want (the players) to think we’re selling ourselves short. We talk about that, and we talk about postseason. I keep it very simple for them. I think they have so many distractions and so many things going on in their world today, I don’t need to bog them down with more stuff.”

Wojcik has reason for optimism. San Jose State went 9-22 last season, including 4-14 in the conference. That was a seven-victory overall improvement from the previous year . The Spartans also had just one conference victory in the two prior seasons combined.

San Jose State committed to bolstering the backcourt in recruiting, with four of its five new players being guards.

“That’s going to help us, no doubt, because I think our strength is going to be our threes, fours and fives,” Wojcik said, referring to the frontcourt. “How quickly (the guards) grow is going to be a big factor, but from right now in the first two weeks of practice, I’m liking what I’m seeing.”