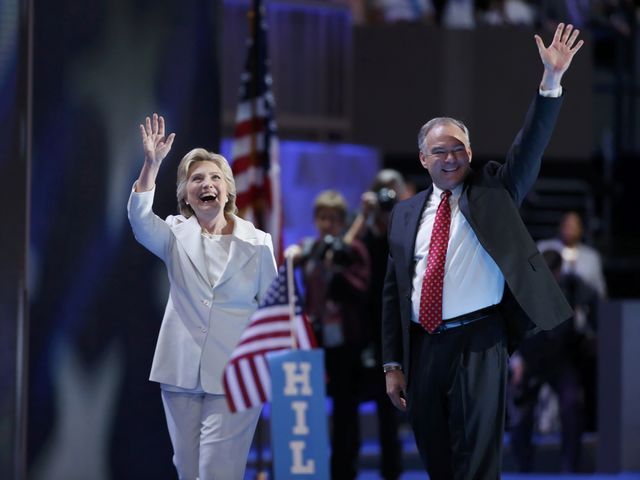 Hillary Clinton waves with her vice-presidential running mate, U.S. Sen. Tim Kaine, after accepting the nomination on the fourth and final night at the Democratic National Convention in Philadelphia, July 28, 2016. (Lucy Nicholson/Reuters)

The latest attack, which was disclosed to Reuters on Friday, follows reports of two other hacks on the Democratic National Committee and the party’s fundraising committee for candidates for the U.S. House of Representatives.

The involvement of the Justice Department’s national security division is a sign that the Obama administration has concluded that the hacking was state sponsored, individuals with knowledge of the investigation said.

The Clinton campaign, based in Brooklyn, had no immediate comment and referred Reuters to a comment from earlier this week by campaign senior policy adviser Jake Sullivan criticizing Republican presidential candidate Donald Trump and calling the hacking “a national security issue.”

It was not immediately clear what information on the Clinton campaign’s computer system hackers would have been able to access.

HACKERS GET INTO DCCC NETWORK

Hackers, whom U.S. intelligence officials have concluded were Russian, gained access to the entire network of the fundraising Democratic Congressional Campaign Committee, of DCCC, said people familiar with the matter, detailing the extent of the breach to Reuters for the first time.

Access to the full DCCC network would have given the hackers access to everything from emails to strategy memos and opposition research prepared to support Democratic candidates in campaigns for the House.

The hack of the DCCC, which is based in Washington, was reported first by Reuters on Thursday, ahead of Clinton’s speech in Philadelphia accepting the Democratic party’s nomination. Russian officials could not be immediately reached for comment.

The DCCC said in a statement early on Friday that it has hired cyber security firm CrowdStrike to investigate.

“We have taken and are continuing to take steps to enhance the security of our network,” the DCCC said. “We are cooperating with federal law enforcement with respect to their ongoing investigation.”