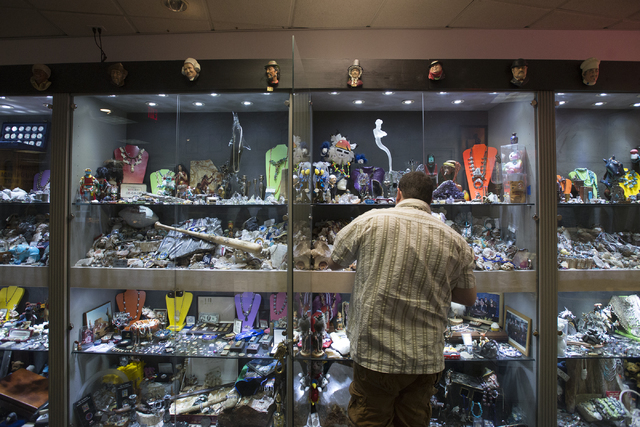 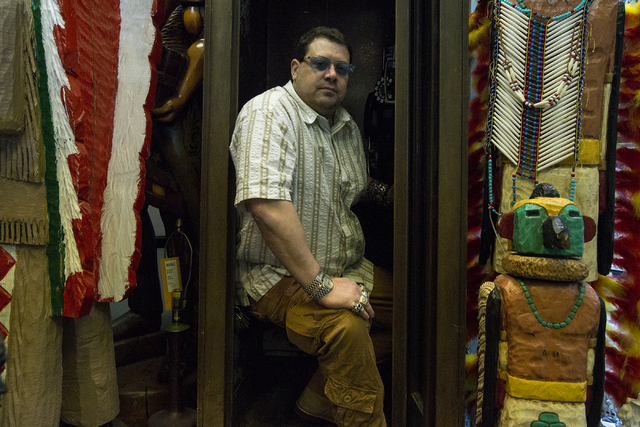 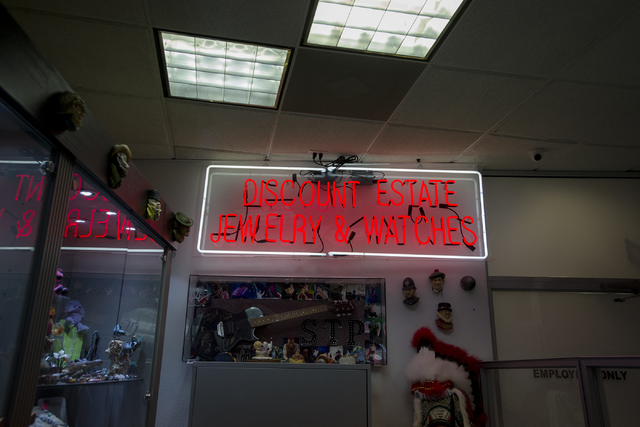 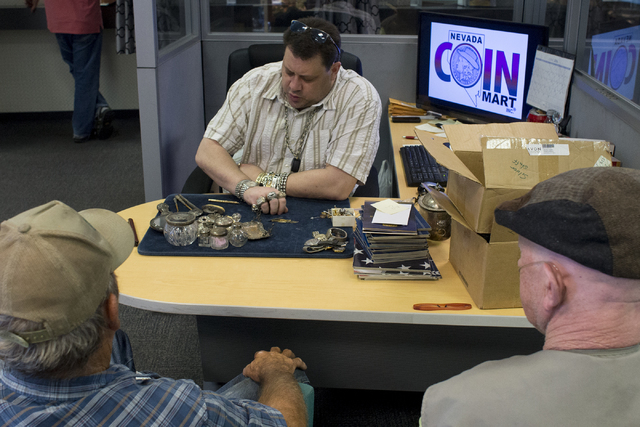 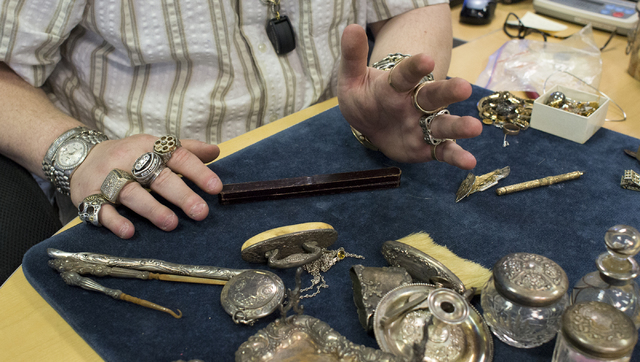 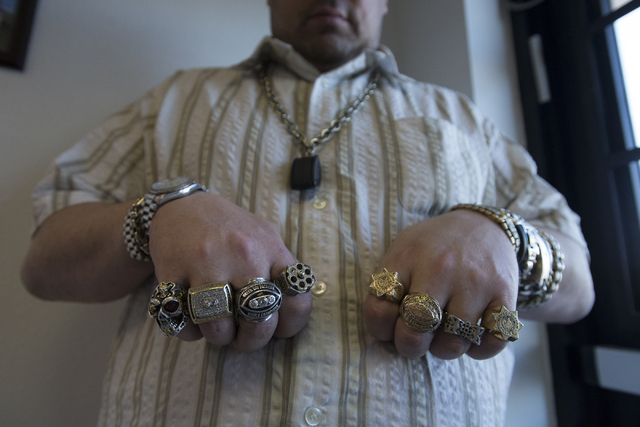 Owner of Nevada Coin Mart Neil Sackmary shows off his rings at his store in Las Vegas June 23. Bridget Bennett/View

There are over 580,000 valuable jewelry and collectible items to see at Nevada Coin Mart, and 90 percent of them are not for sale.

Historical artifacts, precious stones and metals decorate every wall of Neil Sackmary’s 4,000-square-foot store. Nevada Coin Mart, 4065 S. Jones Blvd., opened last September. In that time, no one has managed to talk Sackmary into selling any part of his collection. The 42-year-old said that’s not the point of his displays.

Instead, his personal collection is meant to show potential sellers the care and devotion he has for the items.

Nevada Coin Mart buys currency, jewelry and collectible items. To Sackmary, not all that glitters is gold.

He owns original wooden Native American statues from the 1940s show “Howdy Doody,” handmade for him by members of the Navajo tribe, and a full-size Big Bird from “Sesame Street,” made by a former Las Vegas artist who trained under Jim Henson. People who come in walk around the display cases and take pictures while they wait.

Sackmary said not only does his collection add ambience and character to his store, but there is a lot to learn from it.

He especially admires his Hopi tribe kachina dolls handcarved out of a single piece of wood. He thinks they must have required a vast amount of skill and craftsmanship.

“When you’re looking at some of these pieces, you are actually getting a piece of history because these have stood the test of time because … we can appreciate what they are,” Sackmary said.

Among some of Sackmary’s most treasured items are large pieces of blue turquoise from Black Mountain mine and black opal. While they are expensive, Sackmary said what makes them stand out are the stories behind how he acquired them.

“The guy came into store with the opal inside a briefcase handcuffed to his hand and a security guy before he sold it,” Sackmary said. “The guy that came in with a turquoise had stone-cold killer eyes. A friend recommended him to Nevada Coin Mart. He said he and his wife have kept the turquoise hidden underneath their bed for 30 years and never talked about it.”

Sackmary also wears part of his collection on him at all times. His hands, arms and neck are adorned with rings, bracelets and necklaces.

Not all customers who come into Nevada Coin Mart end up selling their valuables to Sackmary, and that was almost the case with one of his bracelets. Sackmary remembers the man that sold him his Chrome Hearts bracelet did not close the deal until Sackmary promised him that he would not melt the bracelet down.

“The thing is, a lot of people in my business play funny games,” Sackmary said. “I gave him the best offer in town, and I said that I wouldn’t melt. For some people, it’s not about the money.”

The few items that can be purchased at the store are coins, currency and bullions enclosed in two small cases. This part of the store is where 42-year-old Dominic D’Attili specializes. He has worked in the store for six months, but his experience extends beyond that.

“I was always a stamp collector and I always collected anything that was different,” D’Attili said.

Instead of giving his children a typical allowance, D’Attili figured that he would give his silver coins to them. His kids become interested in the hobby and even bought books to store their coins in.

“Being a dad, they had questions and I had to know the answer,” D’Attili said. “It really pushed me into getting into business, and I thought it was really lucrative once you really know what you are doing.”

D’Attili shares his vast knowledge with his customers and takes the time to teach them the value of the currency they bring in to sell or the items they are interested in buying. His job is to educate, he said.

However, when his customers bring in items of little value, D’Attili recommends that they keep it and give to a child instead, in hope of making a new generation of coin collectors.

“You will see their faces light up,” D’Attili told a seller who took his advice.