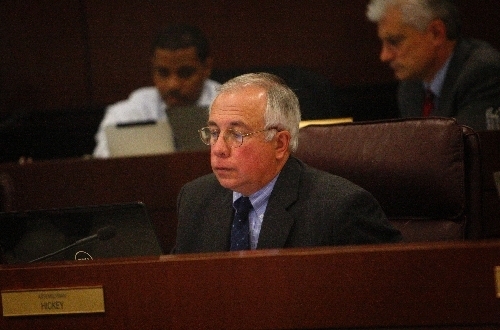 CARSON CITY — Assembly Minority Leader Pat Hickey, R-Reno, has come under fire this week, including from Sen. Dean Heller, for making comments that may have been factually correct but are unwise in today’s political world.

During a Tuesday appearance on a Reno radio talk show, Hickey said Republicans in Nevada may pick up seats in next year’s election because many minorities and young people don’t vote in non-presidential elections.

“Probably where we had a million voters turn out in 2012, we’ll have like 700,000,” Hickey told radio station KOH. “A lot of minorities and a lot of younger people will not turn out in a non-presidential (year). It’s a great year for Republicans.”

Democrats have a 97,000 voter registration advantage over Republicans and control the state Senate, 11-10, and Assembly, 27-15.

Heller, R-Nev., in a statement Thursday called the assemblyman’s comments “divisive, insensitive, and run counter to the basic duties and honor of public service. Assemblyman Hickey should know that it is a privilege to represent Nevada’s many cultures and ethnicities.”

Heller stopped short of calling for Hickey to resign his leadership post. Earlier this week conservative political strategist Chuck Muth said the legislator should quit for his “dumb ass comments,” and there had been a move in June by more conservative members of the Assembly Republican Caucus to replace Hickey.

“It was not my intention to, but I did misspeak, plain and simple,” he wrote.

But when interviewed Wednesday, the former news reporter made no apology. He said his background in the news business may have been why he was so frank.

“I was speaking about historical facts,” he said Wednesday. “But we are going after the votes of black people and Hispanics. We aren’t giving up on them even though they traditionally vote Democrat. We feel encouraged to have Brian Sandoval (Nevada’s first Hispanic governor) at the top of our ticket.”

David Damore, a political science professor at UNLV, said Thursday that Hickey’s comments about low turnout in non-presidential years helping Republicans is accurate. Hickey’s gaffe was not saying Republicans would win because of better candidates but because of the lack of participation by the young and minorities who traditionally vote Democrat, he said.

State Democratic Party spokesman Zach Hudson said the comments about low voter turnout in non-presidential years were true, but Hickey’s thinking that it is “great” if some minorities and young people don’t vote was “insulting and out-of-touch.”

There are no Republican Hispanic or African-Americans legislators. Hickey’s Assembly caucus is 13 white men and two white women.

Hickey said he was angered by the implication that he must be a racist who opposes minorities.

“Anyone who thinks I have a problem with minorities should look at my household,” he said.

Hickey is married to a Korean woman, and they have four children.

Hudson said no one is implying Hickey is a racist.

“What we are saying is he said it’s ‘great’ for Republicans if minorities and young people don’t vote,” he said. “They know the only way they can win an election is for as few people to vote as possible.”