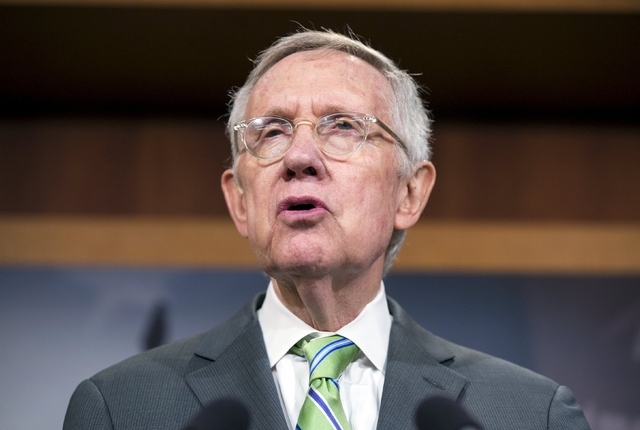 WASHINGTON — President Obama’s nomination of federal Judge Merrick Garland for the U. S. Supreme Court did nothing Wednesday to change positions staked out earlier by members of Nevada’s congressional delegation.

Senate Democratic leader Harry Reid again pushed for a regular confirmation process, Republican Sen. Dean Heller repeated his support for his leadership’s strategy to block the nomination until after the election, and Republican Rep. and Senate hopeful Joe Heck urged both sides to move on and look for common ground on other issues.

Reid, who for weeks has used his leadership time on the Senate floor to heap criticism on Republicans for their no-meeting-no-hearing-no-vote strategy, hit that theme again after attending the White House announcement along with other top Democrats.

“The Senate should do its constitutional duty and provide this good man with a fair and open confirmation process,” he said in a written statement.

“The American people expect nothing else.”

As he has done previously, Reid also linked the Republicans’ strategy to Donald Trump, the current front-runner for their party’s presidential nomination who also has called for Garland’s nomination to be blocked.

“Republicans now face a choice between blindly taking their marching orders from Donald Trump or doing their jobs and providing fair consideration to this highly qualified nominee,” Reid said.

“I am optimistic that cooler heads will prevail, and sensible Republicans will provide Judge Garland with the fair treatment that a man of his stature and qualifications deserves.”

Later in the day he predicted Republican leaders will cave, noting that not all of their members were on board with their approach.

One example of that was Maine Republican Sen. Susan Collins, who remained open to a courtesy visit with Garland.

“The White House has requested that I meet with him, and I look forward to doing so, as has been my practice with all Supreme Court nominees,” Collins said in a statement.

As Reid continued to beat the drum for confirmation over the past weeks, he has conceded that he cannot do much else to force a vote and has vowed not to try and shut down the Senate in response to what he describes as Republican obstructionism.

Now that Obama has gone public with his choice, the White House can do more to take the lead on the matter, especially given Garland’s record as a moderate on the bench.

Private organizations on both sides also are expected to play a huge role.

If such a protracted public fight concerned Republican leaders, they did not show it as they announced again that Garland’s nomination would not be confirmed.

“I’ve been clear that I believe the American people deserve the opportunity to have their voice heard in selecting the next Supreme Court justice,” he said in a written statement.

“And when the people make that choice, I’m ready to proceed.”

In his written statement, Heck said Obama has exercised his power to nominate a replacement for the late Justice Antonin Scalia, and the Senate is exercising its “advice and consent” power.

“We are in the middle of a heated presidential campaign and multiple Senate campaigns that will decide the next majority,” he said.

“With the president and the Senate so clearly divided, instead of fighting over an issue on which they cannot agree, their time would be better spent finding common ground on issues like our economy and national security.”

Even though House members have no formal role in the confirmation process, Rep. Dina Titus issued a statement echoing those of Senate Democrats.

“With important decisions on immigration, labor, and women’s health care coming down the pike, the U.S. Supreme Court should not be hamstrung by vacancies driven by election season politics. Our nation deserves better than that,” she said.

“Since nobody knows who will control the next administration or the Senate in 2017, I strongly encourage my colleagues to act on the president’s nomination while Republicans still have control of the chamber.”