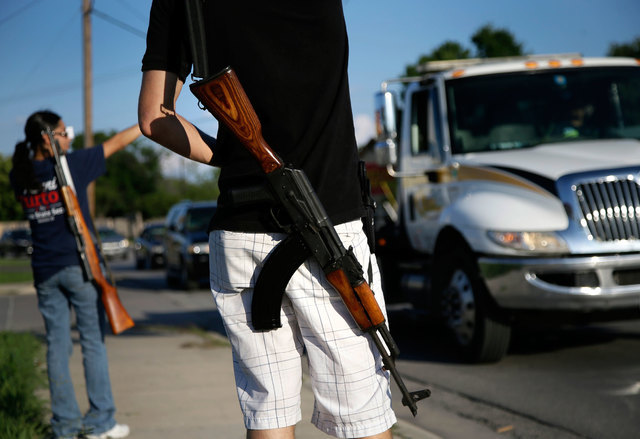 Kory Watkins, front, coordinator for Open Carry Tarrant County, carries his Romanian AK 47 over his shoulder as he and his wife Janie, rear, along with others, gather for a demonstration in Haltom City, Texas, on May 29, 2014. Companies, customers and others critical of Texas gun rights advocates who have brought military-style assault rifles into businesses as part of demonstrations supporting "open carry" gun rights now have a surprising ally: the National Rifle Association. The group's lobbying arm, the Institute for Legislative Action, has called the demonstrations counterproductive to promoting gun rights, scary and "downright weird." (AP Photo/Tony Gutierrez, file) 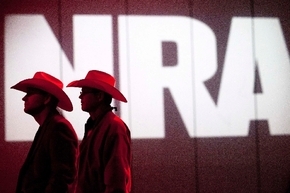 NRA members listen to speakers during the NRA convention on Saturday in Houston. National Rifle Association leaders told members Saturday that the fight against gun control legislation is far from over.

The National Rifle Association on Wednesday announced the appointment of a veteran campaign manager to handle its grassroots campaign to defeat a Nevada ballot measure that would expand firearm background checks to private sales and transfers.

“Robert’s proven ability to mobilize supporters on the ground will be the key to defeating the flawed gun control initiative and stopping the Californication of Nevada’s gun rights,” NRA spokeswoman Catherine Mortenen said.

Uithoven, a Reno native, has been active in Nevada grassroots politics for 25 years and has led many successful local and statewide campaigns.

“The out-of-state gun control groups funding this flawed initiative will spend whatever it takes to drown out the voices of freedom loving Nevadans,” Uithoven said in a prepared statement. “It is my job to ensure that they do not succeed. I am confident that when voters learn the truth about the flawed gun control initiative, Question 1 will be soundly defeated.”

Uithoven was not available to provide further details about what his campaign will look like, but the group is getting a late start compared to their opponents.

Nevadans for Background Checks, along with its national partners Everytown for Gun Safety, have been actively campaigning since last year. The Las Vegas Review-Journal observed an outreach event at a local church in March, for example, and those meetings with faith groups have been going on since at least last summer.