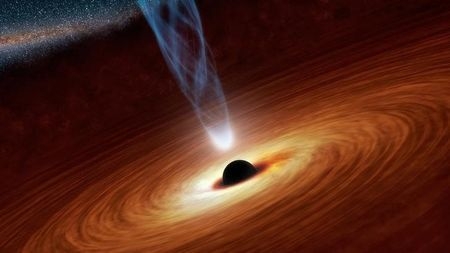 An artist's illustration shows a supermassive black hole with millions to billions times the mass of our sun at the center, surrounded by matter flowing onto the black hole in what is termed an accretion disk in this NASA illustration released on Feb. 27, 2013. (Reuters/NASA/JPL-Caltech/Handout)

Researchers in China have spotted a supermassive black hole, which they say is 12 billion times the size of the sun and formed around 900 million years after the Big Bang.

The black hole is larger than any of its age previously seen, the journal Nature reports.

A black hole is a dense region of space that has collapsed in on itself in a way that means nothing can escape it, not even light.

Releasing their findings in Nature, researchers led by teams from China’s Peking University and the University of Arizona said the black hole — named SDSS J010013.02 — was six times larger than its biggest known contemporaries.

Nature reported that lead researcher Xue-Bing Wu of Peking University and his colleagues first sighted the black hole using a telescope in Yunnan, China, and used additional telescopes around the world to examine it.

In a media release, the University of Arizona said that the black hole powered “the brightest quasar of the early universe.” NASA describes quasars as “the brilliant beacons of light that are powered by black holes feasting on captured material, and in the process, heating some of the matter to millions of degrees.”

Team member Fuyun Bian, from the Australian National University, said that the light from a quasar was thought to push back material behind it and limit the growth of black holes.

“However this black hole at the center of the quasar gained enormous mass in a short period of time,” Bian said.

Another researcher, Chris Willott, told Nature that a possible explanation could be that some black holes were formed by the collapse of a very large gas cloud — rather than that of a single star.

“We are still very uncertain as to the modes of black-hole formation and growth in the early Universe,” he told the journal.

Writing in Nature, astronomer Bram Venemans explains: “Theoretically, it is not implausible to find a black hole of more than 10 billion solar masses within 1 billion years after the Big Bang. But it is still surprising to uncover such a massive black hole in the early Universe.”

“This quasar is very unique,” the University of Arizona quoted lead researcher Wu as saying. “Just like the brightest lighthouse in the distant universe, its glowing light will help us to probe more about the early Universe.”