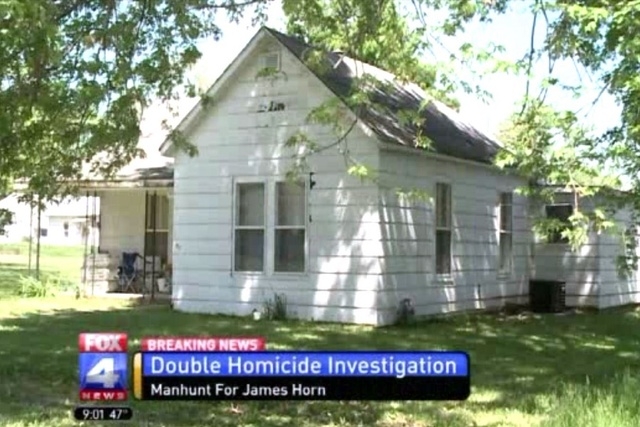 The victims were found when family members arrived home from their work. (Screengrab, WDAF)

A manhunt is on in Missouri after authorities say woman once held captive in a wooden box and her 17-year-old son were found murdered.

The suspect is 47-year-old James Barton Horn Jr. He is the former boyfriend of Sandra Sutton and has been charged with kidnapping, armed criminal action and unlawful use of a weapon for keeping her in a wooden box for approximately four months earlier this year in Sedalia.

Horn is not currently custody and police are searching for him in the Sedalia, Missouri area.

Horn’s home in Sedalia is one block from Whittier Alternative High School.

The school district’s superintendent said all outdoor activities at Sedalia School District #200 have been canceled until further notice.

This comes after Clinton police were called at 4:21 a.m. Thursday to a home located in the 700 block of East Franklin Street.

When officers arrived on the scene, they found 46-year-old Sandra Kay Sutton and her son, Zachary Wade Sutton, shot dead.

Police said they had been staying at the home with Sandra Sutton’s family. The victims were found when family members arrived home from their work.

He is 5’11” tall and weighs about 175 pounds. He has brown hair and brown eyes. He is known to frequent the Sedalia and Pettis County area. He should be considered armed and dangerous.

Clinton detectives are working at the crime scene with the assistance of the Missouri State Highway Patrol and the Henry County Sheriff’s Department.

If you or anyone that you know has any information about the crime or the location of Horn, please call the Clinton Police Department immediately at 660-885-2679.