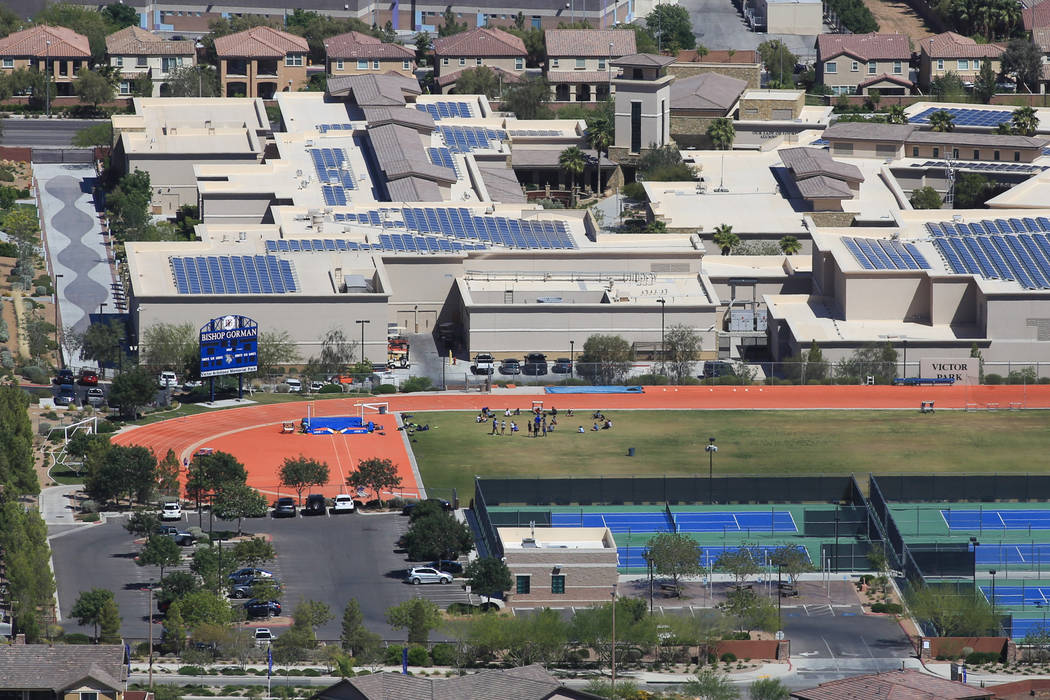 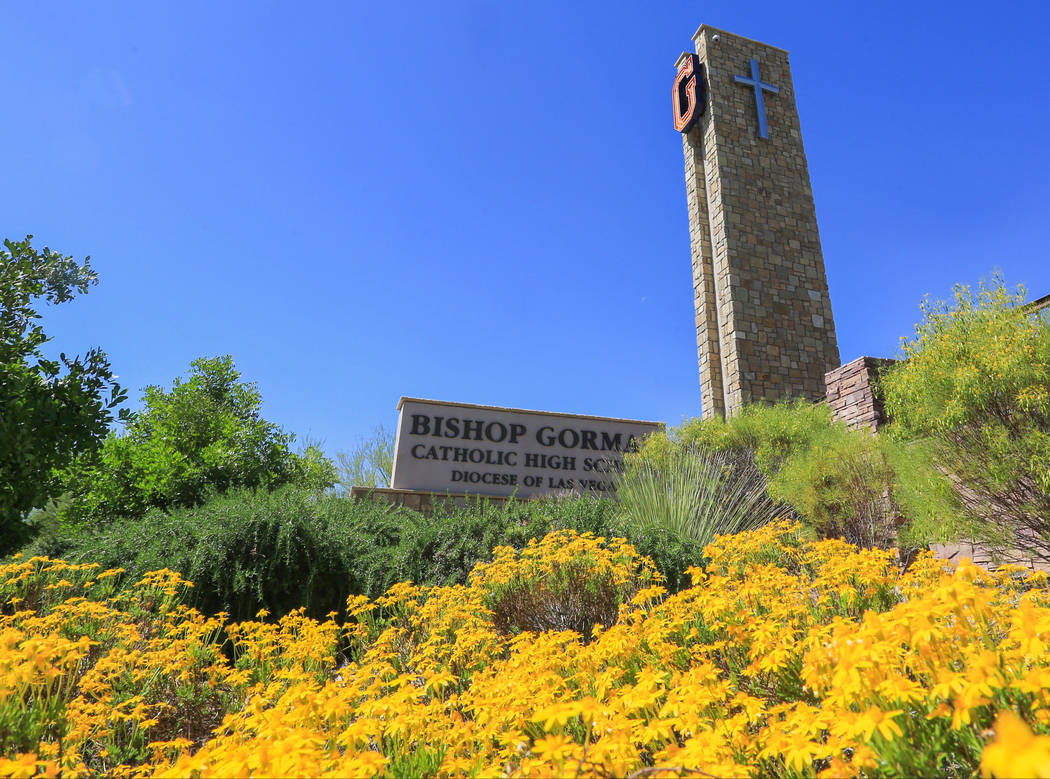 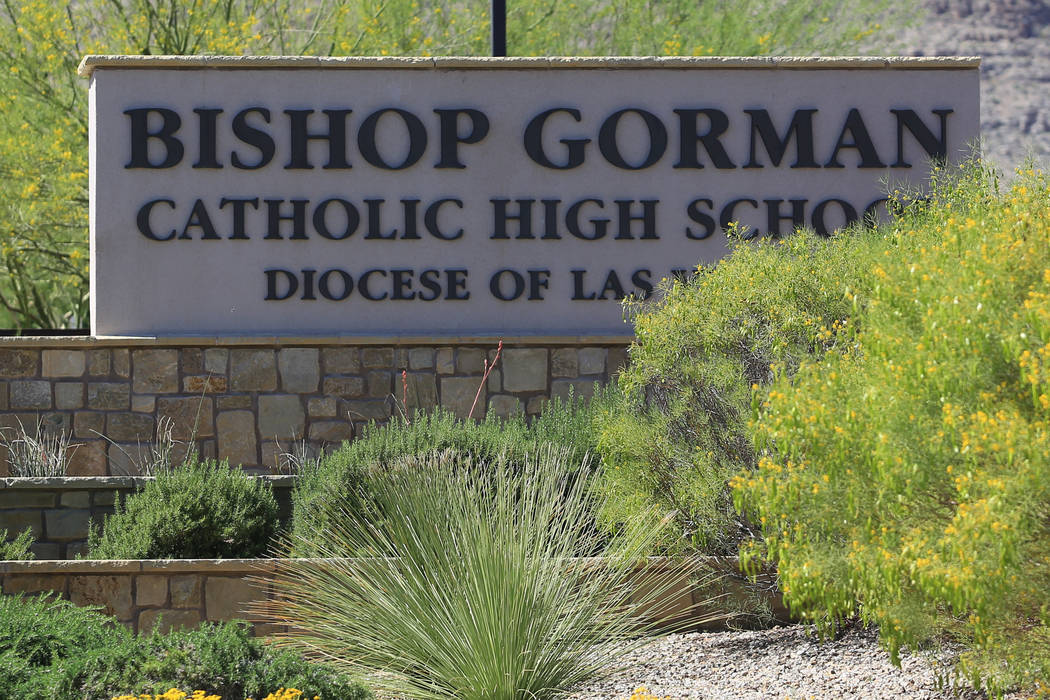 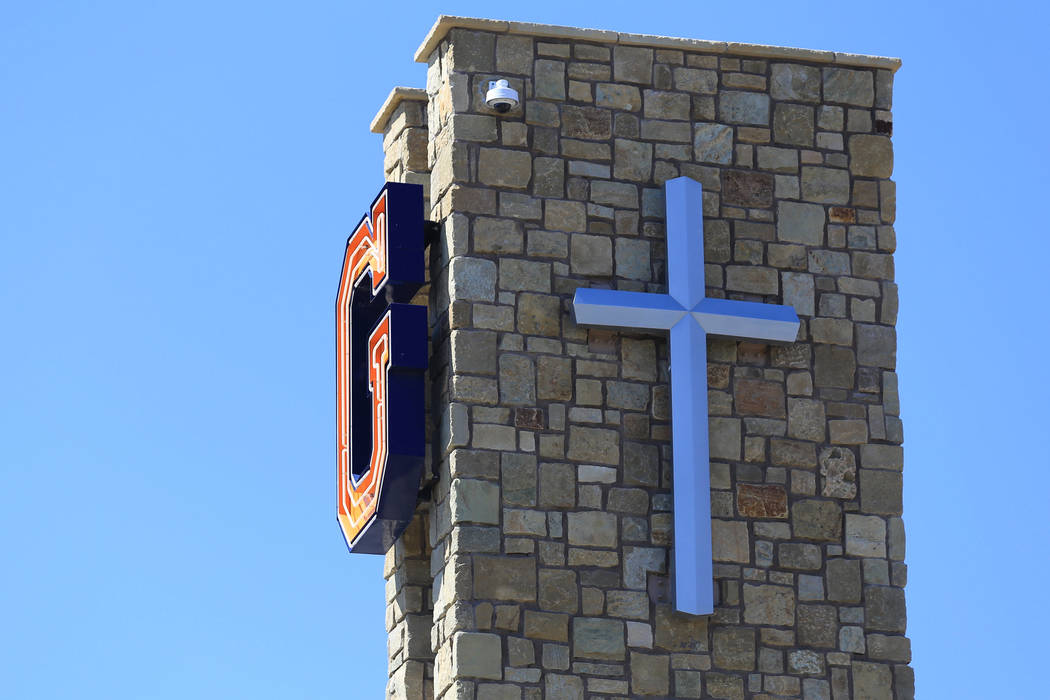 Even in bankruptcy filings, the landlord for Bishop Gorman High School continues to blame inability to pay construction costs for the private Catholic school’s new campus on the family that has been a longtime donor and who built the campus.

The other people listed with possible claims to the landlord’s debts include lawyers, accountants and a who’s who of Las Vegas donors and businesspeople.

Tiberti has since resigned from the board, landlord spokeswoman Rachel Wilkinson said.

State records list the Most Rev. Joseph Pepe, the bishop of Las Vegas, as president of the landlord; Deacon Aruna Silva, CFO for the Catholic Church’s Las Vegas district, as the landlord’s executive director and South Point casino and hotel owner Michael Gaughan as the nonprofit company’s secretary.

By listing the Tiberti debt and other claims in its paperwork, the landlord does not concede that the debt is valid and will get paid. That will unfold through bankruptcy proceedings.

The next highest potential debt is to Betty Engelstad, philanthropist and widow of casino developer Ralph Engelstad, whose total claim is listed at $775,000.

Its 2015 filing as a nonprofit to the federal government, the latest year available, showed the landlord had total end of year assets of about $129 million and end of year liabilities of $52 million. But 91 percent of those assets were land, buildings and equipment. The landlord had received $5.4 million in gifts, grants, contributions and membership fees.

Bankruptcy protection can be a negotiation tactic when faced with a debt a company disagrees with, said Adam Stein-Sapir of bankruptcy claim buyers Pioneer Funding Group, based in New York.

“They may want to pay a fraction of what they owe,” Stein-Sapir said. “Bankruptcy is still an extreme step.” 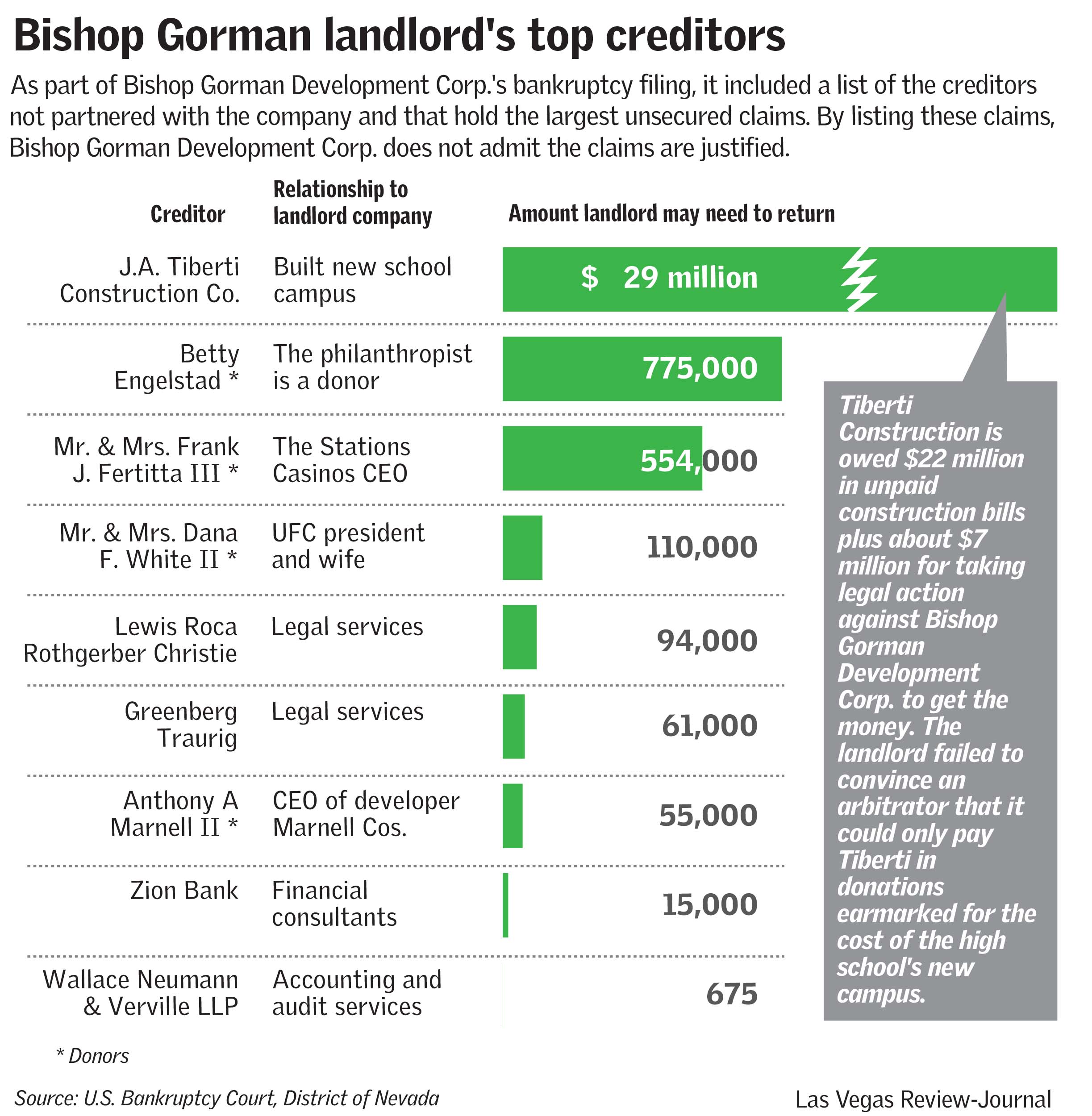 The landlord, Bishop Gorman Development Corp. — a partnership between leadership in the Catholic Church’s Las Vegas district and local business leaders — maintains that Tito Tiberti was not transparent about how much the project would eventually cost.

Tito Tiberti controlled the financial books of the landlord while running the construction project, the landlord states in its filings.

The filings describe the project as an “obsession” for Tiberti, one that eventually ballooned the project’s cost to $76 million in the name of preserving his “legacy.”

Earlier this week, Paul Hejmanowski, the attorney who represented Tiberti Construction during arbitration, said in a statement the landlord’s blame of the Tiberti family has offended the family.

On Wednesday, Hejmanowski said that Tiberti did not have total control over the campus project. Neither Tiberti or his brother, Renaldo, the current head of Tiberti Construction, could be reached for comment.

Any application for payment was signed by Tiberti Construction’s project manager and submitted in writing to the project’s architect, Bishop Gorman High School President John Kilduff and others, Hejmanowski said.

In the landlord’s version of events, the construction bills didn’t become a problem until Tito Tiberti left the family company in 2009, Silva said in a statement Wednesday.

In 2009, Renaldo Tiberti, a Bishop Gorman High School graduate, succeeded his brother Tito as head of the family’s construction company.

“We appreciate the long-standing relationship that we have had with the Tiberti family, and this is not the route we would have chosen,” Silva said in the statement. “It was not our decision, but rather that of the new management of Tiberti Construction to change our mutual understanding and course of business with them.”

By April 2010, the landlord had stopped paying Tiberti Construction for the campus.

Tiberti Construction succeeded in arbitration, arguing that the landlord should have paid as it received any money. The landlord failed in its argument that it should pay as it received money donated specifically for the campus costs.

The landlord, Bishop Gorman Development Corp., was formed in 2003 by school donors, supporters and leadership in the Catholic Church to help pay for the high school’s move from South Maryland Parkway to its current location on Hualapai Way.

Tiberti Construction and Bishop Gorman Development Corp. may have avoided any dispute over how to pay the construction bills if not for the Great Recession and deaths of key donors and figures in the construction, according to the original arbitration decision and depositions included with the bankruptcy filings.

Station Casinos founder Frank Fertitta Jr., whom Tito Tiberti named in a deposition as someone he wanted to contribute toward construction bills, died in 2009.

The poor economy scared other donors. As the economy tanked, Tito Tiberti maintained a record of how far the original budget construction had gone.

“Everything just seemed to be just completely crumbling around me,” Tito Tiberti described the recession in his deposition. “You could hardly swim up and keep your head above water.”

The project ballooned to $76 million, $22 million of which remains unpaid. An arbitration hearing in November raised that amount to $29 million once interest and lawyers fees were added.

The arbitrator who heard the case said Bishop Gorman Development Corp. had misinterpreted its contract, that the landlord should have used more loan money and proceeds from the sale of the old campus to pay off its debt to Tiberti Construction.

The landlord instead spent money that could have cut down the debt on donations to the Catholic Church, refinancing a bank loan and buying more land around the new campus, retired U.S. District Judge Philip Pro wrote in his arbitration decision.

As for Bishop Gorman Development Corp.’s Chapter 11 bankruptcy, the landlord has until June 1 to report the status of its reorganization to the U.S. Bankruptcy Judge August Landis.