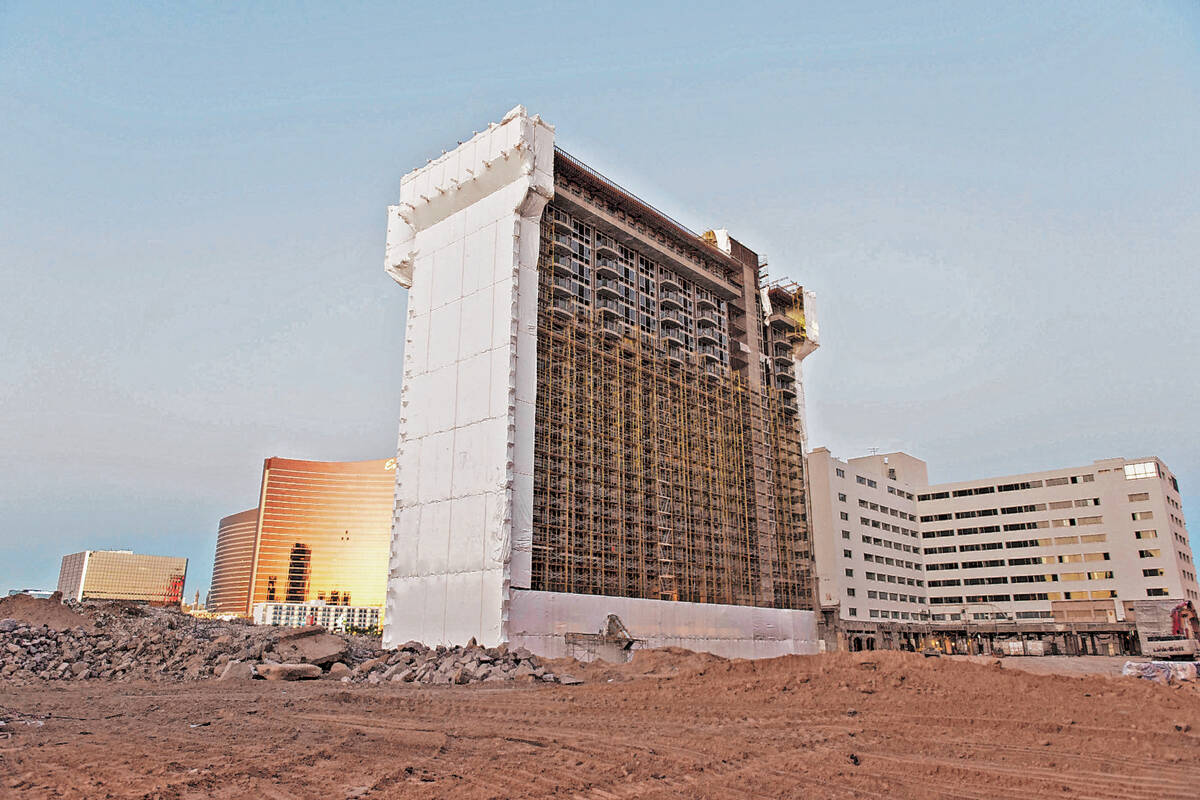 The books have been closed on the failed deal that would have brought a 50-story, 2,000-room resort next to the Fontainebleau Las Vegas.

Las Vegas Convention and Visitors Authority President and CEO Steve Hill delivered some closing remarks last week about the termination of the $120 million deal that once held a lot of promise for the Strip.

Chilean billionaire Claudio Fischer, a former commercial airline pilot who developed the Monticello casino resort near Santiago, Chile, and the Park Hyatt Mendoza hotel-casino in Argentina and has real estate holdings in Panama, was set to buy 10 acres where the Riviera once stood.

Fischer, who owns two airlines and a resort development company called Sun Dreams and once owned one of the largest salmon farms in the world, notified Hill in December that he couldn’t go ahead with the deal, though the deal gave him a long development runway. He wouldn’t have had to break ground on the project until Jan. 1, 2031.

Still, after seeing interest rates rise in the United States over the past year, Fischer couldn’t commit to signing the papers by the Dec. 15 deadline. Hill and the LVCVA gave Fischer plenty of latitude with contract extensions, but in the end, the deal died.

Fischer told SBCNoticias, a Spanish-language website, that he was discouraged by the Federal Reserve raising interest rates seven times last year to its highest level in more than a decade. The latest rate hike was 4.4 percent on Dec. 15.

The article said Fischer dreamt of building and operating a casino in Las Vegas since his father took him to Circus Circus when he was 4. The story indicated Fischer has not given up on trying to develop a resort in Las Vegas, and he hopes to reinitiate a future deal.

What happens next for LVCVA?

Hill told the board of directors that the 10 acres is back on the market.

He told me after the meeting that five or six groups have approached him about the acreage, one or two of which are local entities.

Fischer’s termination of the deal yielded some unexpected cash for the LVCVA. The agreement required him to pay the organization a $7 million cancellation fee if the deal wasn’t consummated.

While that unexpected windfall will help, it won’t fill the financial need the LVCVA needed from the proceeds of the sale. But fortunately, Hill and his team planned for the possibility of the deal falling through well in advance.

The $120 million expected from the sale was going to go toward securing bonds for the two-year, $600 million renovation project of the Las Vegas Convention Center, which is scheduled to start in April as soon as the giant ConExpo-Con/Ag construction equipment trade show ends.

Hill said the deal’s collapse won’t affect the start of the renovation because the organization dedicated around $55 million a year from fiscal year budgets toward the renovation to develop a pay-as-you-go system.

“We’re setting aside $55 million a year in pay-go money to help fund the $600 million,” he said. “That $55 million a year set aside is required to make this work this year and three more fiscal years into the future. We’ve been fortunate that our revenues have been better than expected recently, and our expenditures have been less than we’ve budgeted. We hope that trend continues because that certainly makes it easier. But regardless, we will make this renovation work over the next couple of years.”

Hill said those payments began in fiscal year 2018 but were paused during the pandemic years. They resumed last year as the LVCVA, through the same legislation that is financing the public portion of building Allegiant Stadium, has seen greater room tax revenue than anticipated.

That’s why the LVCVA is so diligent about monitoring average daily hotel and motel room rates and occupancy rates. While occupancy still hasn’t reached midweek pre-pandemic levels, room rates have been the highest in history with a record $209.89 a night averaged in October. The LVCVA collects room taxes on that occupancy, building the pot of money for Convention Center improvements and advertising the destination.

“We’re going to have to be careful watching the cost of construction, which is, at some level, out of our control, but also our expenditures as an organization,” Hill said.

The renovation will be important as Las Vegas continues to attract trade shows and conventions to the city. The $600 million targeted for the project will result in a new entrance to the building on the east side of the South Hall, new administrative offices and a new board room for LVCVA meetings, replacing the current under-sized meeting room that also will be away from the congested main entrances.

A climate-controlled entry that will provide access to the North and Central halls and look much like the beautiful $1 billion West Hall is planned. Technology and facility upgrades are scheduled all around and, through good planning, construction won’t affect a single major convention because work will stop when big shows are in town.

It’s too bad Las Vegas won’t get to enjoy whatever Claudio Fischer was going to bring to the city.

But at least his departure won’t create a big hole in the LVCVA’s renovation plans.