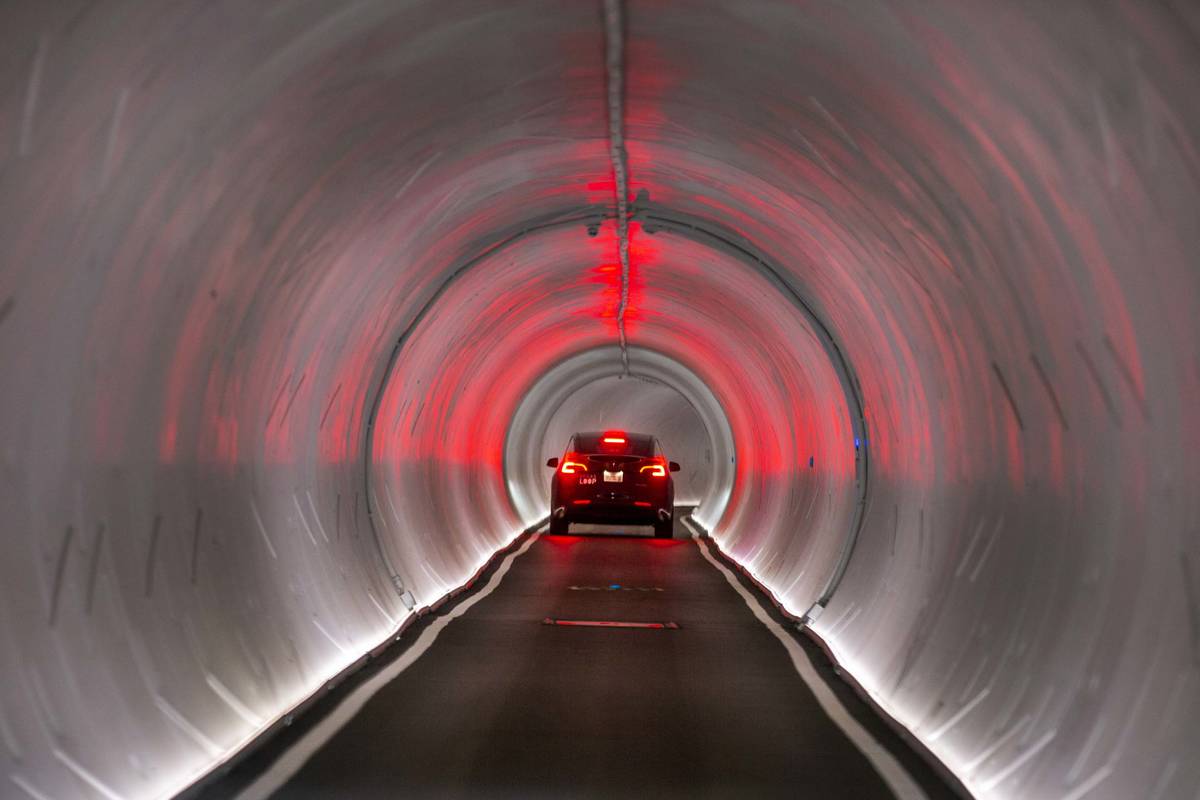 A Tesla is navigated from the West Hall to Central Hall in the Boring Company's Convention Center Loop World as the World of Concrete 2021 begins with the first show returning at the Las Vegas Convention Center on Tuesday, June 8, 2021, in Las Vegas. (L.E. Baskow/Las Vegas Review-Journal) @Left_Eye_Images 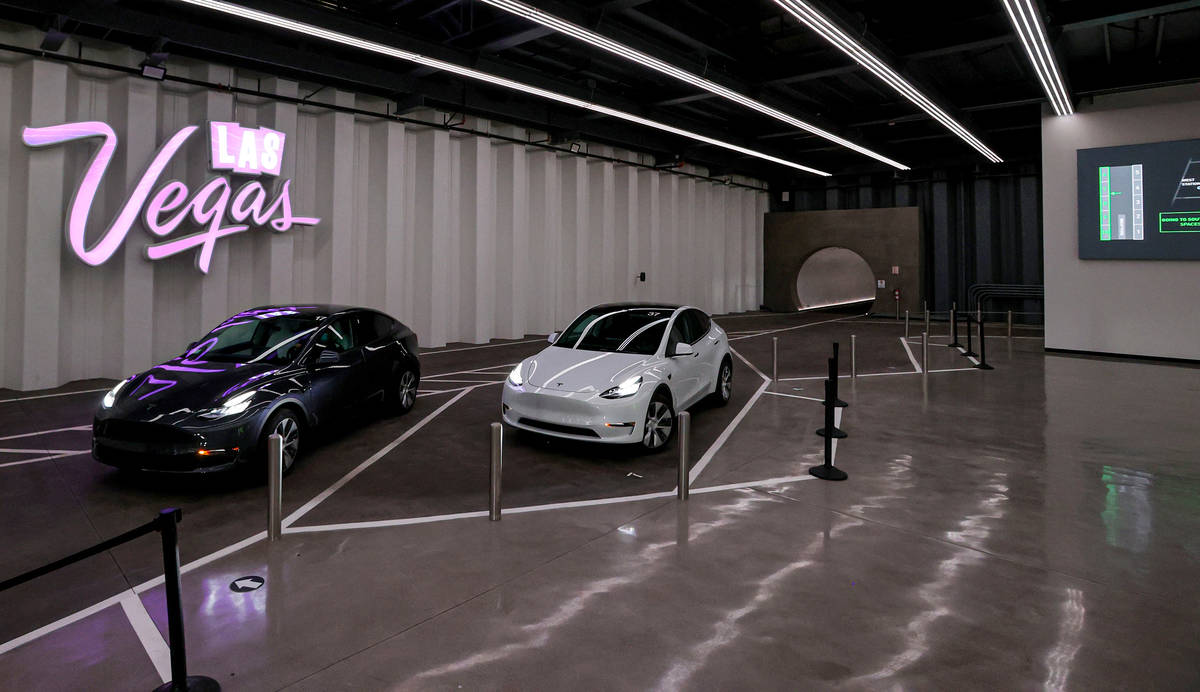 Judging from comments made at this month’s World of Concrete trade show, the Boring Co.’s $52.5 million underground people-mover is a big hit.

Who wouldn’t like driving through brightly lit, multicolored tunnels in a Tesla?

Because it’s new and not something one sees everyday, those who waited in the very light lines to get between the Central Hall and the West Hall in 100-degree heat during the show were jazzed by the whole thing.

Meanwhile, on the day World of Concrete opened, the Las Vegas Convention and Visitors Authority board of directors received a report on capacity tests for the system, and it passed but not by much.

Passage of the capacity test was important to Boring because the final payment for the system was based on completion of a successful test.

In the report to the board by Chief Financial Officer Ed Finger, it was concluded that during the test, the system handled 4,431 passengers per hour, barely surpassing the 4,400 passengers the Boring Co. had promised.

The test involved more than 300 recruited volunteers — off-duty LVCVA staff members and their families and UNLV students — to ride the 0.8-mile twin tunnels linking three stations for more than an hour straight.

During the tests, volunteers boarded vehicles and were driven to another station and unloaded, and then they reloaded a different vehicle in a simulation of conditions that would occur during a convention or trade show.

Using three different Tesla vehicle models — Model 3s and Model Y’s capable of carrying three passengers and Model X’s that could carry four passengers — the LVCVA determined that overall, 3.05 passengers per vehicle were carried during the tests, and an independent auditor monitored 157 unique rides during the test period. Monitors and auditors reported no negative findings.

While many seem happy about the way the system turned out, some remain skeptical. Las Vegas Mayor Carolyn Goodman, a member of the LVCVA board, hasn’t cast an affirmative vote for the system since it was introduced.

On social media, technology critics expressed concern over some shortcomings, with several bloggers producing videos critical of the system.

Daniel Cooper, senior editor of Engadget, a multilingual blog network focused on consumer electronics and gadgets, said he was underwhelmed by Boring’s effort. In a YouTube video he produced, Cooper said when reporters got their first look at the system, they found two tunnels “barely wide enough for a car with human-driven Tesla Model S’s.”

While the capacity test passed muster, the system faces a bigger test in the months ahead when tens of thousands of convention attendees come to town for the rescheduled National Association of Broadcasters trade show in October. Also coming will be the Men’s Apparel Guild in California fashion exhibition in August, the Specialty Equipment Market Association automotive aftermarket show in November and CES and World of Concrete in January.

Loading and unloading of Teslas under real convention conditions could be more time-consuming than the capacity test because it’s far easier and faster to get in and out of those cars over and over again when operators are dealing with testing participants who have experienced it and not conventioneers getting their first look at it.

The Boring Co. may have its work cut out for it to deliver everything initially promised, with the potential possibility of reduced capacity.

Boring first told the LVCVA it was going to develop high-capacity vehicles — something that could hold maybe 16 people per trip like a van. Instead, it got 62 Teslas.

LVCVA President and CEO Steve Hill said Boring paused in developing a high-capacity vehicle because of the pandemic, noting that you wouldn’t want to use high-capacity vehicles with COVID-19 all around. But that time seems to have passed; we’re getting back to the ways of pre-COVID rapidly.

Goodman, incidentally, isn’t even sure a high-capacity vehicle would fit in the extremely narrow tunnels or if passengers would be able to get out of them quickly in an emergency.

If capacity becomes an issue, it could result in lines of frustrated passengers who decide to abandon the people-mover and walk instead of wait.

World of Concrete was a great show, and Las Vegas should be grateful that it broke the ice on bringing conventions back to the city when it really needs them.

But it’s no CES. Or National Association of Broadcasters. Or SEMA. Delegates are shoulder to shoulder during those shows, and the system may not be able to keep up with the heavier traffic.

Another aspect of the people-mover that critics are assailing is the lack of autonomous operation as promised by Boring. We’re told that the Teslas eventually won’t have drivers, and if that happens, putting another passenger in the driver’s seat could bump up capacity substantially.

The Boring system extended out into the community should work just fine. It’ll be spread out enough that there shouldn’t be massive lines, except maybe in cases where large masses of people are going to one location at the same time, such as a football or hockey game. It will work like a glorified, underground Uber system with direct transport to the destination.

Boring needs to deliver on the promises it made when it designed the system; otherwise there’s a good chance that the colorful tunnels and its Teslas will seem more like a theme park ride than a legitimate transit system for conventioneers.