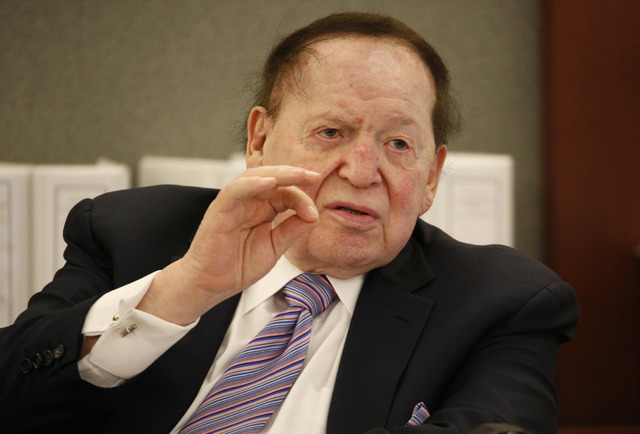 A bill in Congress that would ban Internet gambling would inadvertently criminalize Nevada’s booming mobile sports wagering business, which has been credited with turning the Silver State’s sports books into a $3.9 billion-a-year industry.

The measure, backed by Las Vegas Sands Corp. Chairman Sheldon Adelson, is aimed at reversing changes made in 2011 to the 1961 Federal Wire Act.

If approved, the bill would end most forms of online betting, including interactive poker in Nevada.

Because the bill would stop transmission of gambling information through wire communications across state lines, mobile sports wagering in Nevada would also be halted, crippling sports book operations in the state.

“While we don’t think this is the intent of the bill, we are concerned it could be an unintended consequence,” said William Hill U.S. CEO Joe Asher. The company, which operates race and sports books for Nevada casinos, operates a healthy mobile wagering business.

The Restoration of America’s Wire Act bill, sponsored by Rep. Jason Chaffetz, R-Utah, had a hearing in March before the House Judiciary crime subcommittee. The next step is a Judiciary Committee session in which the bill will be opened for amendment and votes. A similar bill is expected to be introduced in the Senate by Sen. Lindsey Graham, R-S.C.

A spokesman for Las Vegas Sands declined comment on the bill and its potential impact on mobile sports wagering.

The unintended consequences of the bill was discovered by Las Vegas gaming attorney Greg Gemignani, of the Las Vegas office of the law firm Dickinson Wright. Gemignani, who specializes in Internet gambling law, researched the bill last year and found several issues “that could backfire on some of our operators in Nevada.”

Gemignani said wireless phone transmissions in Nevada — including those used for mobile sports wagering — often travel through routers in Arizona, California or Utah because of the network topology and function. Under the bill, transmitting gambling information across those state lines, even when the transmissions originate and end in Nevada, would be illegal.

Nevada casinos accepted a record $3.9 billion in total sports wagers during 2014, an increase of 7.7 percent over 2013. The amount wagered on sports has increased annually in the previous five years.

The Gaming Control Board does not break out the amount wagered through mobile technology versus wagers placed inside casino sports books. However, several analysts believe mobile wagers are as much as 30 percent of the sports betting total handle.

Analysts credited technology improvements to sports betting, such as in-game betting in which wagers can be placed in the middle of a sporting event, with increasing the state’s gambling handle.

The advent of mobile sports wagering, allowing customers physically in Nevada to bet on a game or event through an application on a smartphone or tablet PC, has been credited as the leading advancement.

“There are thousands of Nevadans who bet sports on their mobile phone today in a highly regulated and appropriate fashion,” Asher said. “The idea that we would take away our customers’ ability to bet on their mobile phones, one of the key growth areas in the business, doesn’t make sense.”

Sports book operator CG Technology also offers mobile sports wagering products. The company manages the race and sports books for the Venetian and Palazzo, which are owned by Las Vegas Sands. A spokeswoman for the company declined comment on the bill.

Several observers suggested that if the Wire Act is restored, avenues would be available to address the various Nevada-centric issues at a later date.

Internet gambling has become a debate on federal versus state powers and the effectiveness of technologies employed to keep the games fair and limited to adults.

As a political and economic matter, casino companies and lottery providers view Internet gaming as a way to develop new revenue streams. However, others believe allowing Internet wagers would harm society.

Adelson, a billionaire who has influence with many Republican members of Congress, has vowed to spend whatever it takes to reinstate federal restrictions on Internet gambling. He says he views the activity as harmful to children and problem gamblers and is concerned the technology is not available to regulate the Internet.

Most of the major gaming companies, including MGM Resorts International and Caesars Entertainment Corp., are opposed to the Adelson bill. Caesars has legal online gaming operations in Nevada and New Jersey.