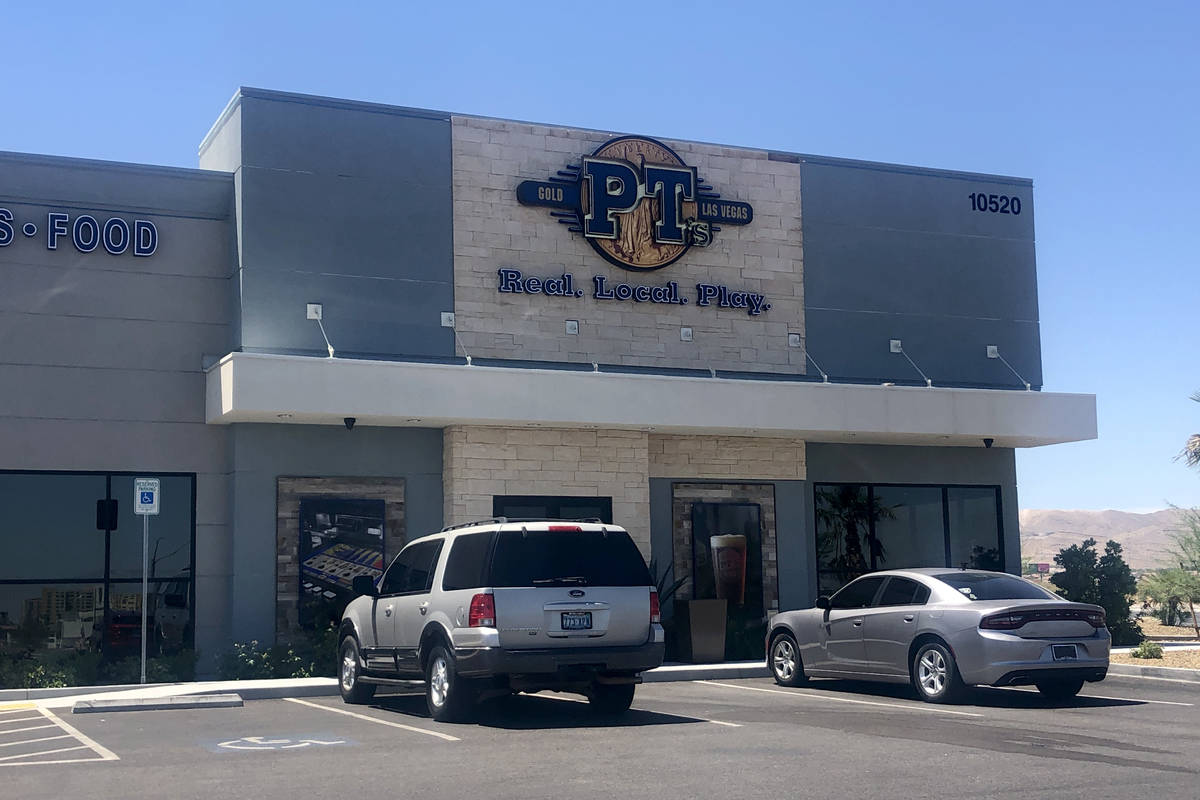 PT’s Gold bar at Cactus Avenue and Las Vegas Boulevard South was one of the few PT’s locations that reopened in late May. (Katelyn Newberg/Las Vegas Review-Journal)

The Strat is doing better than average when it comes to heads in beds.

In a conference call with investors, Las Vegas-based Golden Entertainment Inc. Chief Financial Officer Charles Protell said Thursday the Strat has maintained occupancy of around 50 percent to 55 percent with more than 90 percent on some weekends.

That compares to an average occupancy rate of 46.8 percent in September, according to the Las Vegas Convention and Visitors Authority.

Protell explained that it’s as much about what the Strat doesn’t have as what it does.

While the Top of the World continues to perform well as one of the top upper-scale restaurants in the valley, despite capacity limitations, the Strat has never had to worry about convention traffic, a concern experienced by its Strip peers.

“We understand there are properties closing,” Protell told investors. “I think that ultimately helps the Strat a little bit. But we’re pretty pleased that we’re doing two-thirds of cash flow that we did last quarter and it’s because the property has been heavy on (online travel agencies) as a traffic driver and not really reliant on direct large convention bookings. We do not have 300,000 square feet of convention space and less than 7 percent of the visitation and bookings at the Strat are international.”

The closure of Nevada bars July 10 through Sept. 20 drove the loss, even as business strengthened at its flagship Strat and locals casinos properties.

Golden operates the PT’s Pub franchise of taverns and the state’s mandated shut-down of bars from July 10 through Sept. 20 put a damper on bartop slot machine revenue for the quarter.

“Our third-quarter results demonstrate the continued strong operating trends at most of our properties since reopening as we generated the highest third-quarter adjusted cash flow in the company’s history,” Golden Chairman and CEO Blake Sartini said in a release announcing results.

Golden’s rural operations also are preparing for more business with snowbirds and RV dwellers arriving at the company’s camping destination in Pahrump.

Protell said the Lakeside Casino and RV Park in Pahrump is acknowledged as one of the state’s most popular camping resorts and 100 percent occupancy is the norm.

The company’s Laughlin operations are still hampered by social distancing restrictions at its outdoor entertainment venue where the company routinely stages popular entertainment acts when the weather cools.

Golden operates one of six casinos in the state, the Rocky Gap Casino Resort in Flintstone, Maryland, and the company expects to be a part of the process of developing sports wagering as a revenue source.

The company also announced Thursday that it repaid the remaining $10 million it had drawn from its $200 million revolving credit account during the quarter.